Contemporary Interpretation of Ducati's Legendary World Champion - No. 255 of 500 Produced 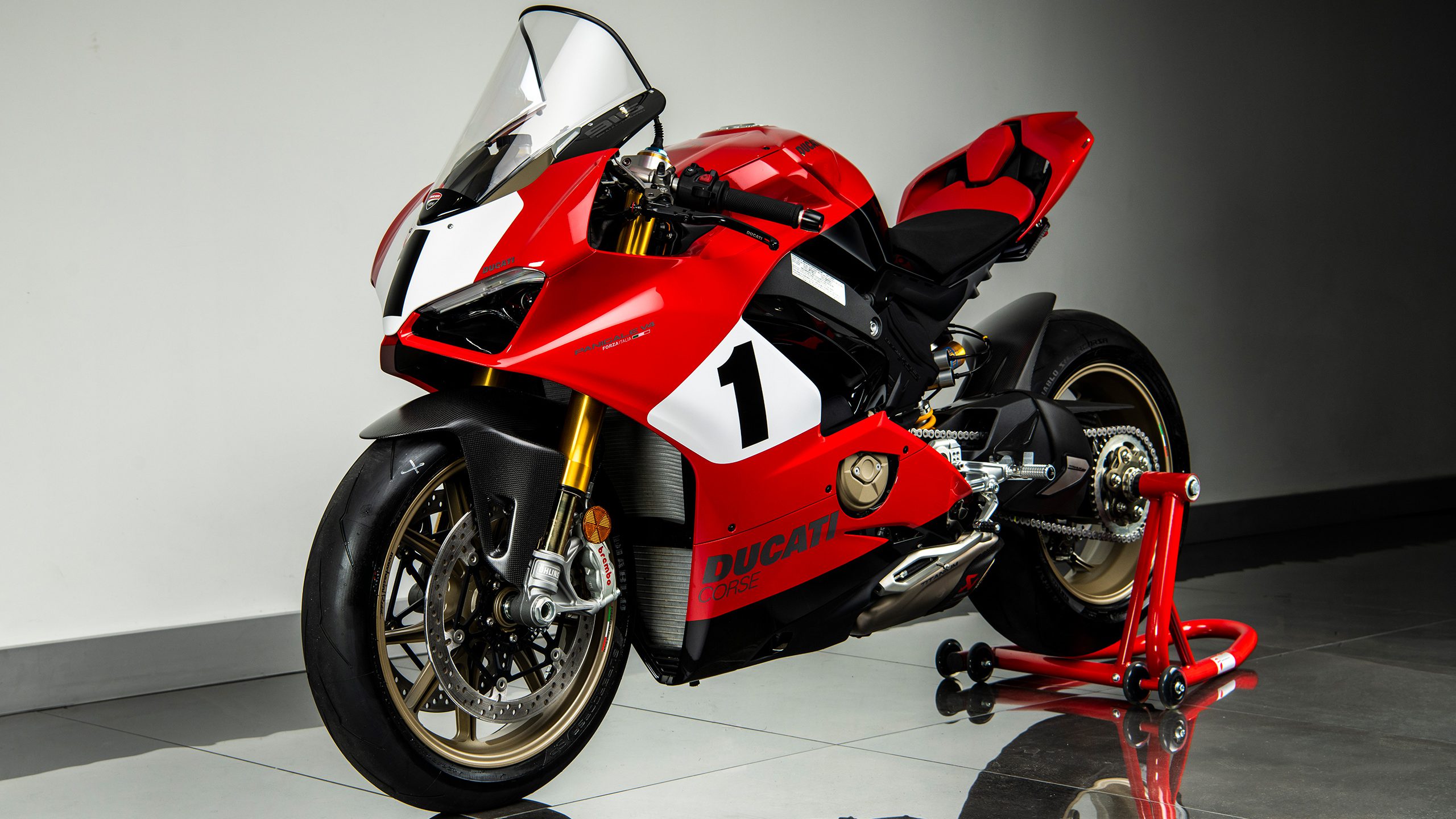 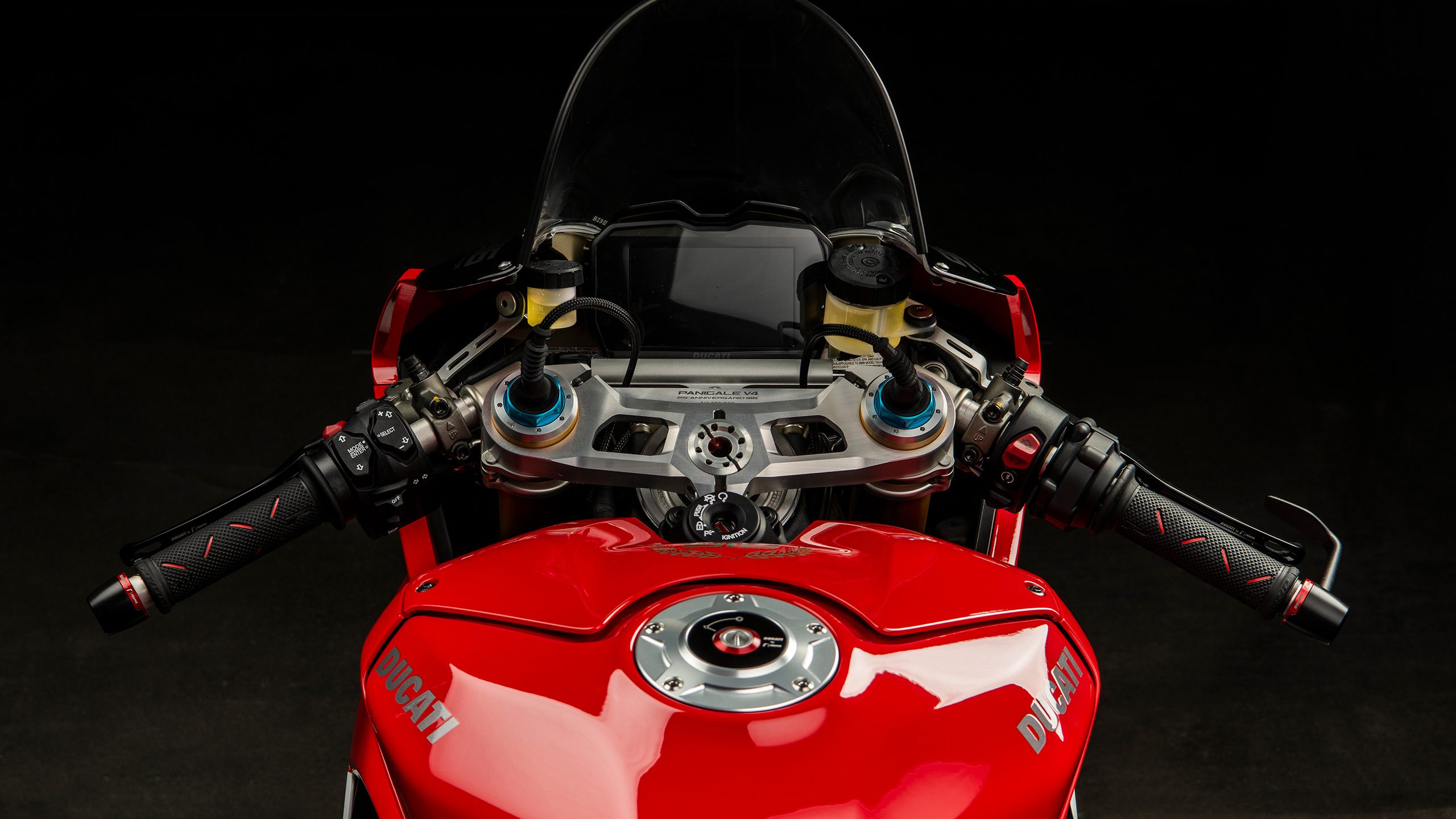 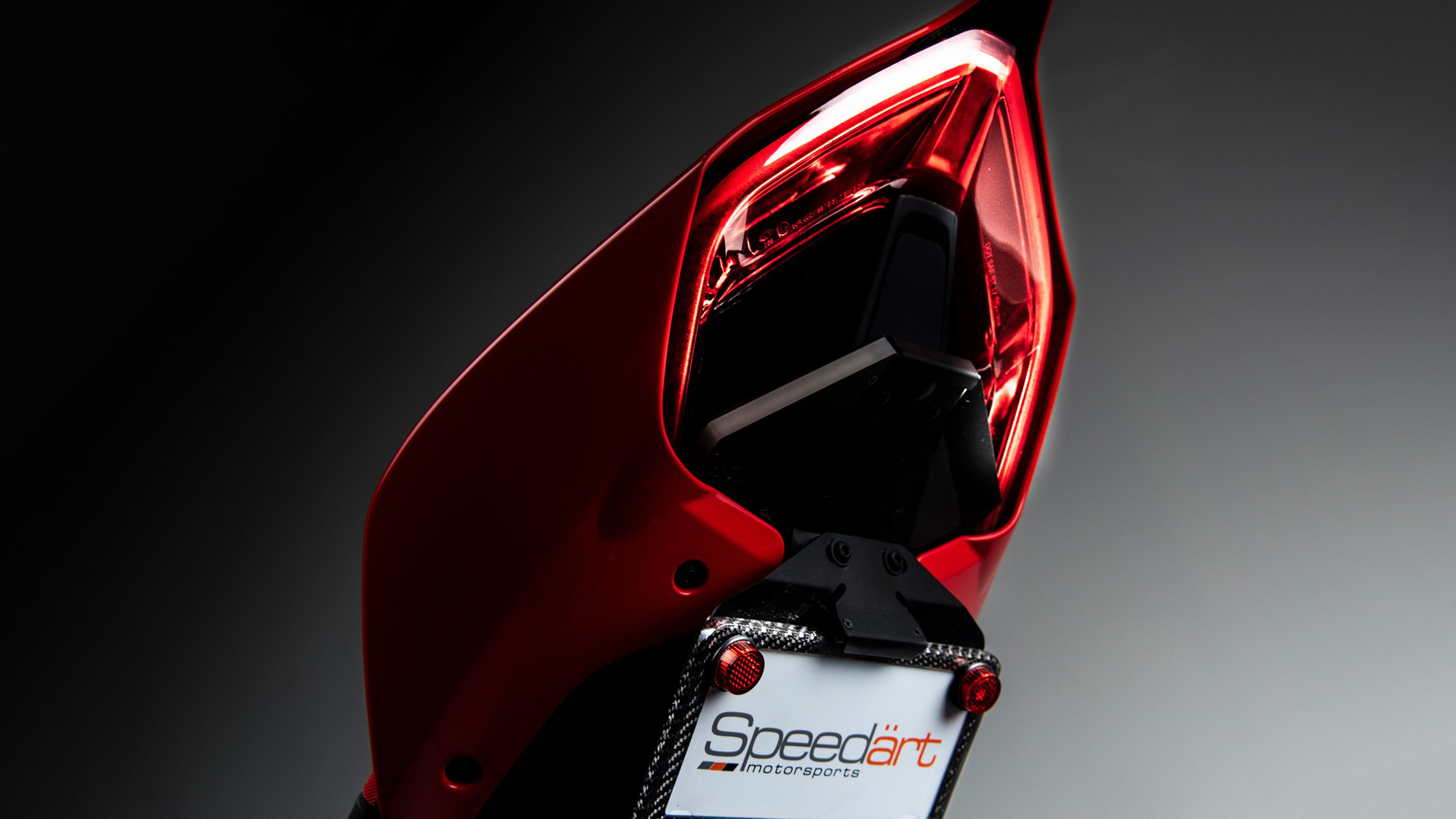 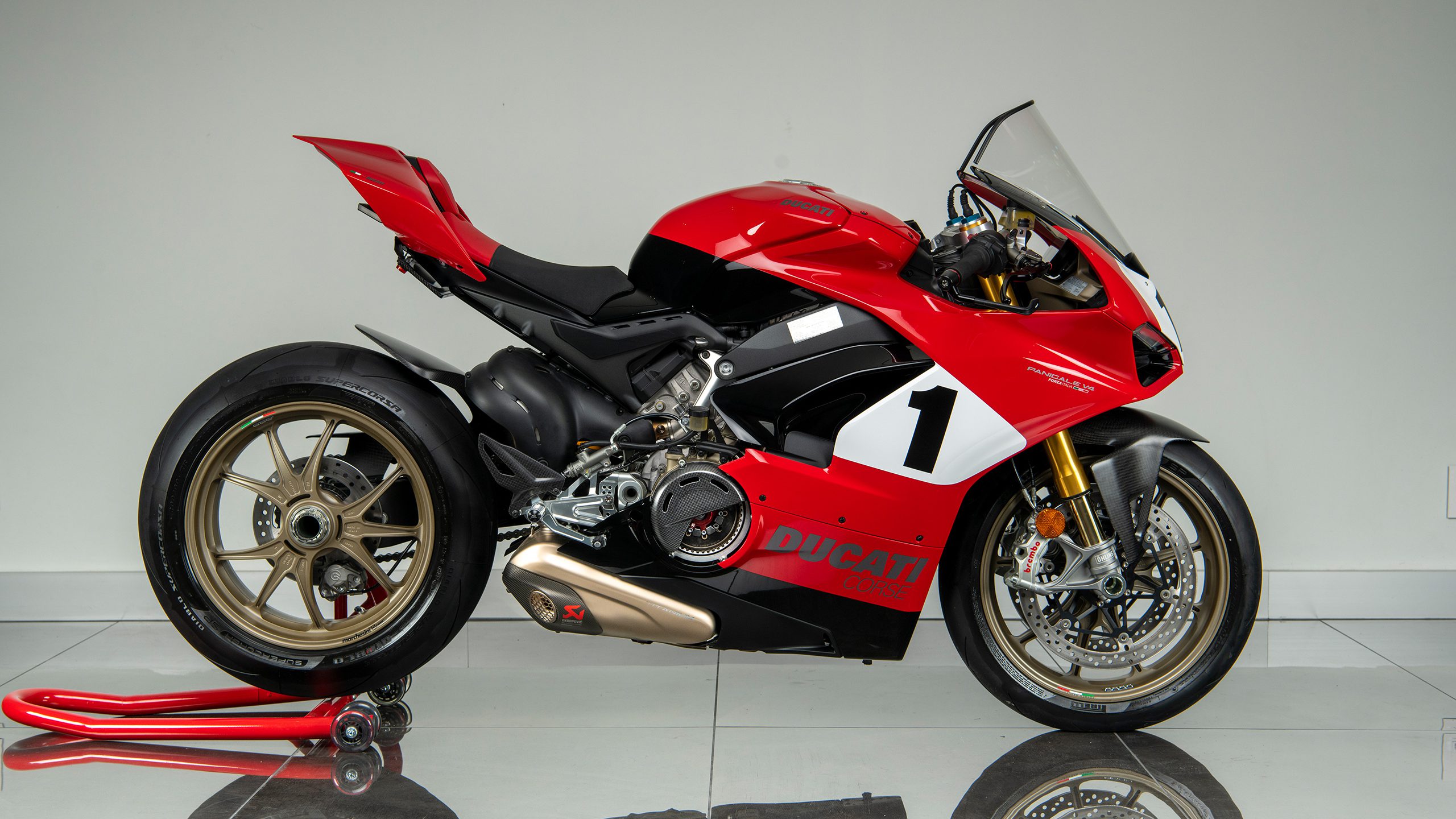 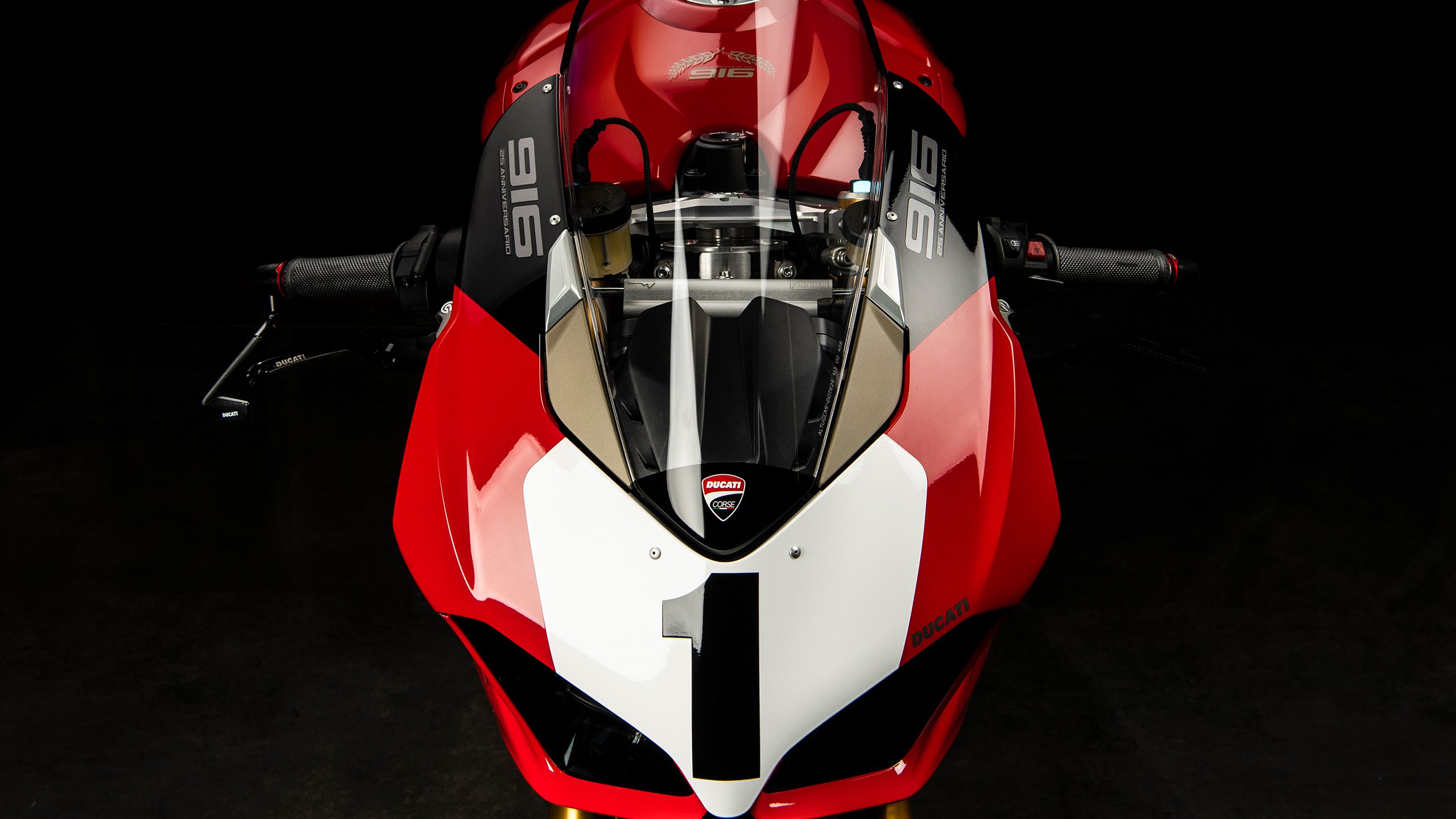 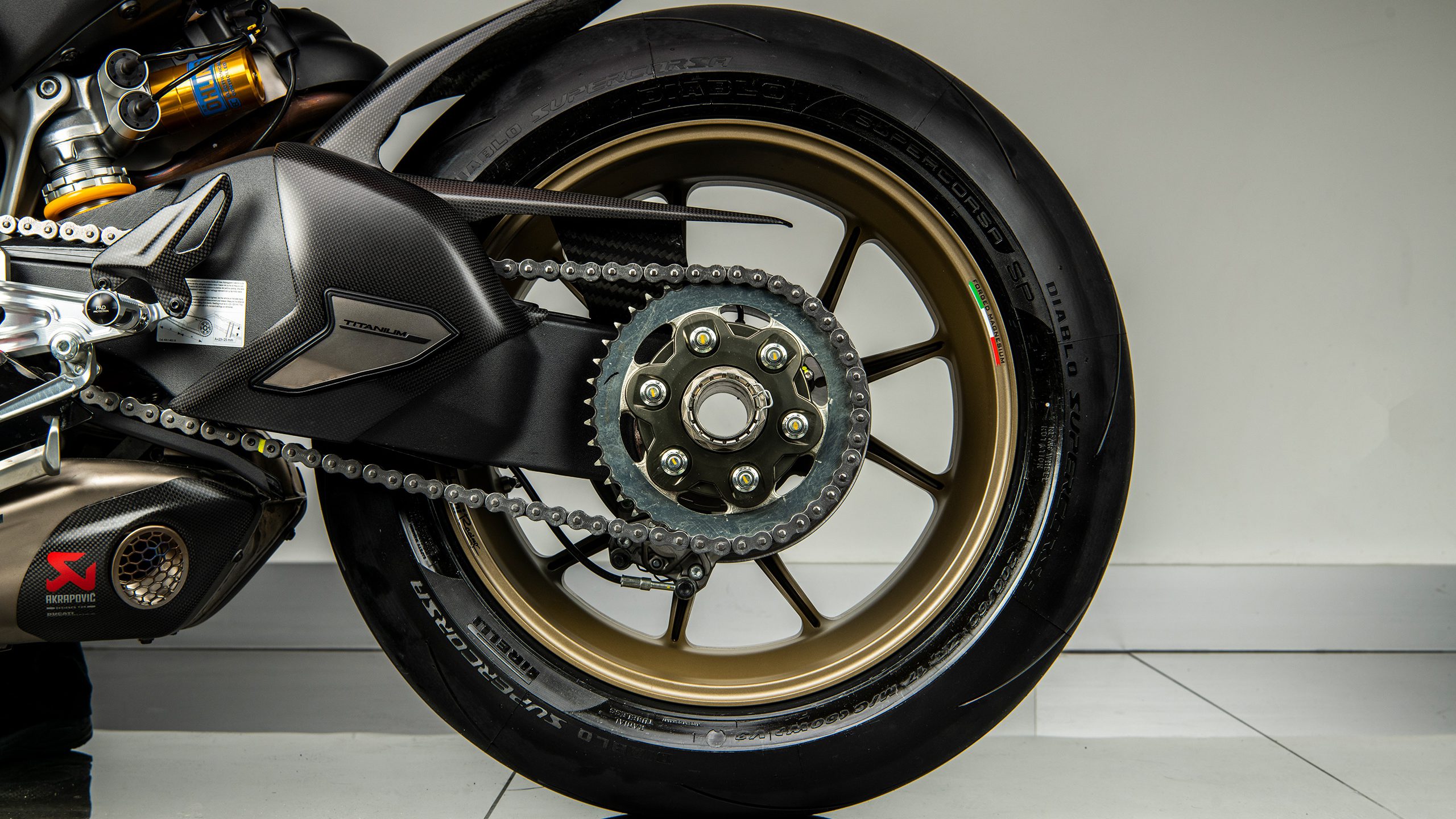 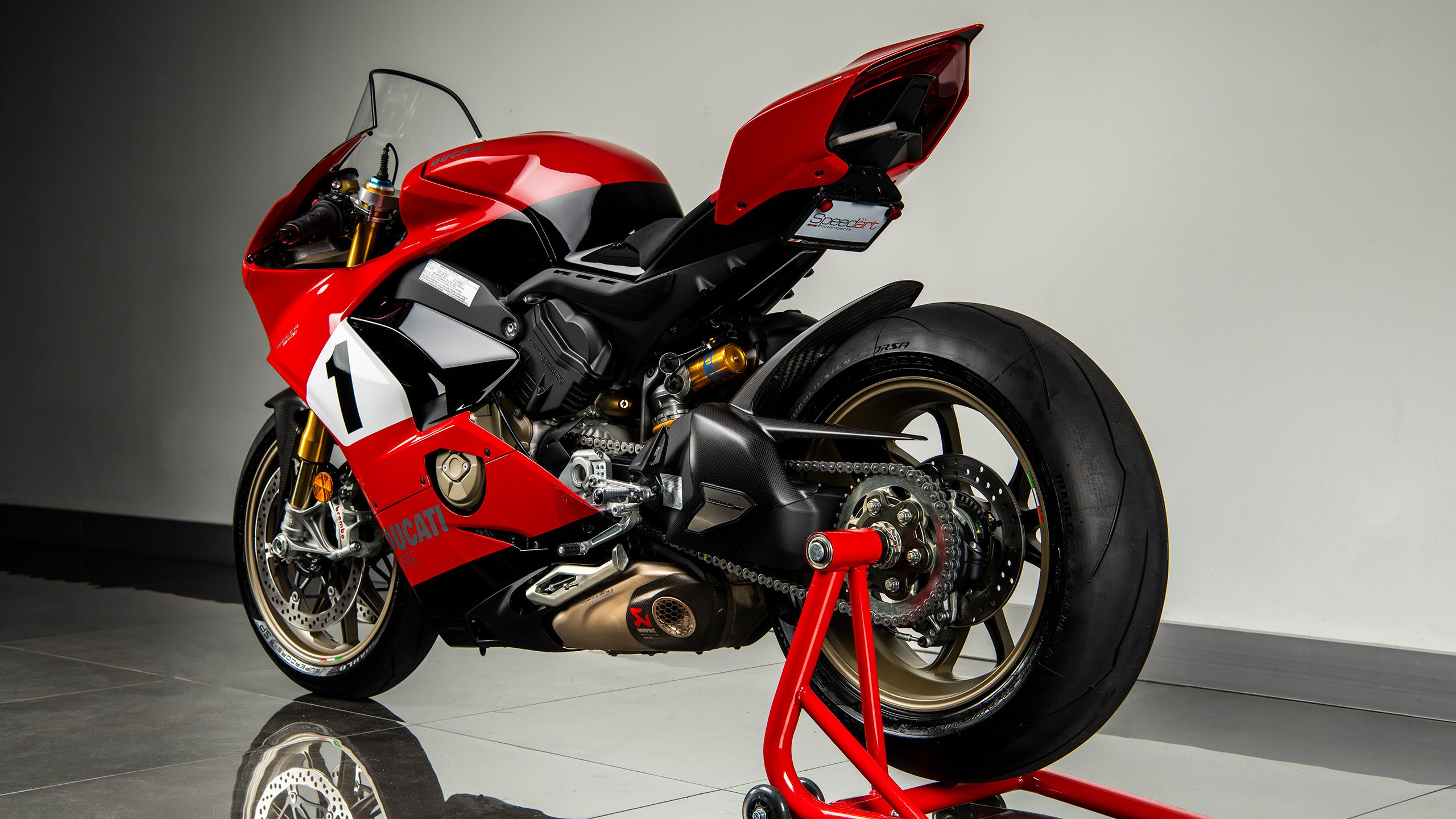 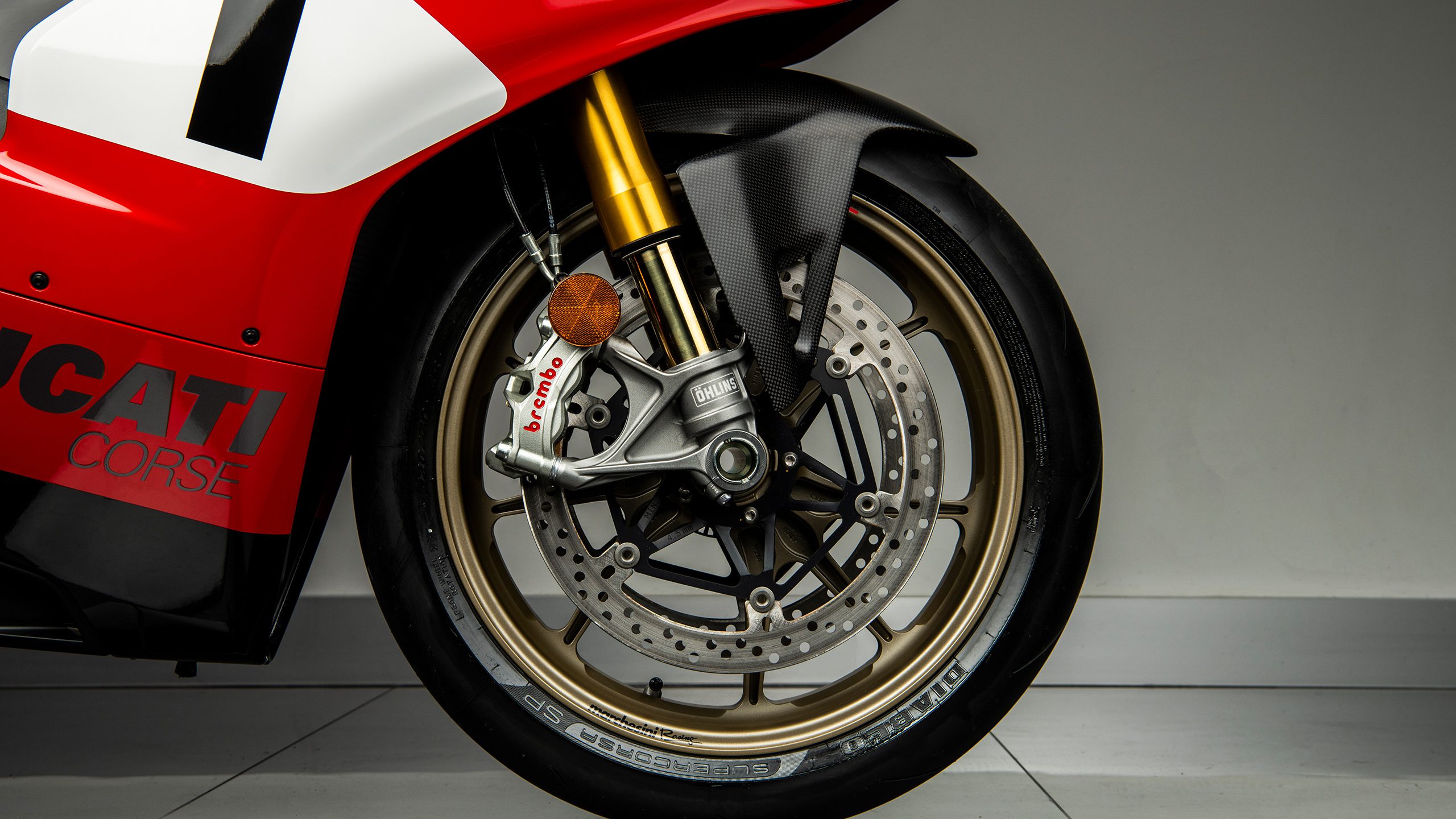 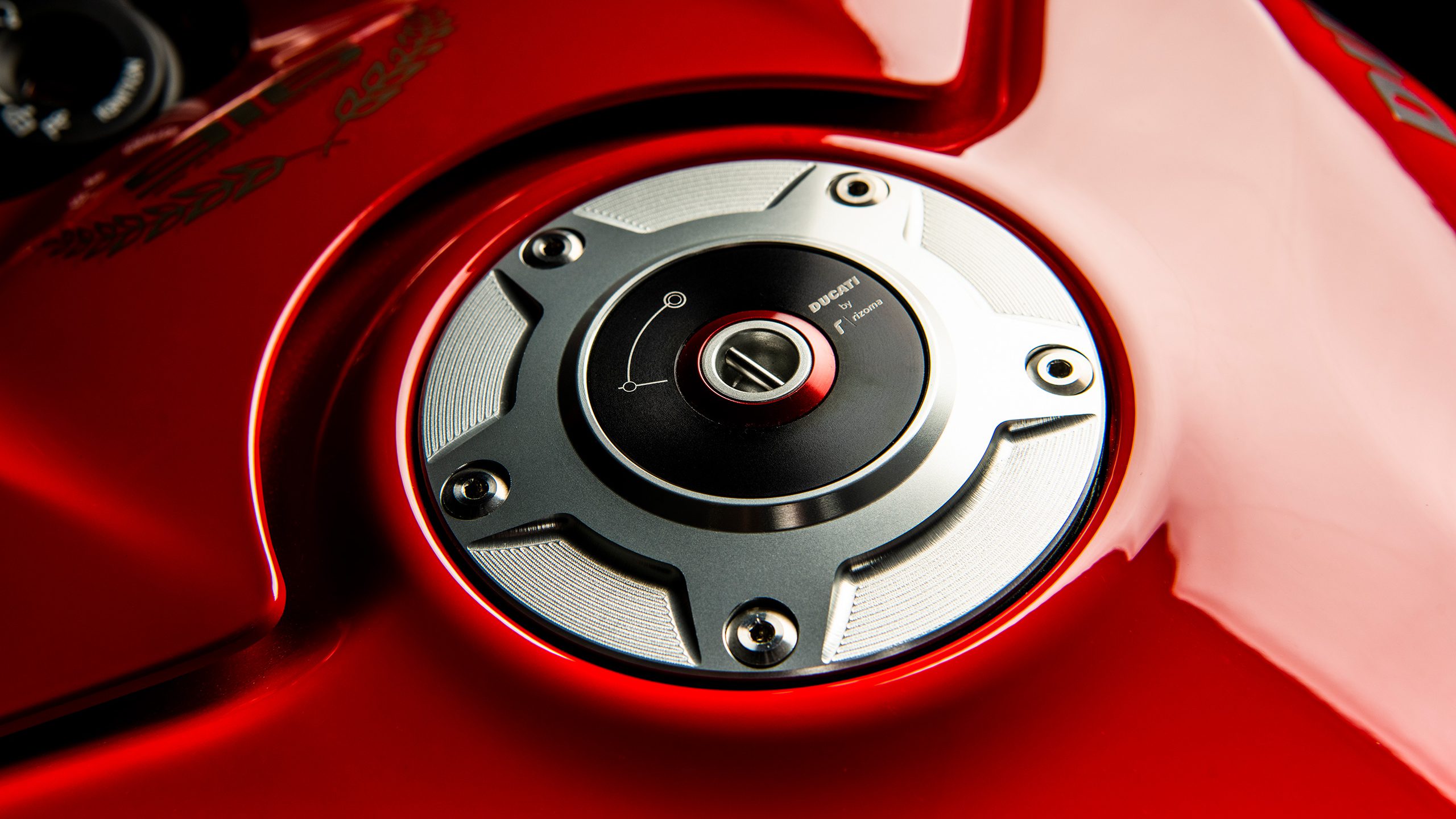 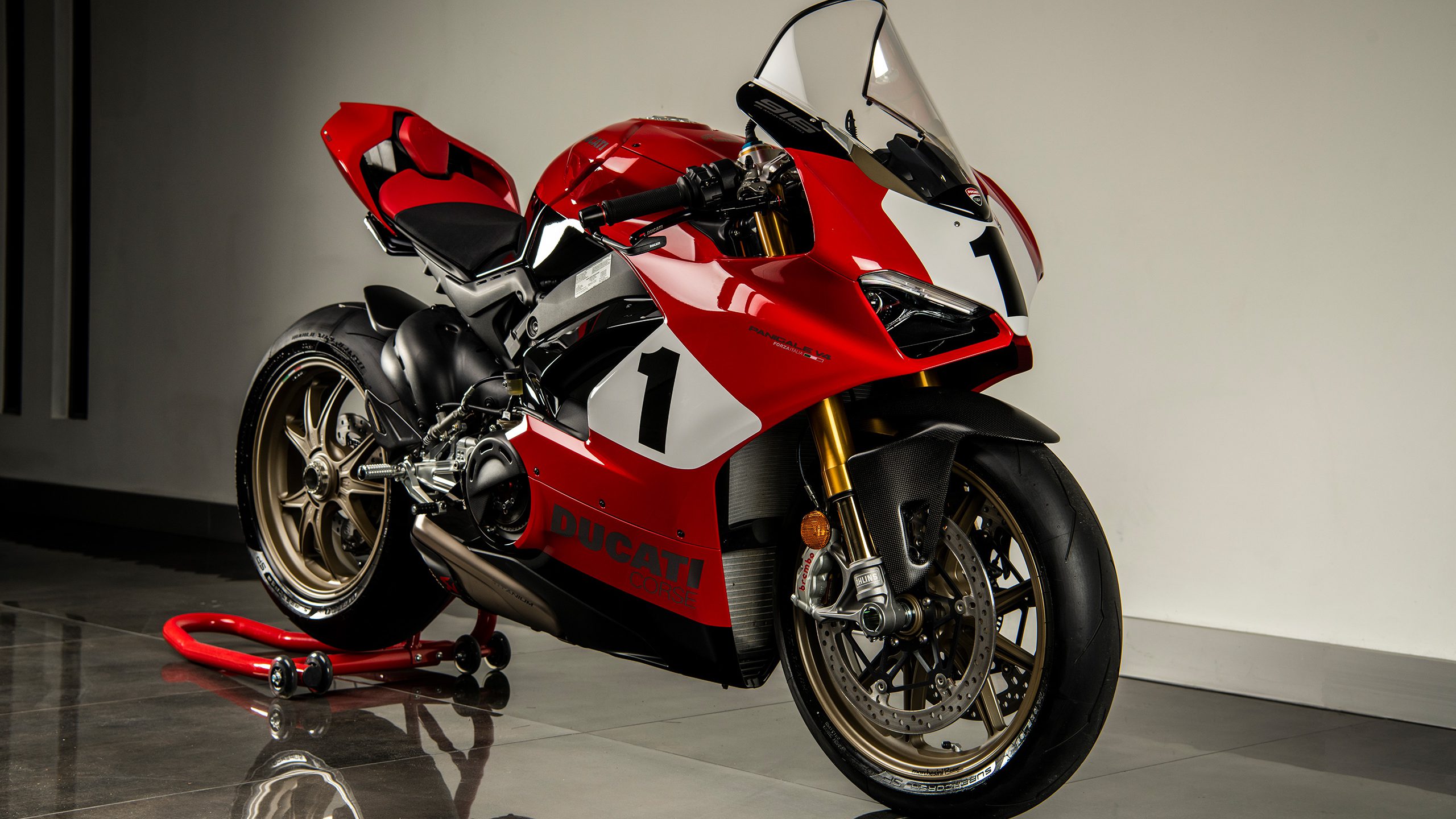 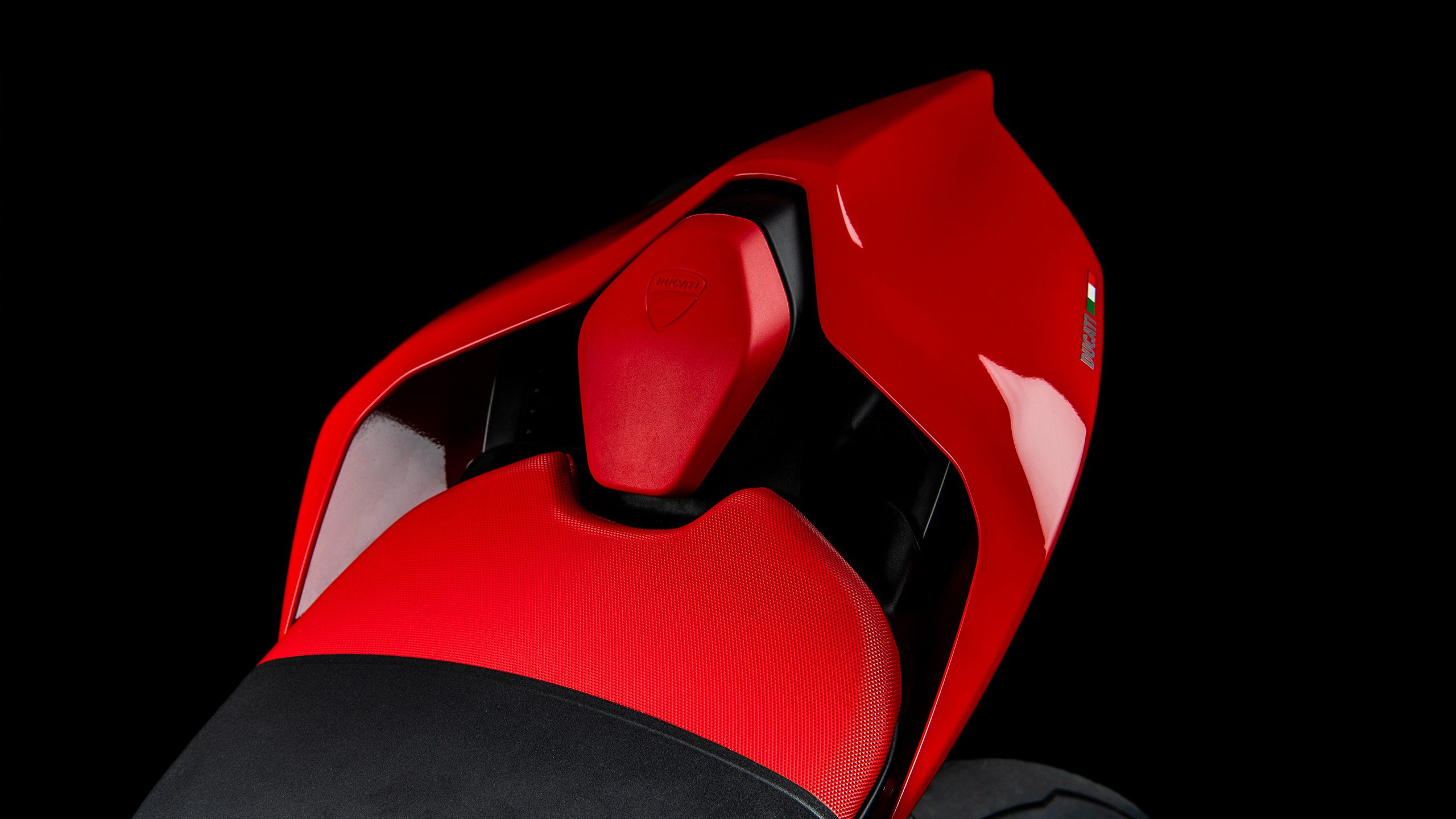 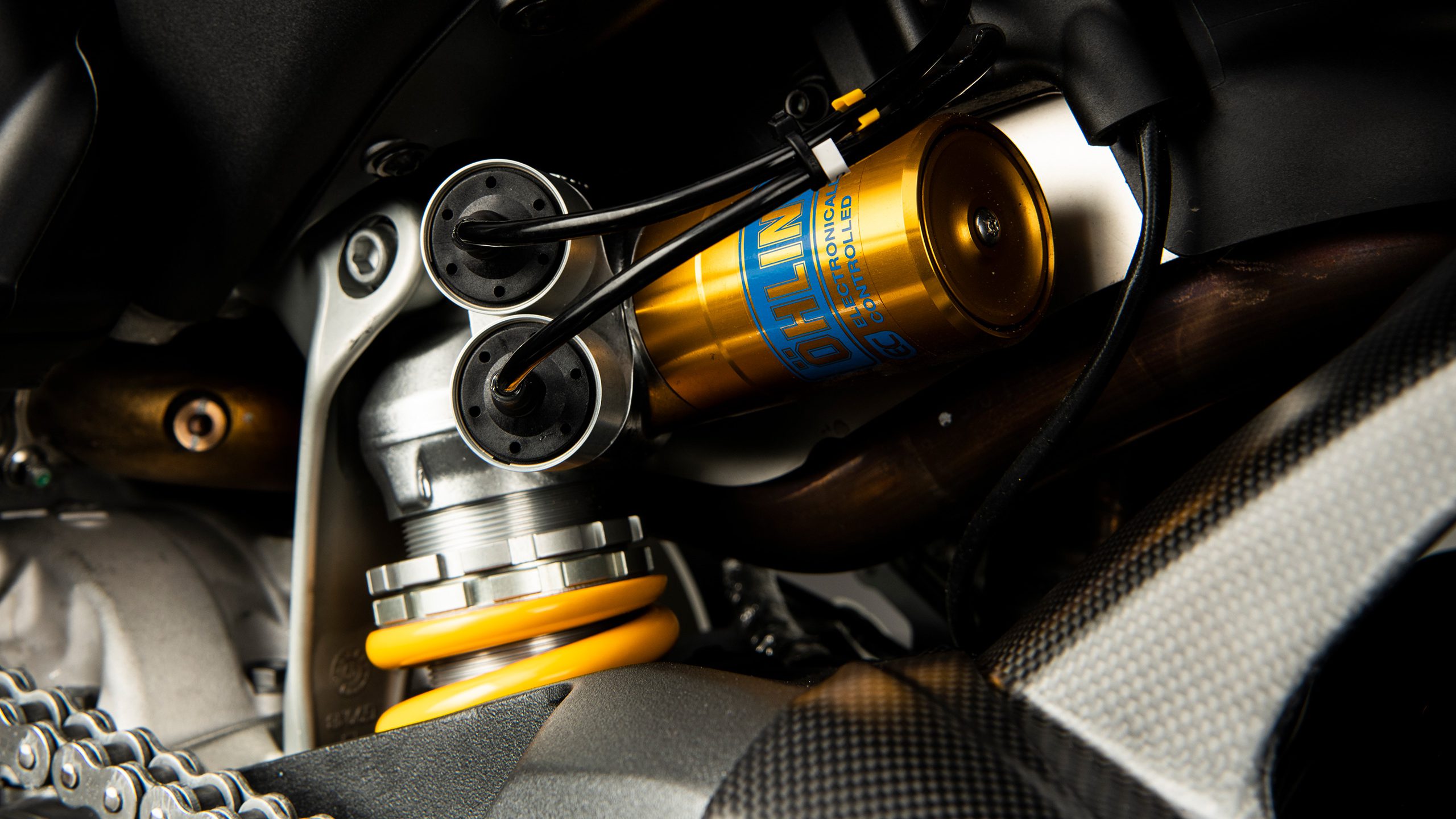 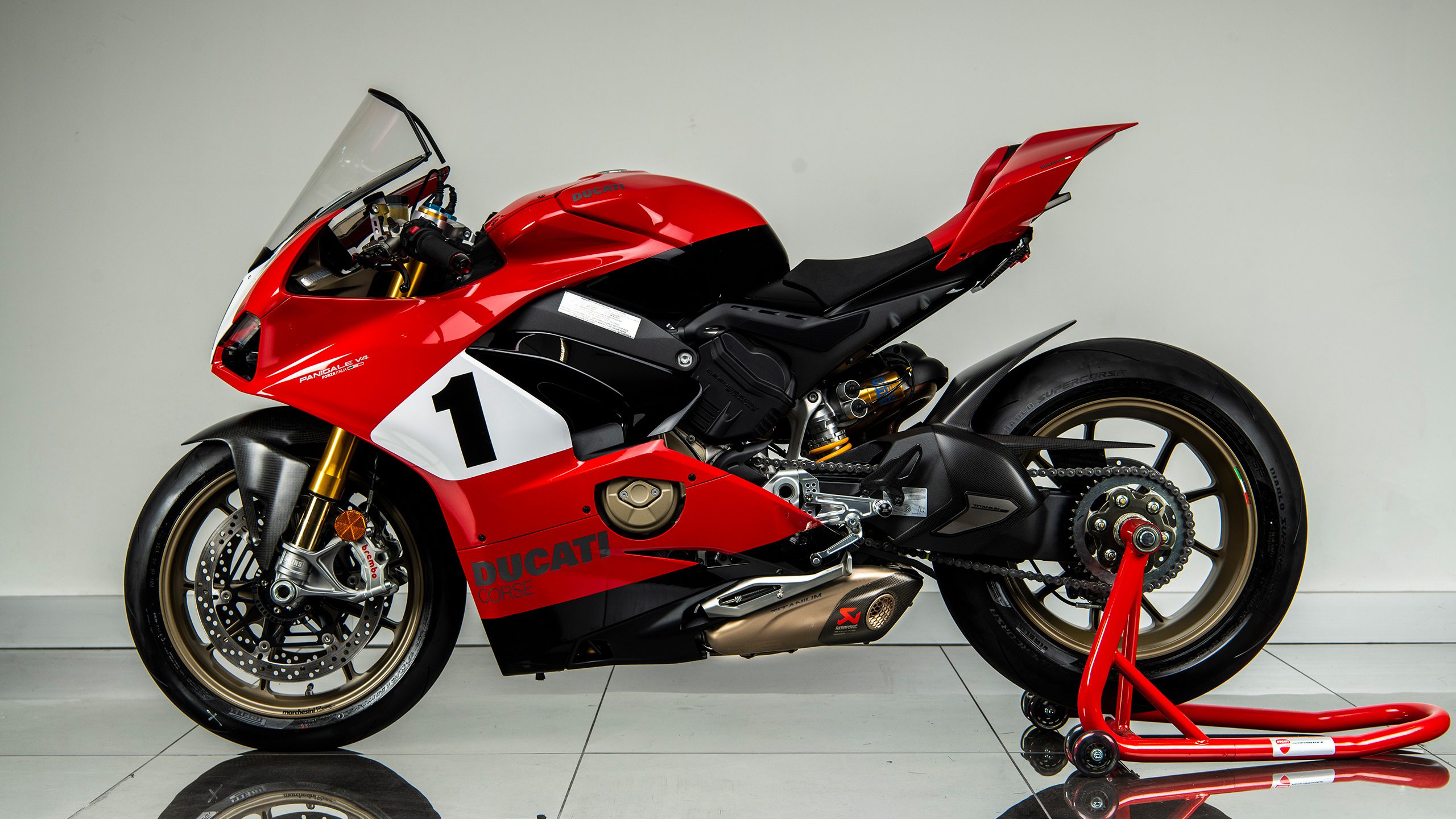 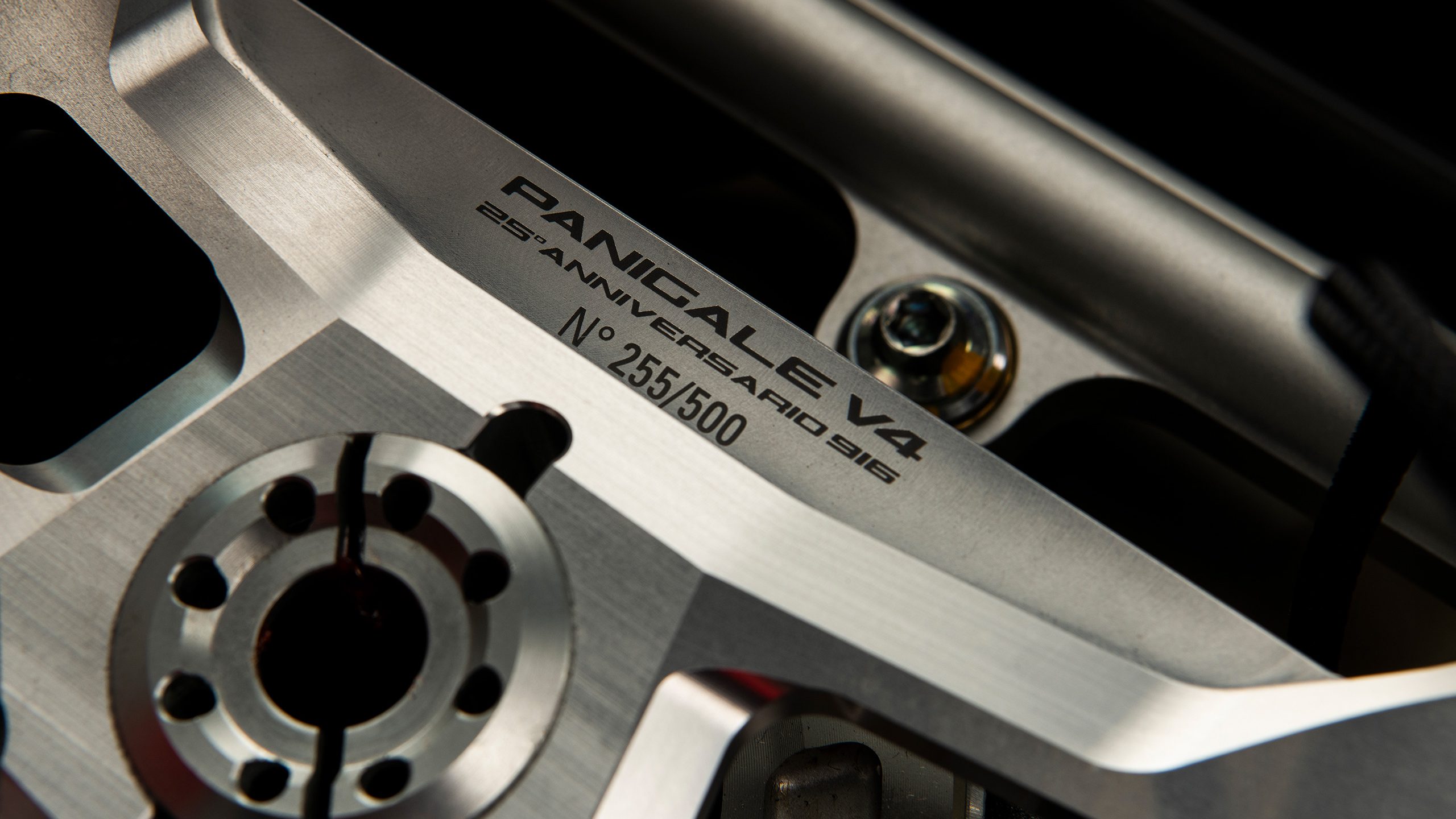 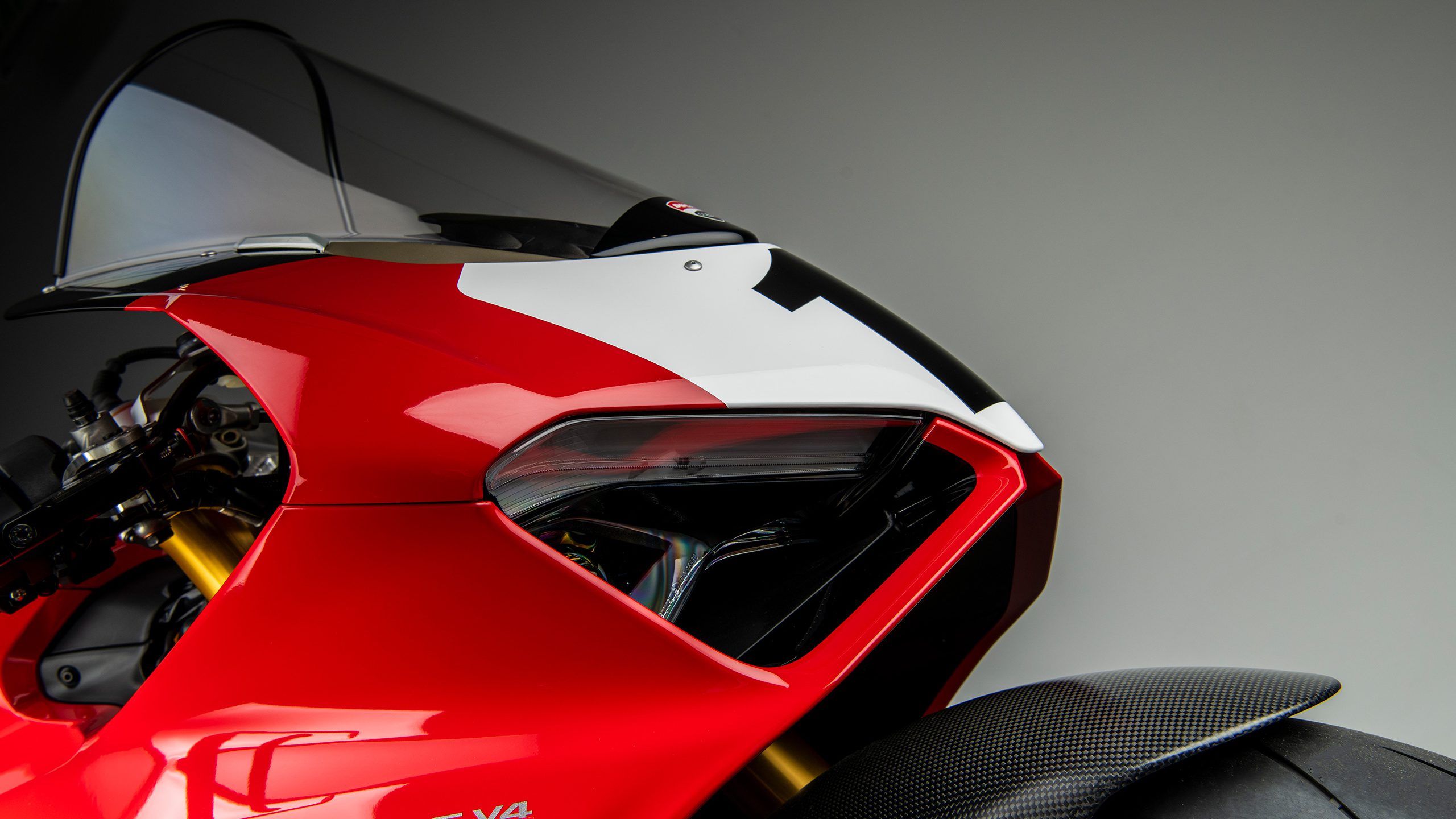 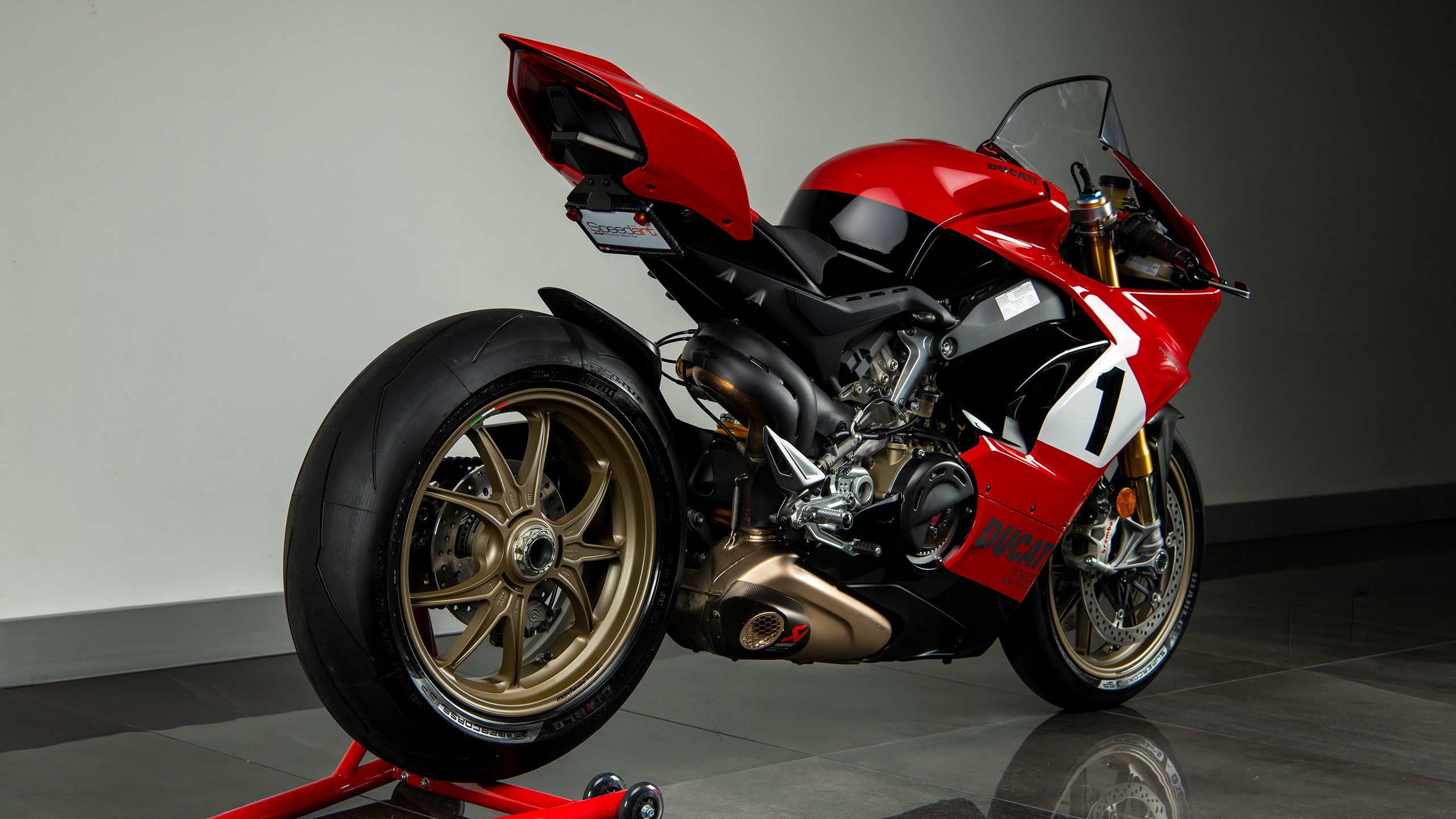 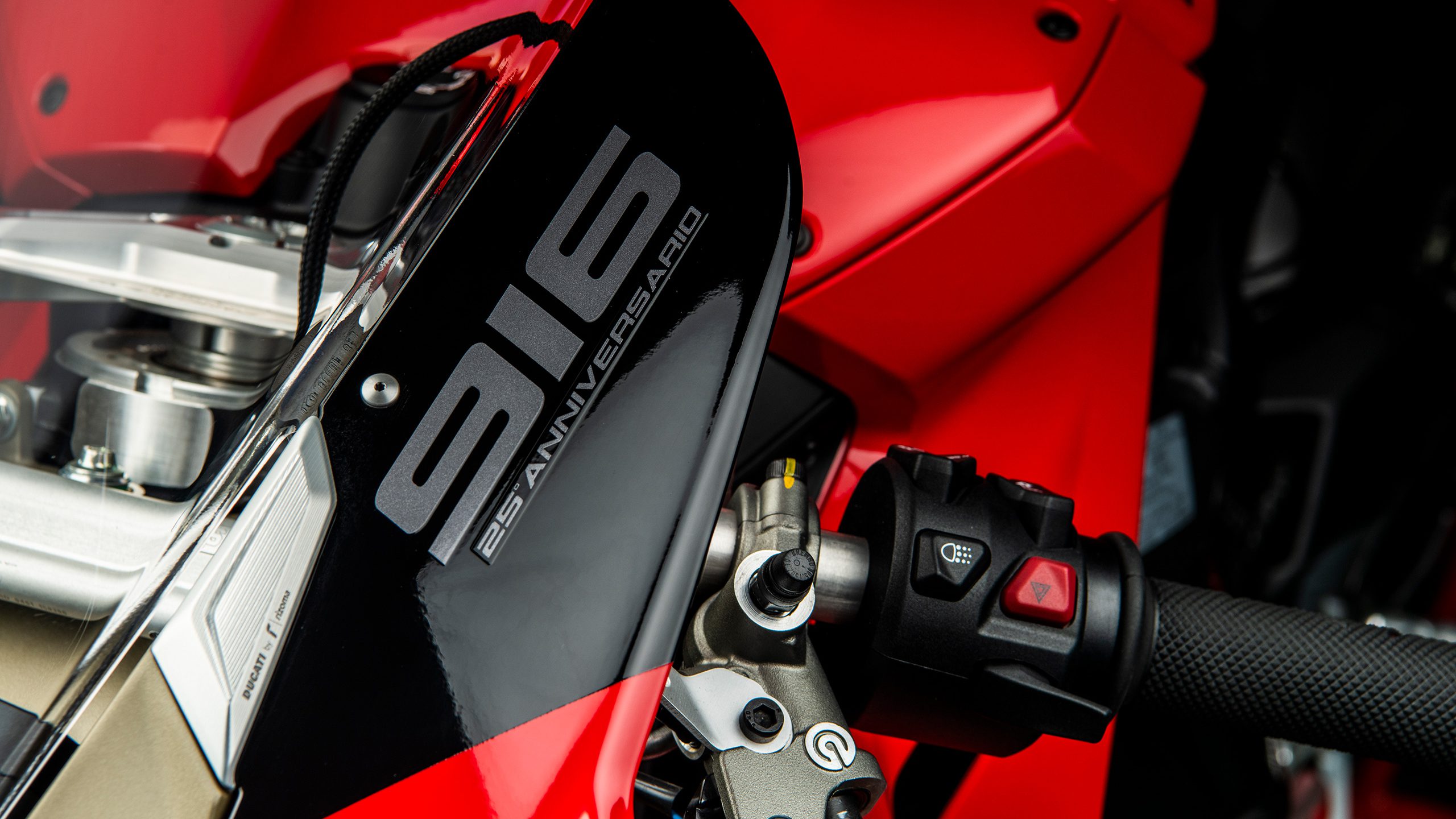 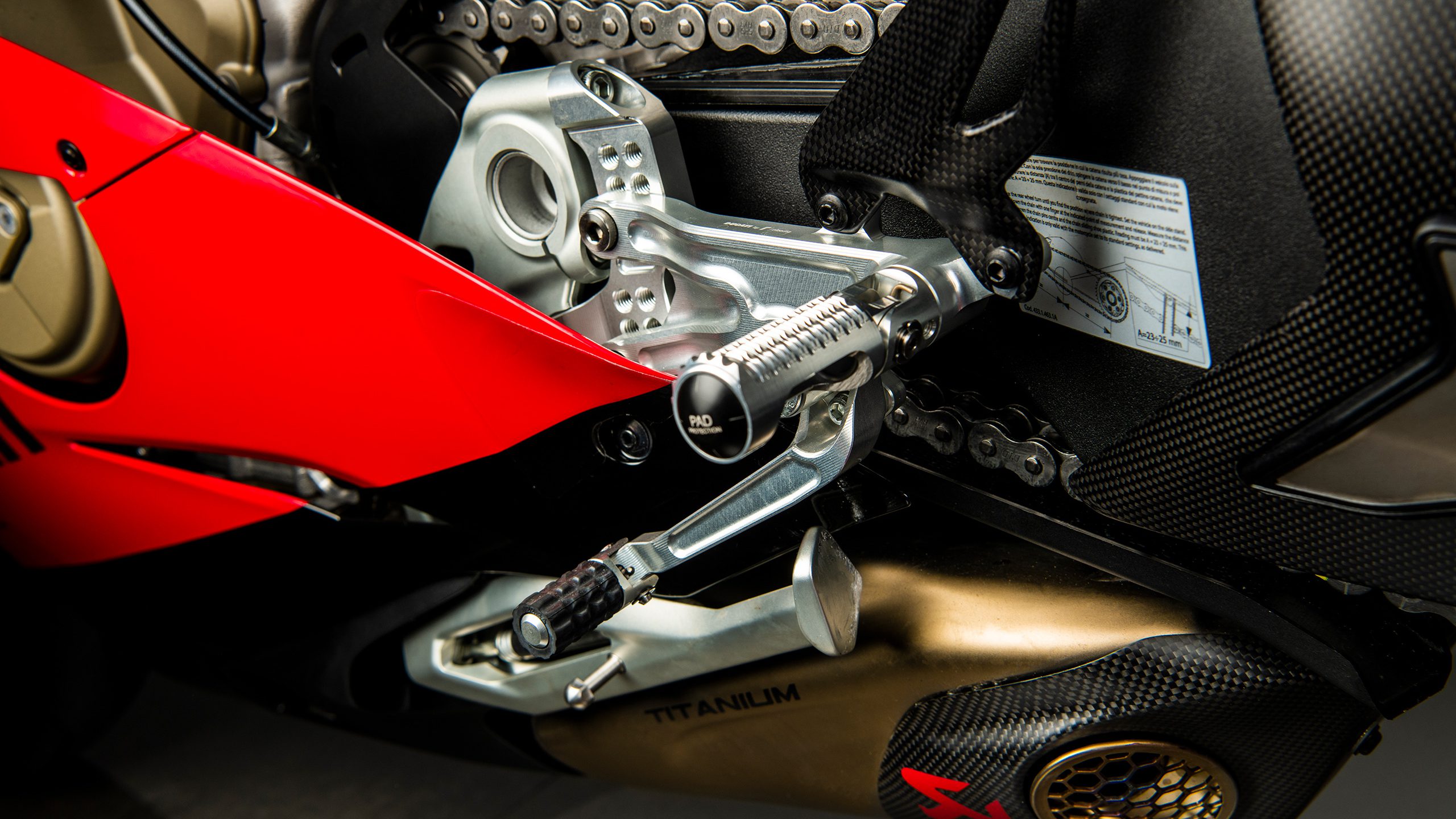 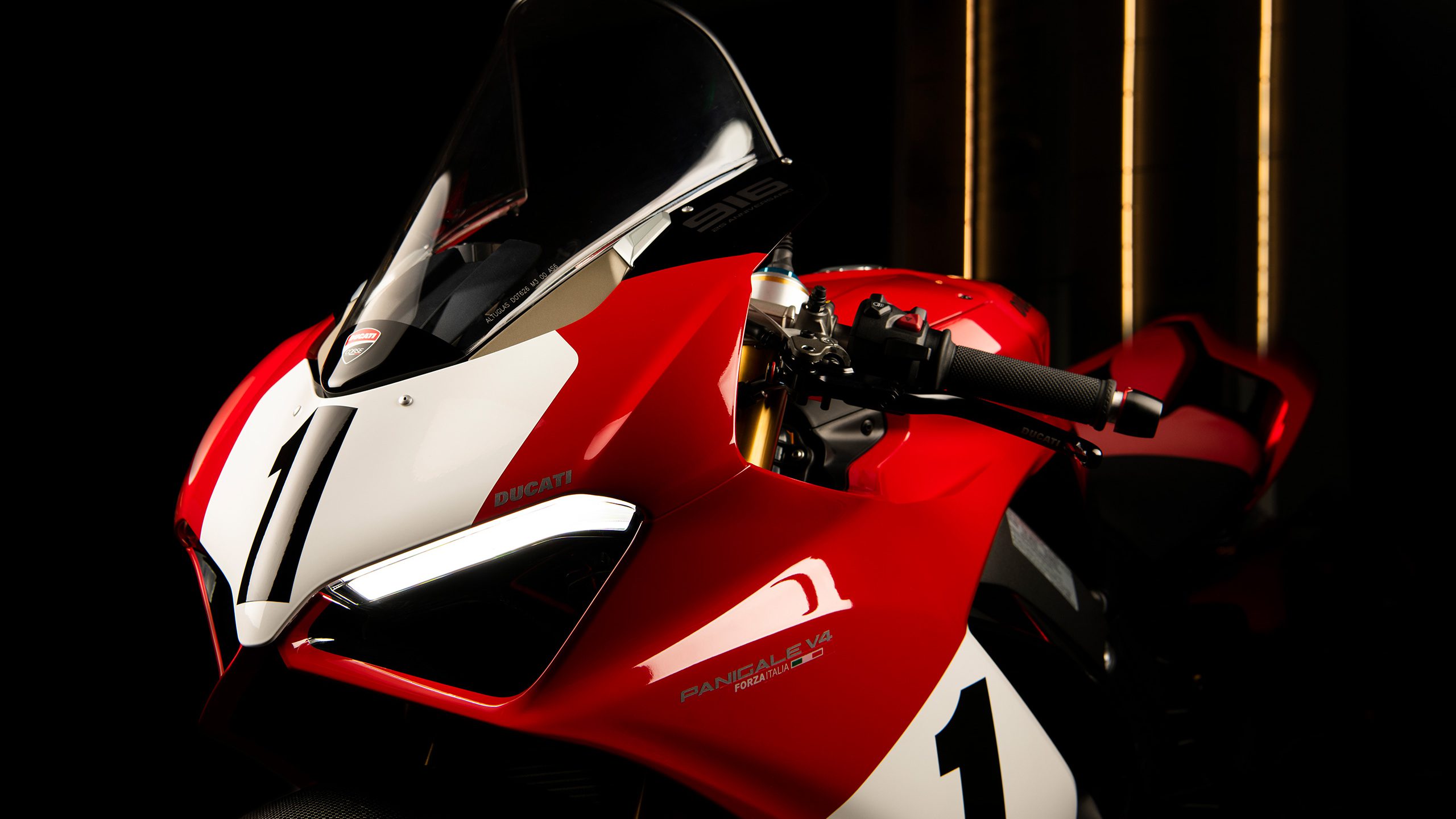 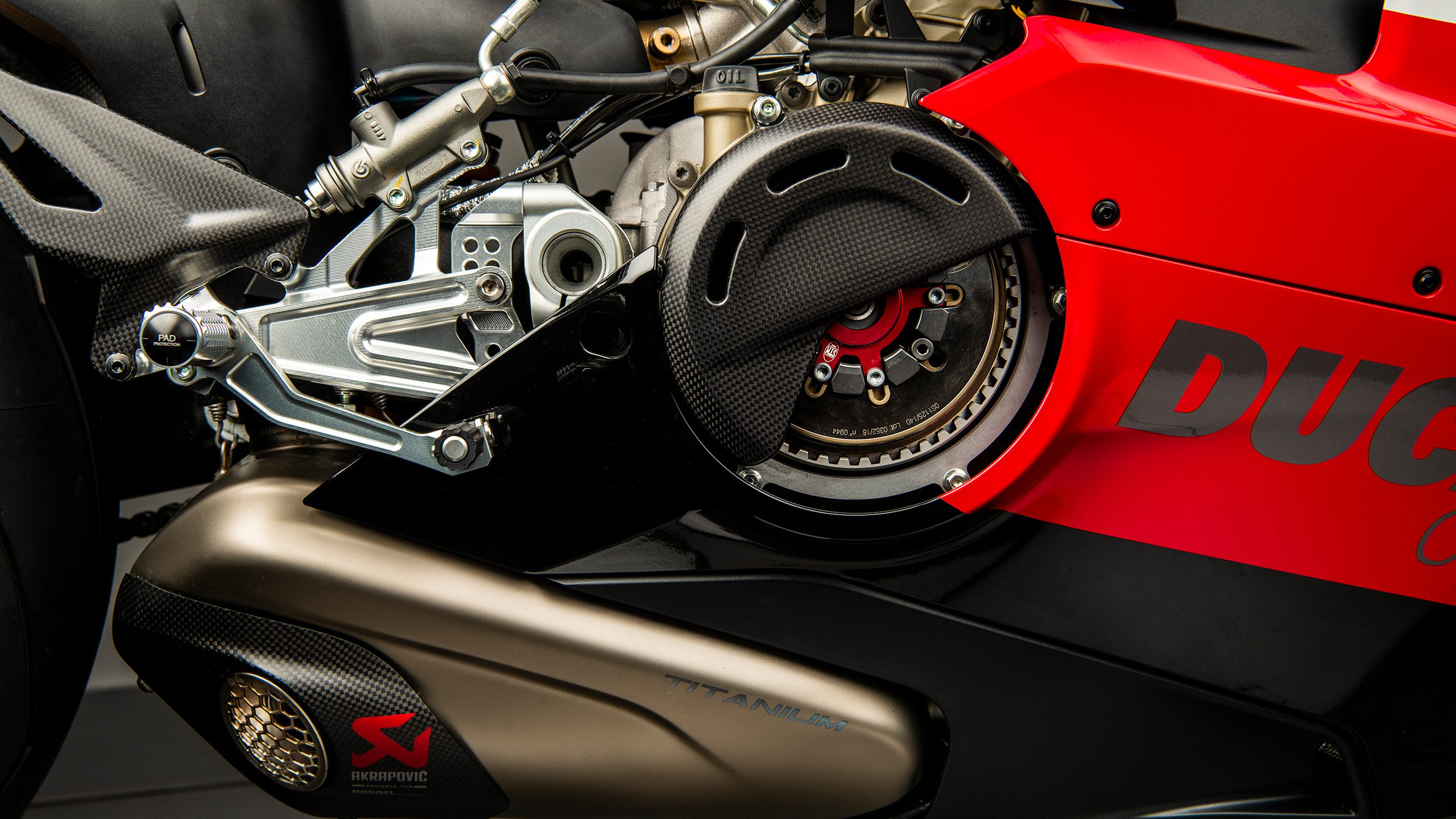 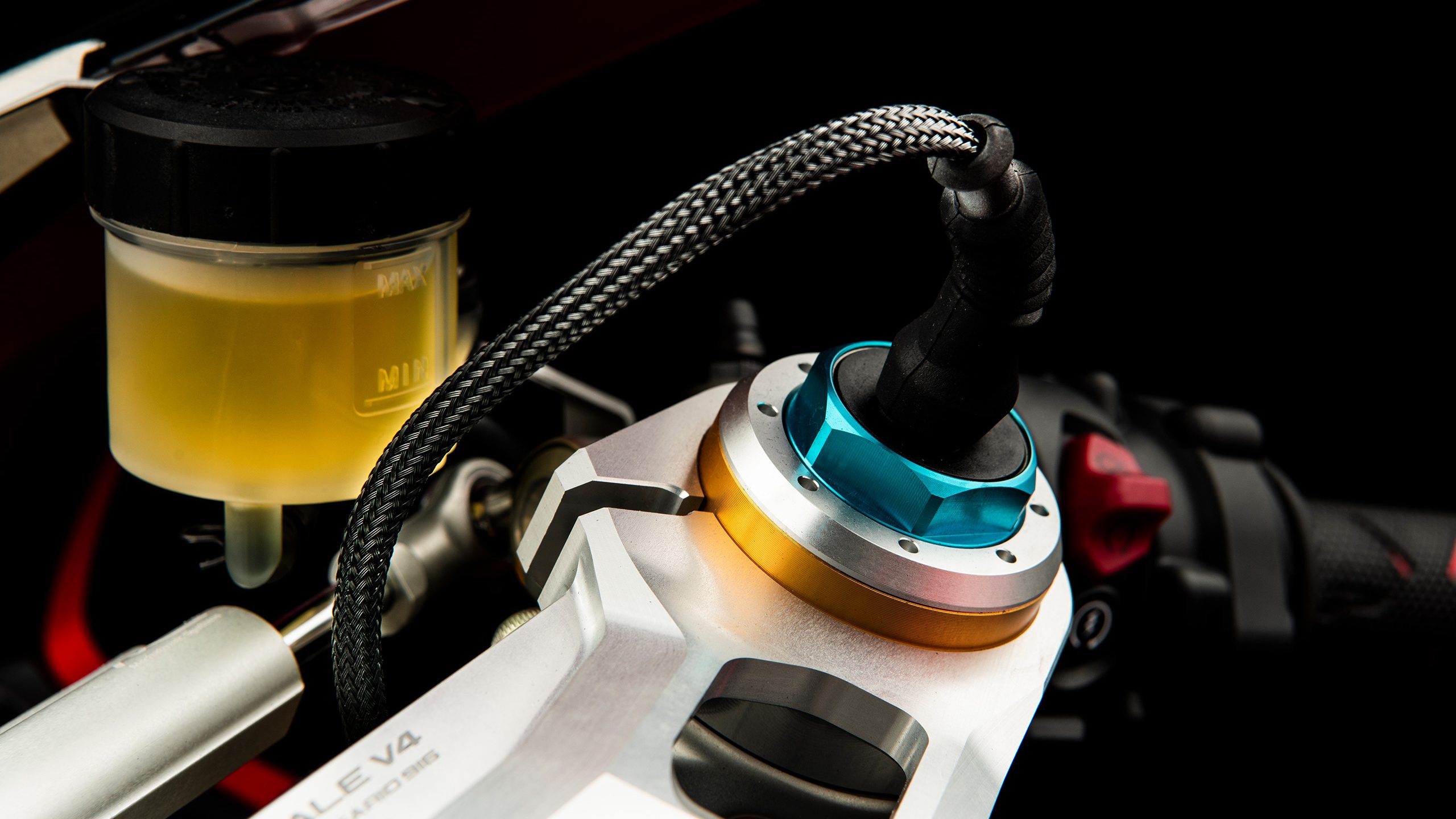 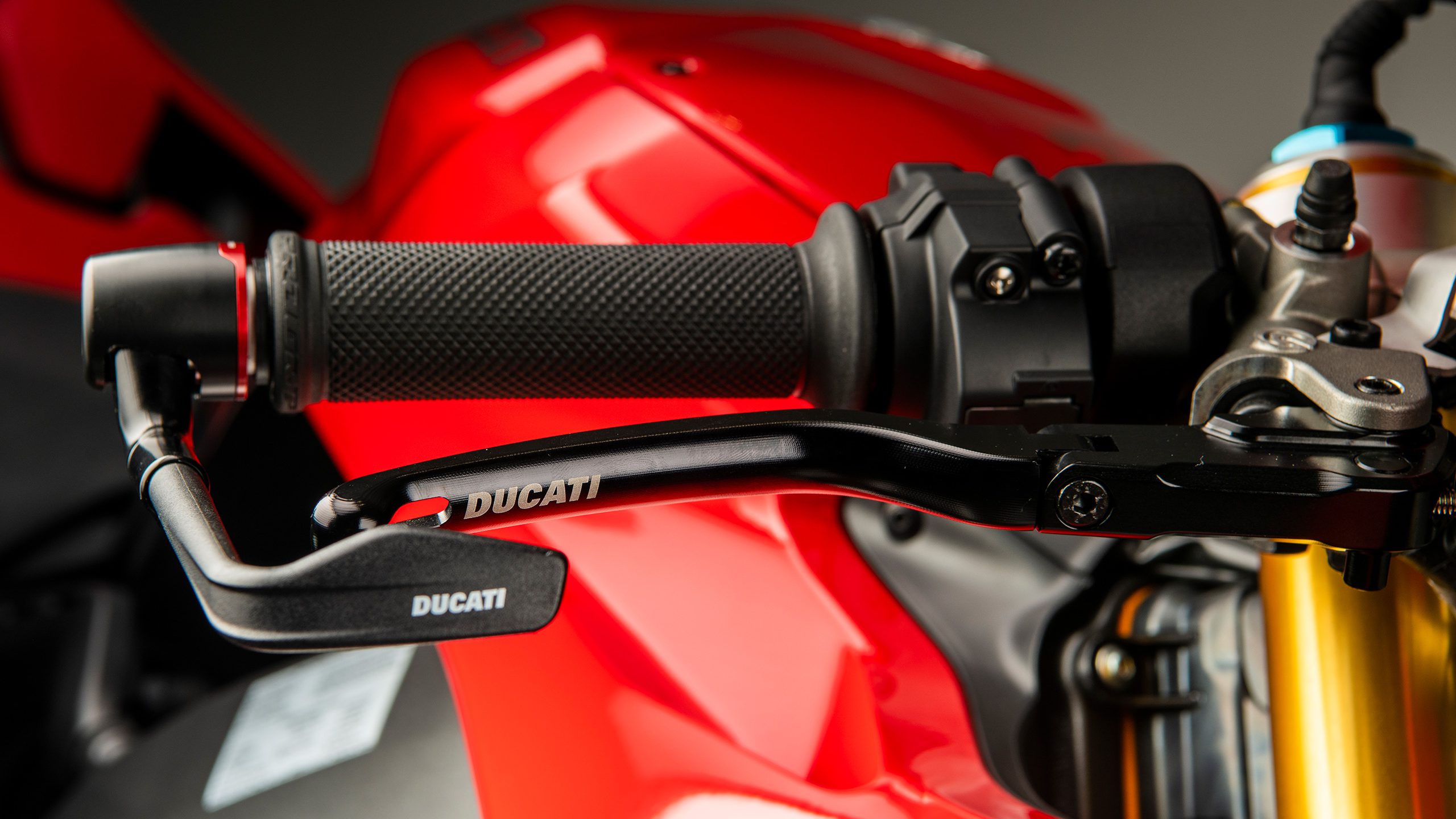 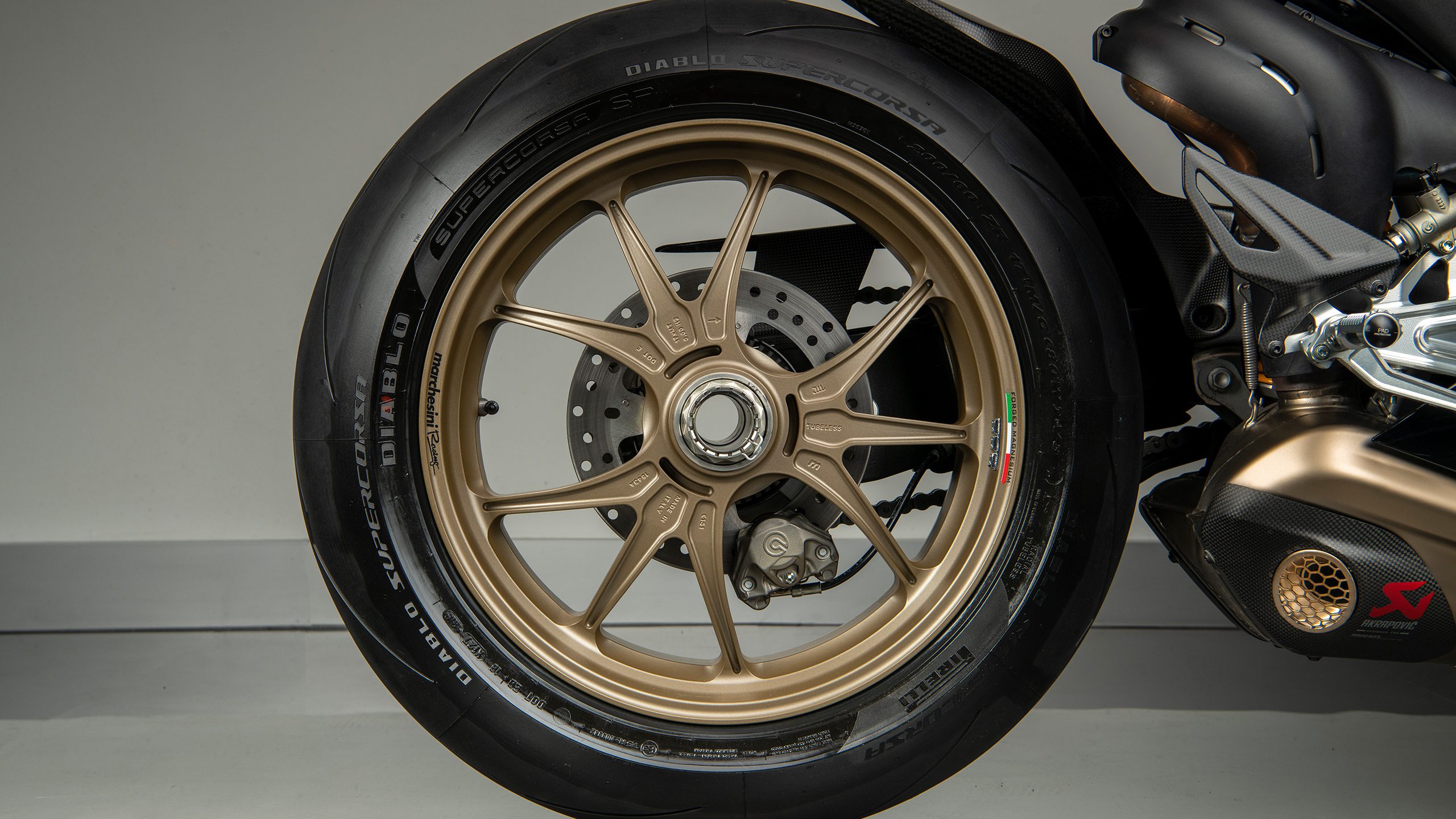 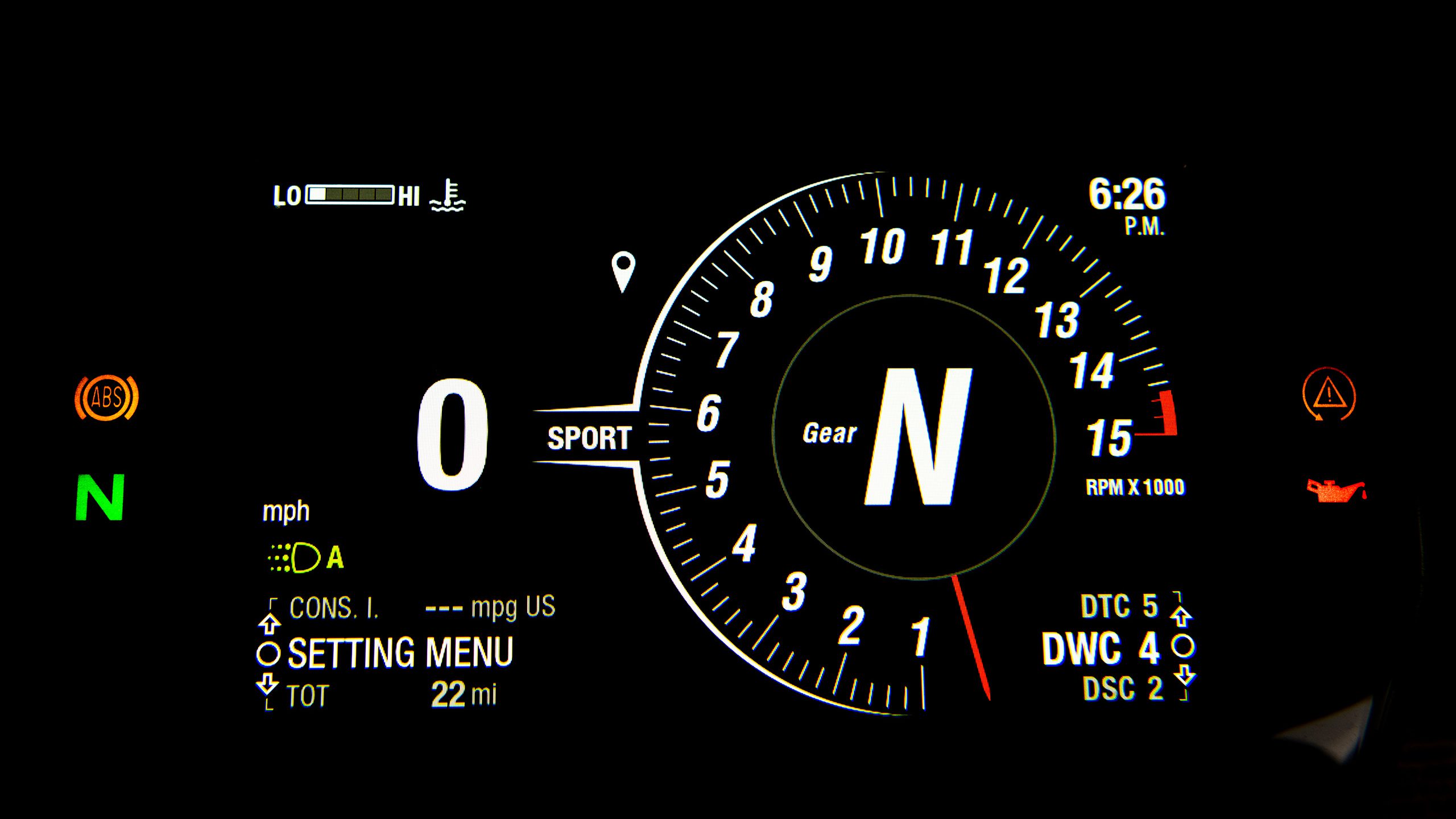 ” To celebrate the 25th anniversary of the legendary 916, the Panigale V4 25° Anniversario 916 was born in a limited and numbered version of 500 units.   A collector’s bike dedicated to all Ducatistas who can relive the spirit of the legendary 916. To satisfy even the most demanding collectors, the bike comes with an authenticity certificate, which displays the bike, frame and engine numbers”.

2019 marks a quarter of a century since the Ducati 916 – designed by Massimo Tamburini – arrived on the global stage and instantly becoming an icon of modern motorbike racing.

The Ducati 916 wasn’t just a great bike, it also won World Superbike championships: the 916 SBK was a force to be reckoned with even as it made its debut and the following years saw it win 120 races, 8 constructors’ titles and 6 riders’ titles, four of them with Englishman ‘King’ Carl Fogarty. Even now, the English racer and the 916 remain the most successful ‘couple’ in Ducati SBK history. To celebrate the 25th anniversary of the legendary 916, the Panigale V4 25° Anniversario 916 was born in a limited and numbered version of 500 units.

The 25° Anniversario 916 is built on the mechanics of the Panigale V4 S. This has been upgraded with racing content from the Panigale V4 R such as the Front Frame, designed to Ducati Corse specifications, the dry clutch and even more track-specific electronics, such as Ducati Quick Shift EVO 2, optimised for aggressive gear shifts, and ‘predictive’ Ducati Traction Control EVO 2. The look of the bike combines a colour scheme that takes its cue from the Ducati 996 SBK (winner of the 1999 World Superbike Championship) with forged magnesium Marchesini Racing wheels, a titanium type-approved Akrapovič exhaust and a long list of carbon fibre and billet aluminium components

A collector’s bike dedicated to all Ducatistas who can relive the spirit of the legendary 916 while riding this version. To satisfy even the most demanding collectors, the bike comes with an authenticity certificate, which displays the bike, frame and engine numbers.

The new Panigale V4 25° Anniversario 916 is characterised by livery inspired by the Ducati 996 SBK, winner of the 1999 World Superbike Championship with Carl Fogarty. The graphics, based on Ducati Red, are distinguished by the number holders of the front and the fairings, where the World Champion’s number “1” is proudly placed.  The lower part of the tank is crossed by a black stripe that extends to the frame and to the side extractors; it accentuates the side view’s dynamism and evokes the side panels of the 996 SBK’s carbon air-box side body panels. The black colour is also found on the lower fairings and headlight housing, making the two front air inlets visually wider and more threatening. The rider seat exhibits the same colour combination as the bike, with a clear separation between black and red that extends to the rear buffer.  Decals that reproduce the “Shell” and “Foggy” logos are available to apply on the side fairings and at the base of the Plexiglas respectively; these two details were designed to further strengthen the visual connection with Carl Fogarty’s 996 SBK.

The Panigale V4 25° Anniversario 916 is based on the mechanics of the Panigale V4 S evolved with components and racing solutions from the Panigale V4 R. Standard equipment includes Marchesini Racing forged magnesium wheels, approved Akrapovic titanium silencers, and several carbon fibre and billet aluminium parts, which together reduce the weight by 1 kg compared to the V4 S version.

The following are directly derived from the Panigale V4 R: the “Front Frame” designed to Ducati Corse specifications; the dry clutch; and the specific electronic controls for track use, such as the Ducati Quick Shift EVO 2 and the Ducati Traction Control EVO 2.

The tail of the Panigale V4 25° Anniversario 916 is in a single-seater version to highlight the bike’s “ready-to-race” character. Its wing design is inspired by an aerodynamic spoiler and incorporates a full-LED tail light functionally divided into two parts, according to the tradition of Ducati sportbikes. The double red arch of the parking light makes the Panigale V4 unmistakable, just like its aggressive look.

The “Front Frame”, left visible, becomes an integral part of the bike, giving it a tight fairing, practically custom tailored. It relies on the Desmosedici Stradale engine, a load-bearing component. This solution represents the evolution of the Monocoque structure and was born by making use of the experience gained in MotoGP. Compared to the Monocoque, the “Front Frame” makes it possible to decouple the torsional and lateral stiffness so as to achieve the proper amount of pliability with respect to the stresses on the frame, better absorbing uneven road conditions in the curves and ensuring the necessary stability.

All this translates into a superior agility and precision that provides the rider of the Panigale V4 with an easier and less tiring control. The main difference in the layout compared to traditional solutions is the use of the engine as a structural element for the entire frame. The “Front Frame” features a compact frontal structure weighing only 4 kg, secured directly to the upper semi-casing of the front bank and to the cylinder head of the V4’s rear bank, the engine block also serving as a connection point for the rear suspension and pivot point for the single swinging arm.

The most important advantage of the “Front Frame” is the use of the Desmosedici Stradale engine to achieve the desired rigidity, making it possible to significantly reduce the extension of the main frame – and therefore its weight – achieving a superior rigidity/weight ratio. To this advantage is added the fact that the reduced length of the uprights running alongside the engine has made it possible to design a compact motorcycle, especially where the rider sits. The chassis is completed by the lightweight front subframe made of magnesium and the chill-cast aluminium seat support, secured on the top to the “Front Frame” and at the bottom screwed onto the cylinder head of the rear bank. The rear suspension exploits levers attached to the Desmosedici Stradale engine by forged aluminium. The levers react to the movements of an aluminium cast single-sided swinging arm.

The Desmosedici Stradale was developed to combine racing performance with all the necessities for road use. To maximise mid-range torque – so important for the enjoyability of motorcycles on roads open to traffic – and to achieve torque and power at slower speeds, the engine has a larger displacement than the MotoGP version, specifically 1,103 cm³. It delivers a power output of more than 155 kW (214 hp) at 13,000 rpm and a maximum torque of over 120 Nm (12.2 Kgm) from 8,750 to 12,250 rpm in the Euro 4 version.

Variable height intake funnels optimise cylinder filling at all rotation speeds with important benefits in terms of power and rideability. The fuel supply system is thus completed by oval throttle bodies, each with two injectors: one below the throttle and the other above.  Starting from the Desmosedici GP engine, the manufacturing technologies, the materials and the auxiliary components layouts have been modified to achieve the required road durability, achieving standard maintenance intervals of 24,000 km (Desmo Service), Euro 4 homologation and high production capacity.

As for the racing world, where the only thing that matters is maximum performance, the Panigale V4 R is equipped with a dry clutch that offers significant advantages. Infact, the Panigale V4 R is equipped with an STM EVO-SBK clutch made from billet alumnium with housing and 48-tooth plate pack. The dry clutch guarantees important benefits in ease of handling: in particular, a more effective slipper function, even during the most aggressive downshifts, and greater fluidity during all “off-throttle” stages. Furthermore, there is the possibility of customizing the “mechanical” engine brake level by choosing a different secondary. Other significant benefits are the absence of resistance from the engine oil, and the presence of a cleaner oil: the plate wear dust is not conveyed into the lubrication circuit indeed.

The iconic, mechanical noise of the dry clutch should not be underestimated: an exciting and unique sound for the most passionate Ducatistas!

The Panigale V4 25° Anniversario 916 is equipped with a state-of-the-art electronic package, based on the use of the Bosch 6-axis inertial platform (6D IMU – Inertial Measurement Unit) that includes controls to manage all the riding phases. The electronic equipment includes:

Speedart Motorsports offers motorbike No. 255 for sale and welcomes all interested parties to witness up close and personal this spectacular thoroughbred at our Design District showroom. At the time of this listing only 22 miles have been recorded on the odometer while no imperfections or any signs of use are evident.

The new caretaker of this iconic Ducati will receive all keys, manuals and equipment as delivered from the factory along a branded silk dustcover and as an extra bonus, a rear Ducati pit stand will be included in the sale.