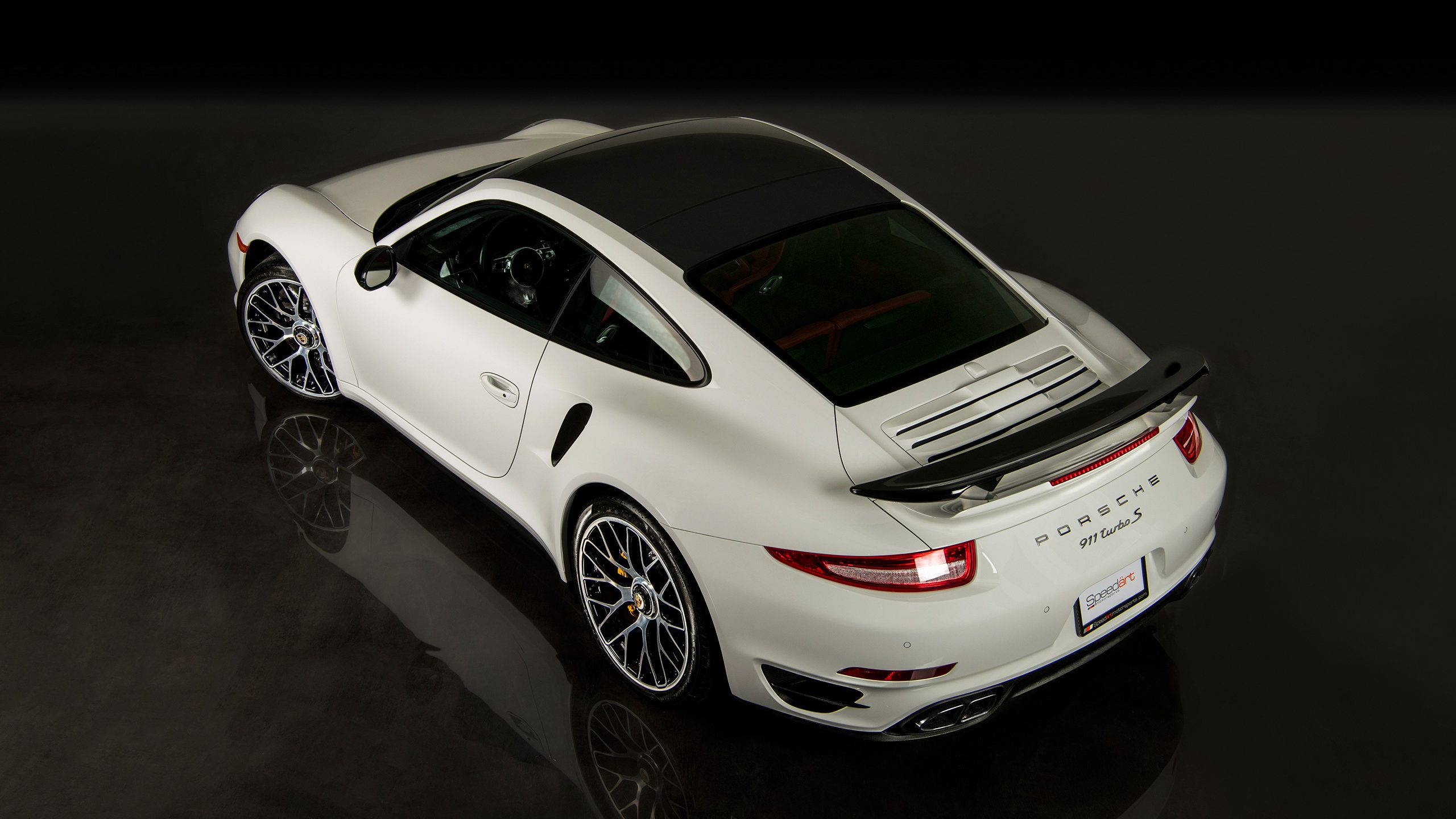 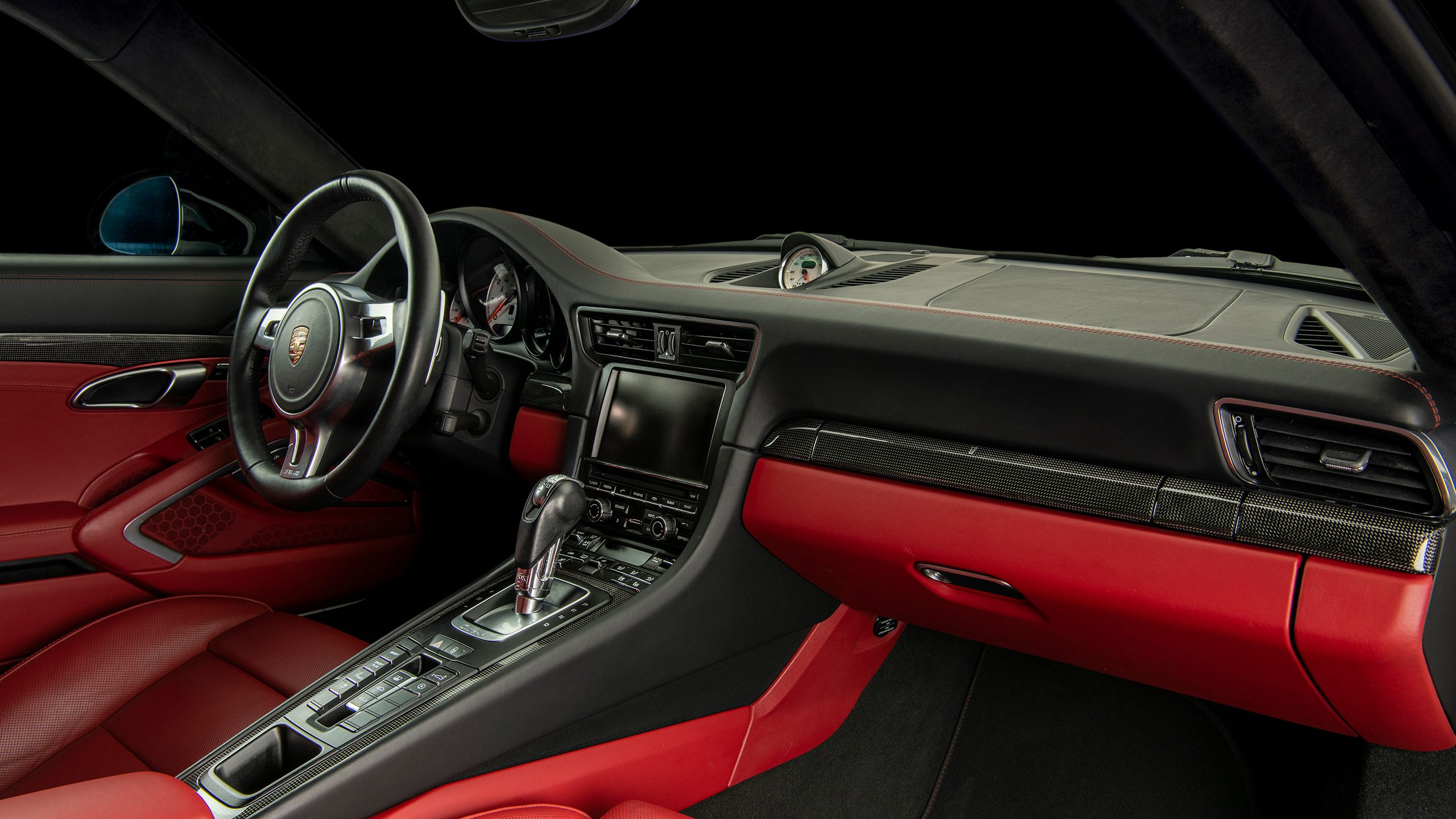 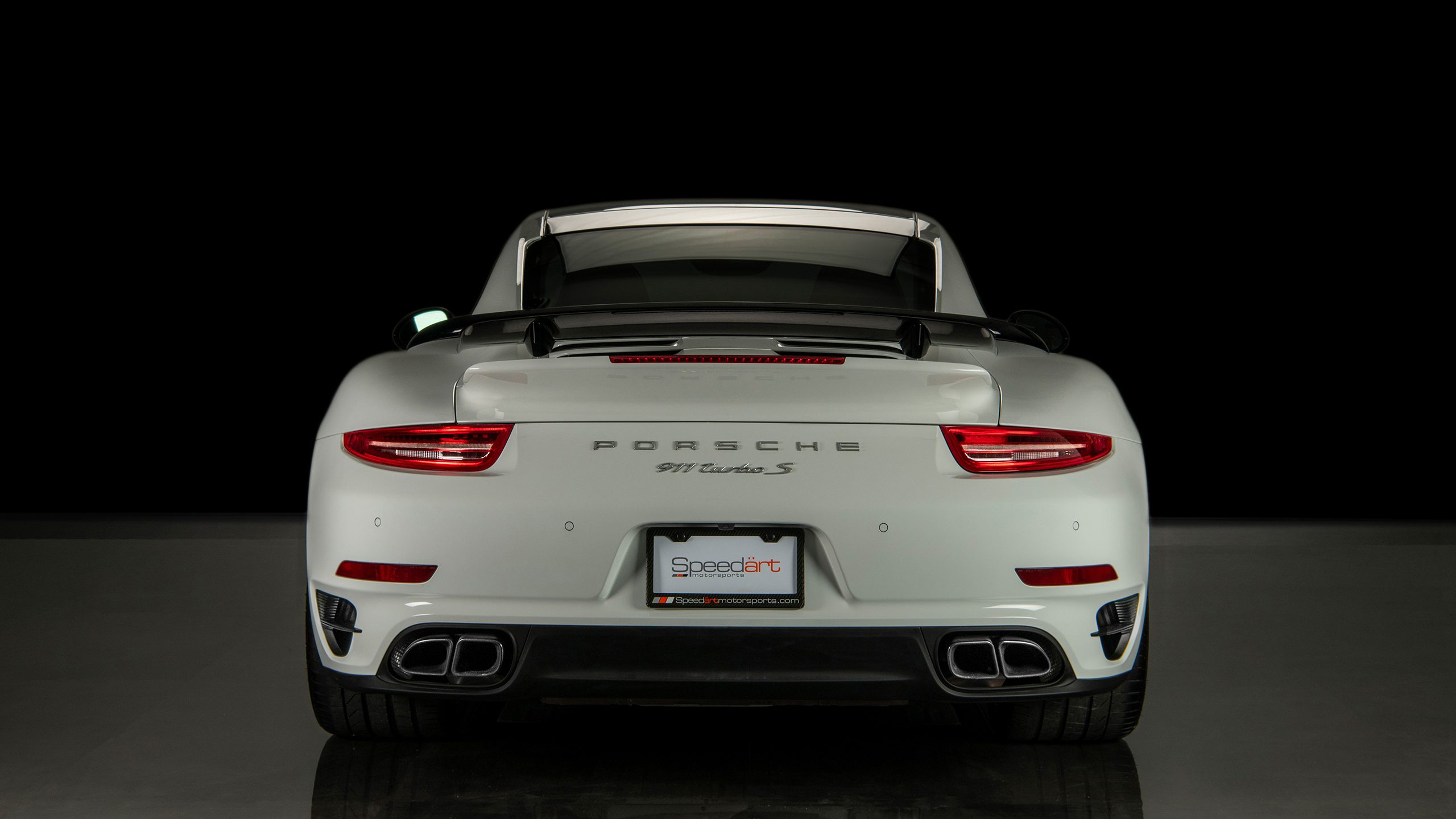 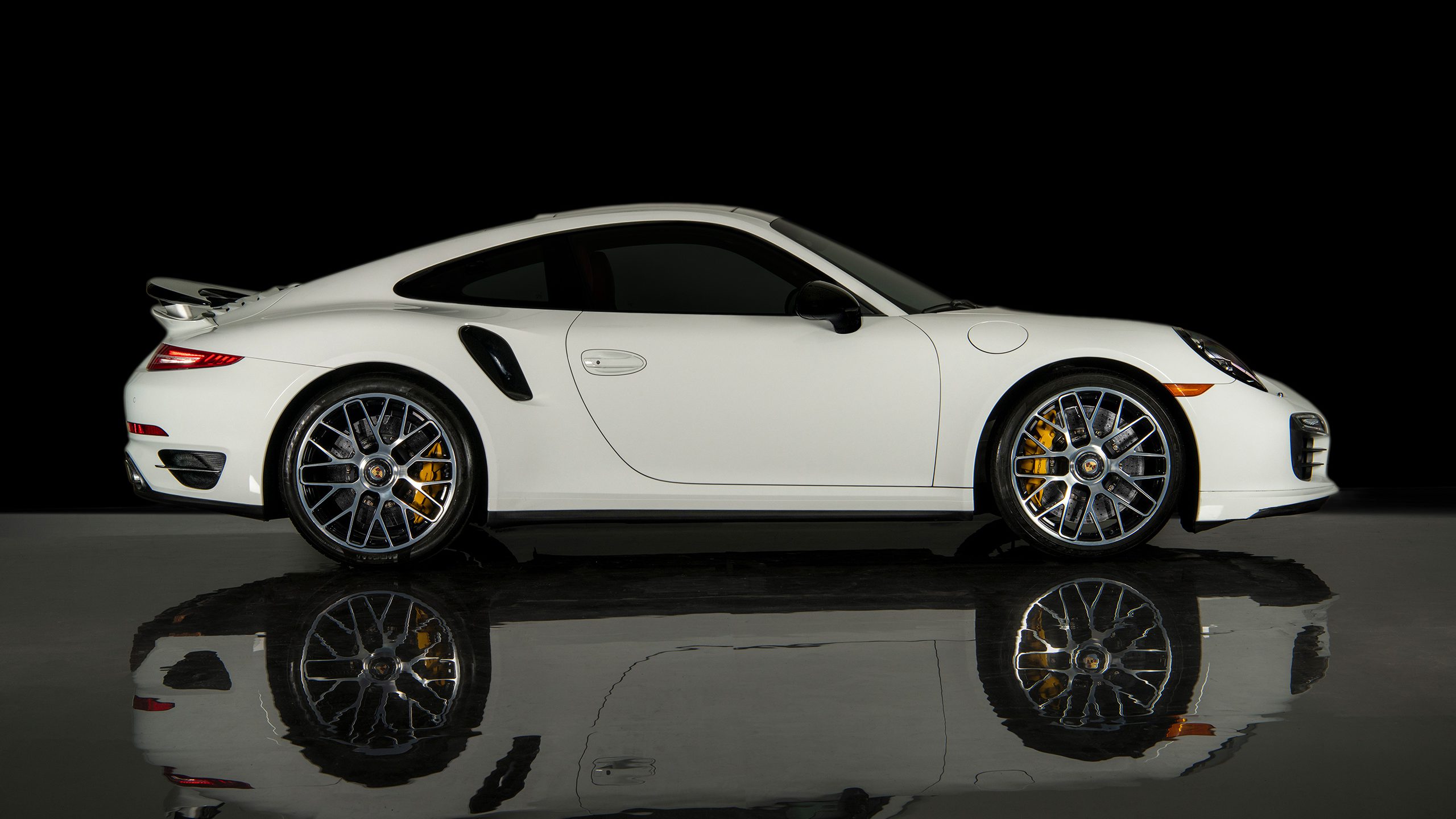 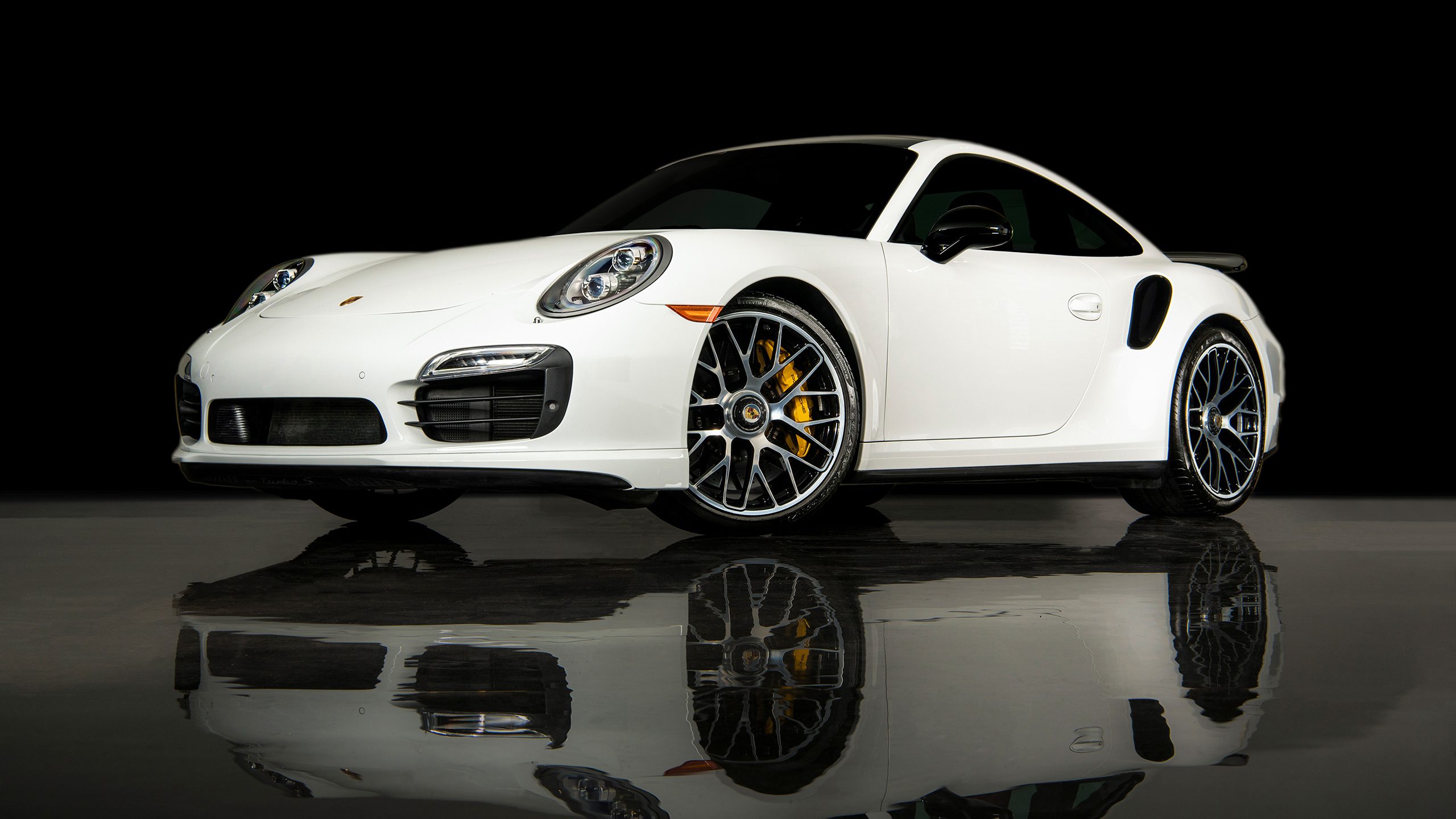 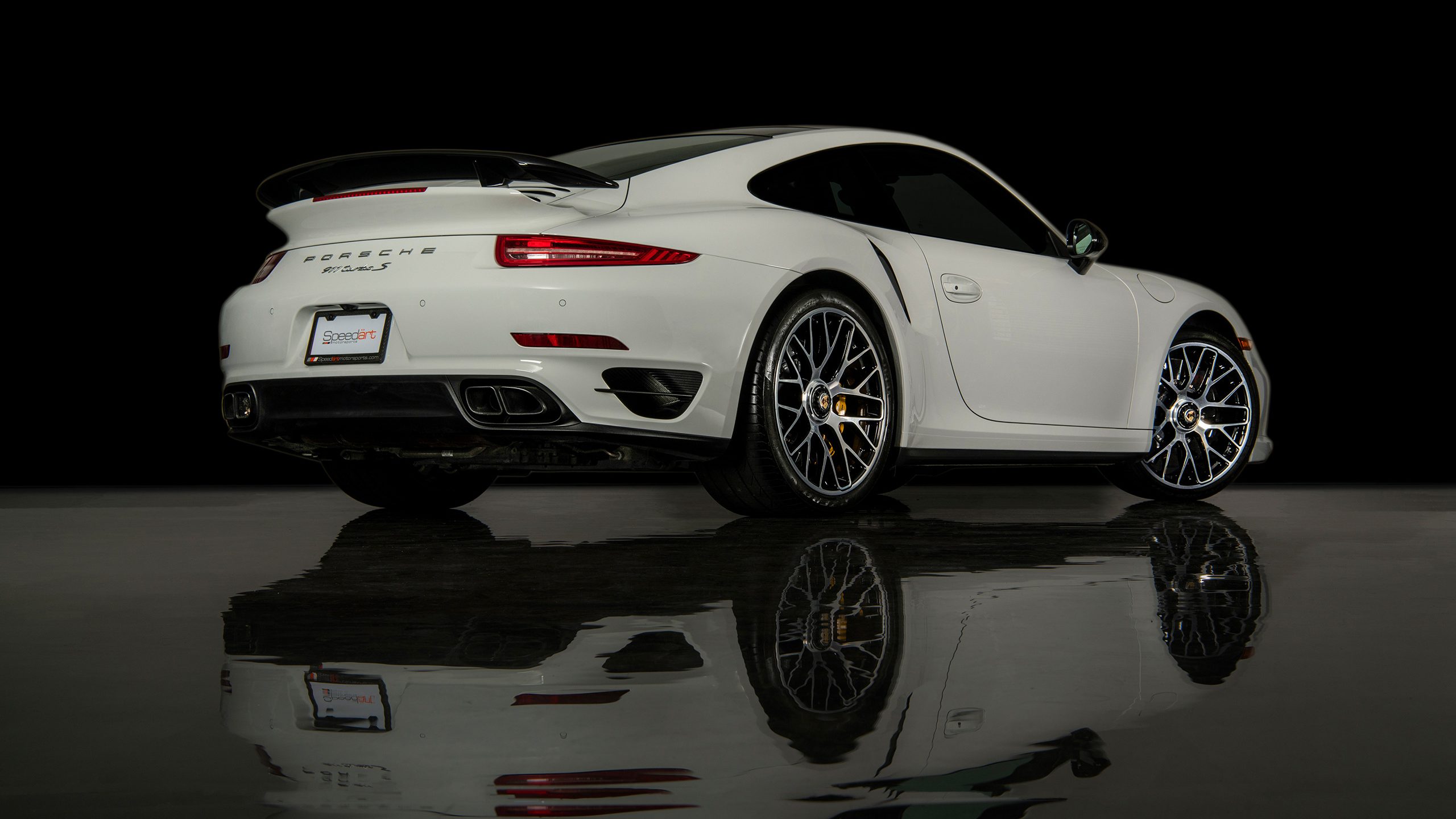 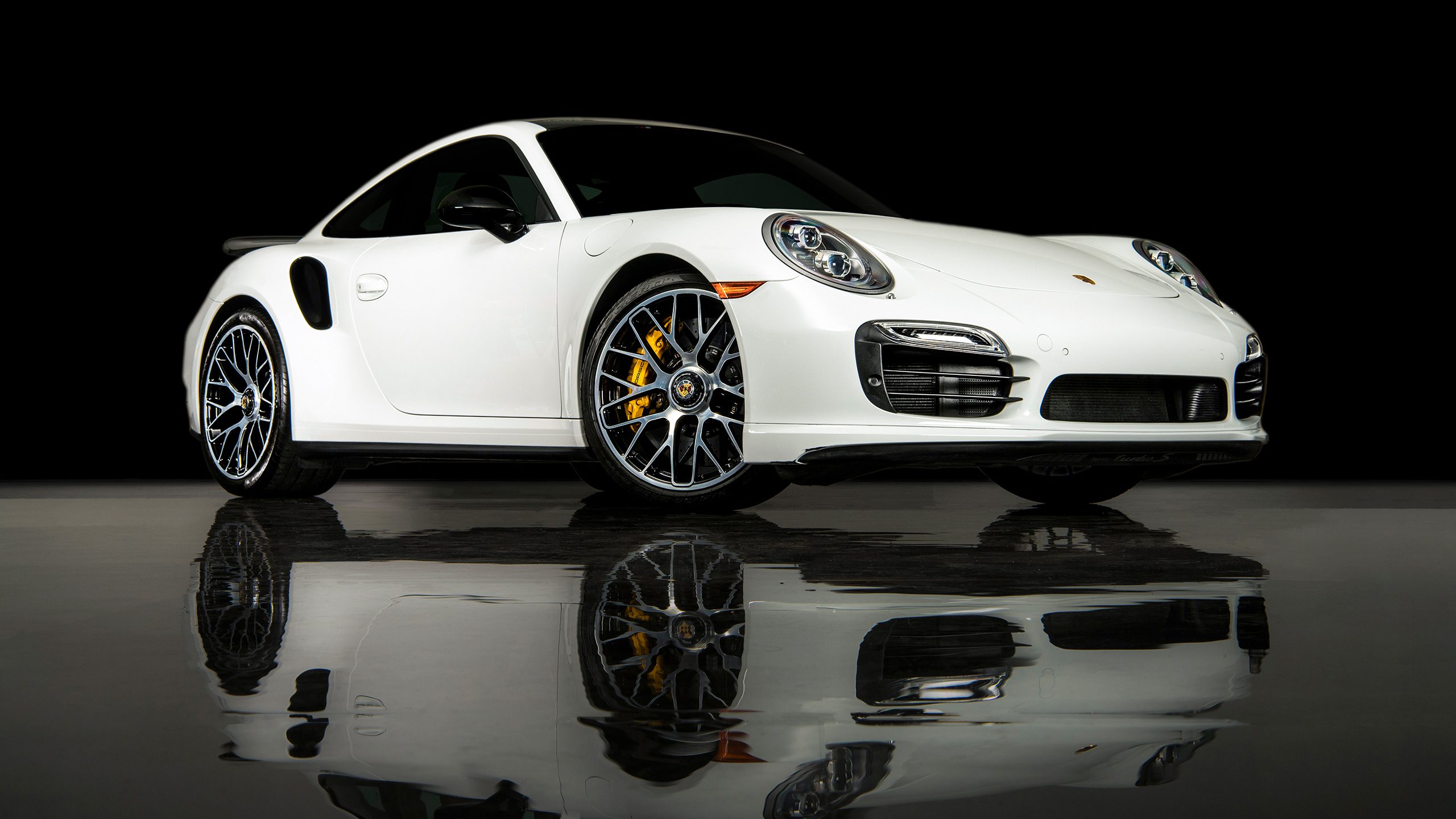 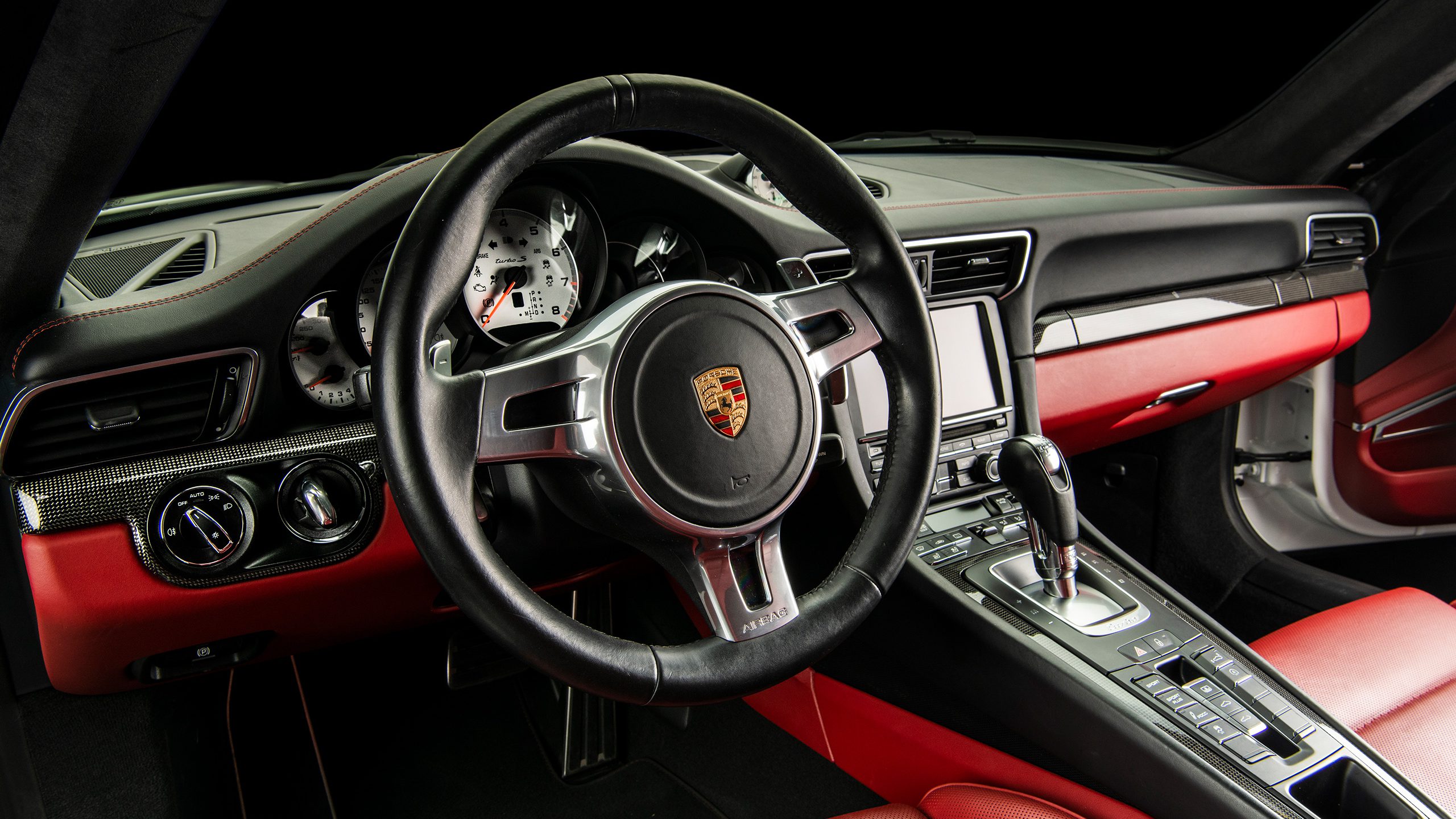 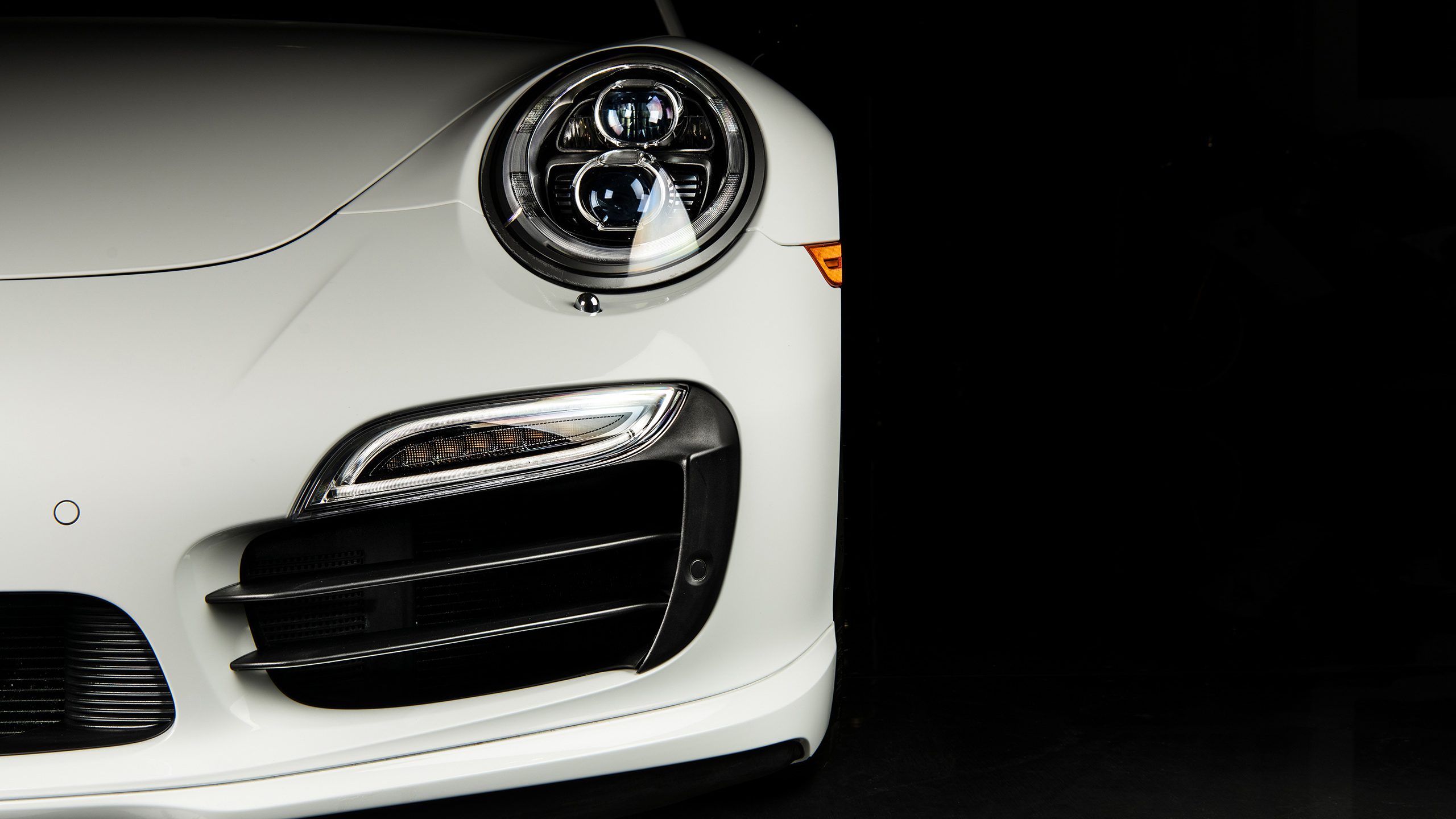 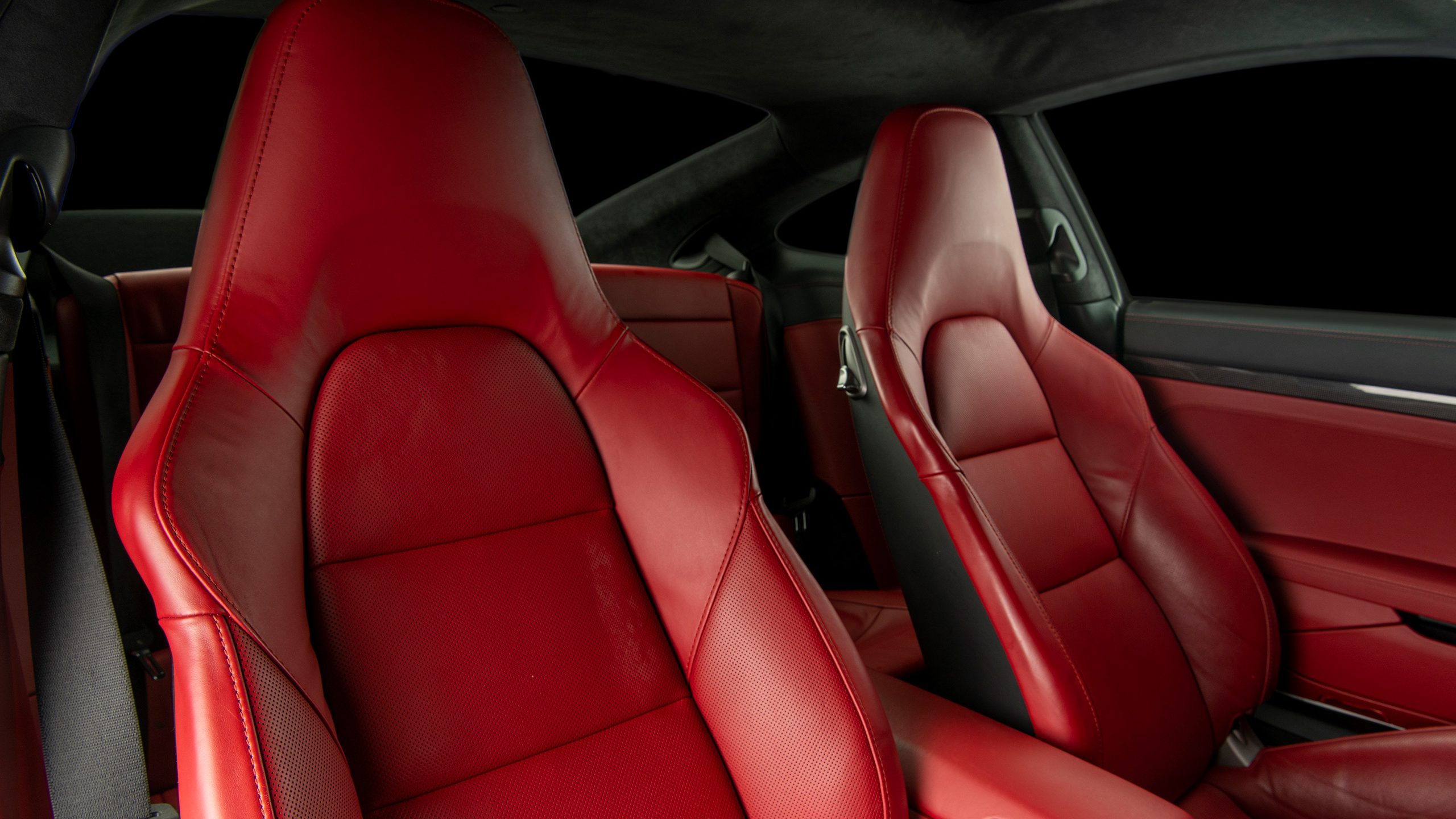 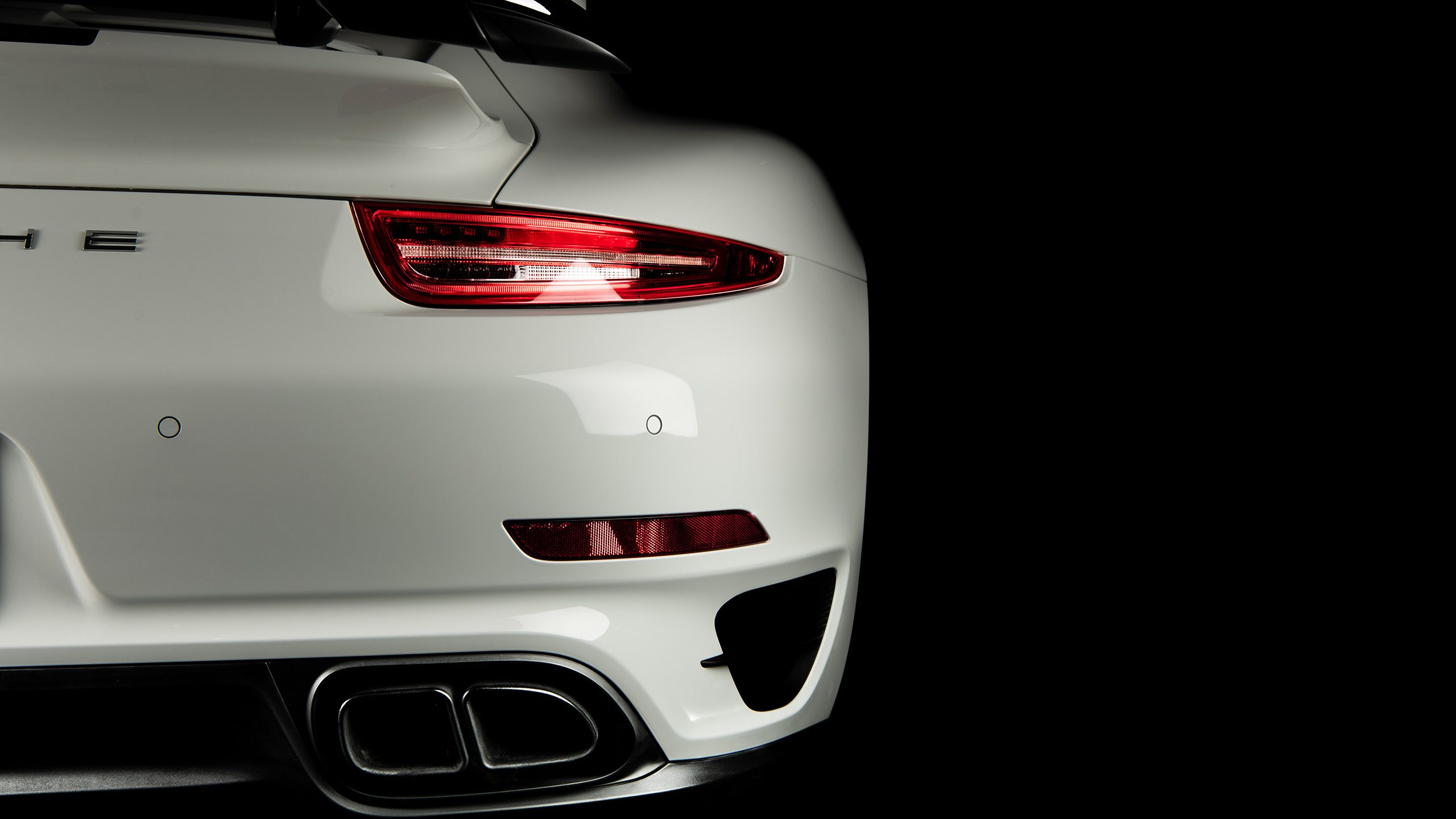 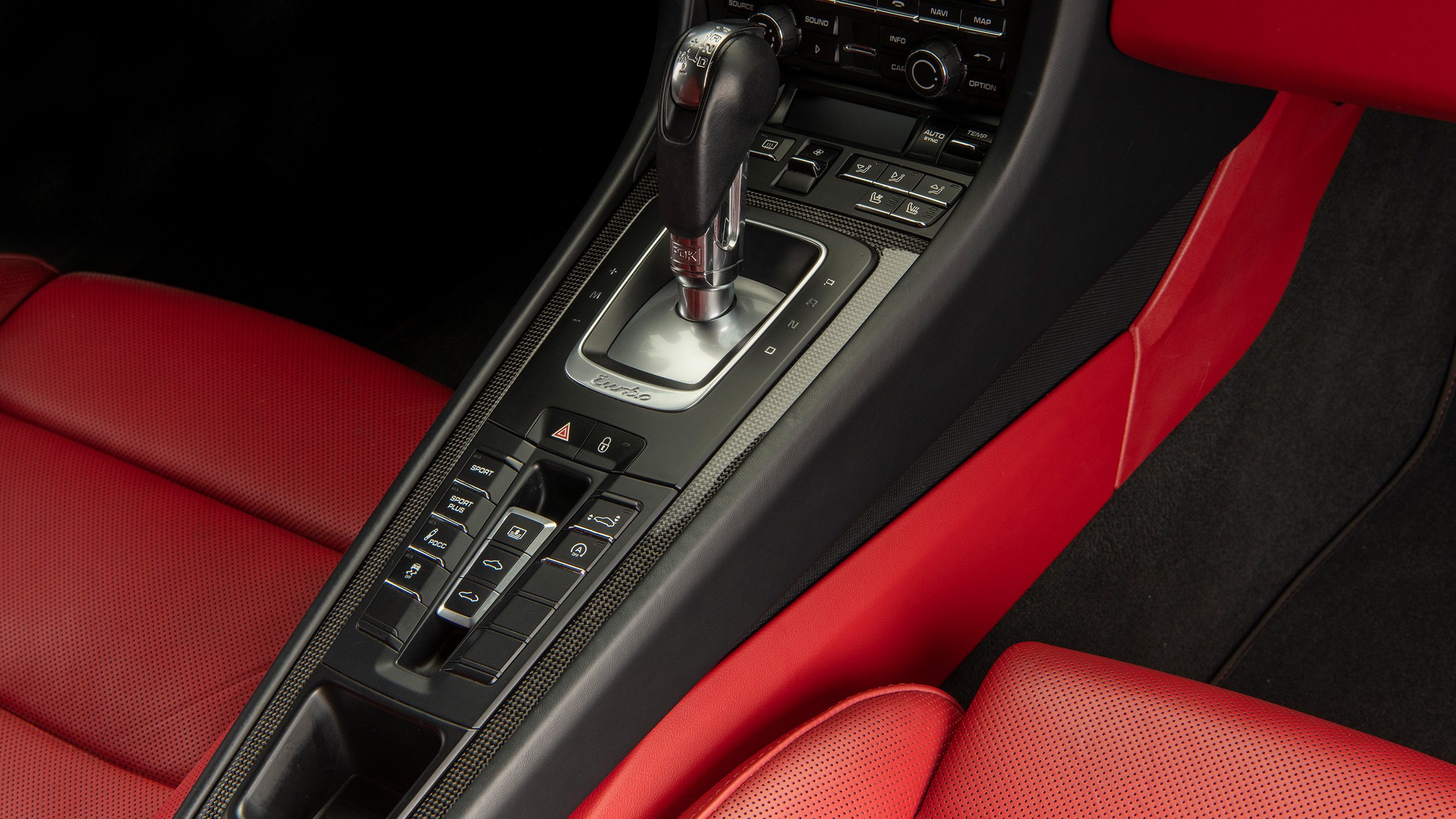 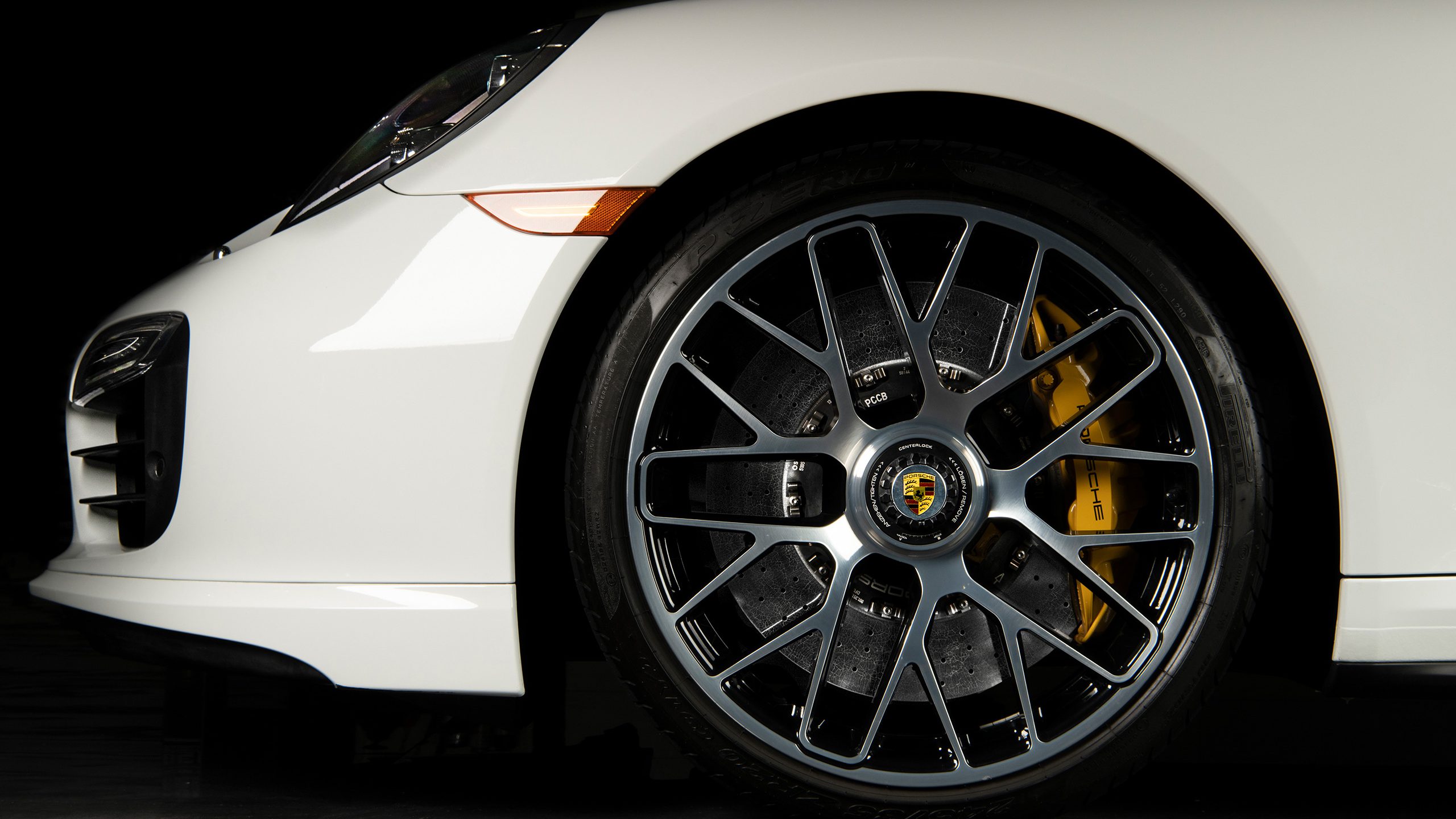 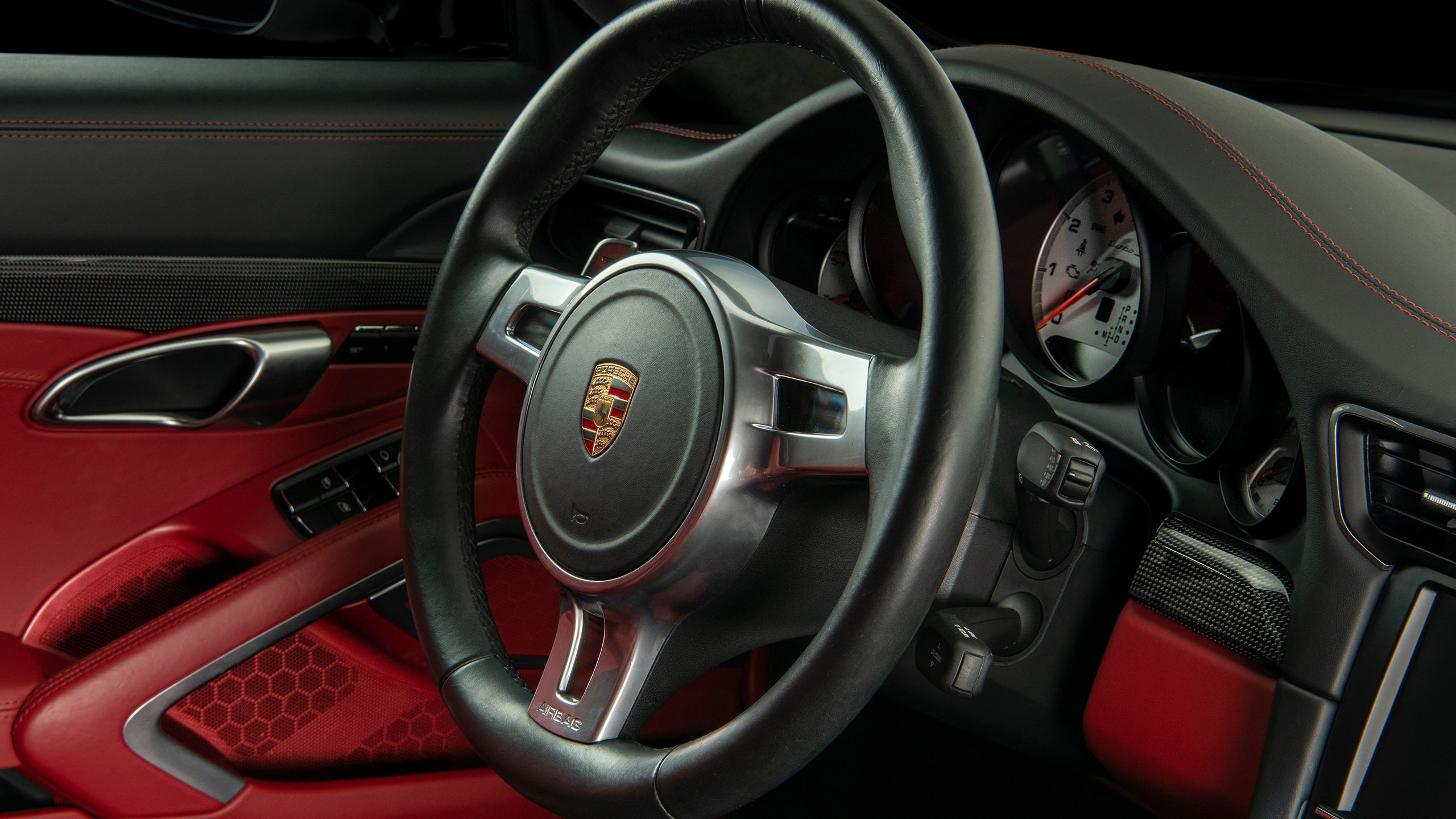 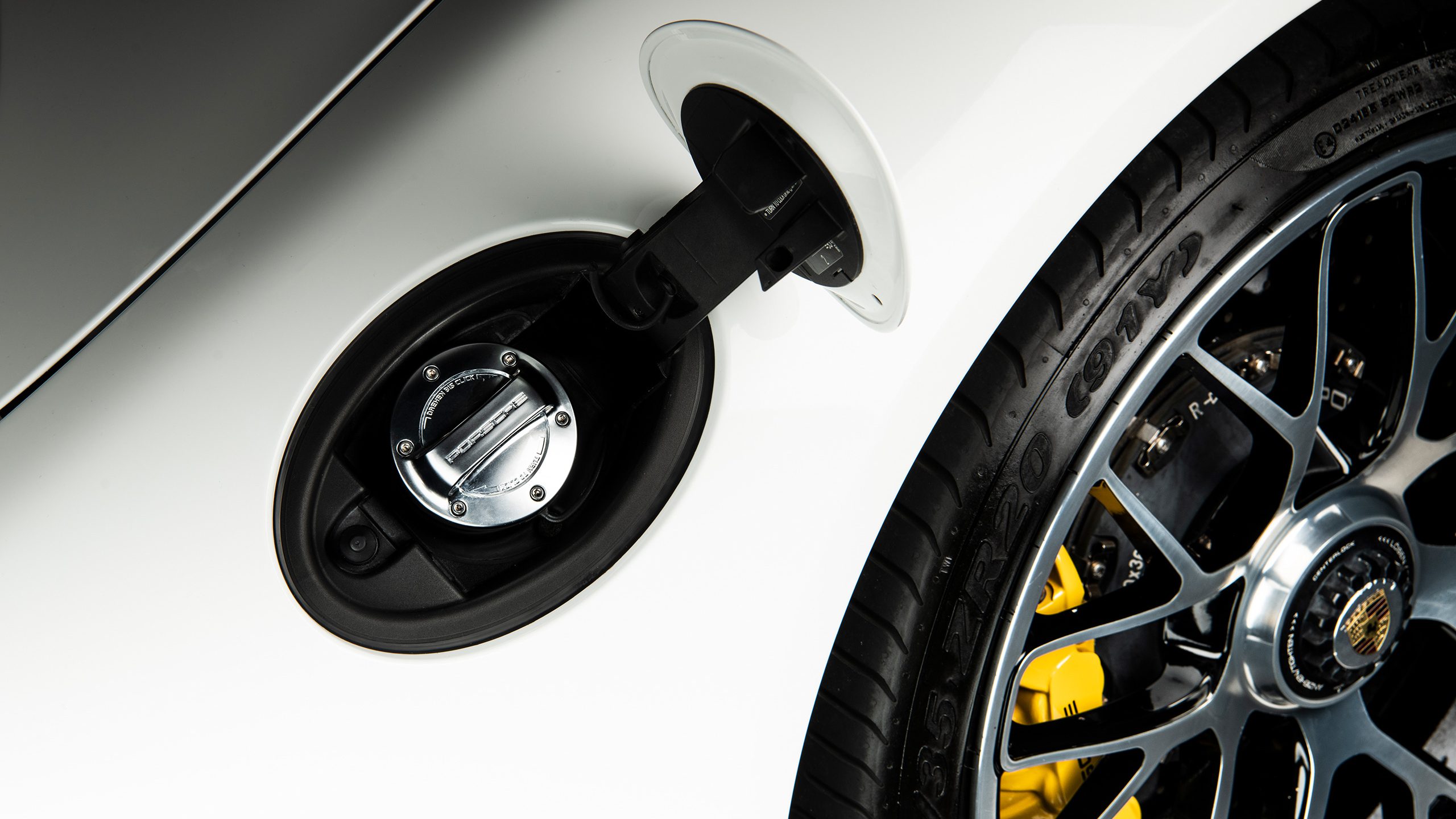 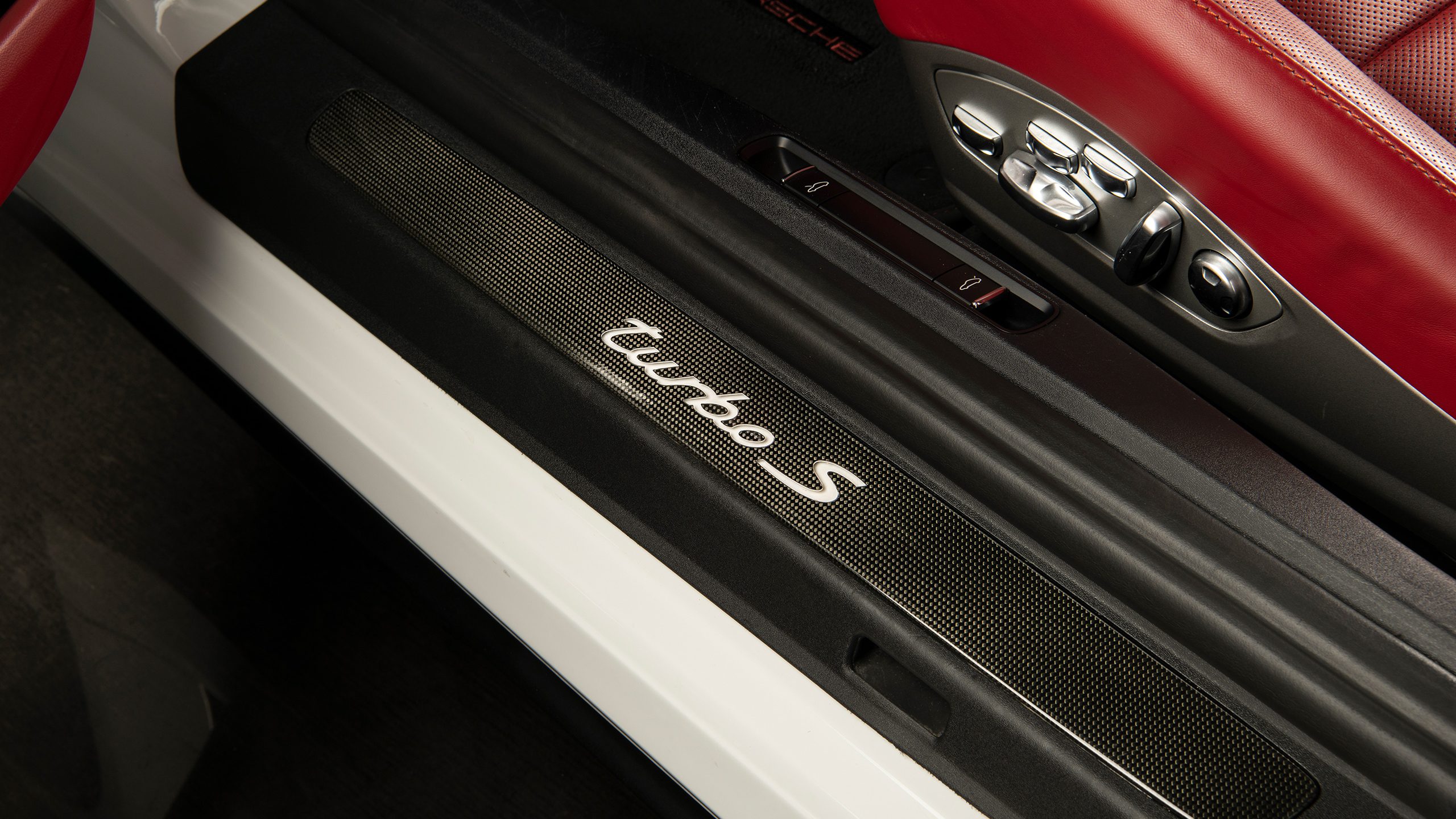 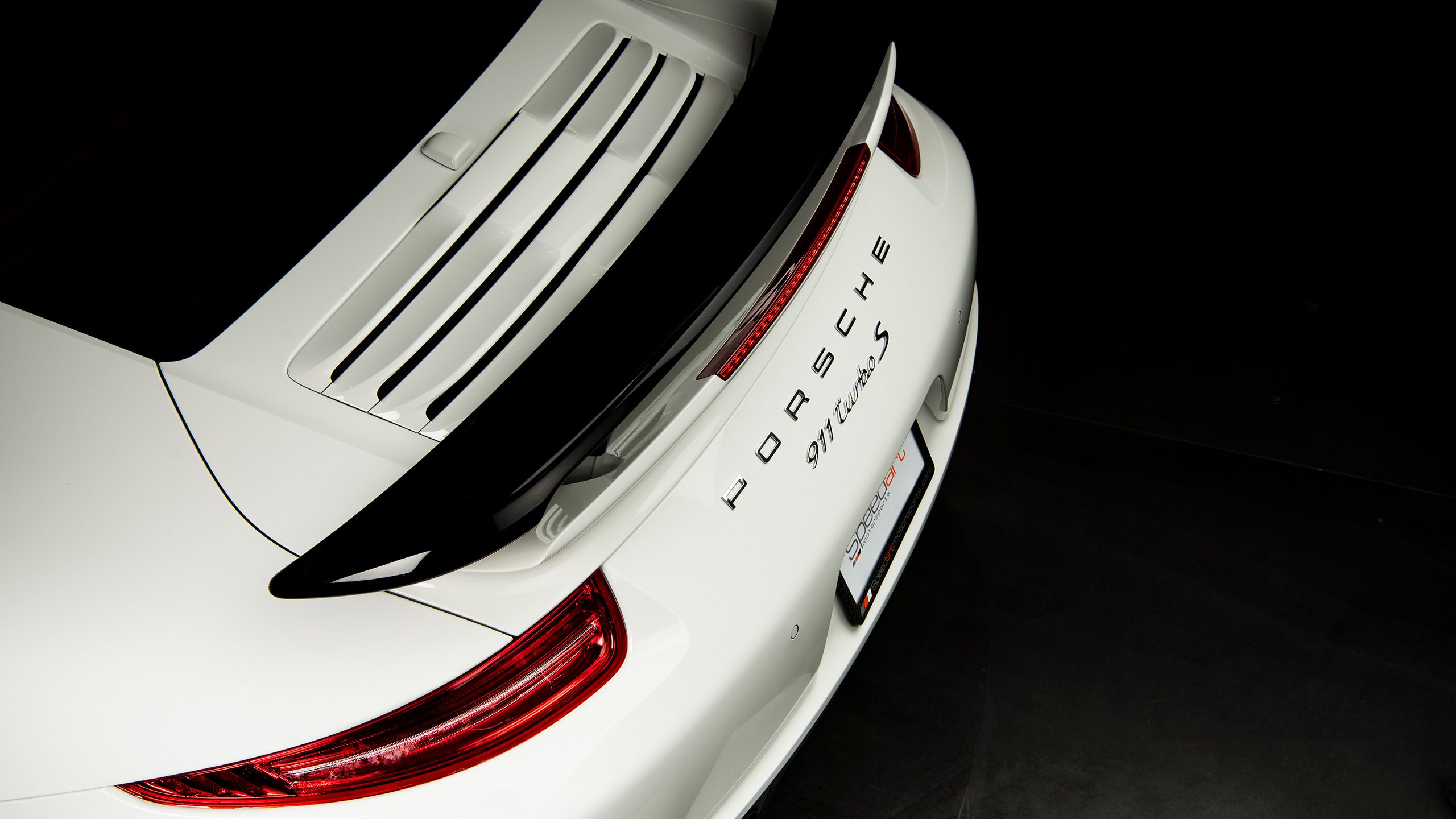 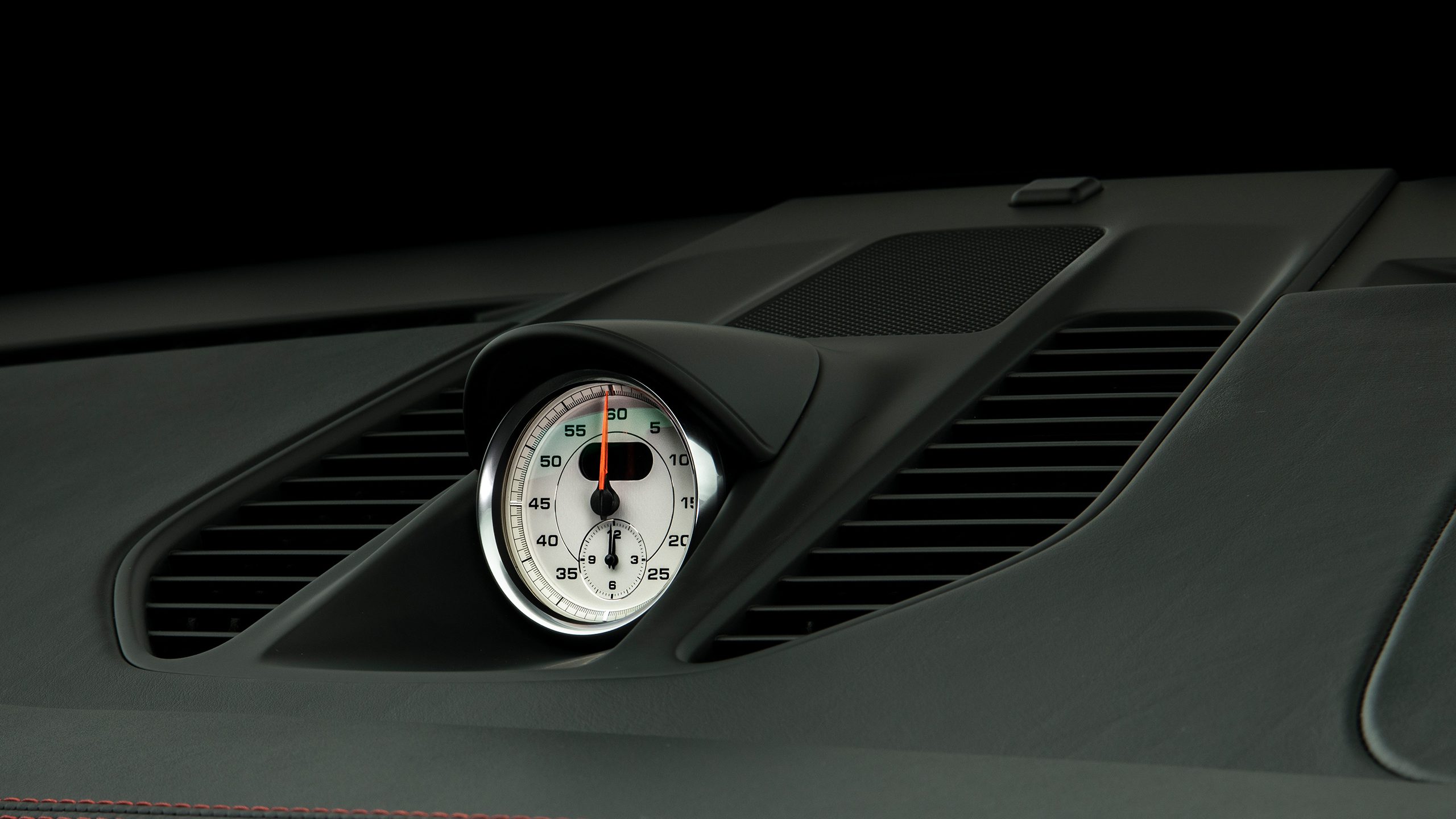 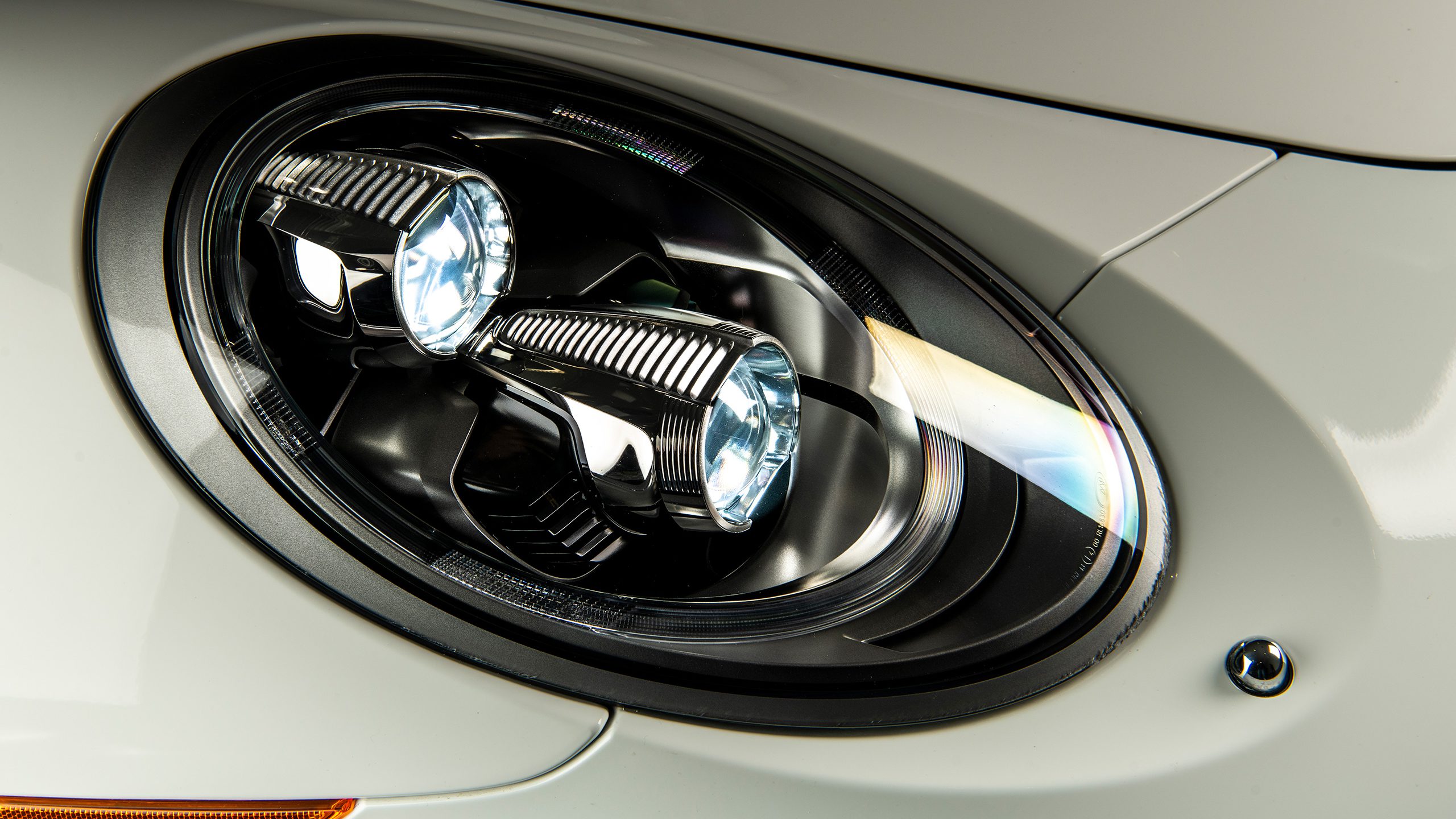 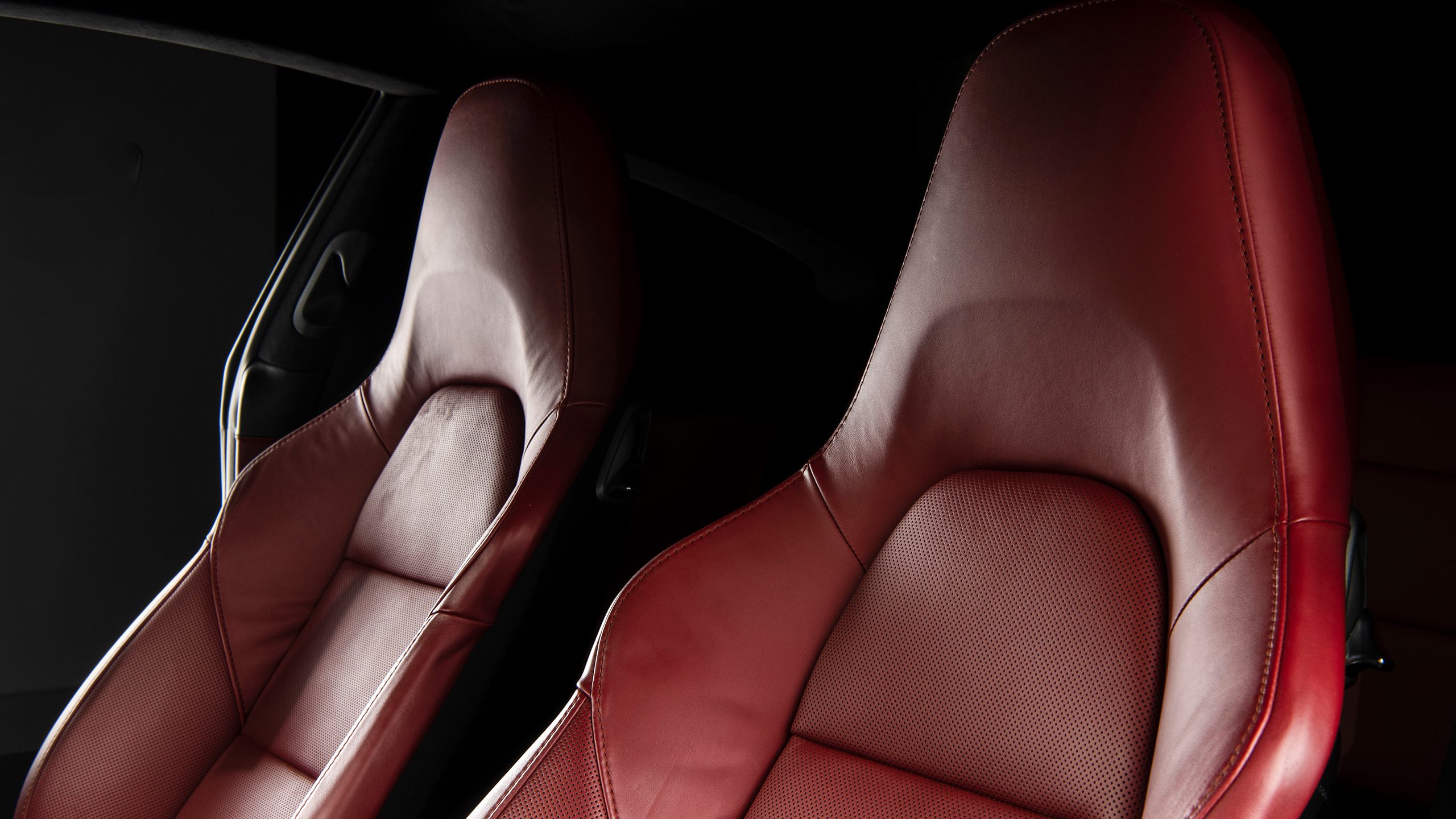 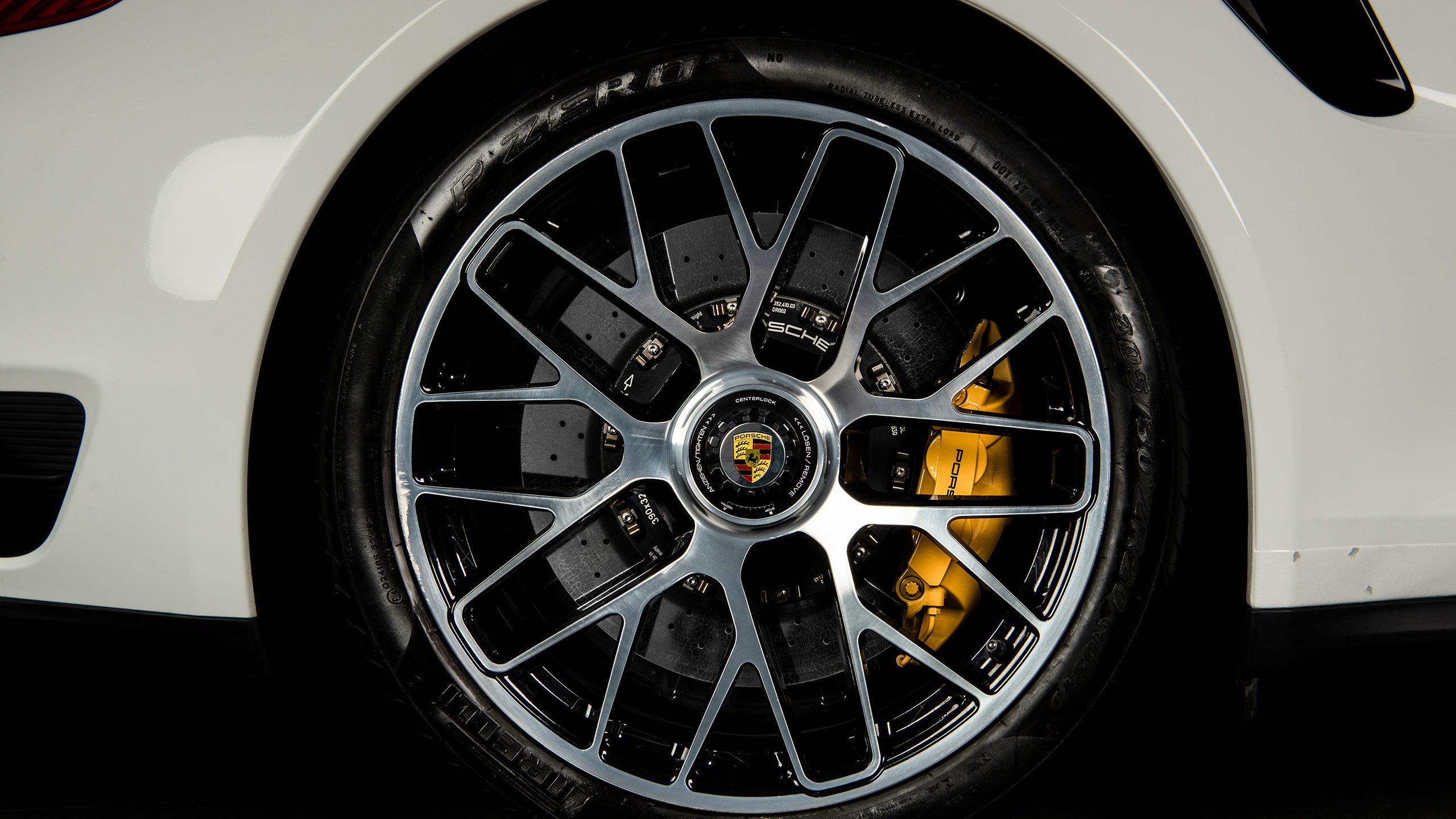 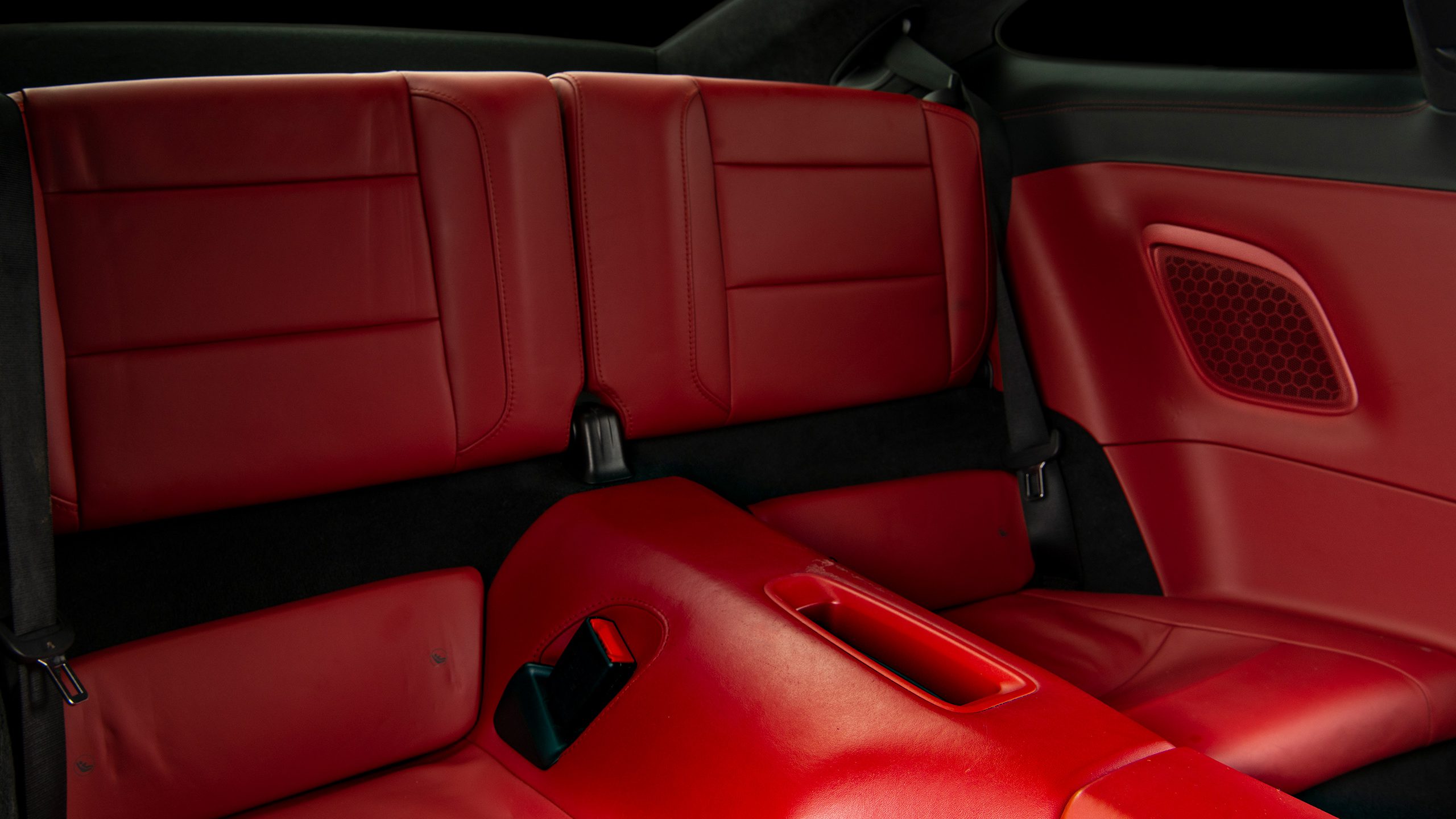 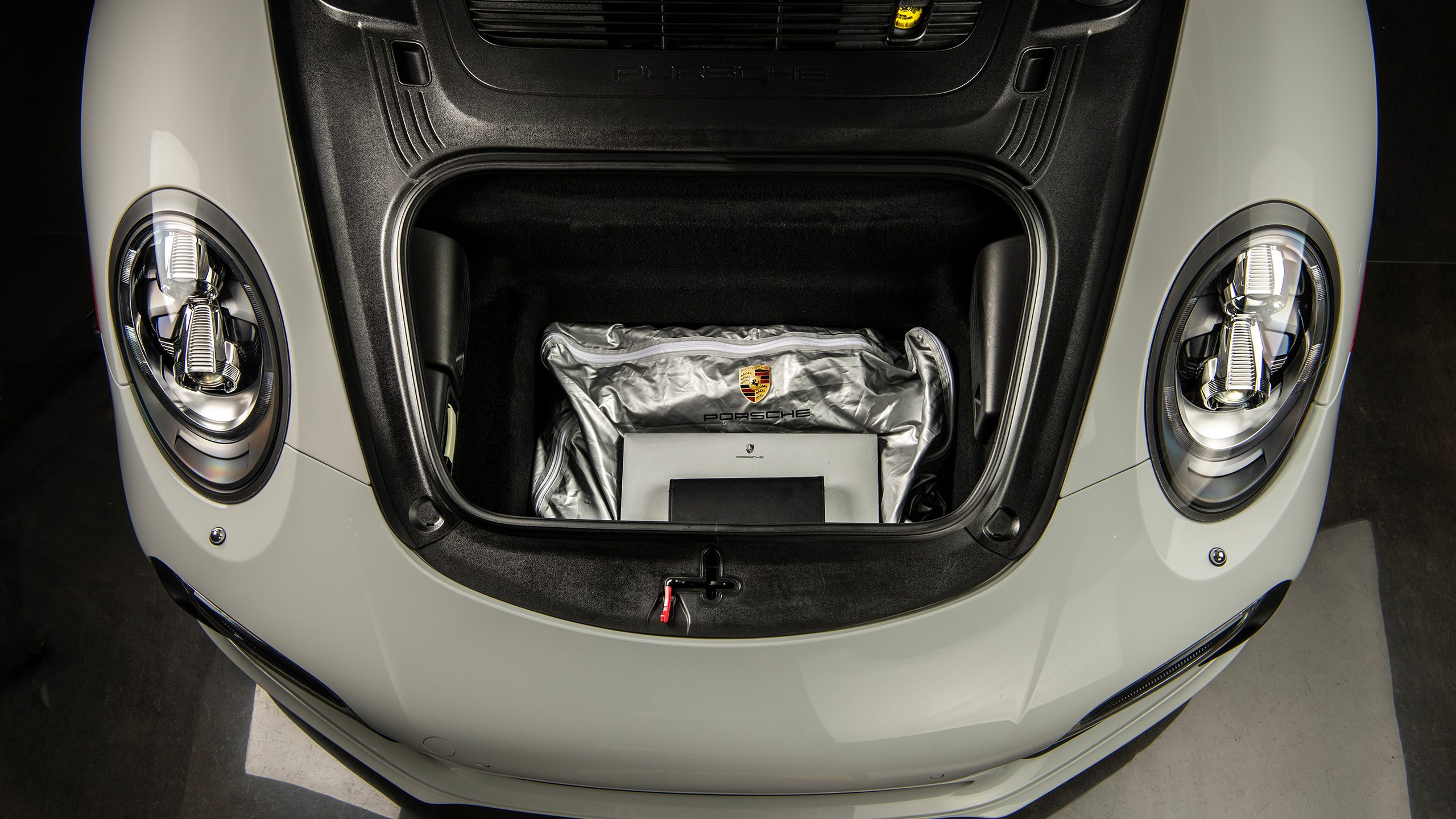 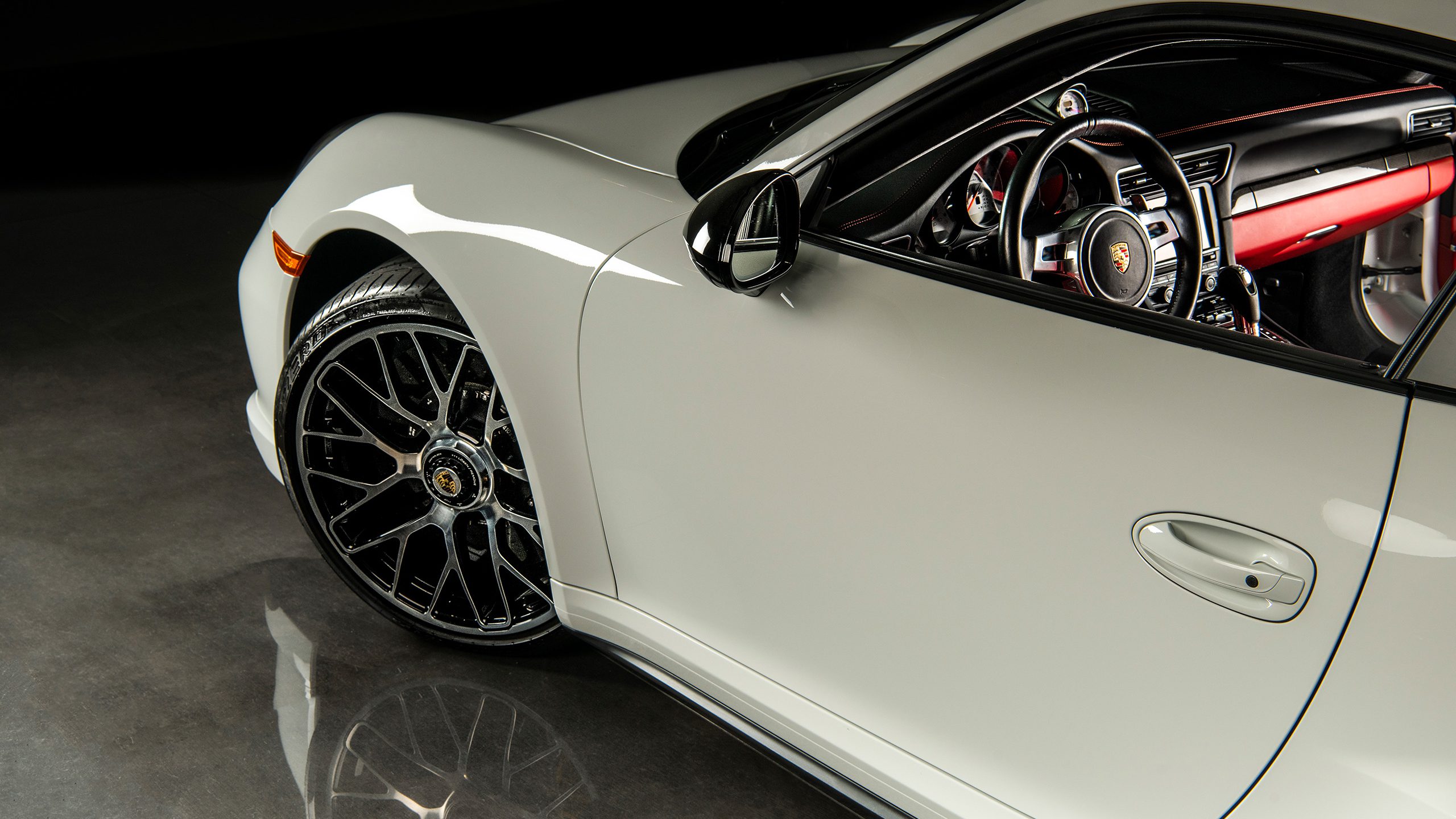 “Simply put, the 2014 Porsche 911 Turbo S was the fastest-accelerating road-going series production 911 at the time of its release – faster than the 911 GT3, faster than the manic 911 GT2 RS and faster even than the homologation version of the 1998 Le Mans winning 911 GT1. In fact, the 911 Turbo S type 991.1 in 2014 was the fastest-accelerating road car Porsche has ever placed into open-ended production, full stop. With an official 0-60 mph time of just 2.8 seconds, it is faster than the Ferrari 458 Italia, surely its keenest supercar rival, for outright straight-line pace. And that’s to say nothing of its claimed 0-124 mph time, quoted at 10.1 seconds”.

The turbo is fitted with an updated version of its predecessor’s twin-turbocharged 3.8-liter flat-six direct-injection gasoline engine with altered valve timing, revised pistons and increased combustion pressure. Sitting on motorsports-derived hydraulic mounts, the 911 Turbo S powerplant develops a hard-hitting 552 bhp. That’s 30 bhp more than the standard 911 Turbo along which it went on sale in the U.S. in September and, in keeping with the evolutionary process, some 29 bhp more than the old 911 Turbo S, which didn’t exactly come across as being in desperate need of any more firepower.

Torque, the defining facet of Zuffenhausen’s original supercar over the years, is also up, by 29 lb-ft over the standard 911 Turbo but is the same as that served up by its direct predecessor at 516 lb-ft. However, it is now delivered between 2,100 rpm and 4,250 rpm. In a new development that brings an added dimension to the driving experience, there’s now an overboost function that serves to liberate even greater shove when the conditions permit. It increases the engine’s nominal 17.5 psi of turbocharger boost pressure, taking it up to 20.3 psi and ramping up the torque rating to 553 lb-ft for momentary bursts of full-throttle acceleration between 2,200-4,000 rpm.

First impressions of the 991.1 revealed a significantly more fluid nature to the handling than the old model, with even less body roll, a clear lift in overall agility, greater levels of purchase and mind-boggling traction as you get on the throttle out of corners owing in part to the inclusion of that torque vectoring function. There’s an almost clinical competency to the way this Porsche can be made to dissect challenging sections of blacktop. It romps from one apex to the next with rabid enthusiasm seemingly without any clear limit to its dynamic prowess and great neutrality. Its ability to carry big speeds through a series of corners without any premature breakaway is simply stunning – clearly on a higher level than its rear-wheel drive sibling, which is arguably more fun to drive in isolation but not quite in the same league on pure ground-covering intent.

Arguably better looking, a good deal roomier, more powerful, subjectively faster over any given road, infinitely more stable at speed, better riding and more engagingly agile, too: The new Porsche is a fantastically exciting car. It’s also more sensible as an everyday proposition than a 458 Italia, for sure.

Speedart Motorsports is pleased to offer for your consideration this sensational Autobahn Express, and available for immediate delivery.

Chassis No. 7610 went in to production on March 2014 under commission number 651036 and rolled off the Zuffenhausen assembly line on the last week of April 2014. The kardex of this dazzling 911 is comprised of the following paid options of the already heavily optioned Turbo S, with the corresponding factory coding, totaling a $10,980 addendum:

The 2014 Turbo S was ordered by its first owner through the Porsche Center of Coral Gables, Florida and registered upon its arrival on May 21, 2014. The car was traded for a newer model back to the original selling dealer and it was then retailed to its second owner on February 2016 with 6,164 miles on the odometer. It was subsequently sold to its third and last owner, an automotive executive and prominent sports car enthusiast which enjoyed the car sparingly on weekends by accumulating less than six thousand miles in a 5 year time span.

For the extra peace of mind, the last custodian of the Turbo S decided to certify the automobile on May 21, 2020 and opted for the Platinum Protection Plan at a cost of $4,258 in addition to all service costs in order for the 911 to qualify for the factory program. As such, the motorcar is covered for 48 months from the time of issuance and valid until May 21, 2024 or 48,000 miles.

The odometer currently displays 12,188 careful miles, never raced on or off a circuit with the last service performed at the Porsche Authorized Center on February 26, 2021 with 11,939 miles at the time of servicing. The motorcar is free of any incidents with the original paint intact and minimum wear, attesting to the low mileage use and substantiated by a non-derogatory Carfax report that may be supplied upon request.

The sale of the 2014 911 Turbo S is accompanied by all keys, Porsche Certificate of Authenticity, owners & service manuals, branded indoor car cover, Pre-Owned Certification binder with presentation box and  additional equipment as supplied by the manufacturer.

Speedart Motorsports invites all serious inquiries and interested parties to witness up-close and personal this formidable GT at our Design District motorsports gallery.