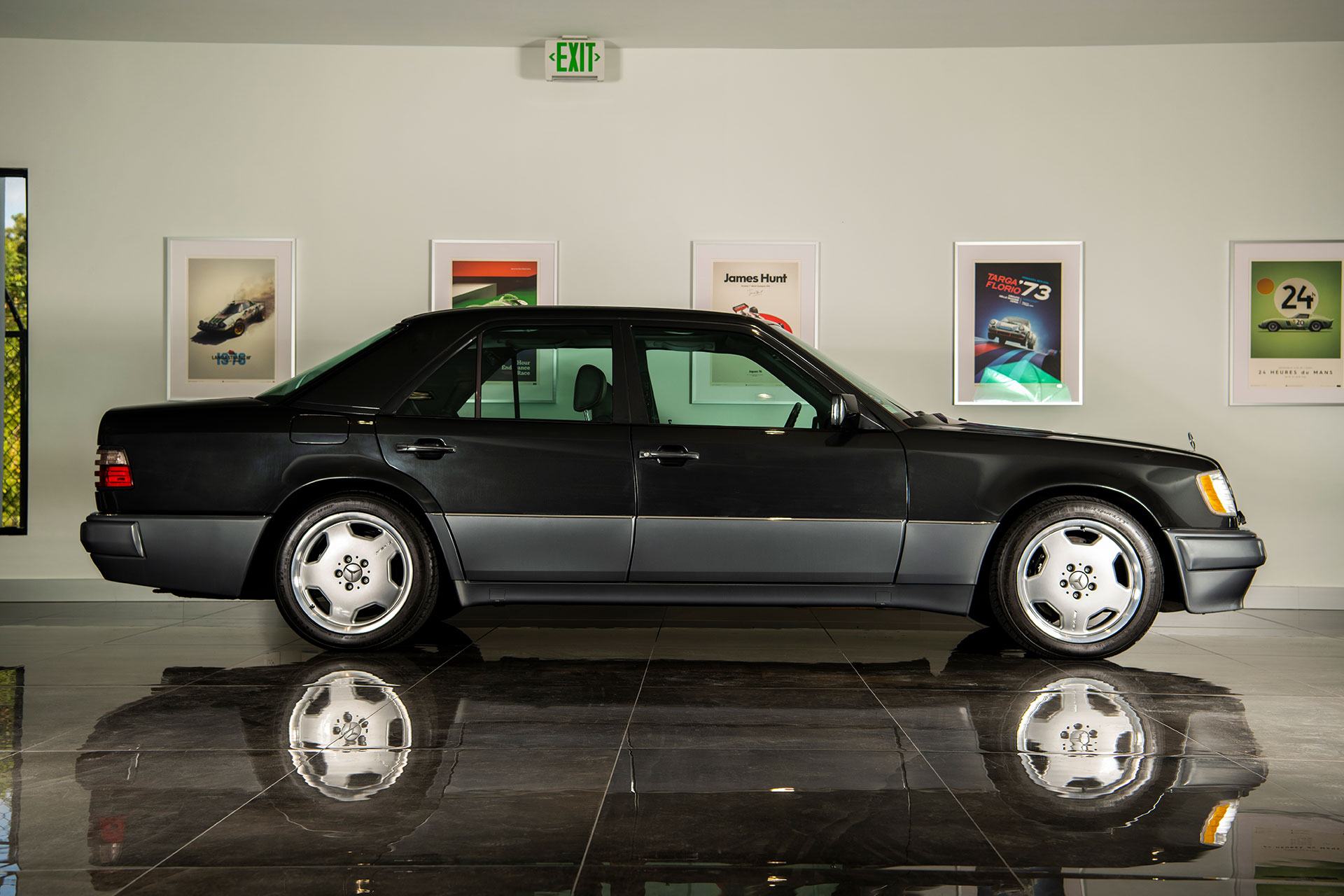 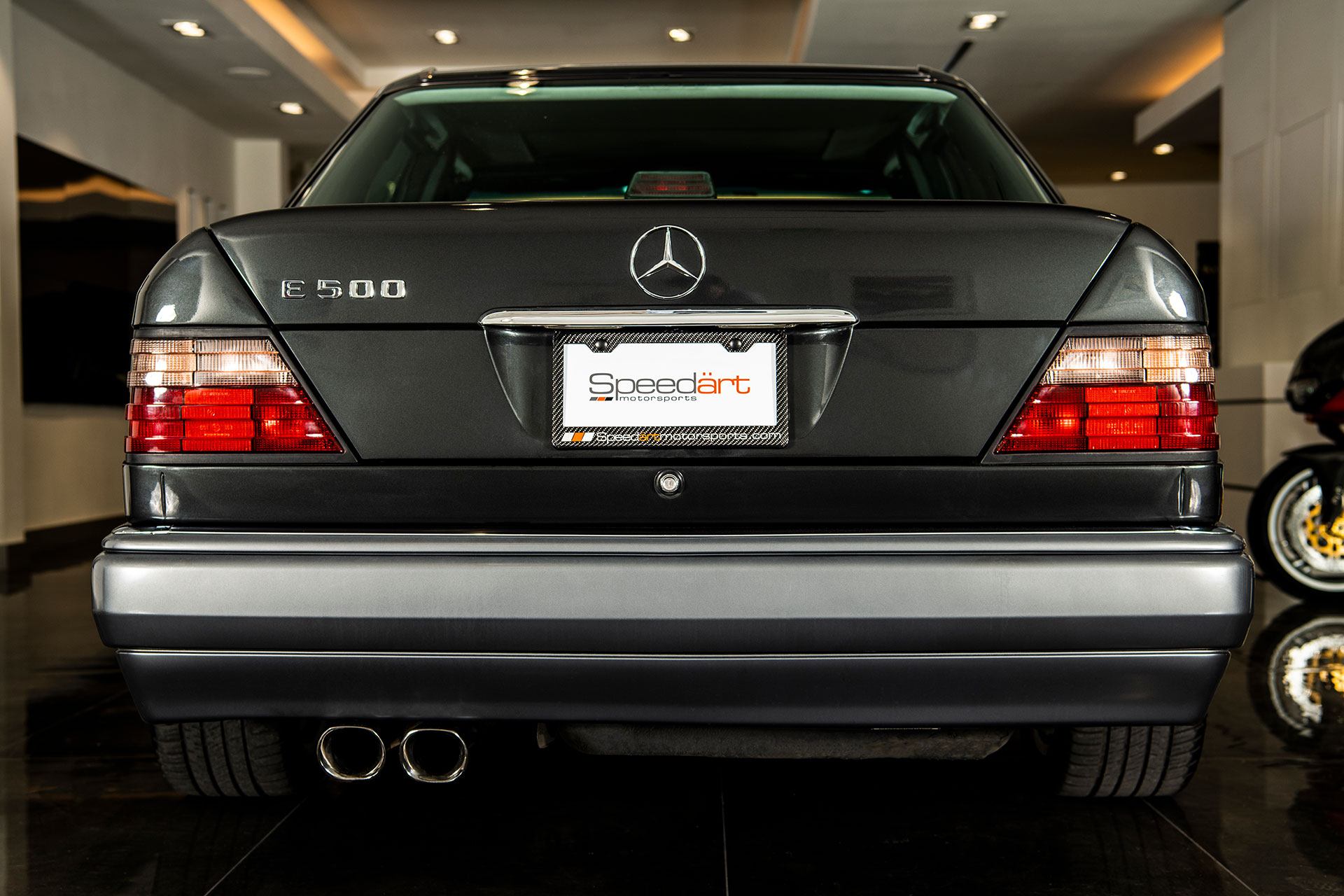 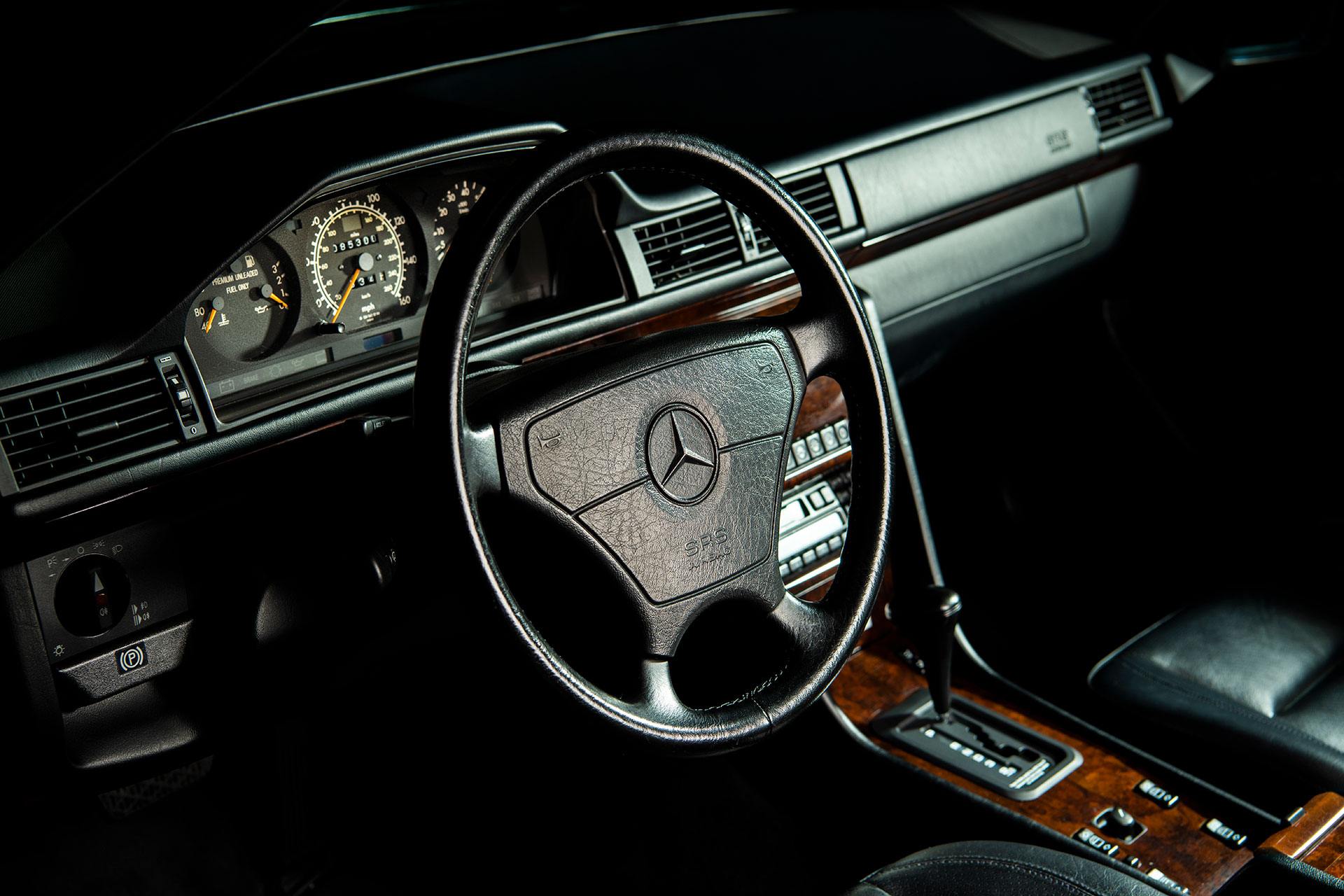 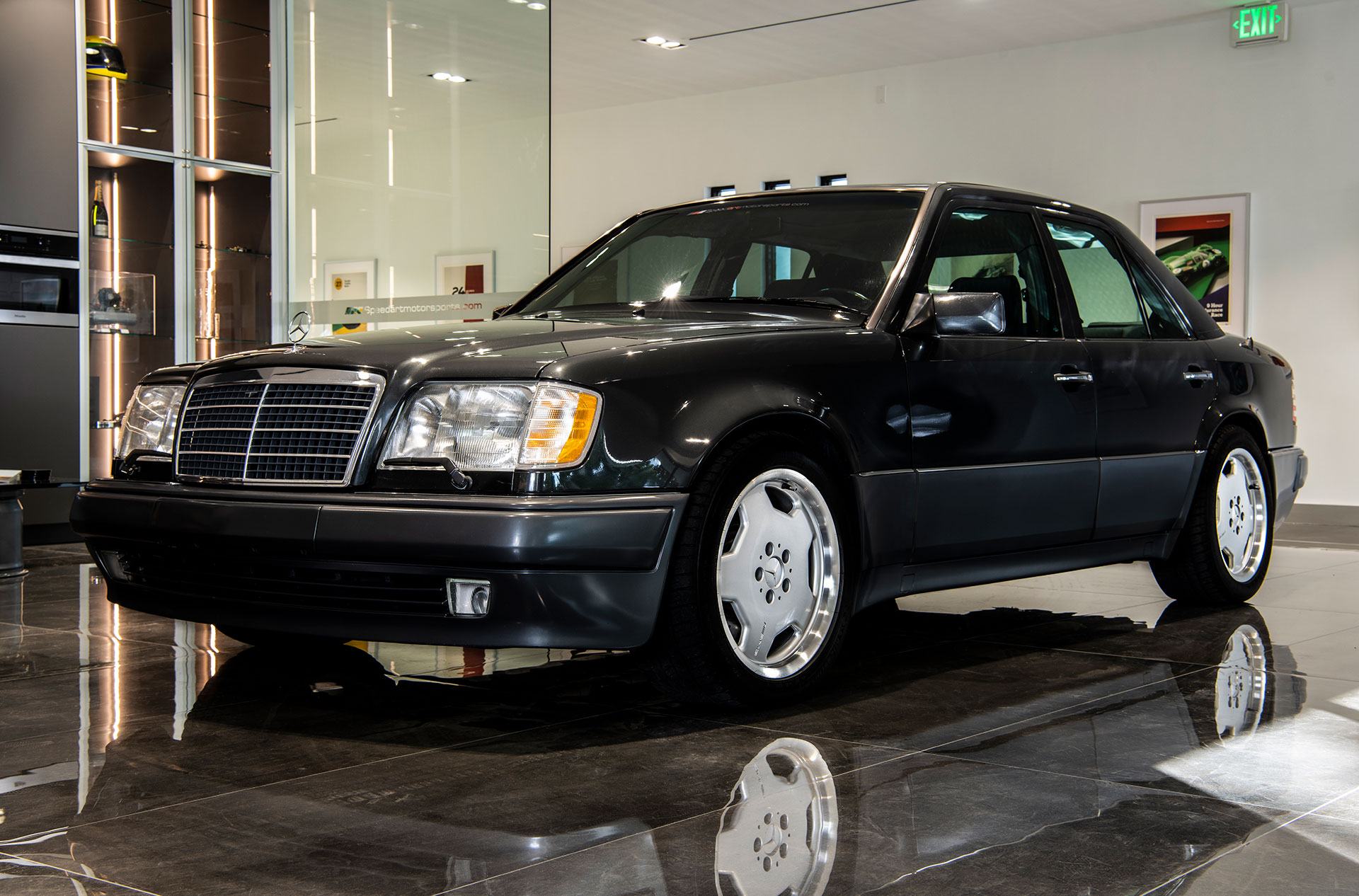 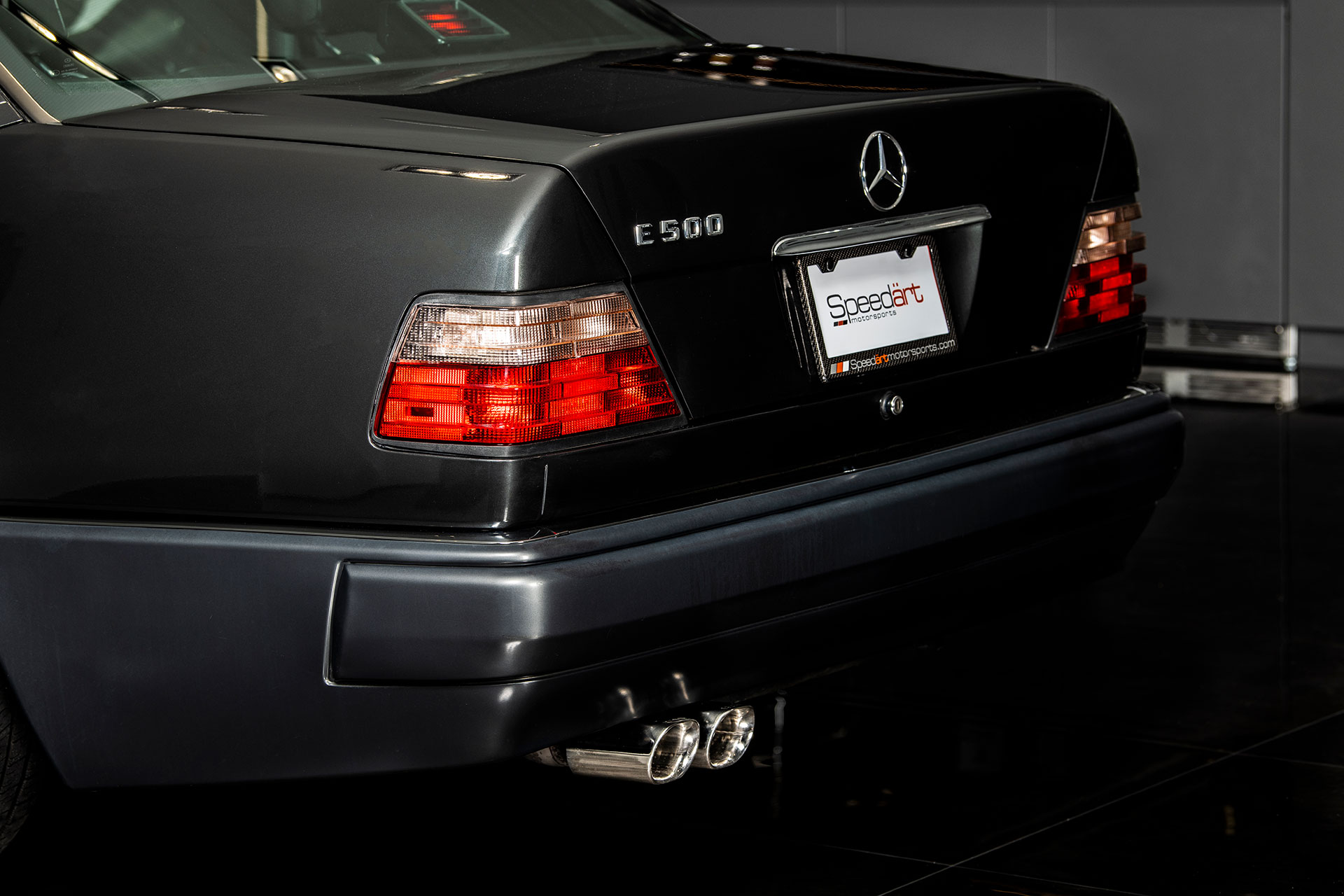 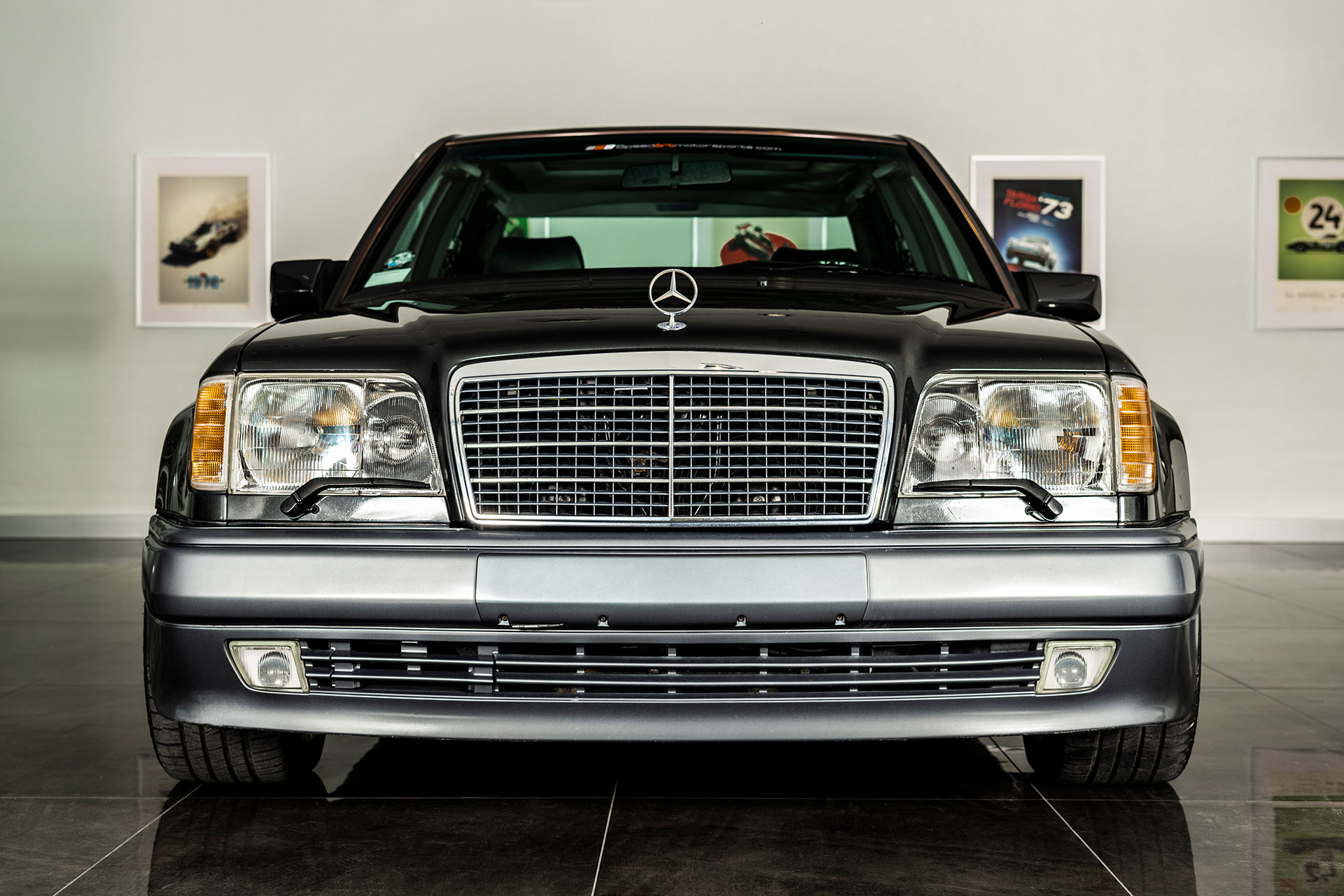 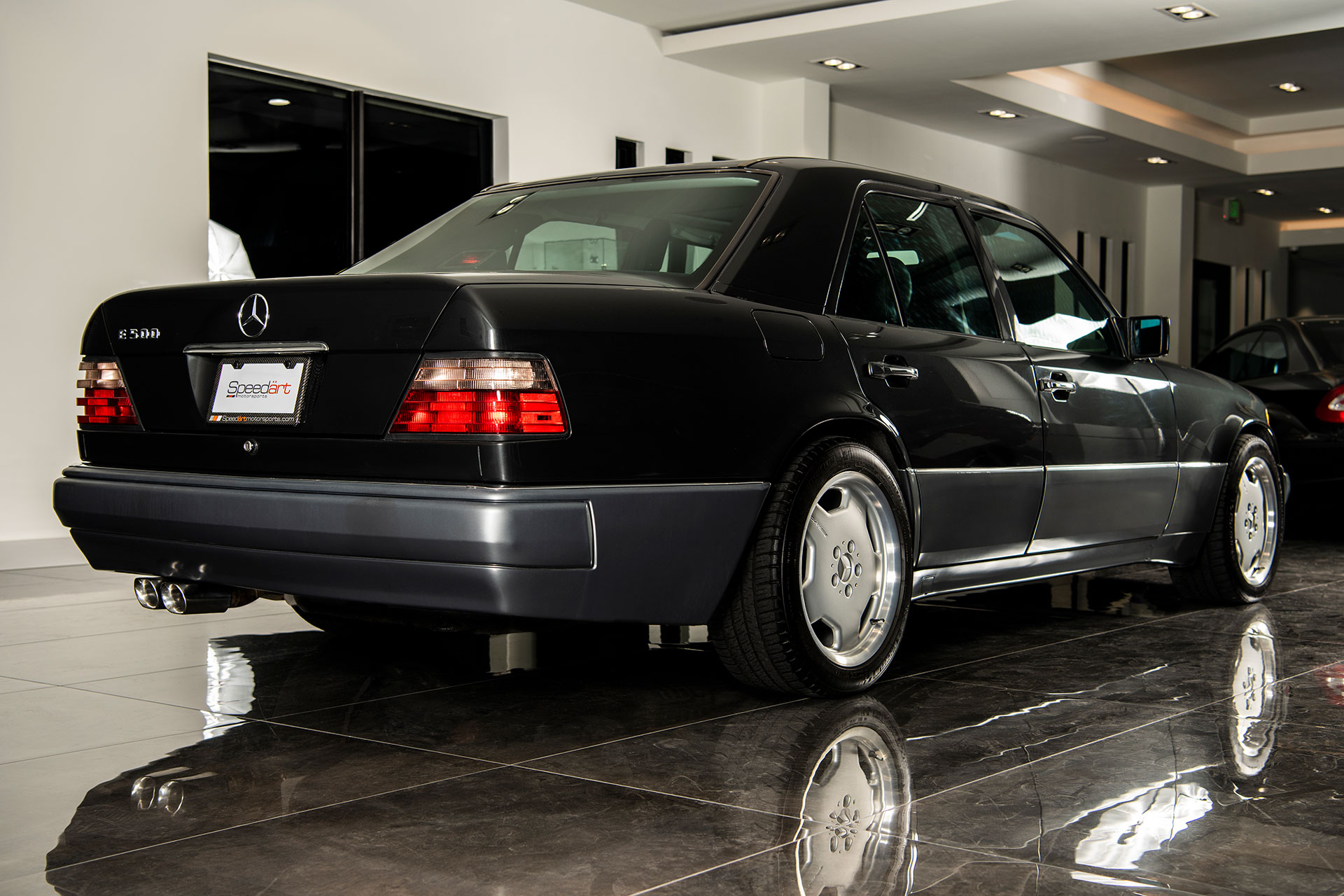 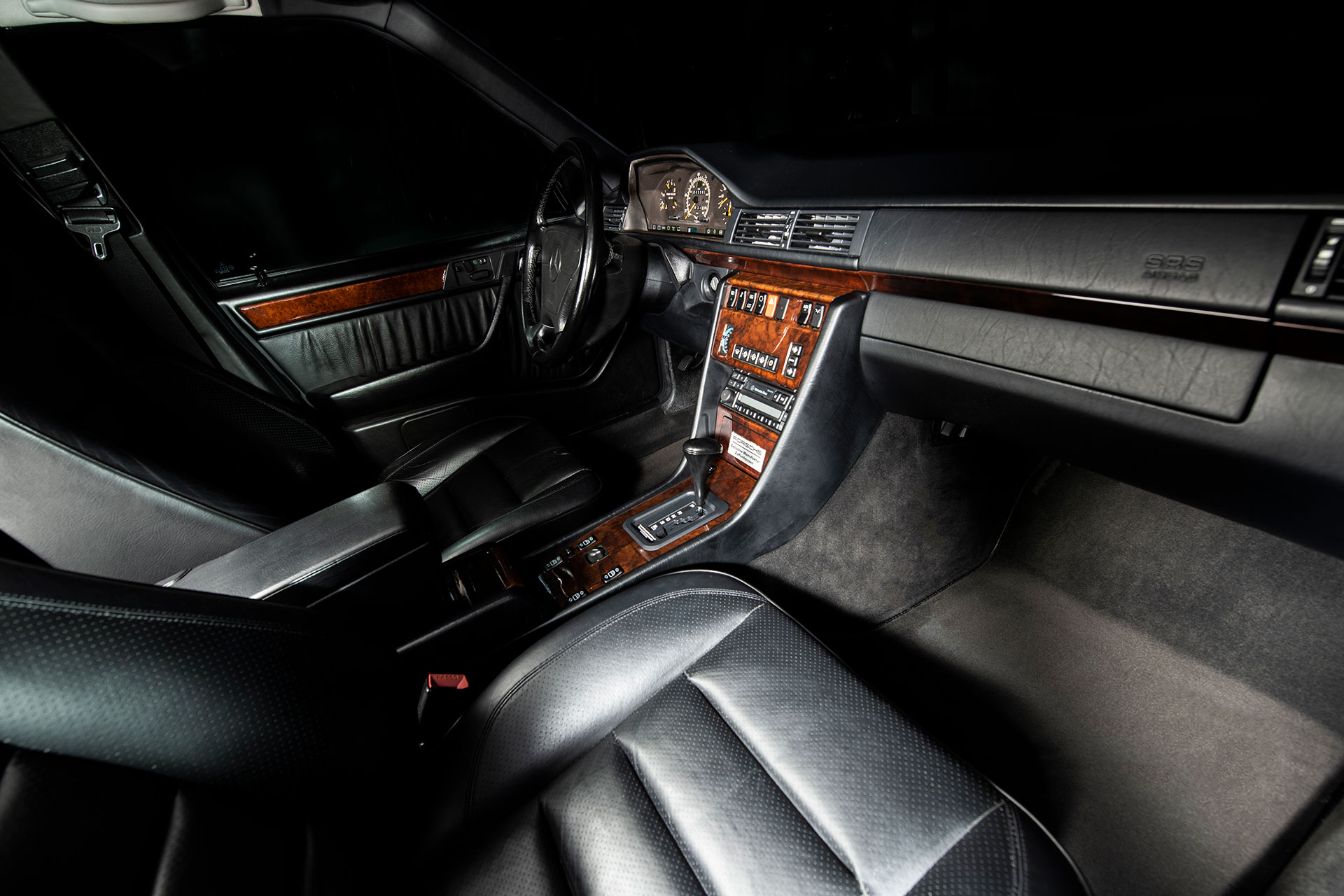 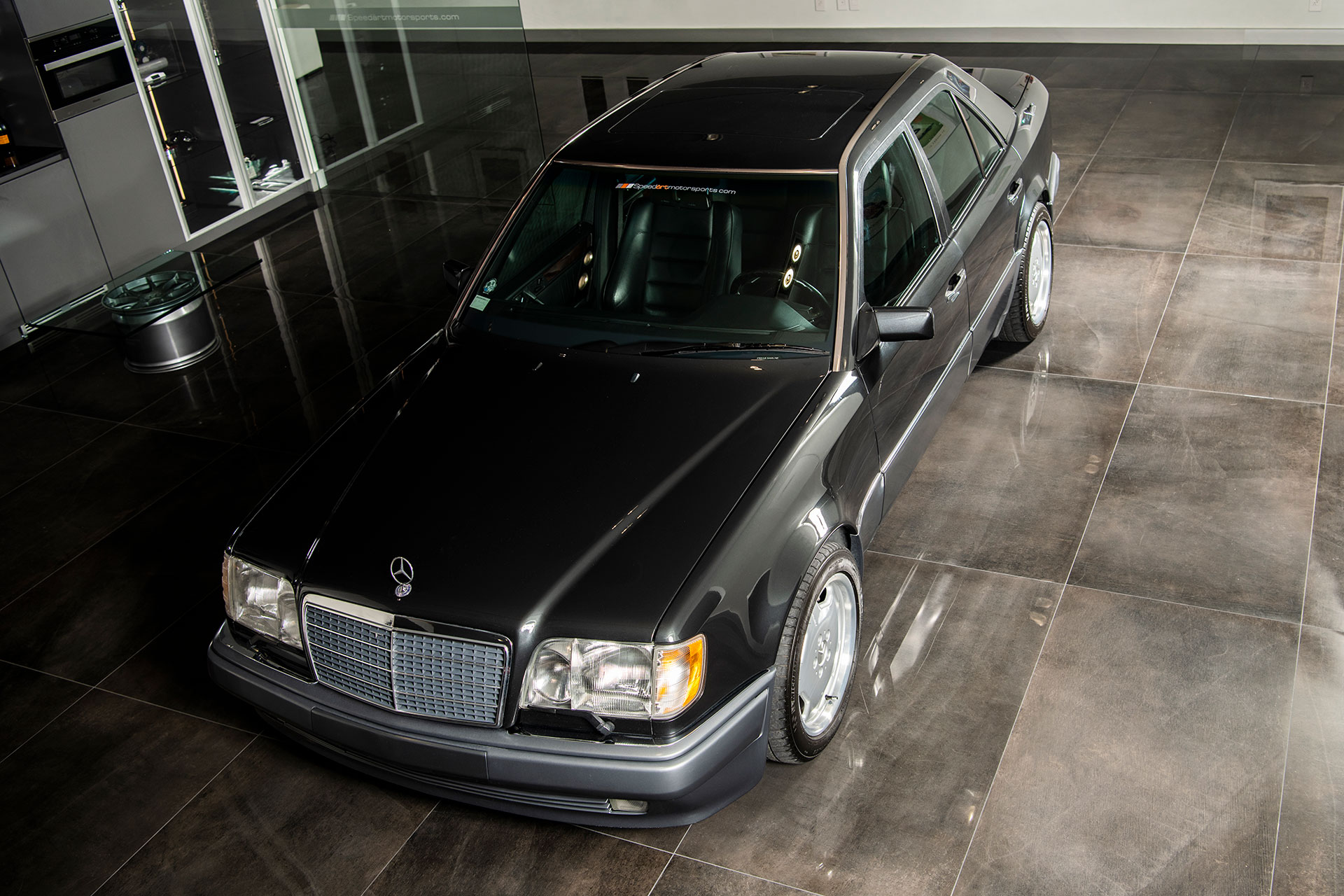 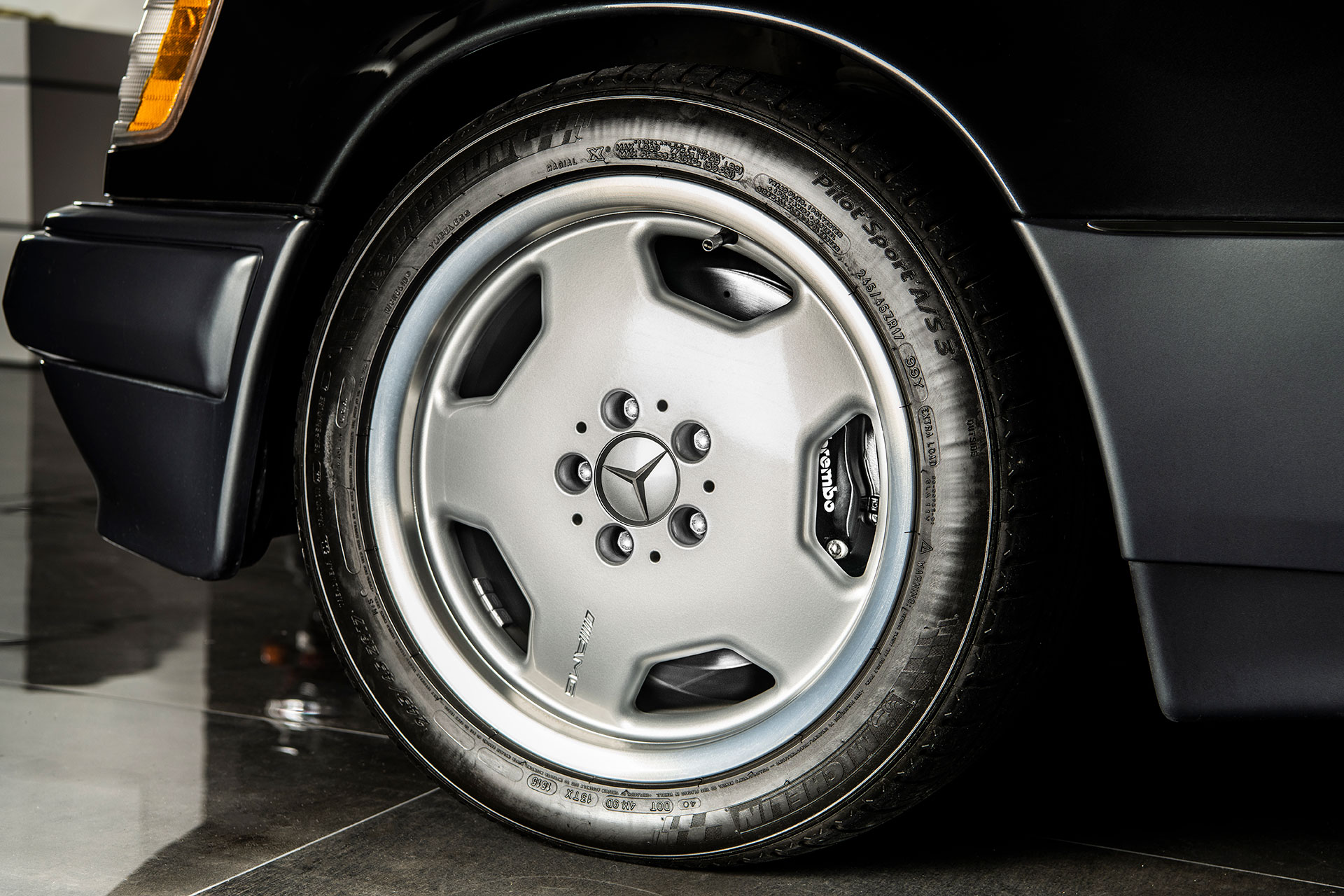 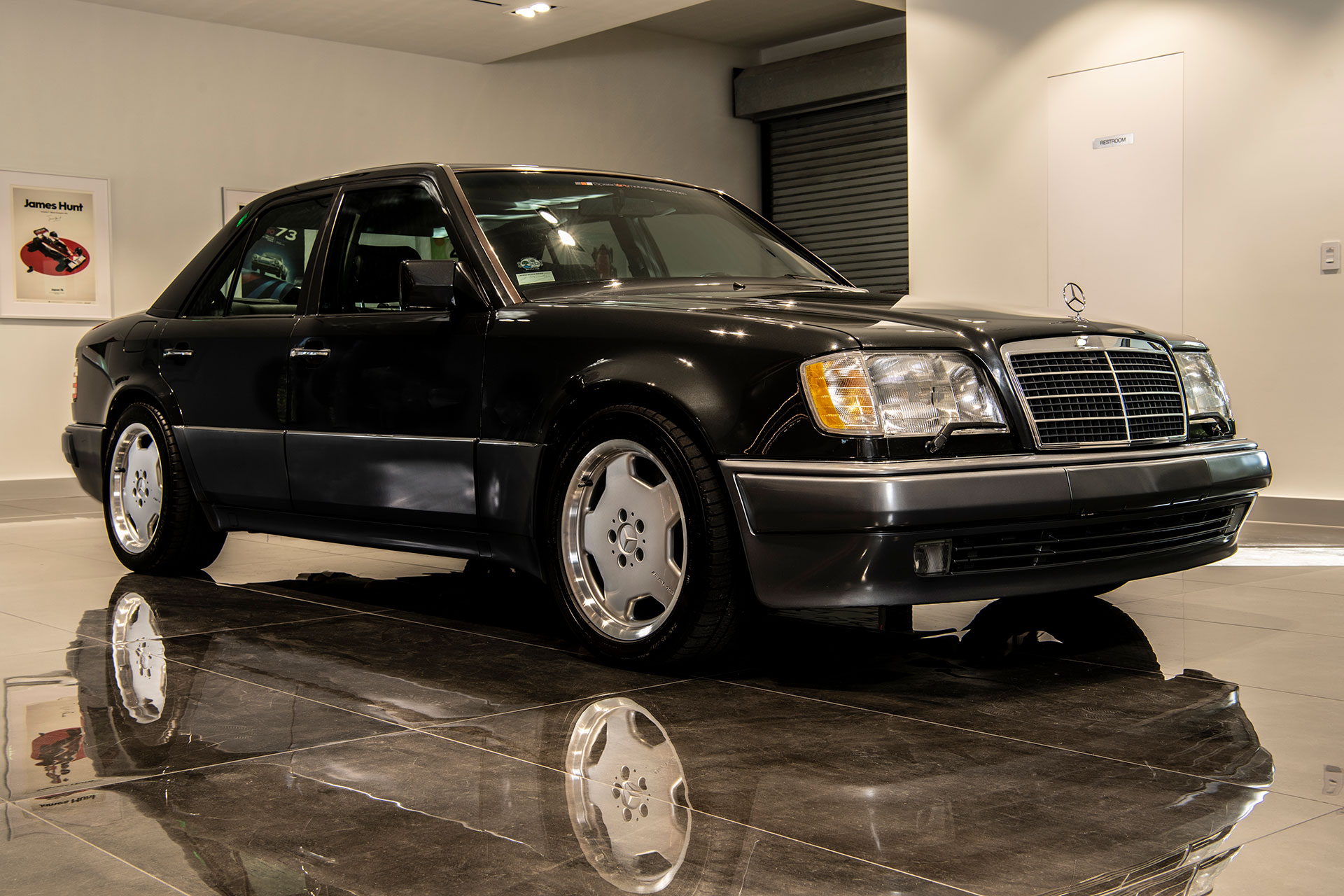 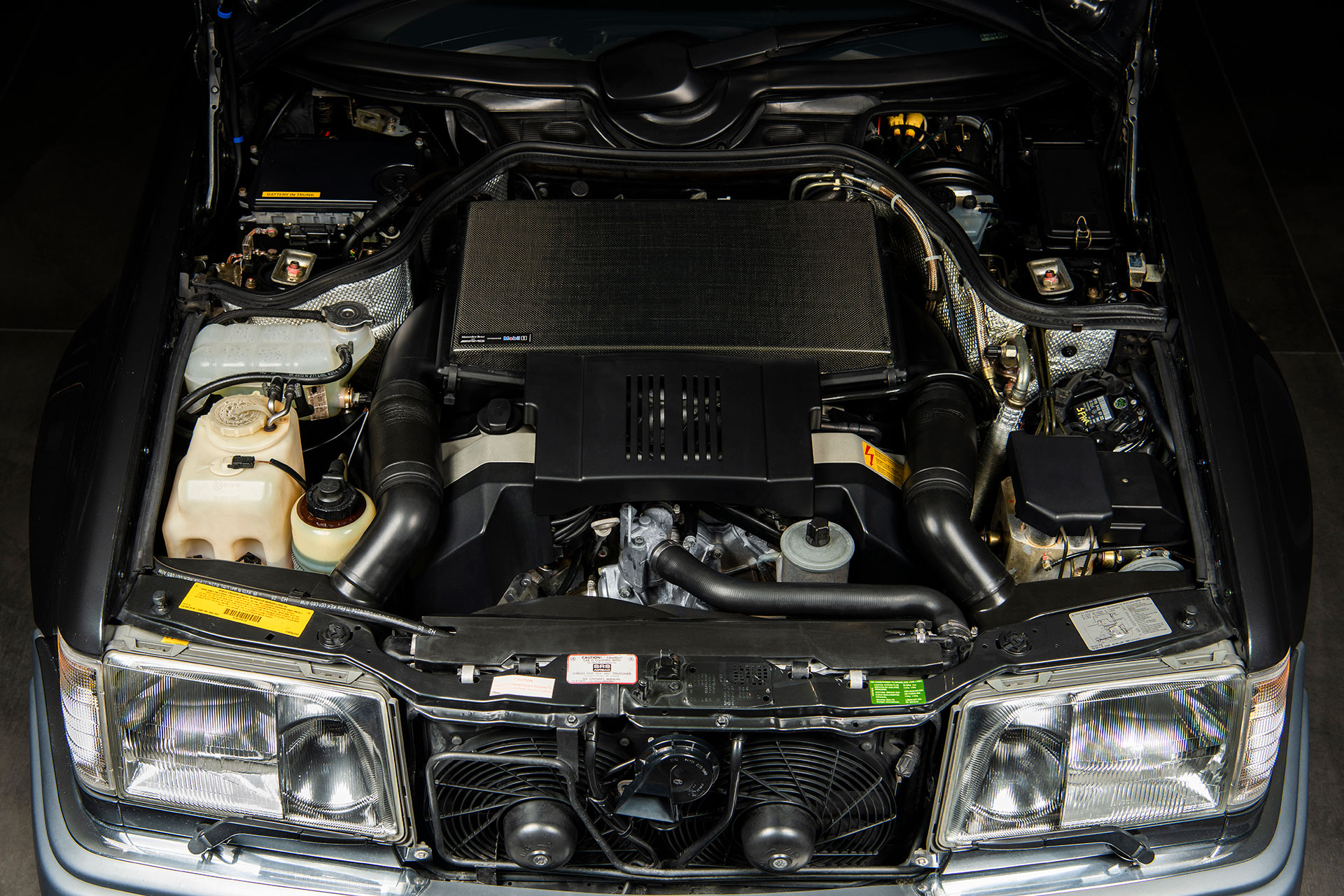 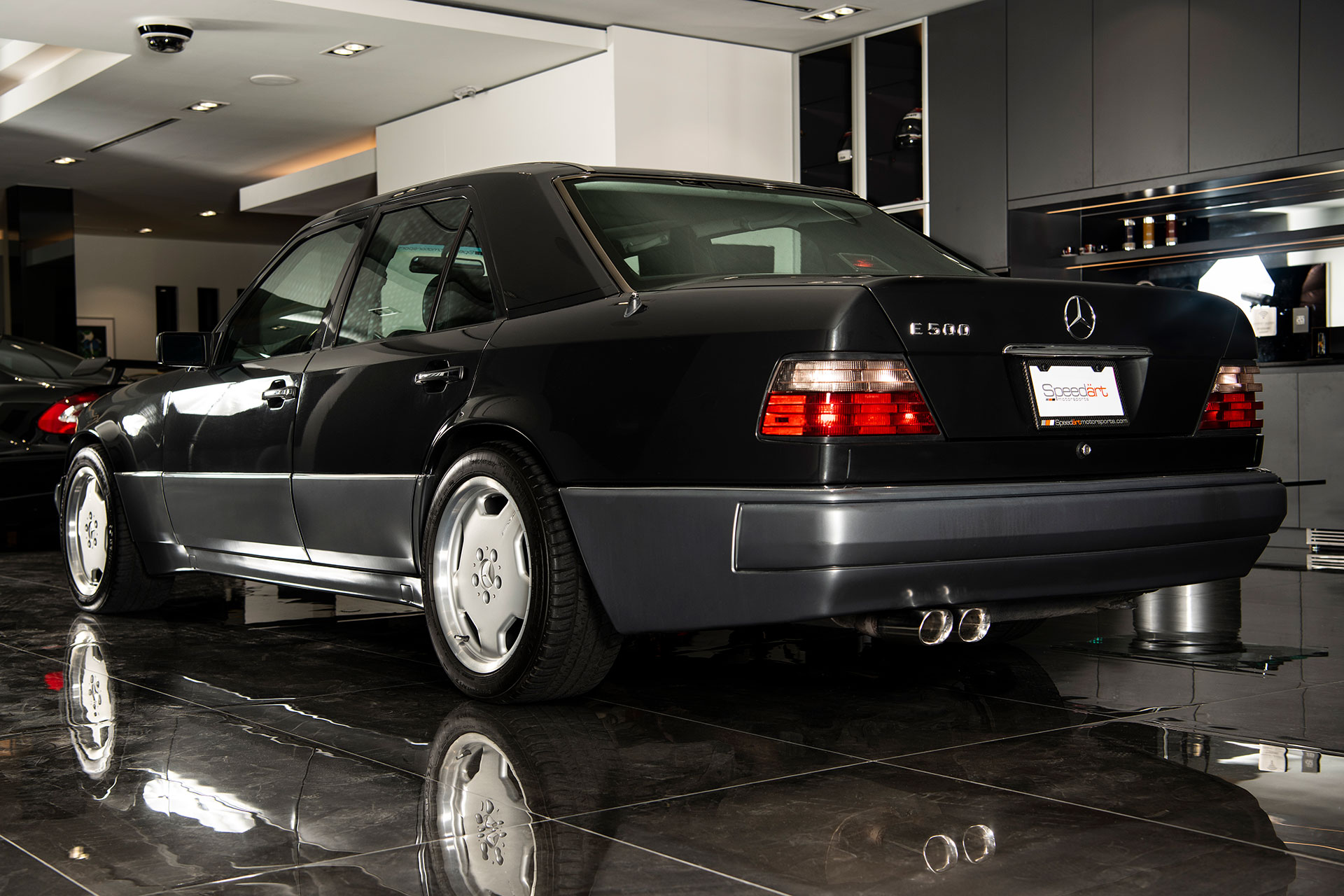 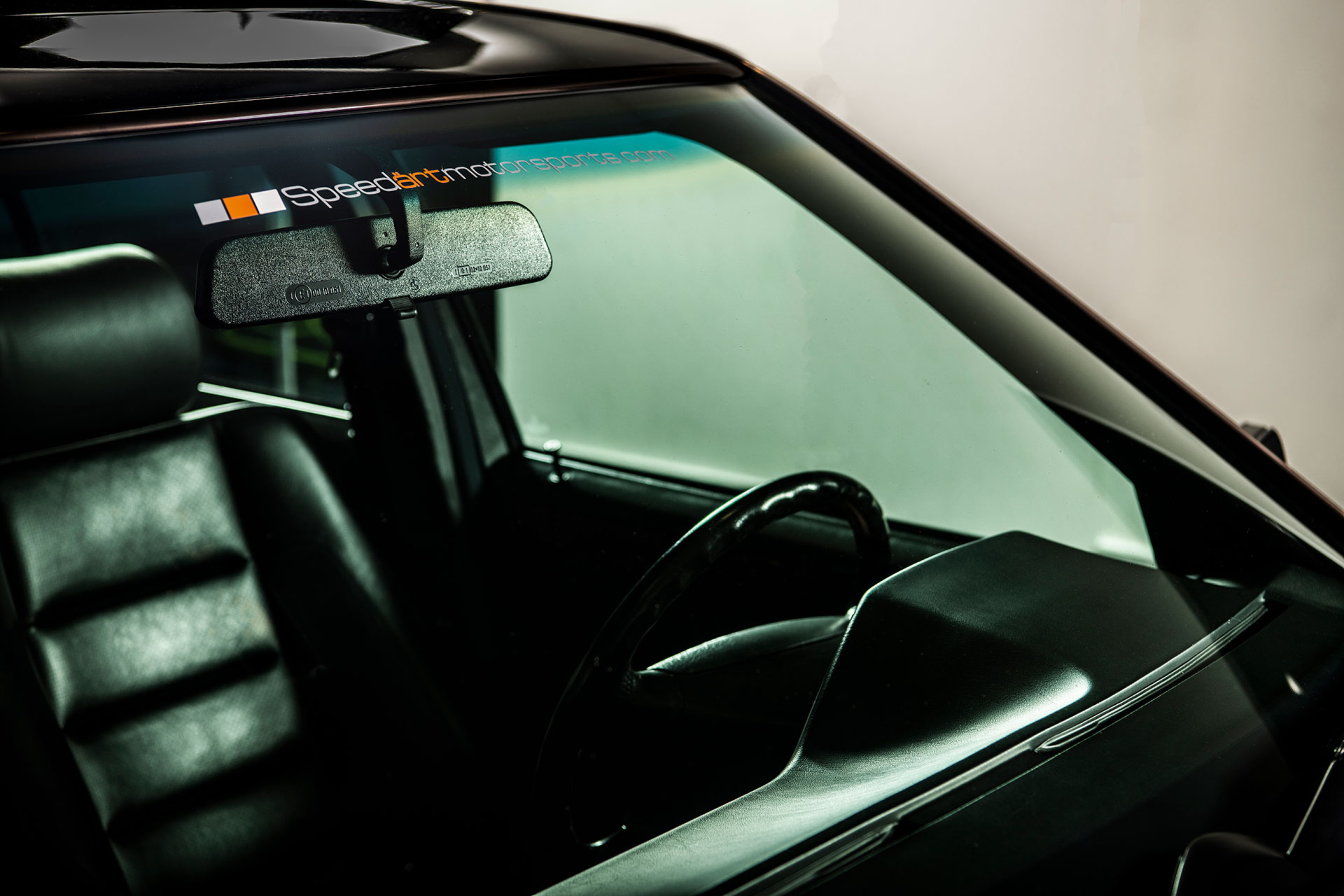 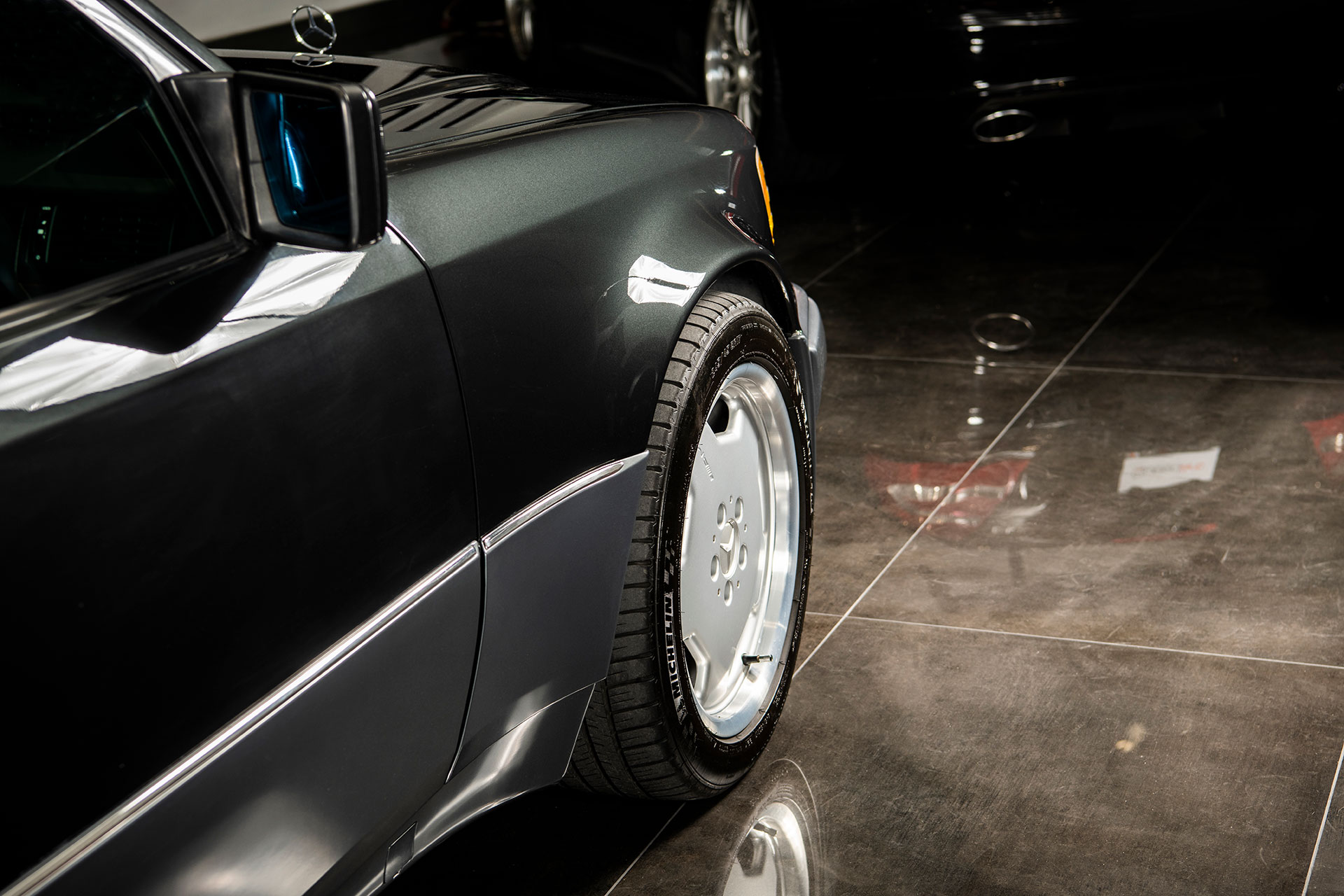 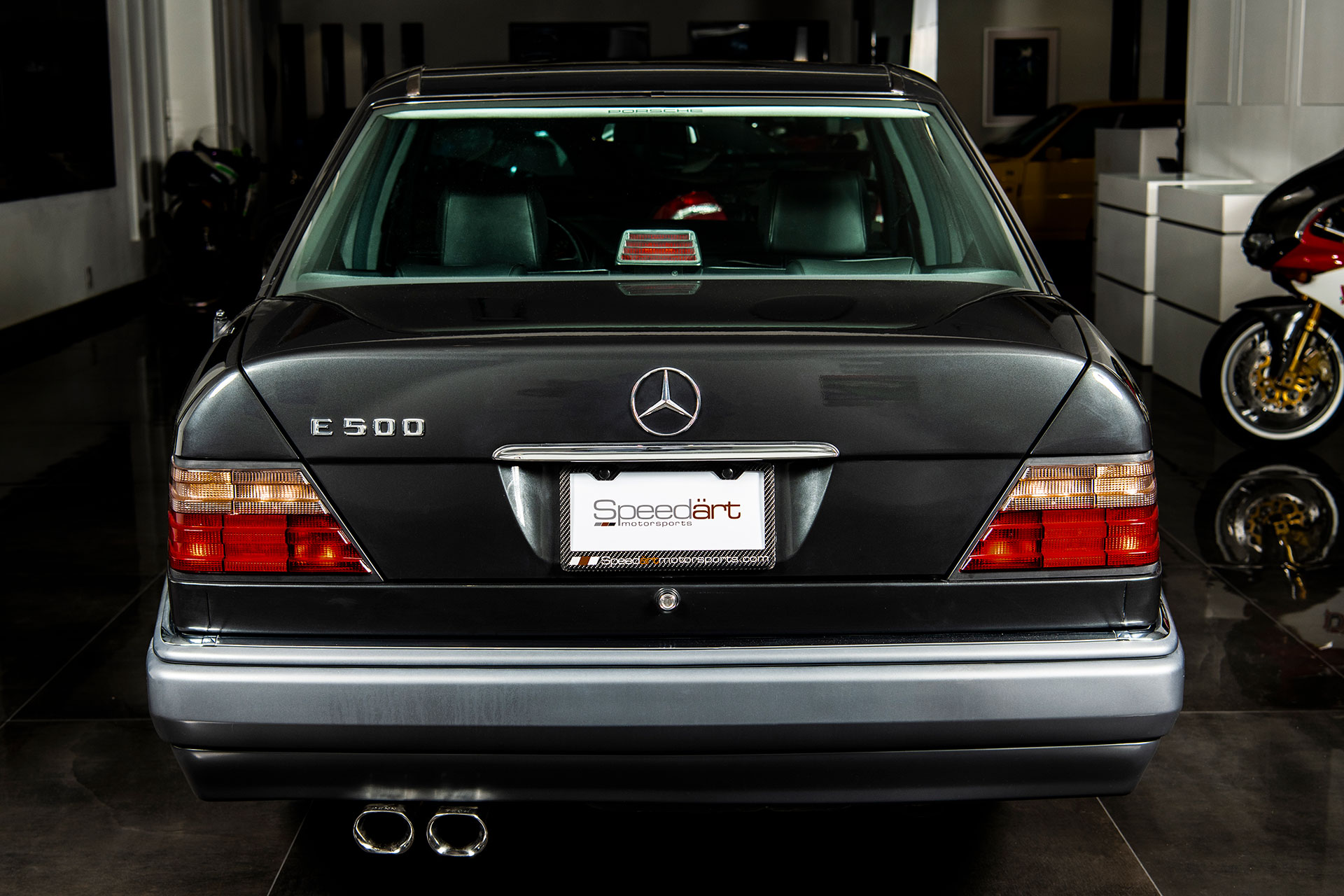 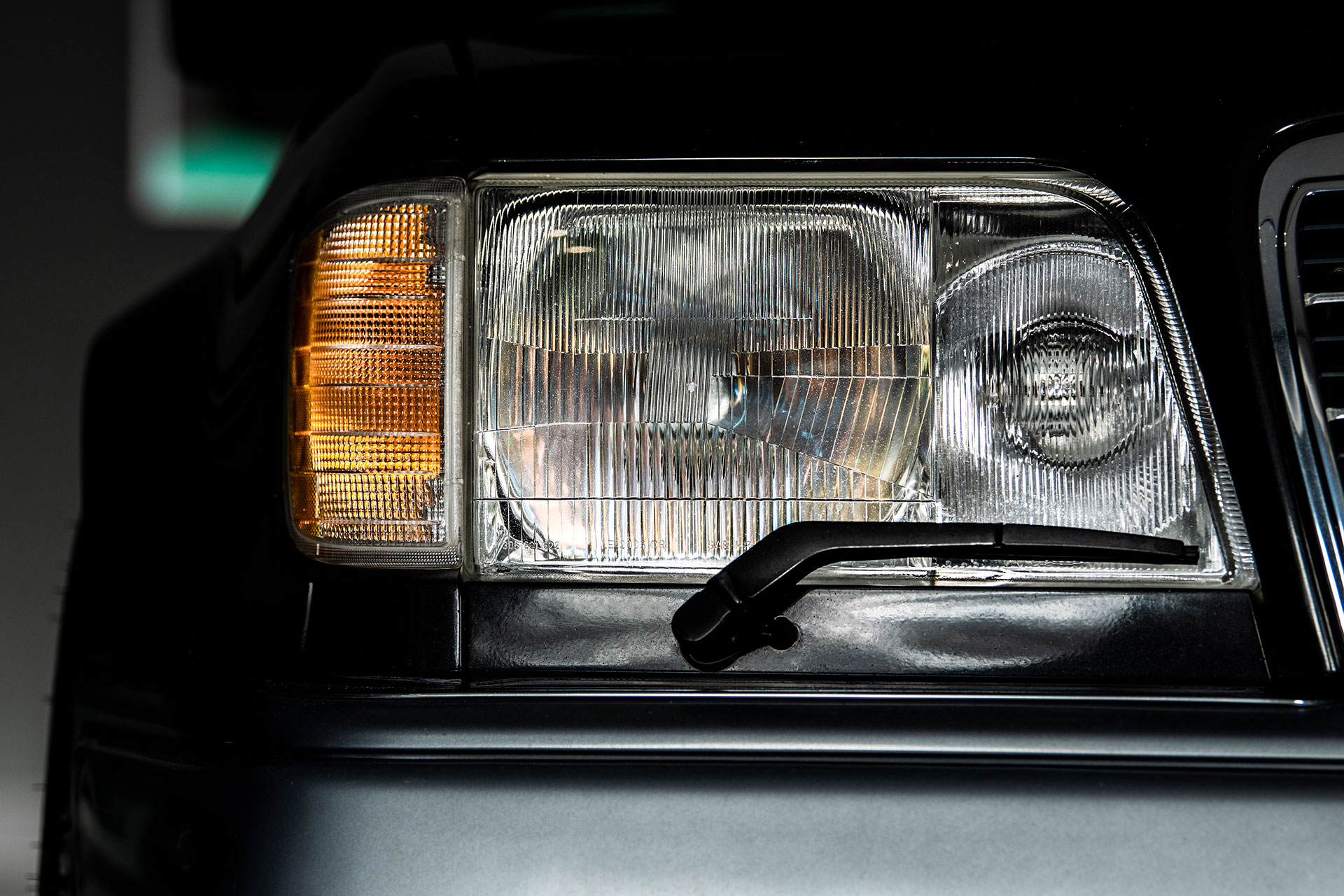 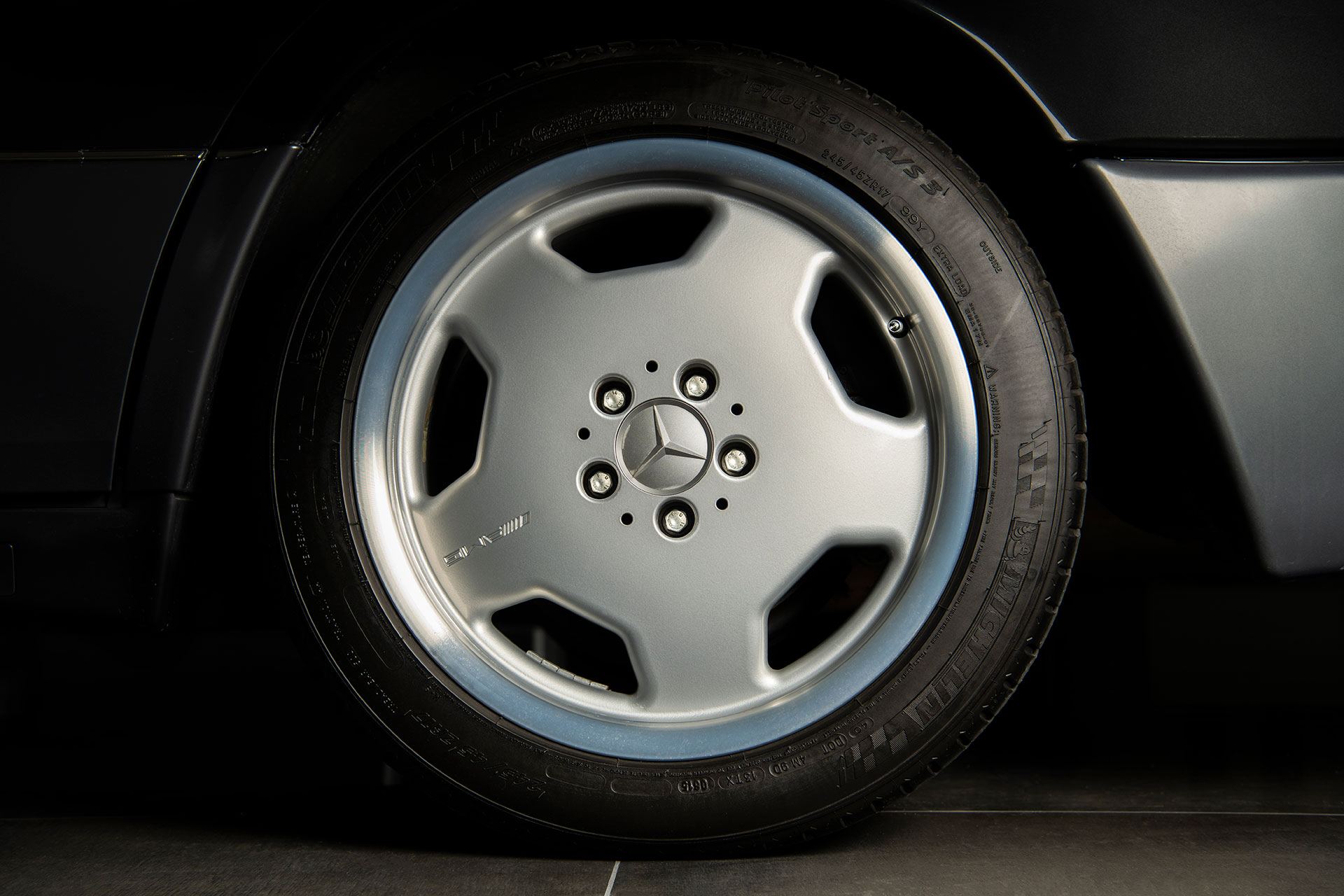 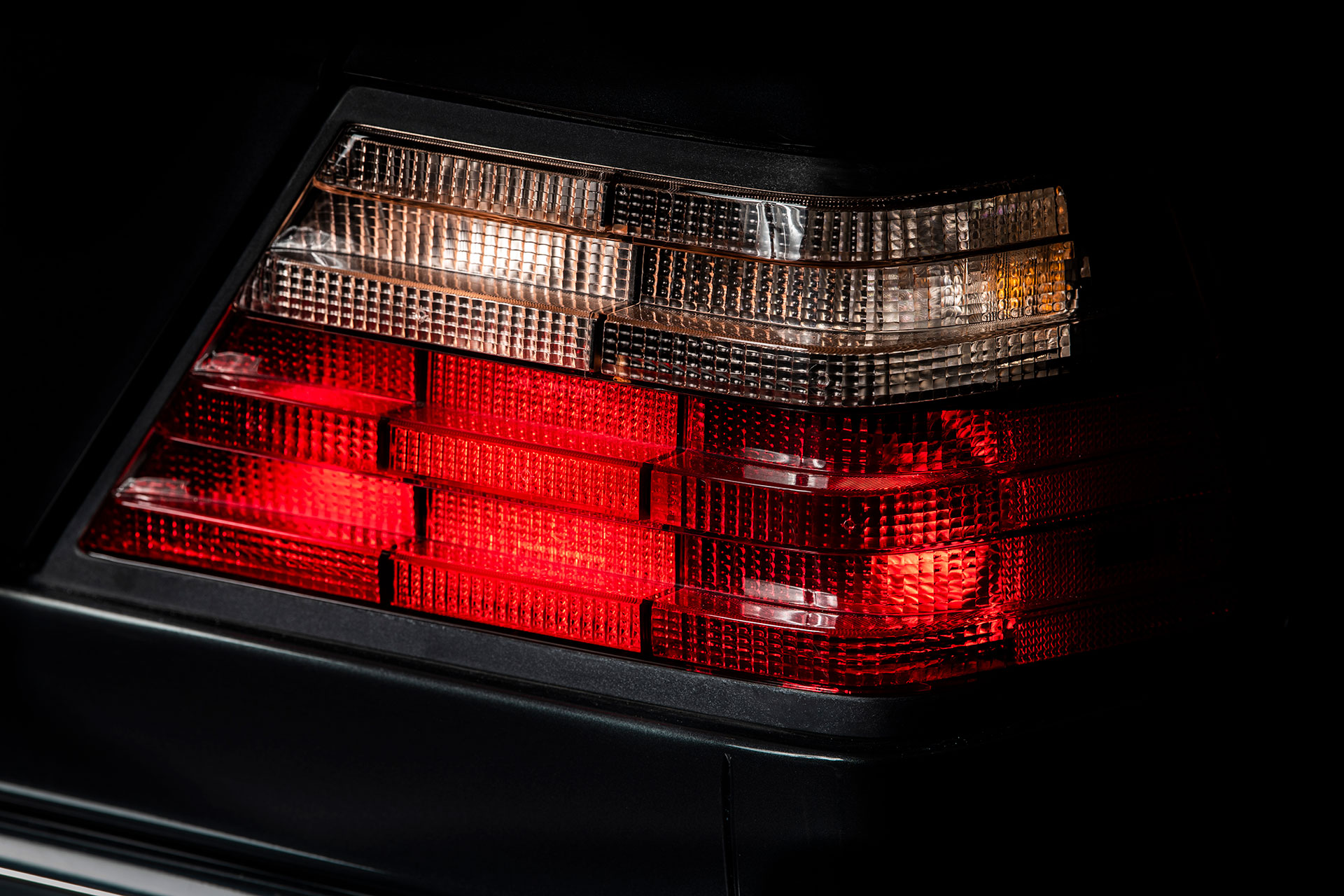 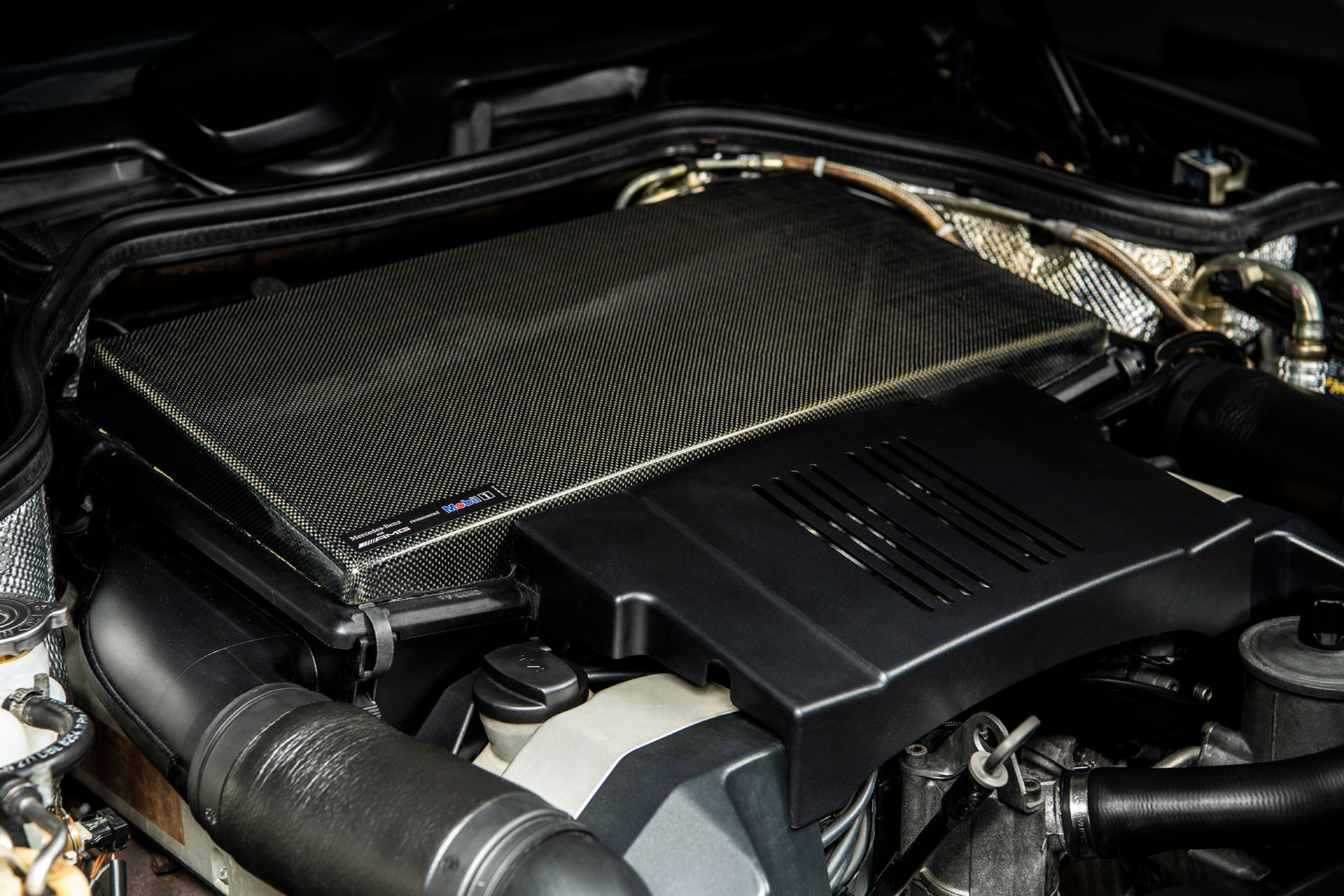 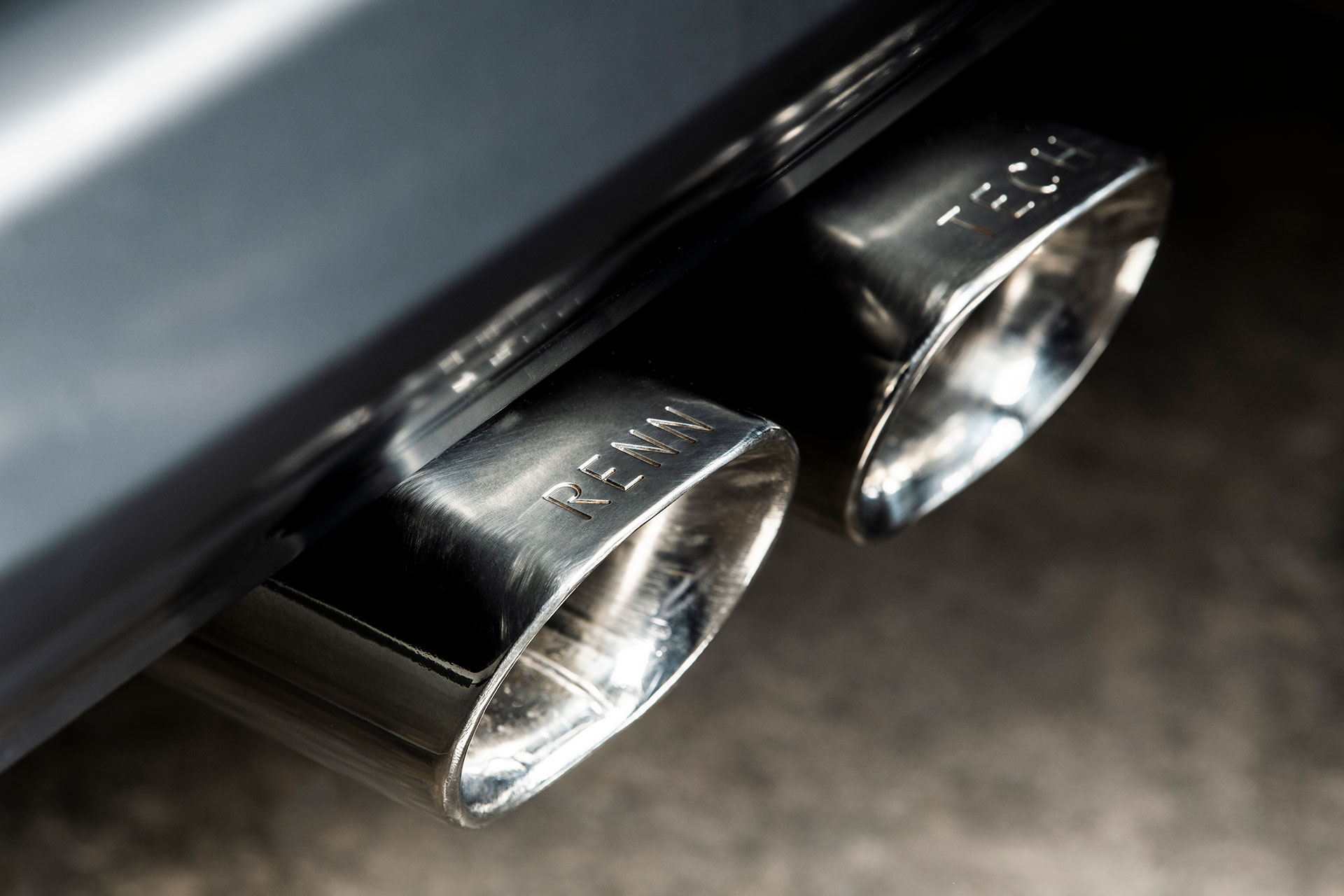 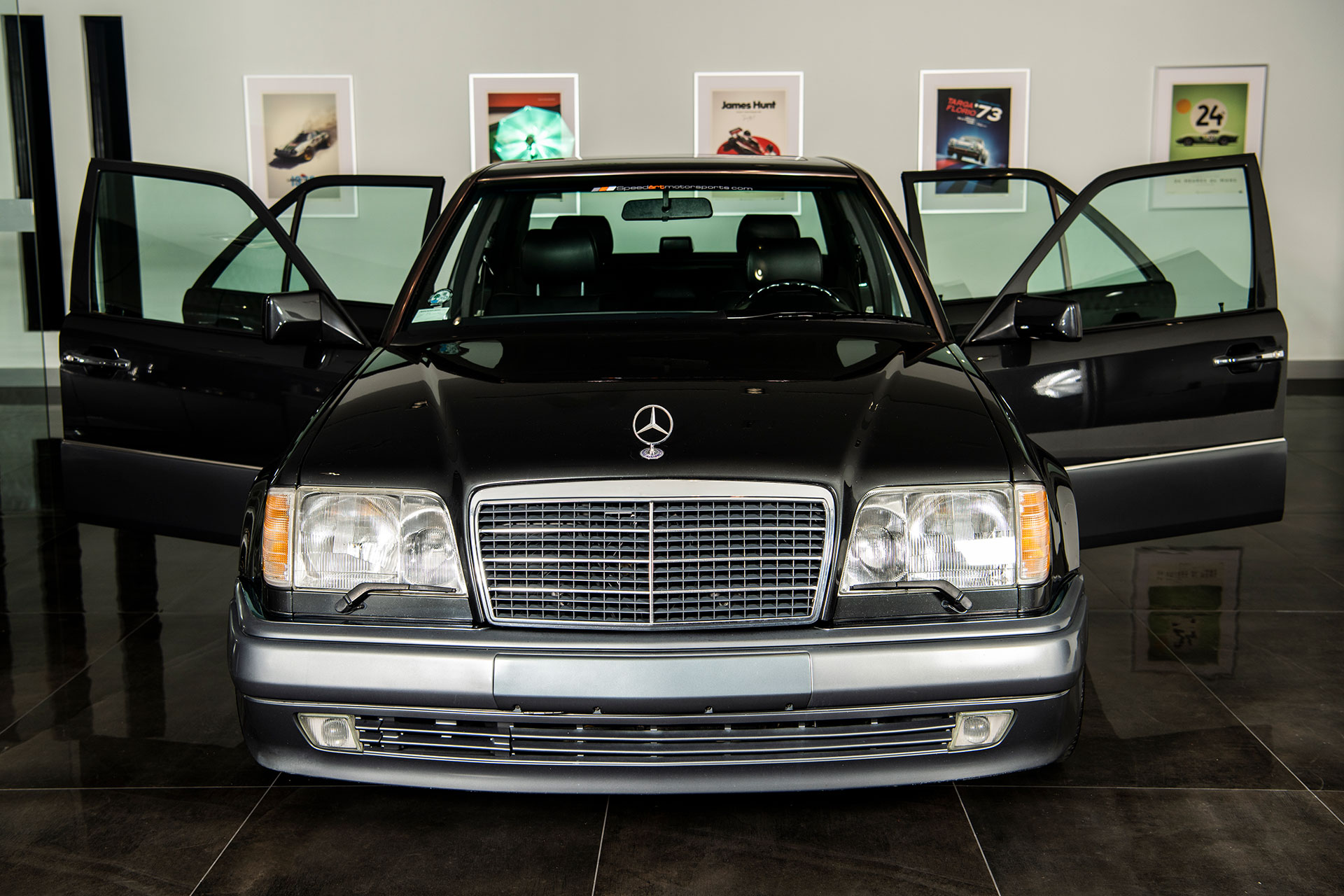 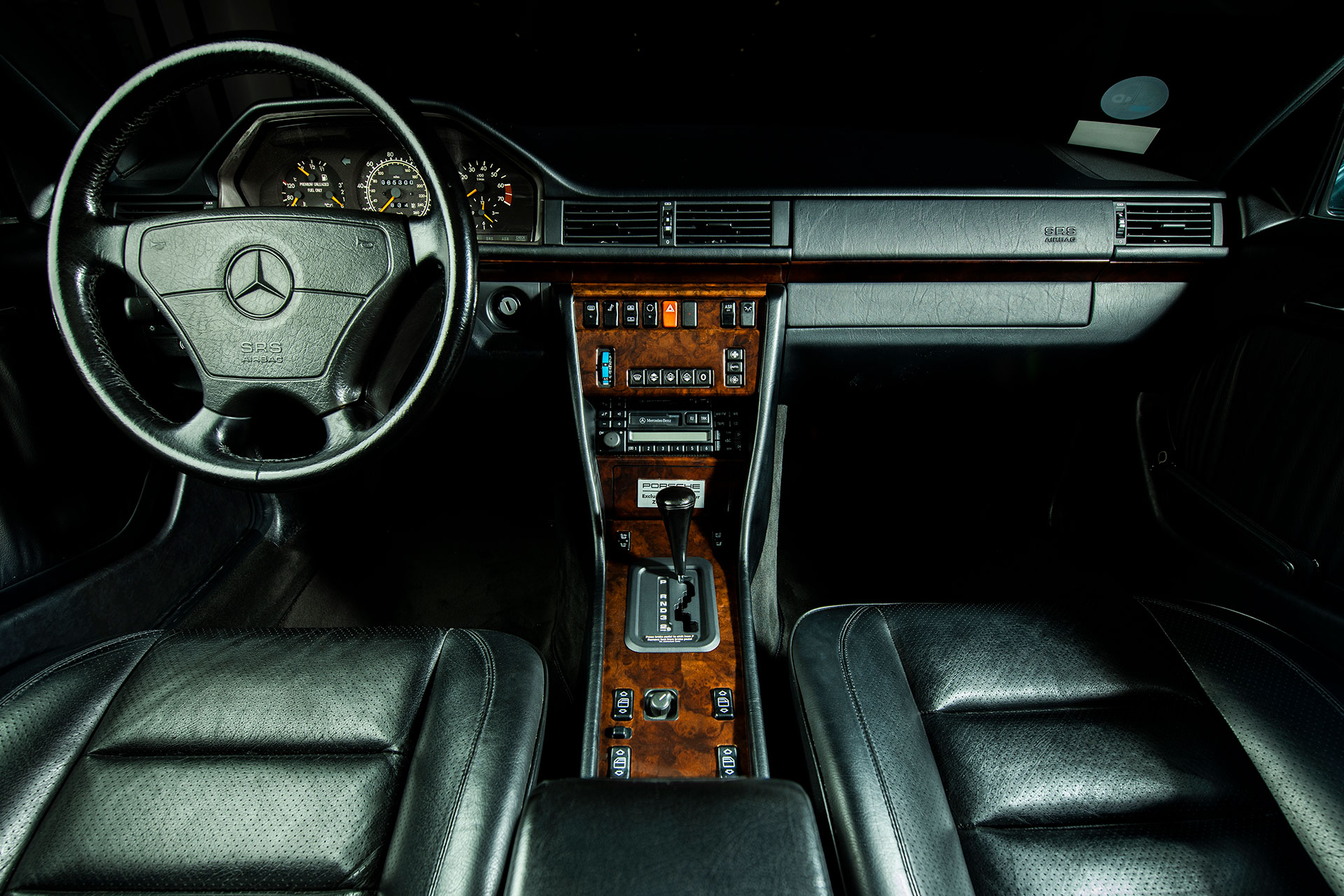 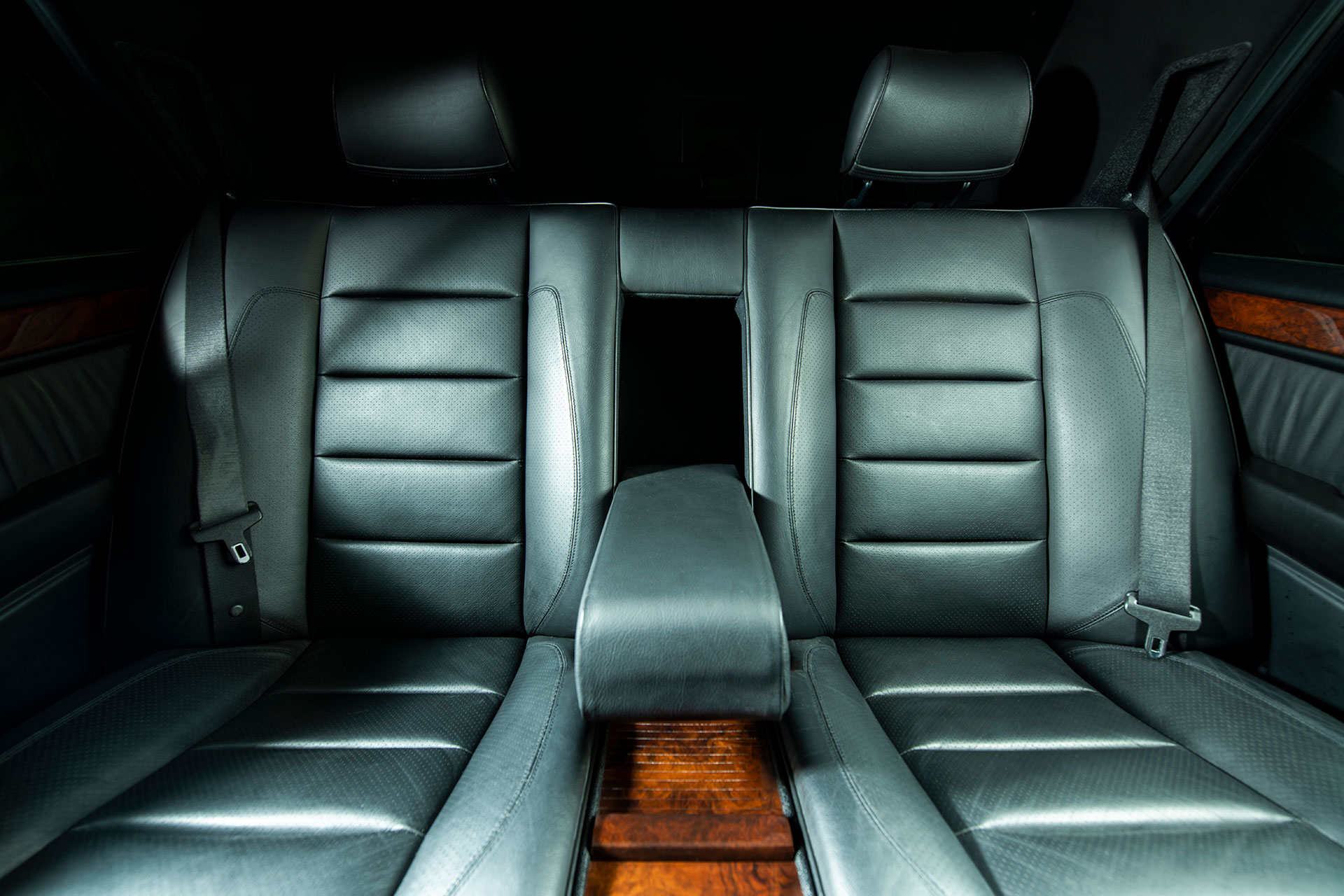 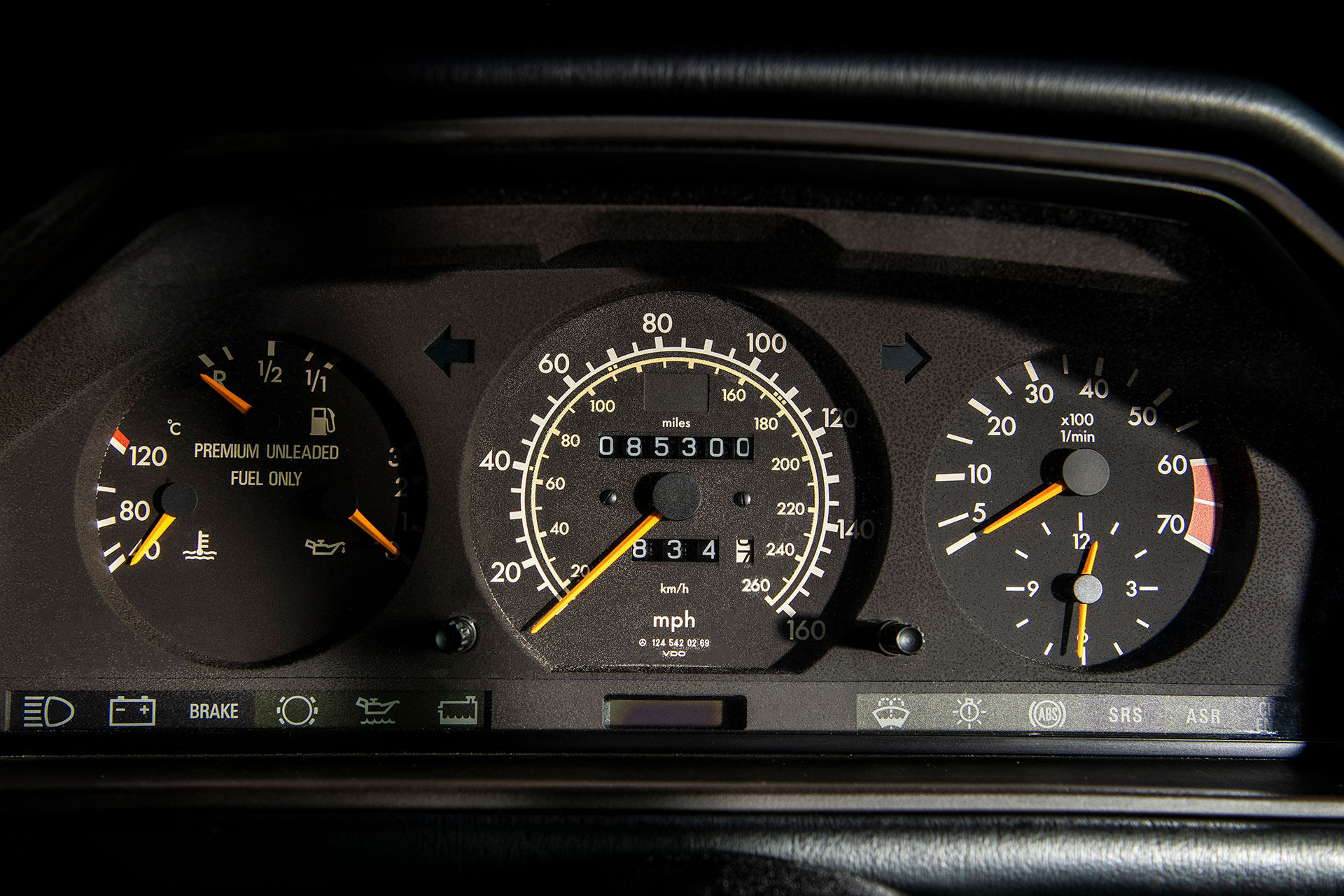 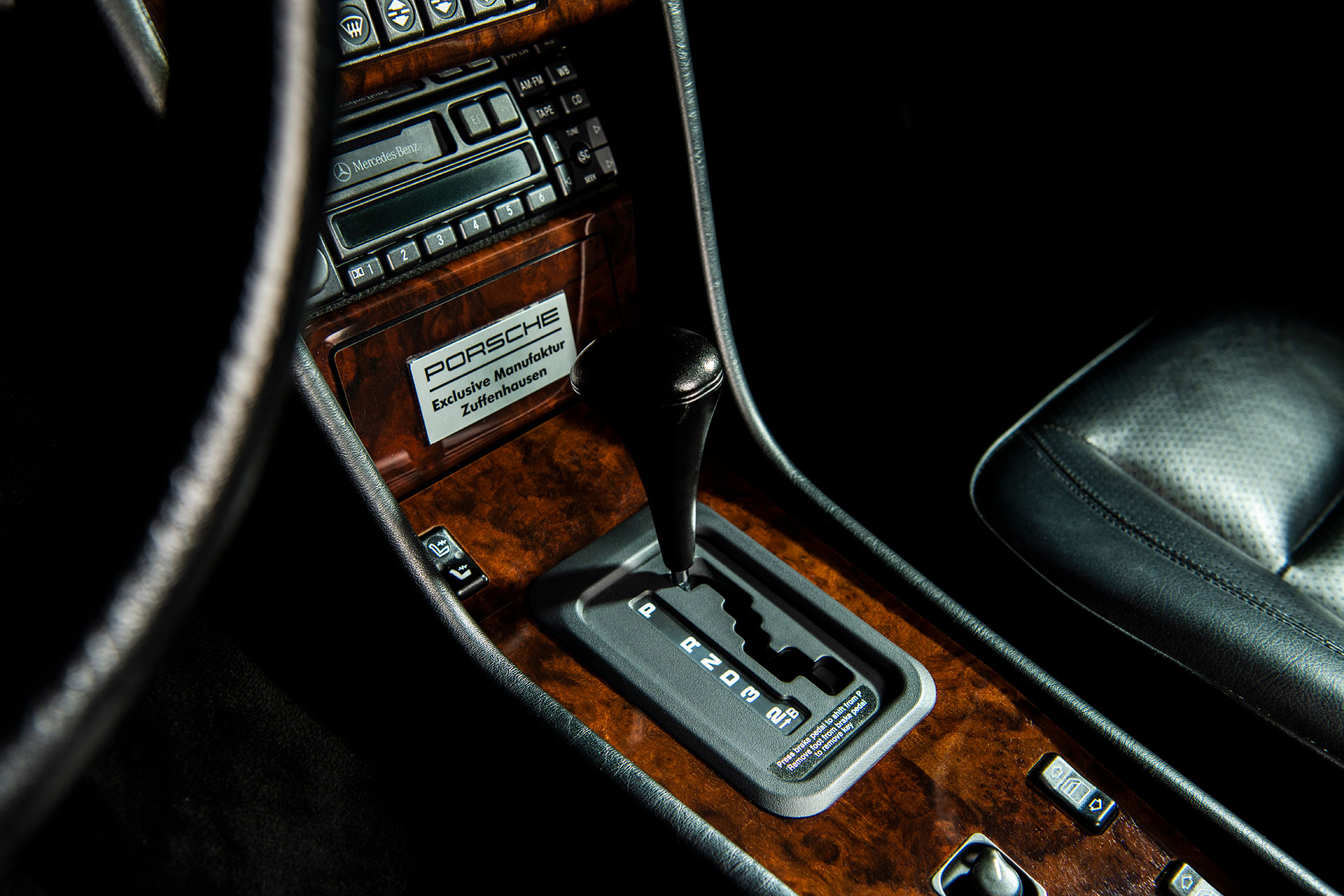 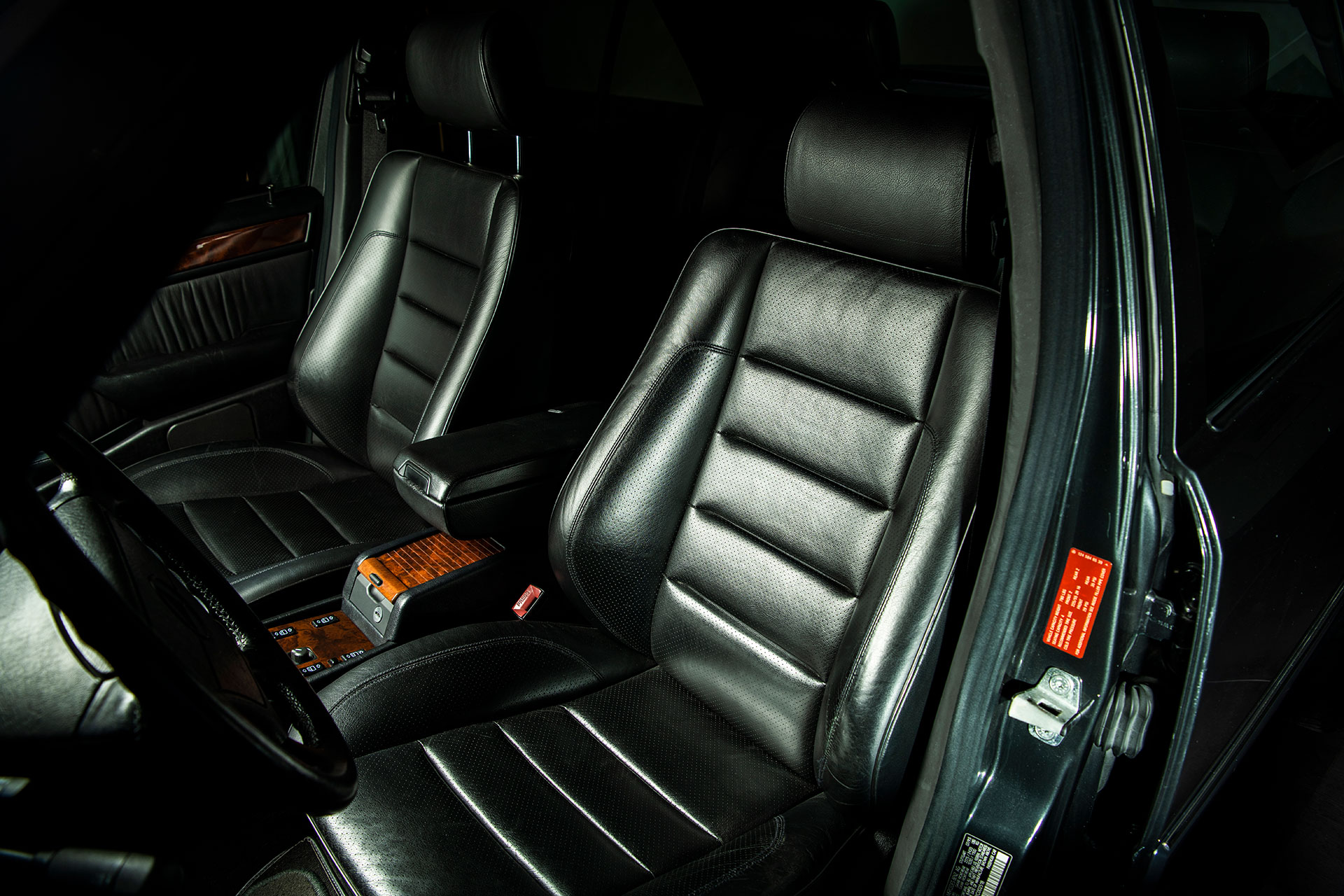 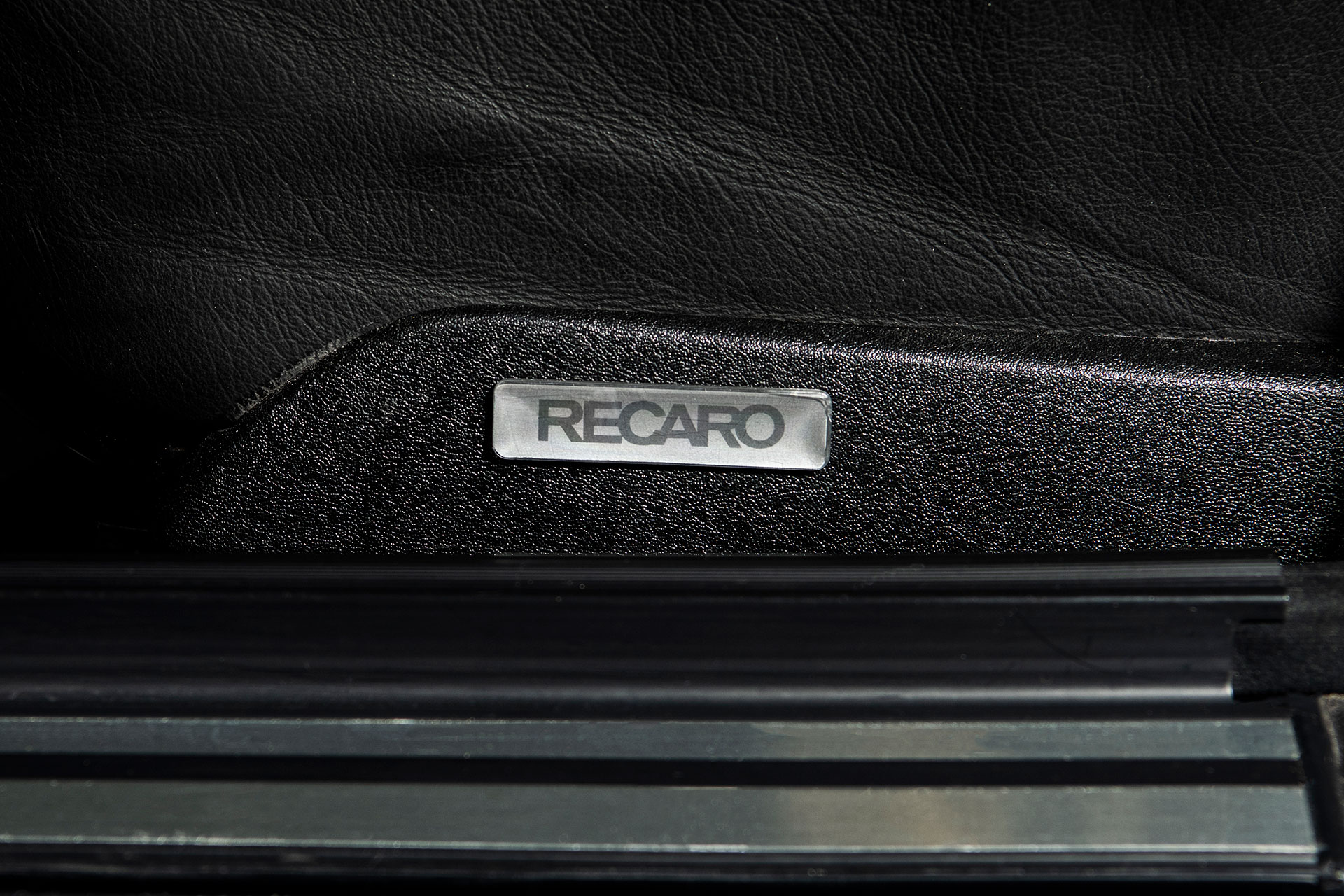 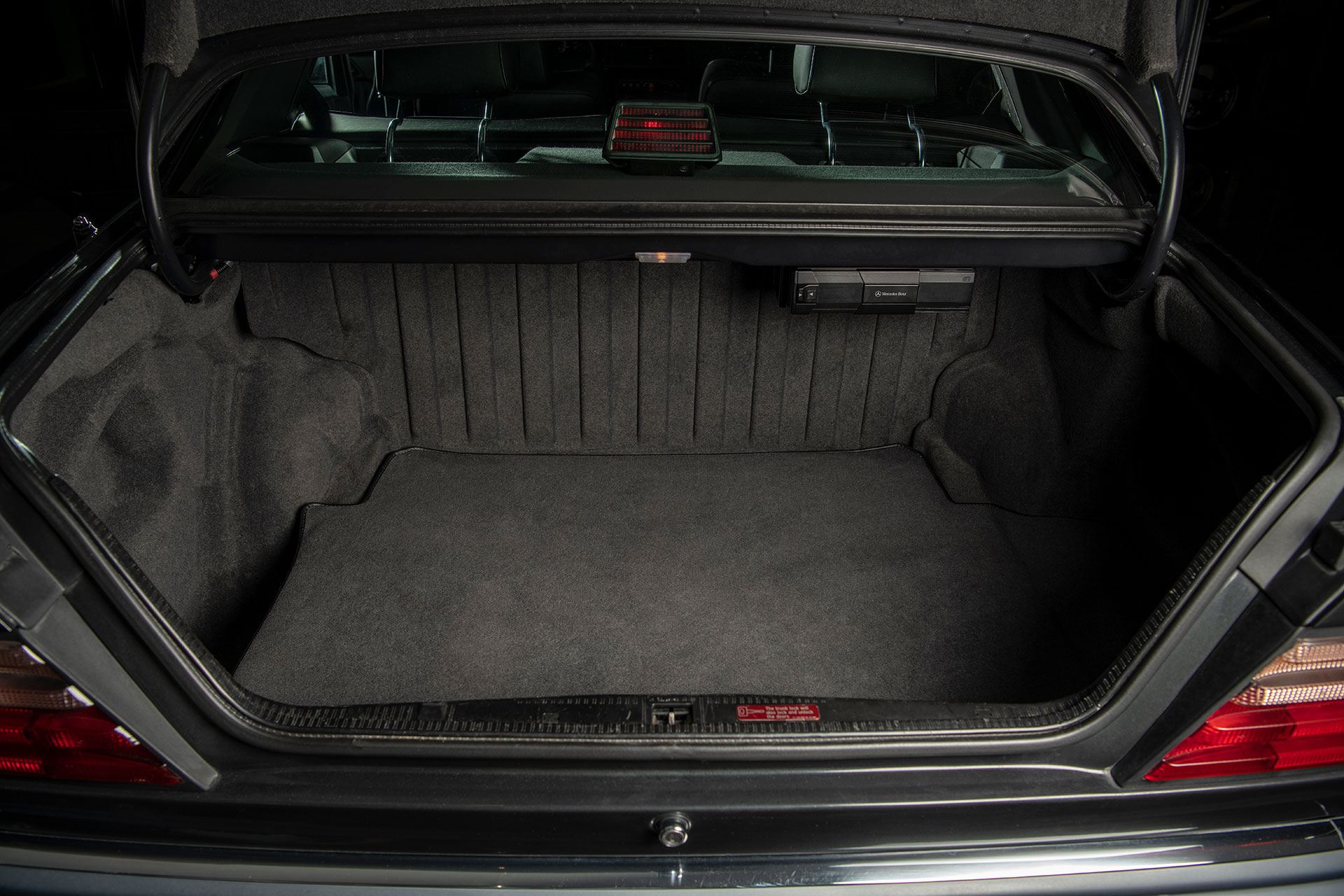 “In the nineties there wasn’t a Formula 1 driver worth his Nomex overalls who would consider anything but a 500E to get from one European Grand Prix to another and that today, the fortunate few who race historical F1 cars have also taken a fancy to this iconic Merc.”

From 1991 to 1994, Mercedes-Benz sold a high-performance version of the W124, the Mercedes-Benz 500 E (W124.036). The 500 E was created in close cooperation with Porsche. With its engineering department being fully occupied with the development of the new S-Class, Mercedes-Benz commissioned Porsche in 1989 to redesign the W124 chassis to shoehorn the 5.0L V8 used in the SL into it, along with the necessary changes on the suspension system and drive train. When the car was ready, it was found that its widened fenders didn’t ﬁt through the W124 assembly line in Sindelﬁngen in three places. Hence Porsche was also commissioned to assemble the car. As a side-effect this arrangement provided workload for Porsche’s plant, as the company was in crisis at the time, and its factory capacity was underutilized.

During production Mercedes-Benz delivered parts to Porsche’s “Reutter-Bau” ex 959 plant in Zuffenhausen where the 500 E chassis were hand-assembled. When ﬁnished the chassis were transported by truck to the Mercedes-Benz assembly plant in Sindelﬁngen to be painted. As soon as the paint was dry the varnished chassis were then shipped back to Porsche’s “Rössle-Bau” in Zuffenhausen where the engine was put in and the car completed. For ﬁnal inspection and delivery the vehicles again were transported to Sindelﬁngen. This process took a full 18 days per car. Design began in 1989. Called ‘500 E’ through model year 1993, for ﬁnal model year 1994 it was face-lifted along with the rest of the range and renamed to ‘E 500’.

The 500 E has a naturally aspirated 5.0L V8 engine derived from the 500 SL (R129) roadster. Sports car braking performance also came from SL components: front SL 500 300 mm disks with 4-piston calipers came installed on the 1992 and early 1993 cars. The later 1993, and all 1994 cars came with the upgraded 320 mm set taken from the 600 SL. Rear brakes on all years were 278 mm brakes from the 500 SL. In the USA, the 500 E came fully equipped, with the only options available to the buyer being a dealer-installed CD changer and an integrated cellular telephone. The 500 E was only with four seats in left hand drive, with the four leather seats supplied by Recaro (the fronts heated). Called the “Wolf in Sheep’s Clothing” by the press, performance tests of the day yielded impressive results: 0–100 km/h (0–62 mph) times of 5.5 seconds and acceleration through the quarter-mile (0.4 km) in 14.1 seconds at 163 km/h (101 mph). The top speed was redline limited at 6,000 rpm to 260 km/h (~160 mph). With its aggressive stance: 1.5 inches wider track, 0.9 inch lower proﬁle, ﬂared fenders, side skirts, front air-dam and wide tires, the 500 E is easily distinguished from its lesser brethren. Because of its look, limited numbers, hand-built construction, and unique pedigree, the 500 E is already considered a “classic”, even within Mercedes-Benz.

This example is the face lifted iteration of the last and ﬁnal year and one of the 1,528 units imported in United States in its most appealing conﬁguration of Black Pearl and all Black Recaro leather sport seats. The car retains its original paint with absolutely no respray or body repairs, further substantiated by its CarFax report.

The E500 was originally delivered to Park Place Motorcars of Dallas and was sold for the ﬁrst time to Mr. Jon W. Kilgore of the Chicago Bears on July 1995. Upon delivery Mr. Kilgore commissioned Hartmut Feyhl of RENNtech to enhance the already outstanding performance of the sport sedan for an added cost to the already hefty MSRP of $82,975.

In de rigueur fashion, the car received all RENNtech upgrades that were available at the time including a visible stainless sport mufﬂer, a carbon ﬁbre air box with high ﬂow ﬁltering, an upgraded Fuel Management E-PROM with unrestricted speed limit and a beautiful set of 17″ AMG staggered mono block wheels. RENNtech was instructed to retain all the original equipment that were replaced and to this day they are available to the purist who desires to return the car to an absolute state of OEM including the original “eight hole” 16 inch alloy rims.

The E500 was subsequently sold to the owner of Speedart Motorspots, James Hondros on April 2012 who has been the sole custodian ever since.

During Mr. Hondros 6 years/10,000 miles ownership there was no expense spared on maintaining this special machine and an ample documentation binder is on hand attesting to such care.

Due to the new owner’s constant passion of properly curating such a signiﬁcant automobile a front set of 334 mm big Brembo brakes “Mercedes Siver Arrow” type and 300 mm ATE rears with cross drilled rotors and stainless lines were ﬁtted including a full set of H&R 20 mm hub centric spacers resulting to a greater stopping power and further enhancing the muscular stance by ﬁlling the gap on the bulging fenders as well as adding to the traction ability. Just like with the previous owner every original part was stowed away.

Speedart Motorsports is proud to present for your consideration this autobahn express in spectacular condition, both cosmetically and mechanically as a complete package that includes keys, books, service manuals, CD changer with 2 cartridges, ownership & maintenance records, OEM car cover and the original window sticker as well as all the aforementioned factory spares.