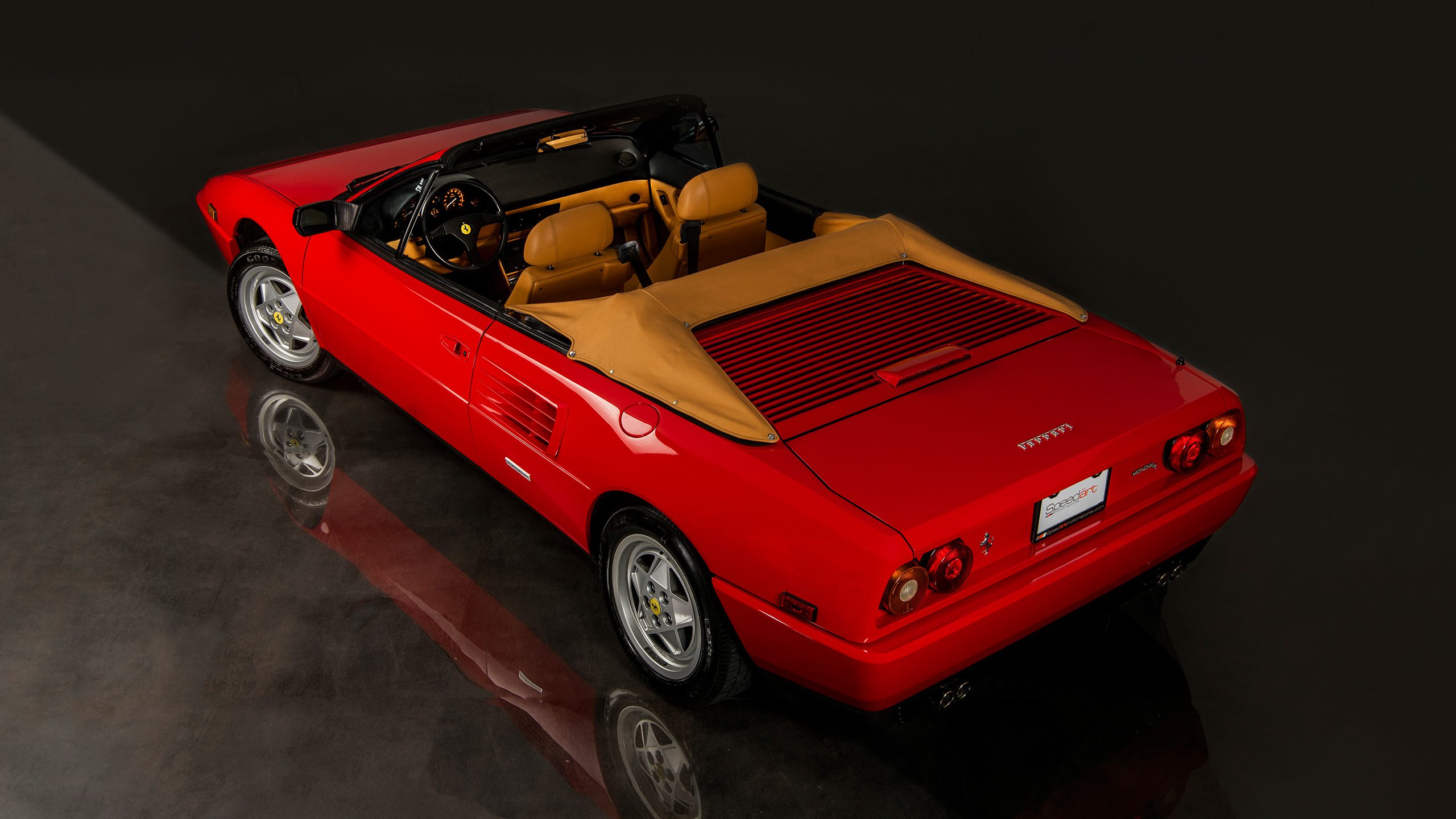 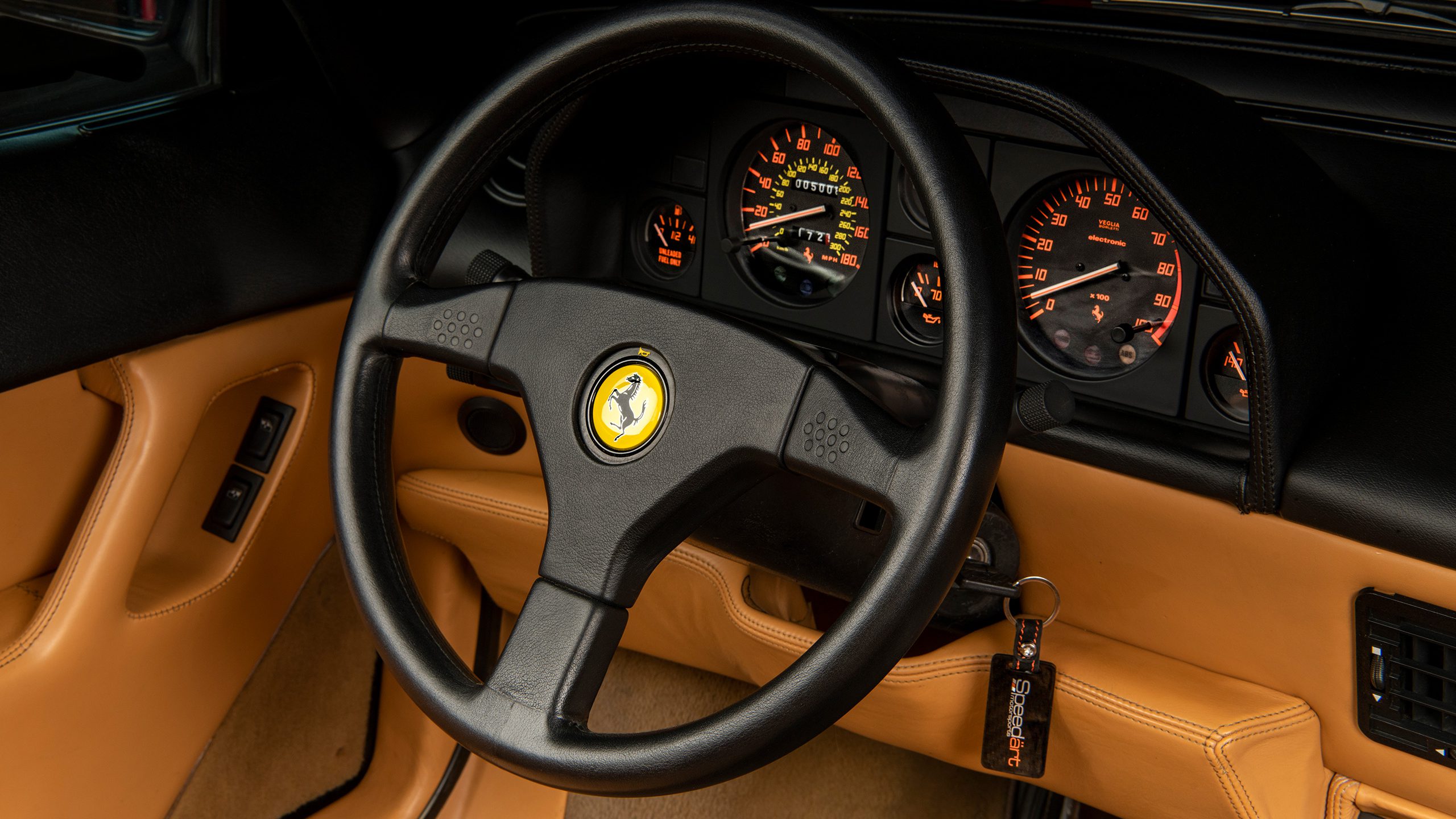 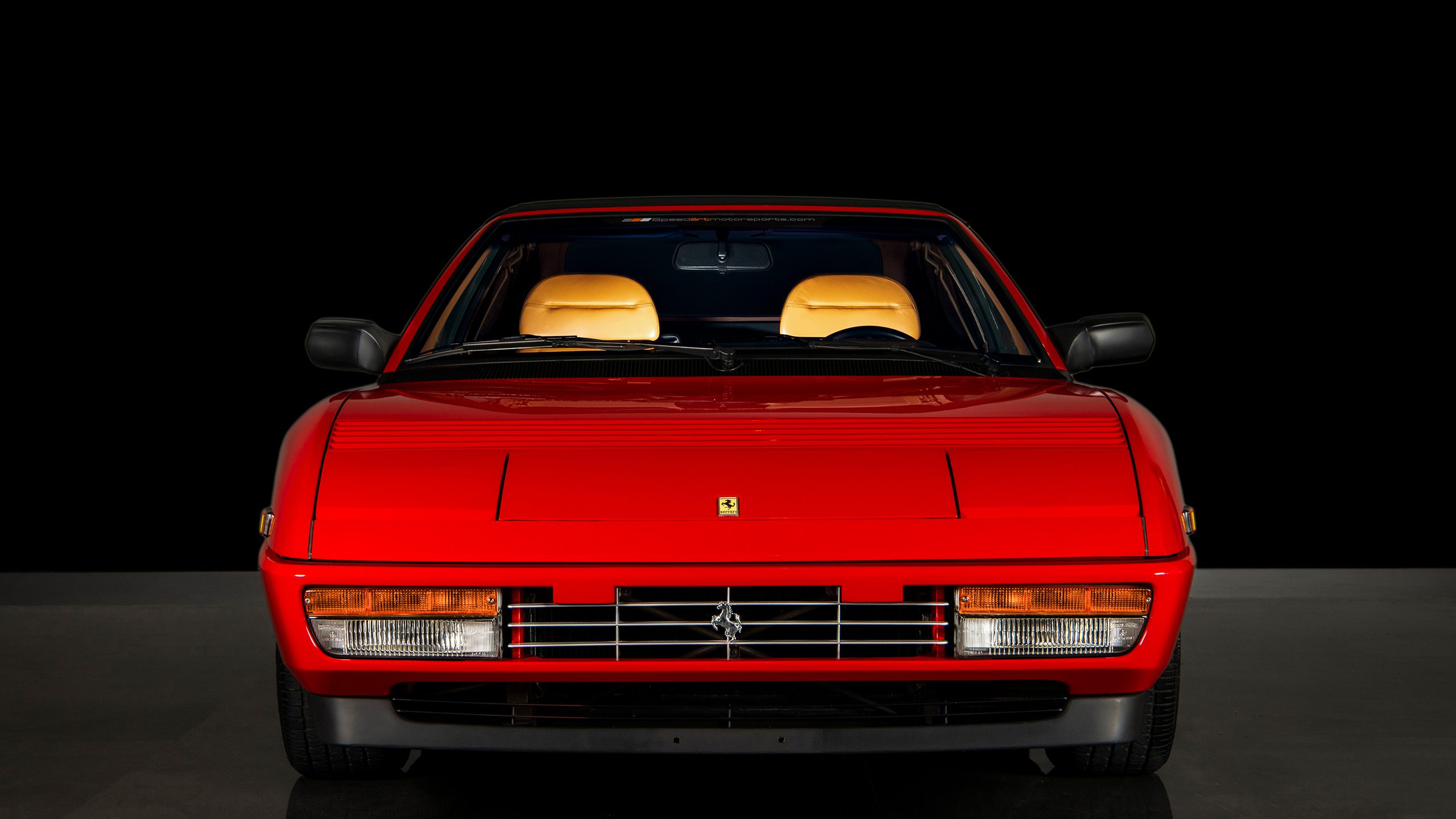 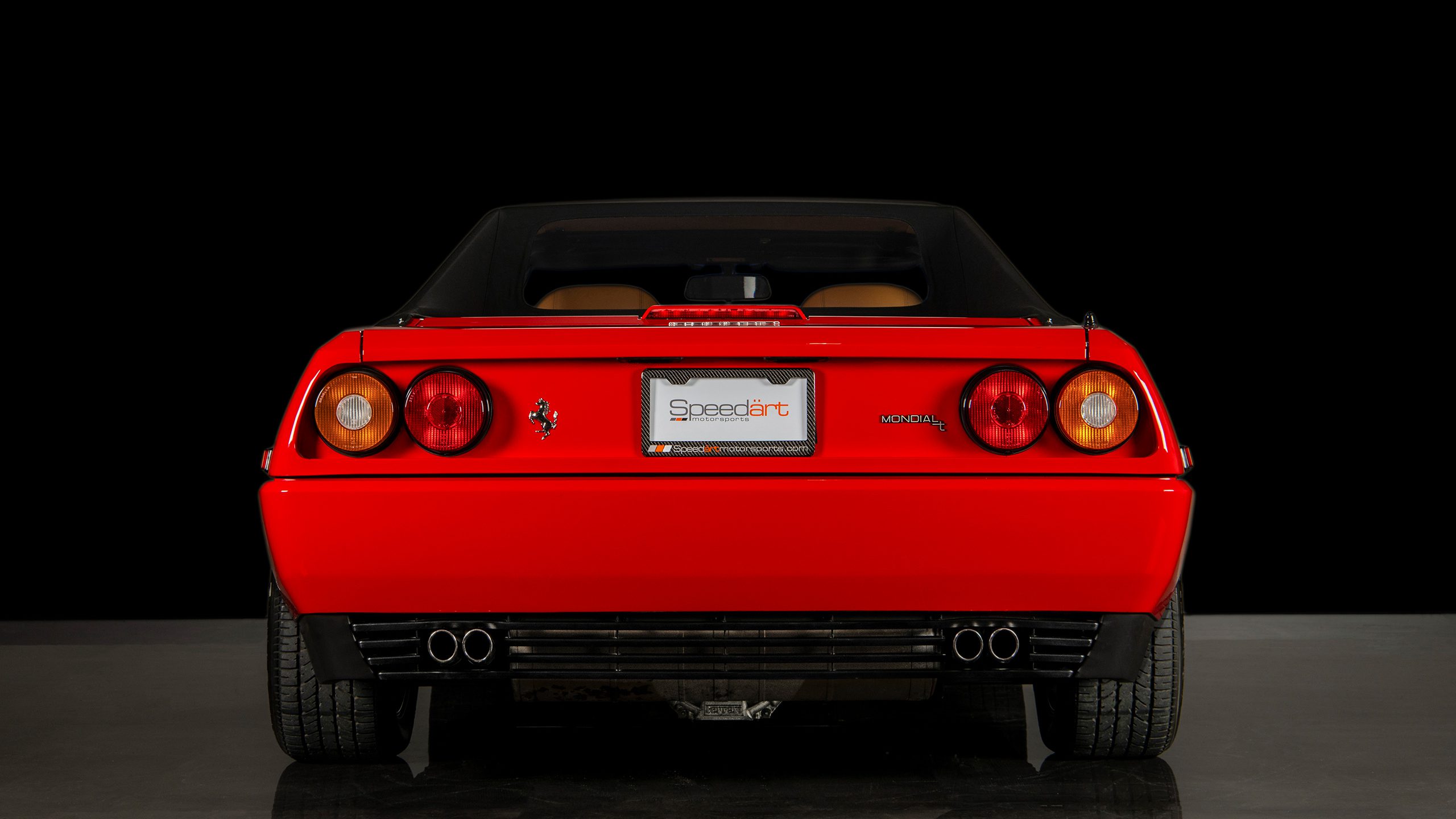 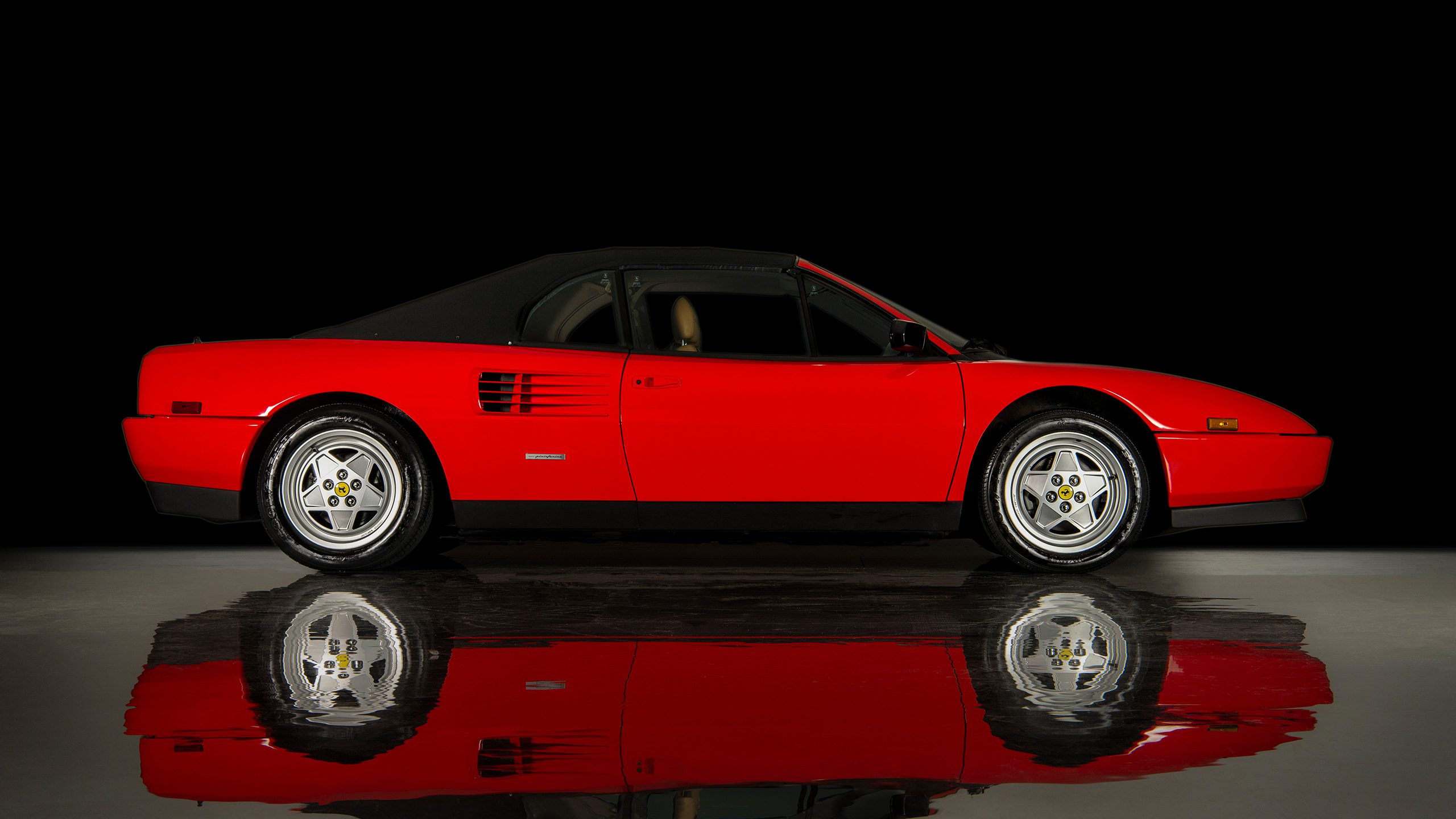 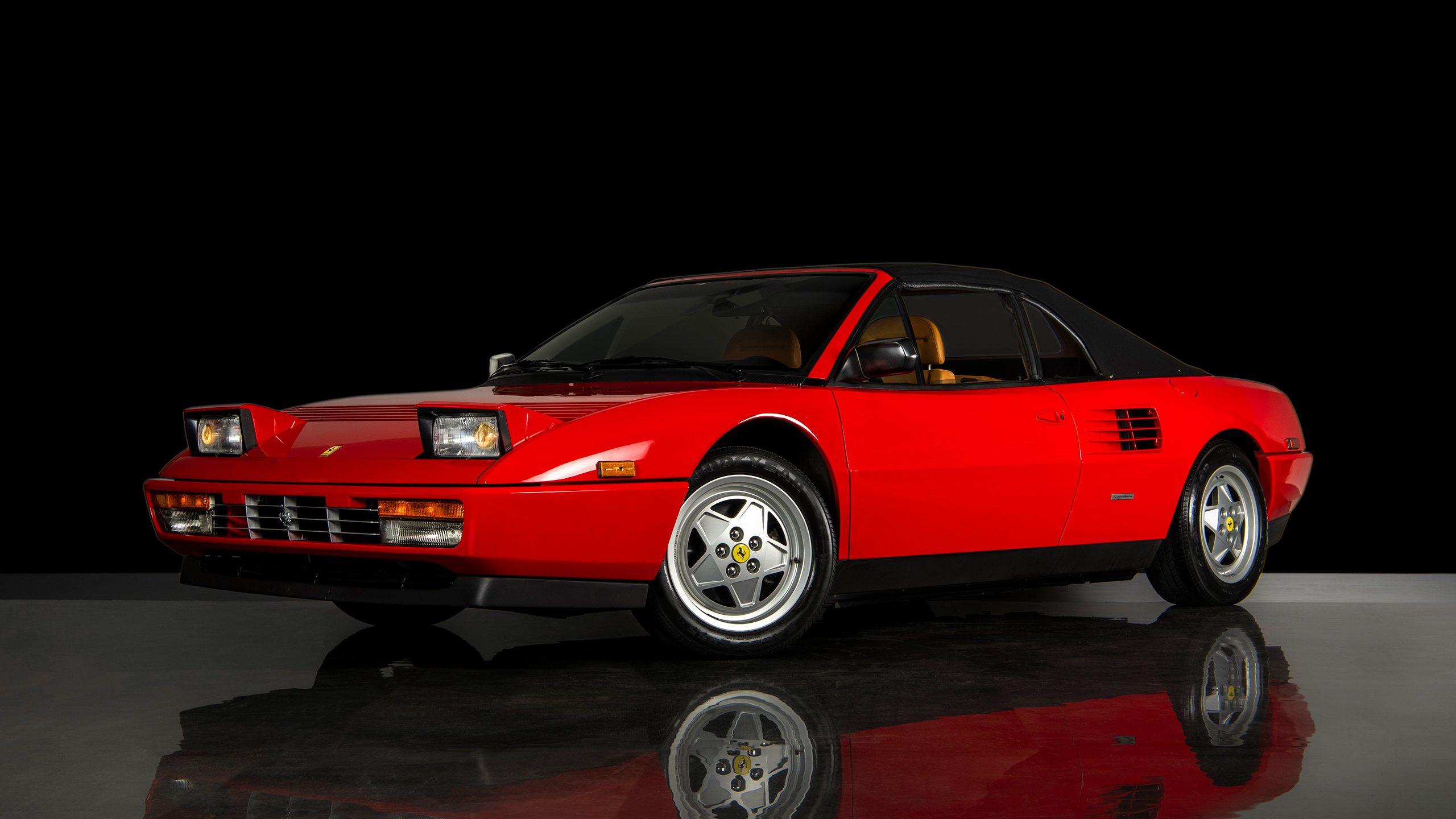 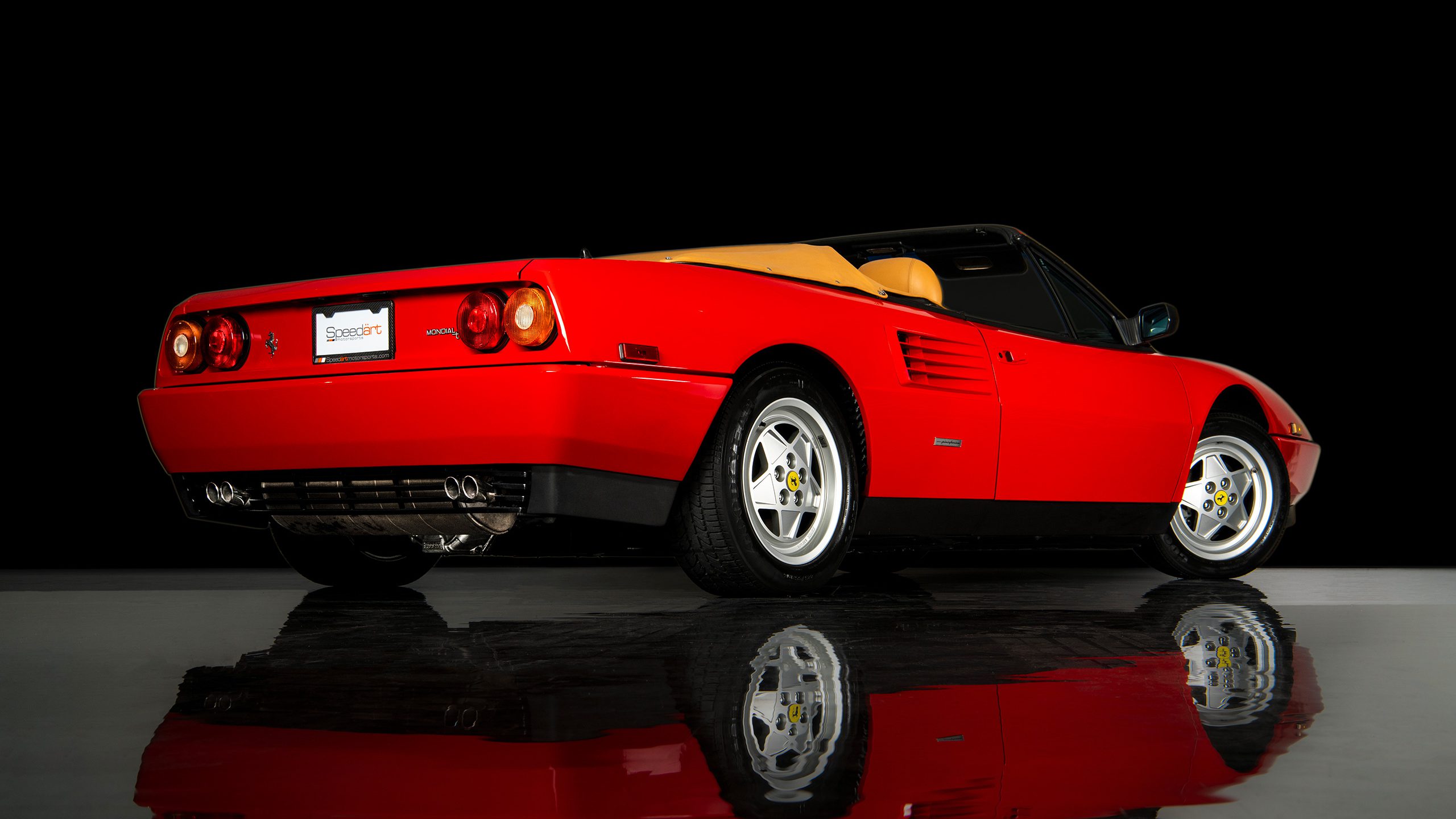 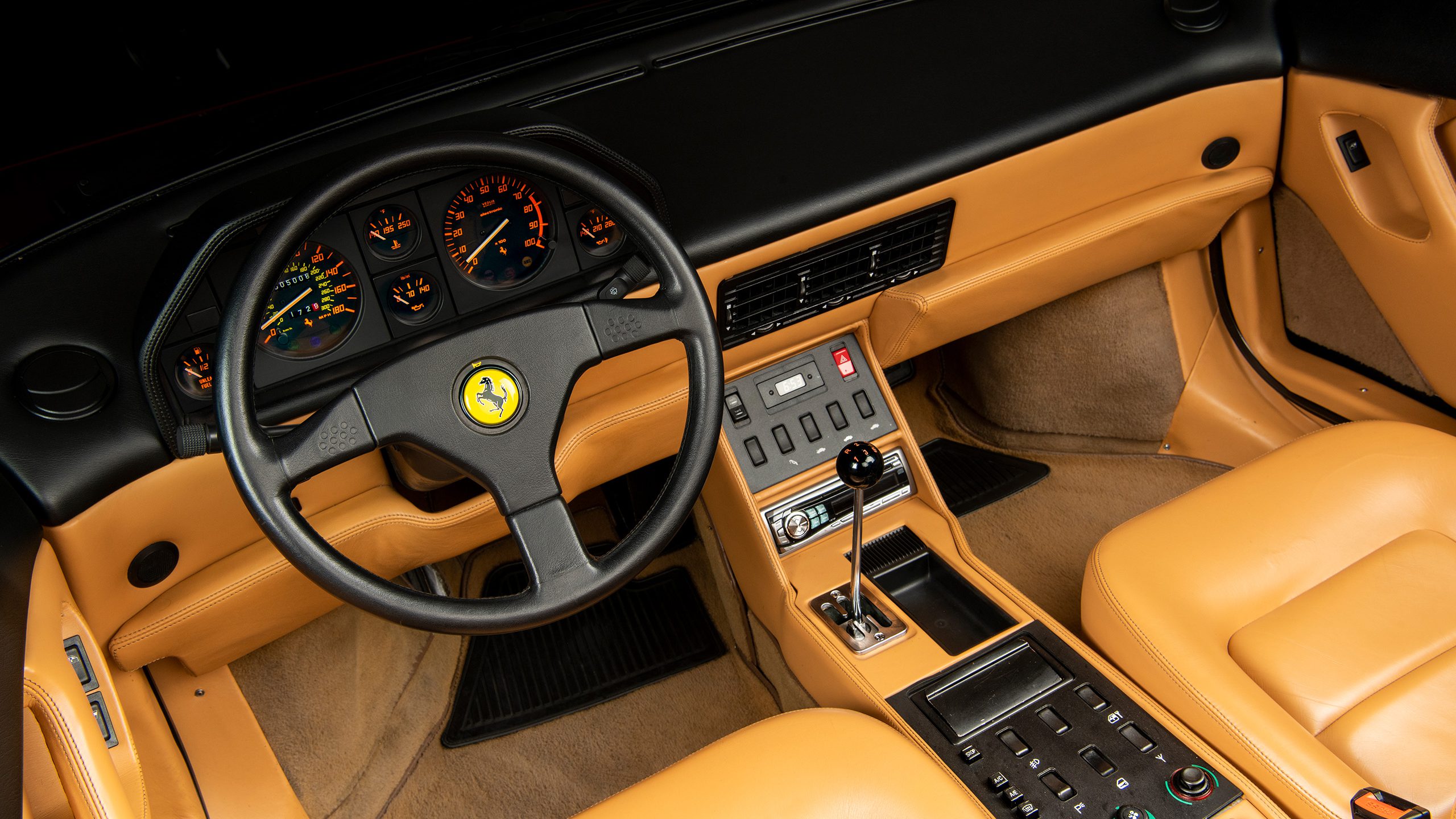 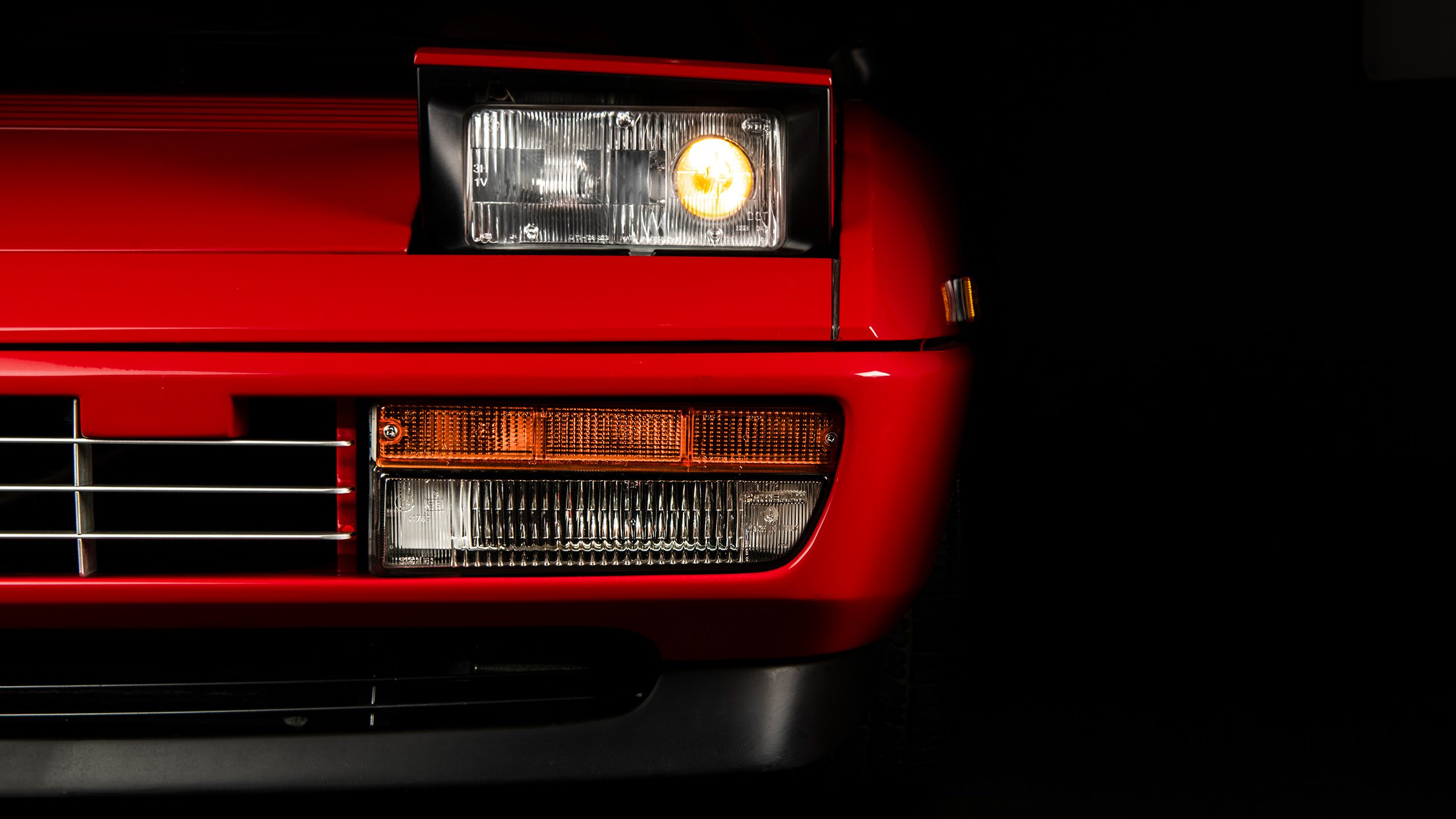 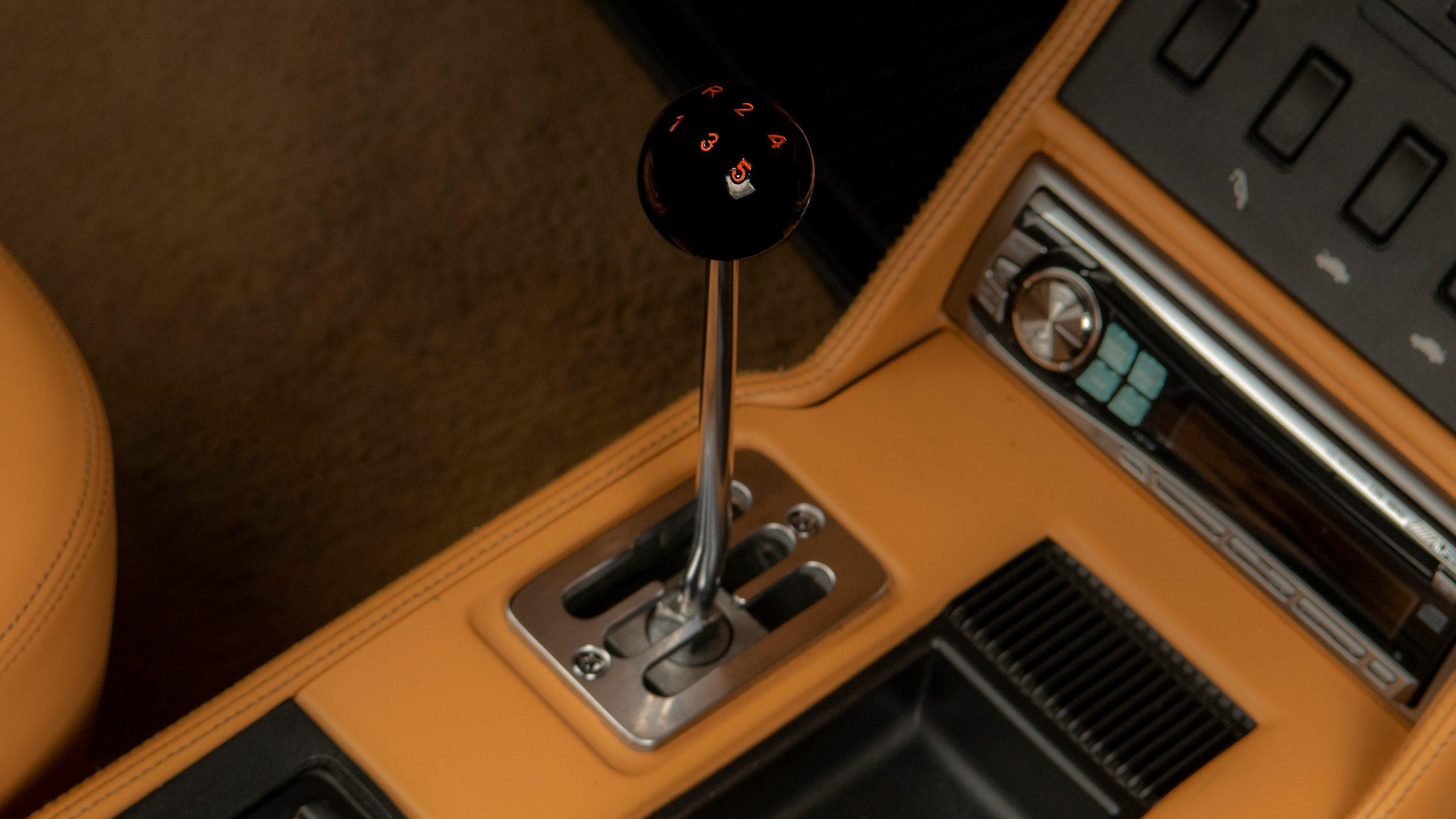 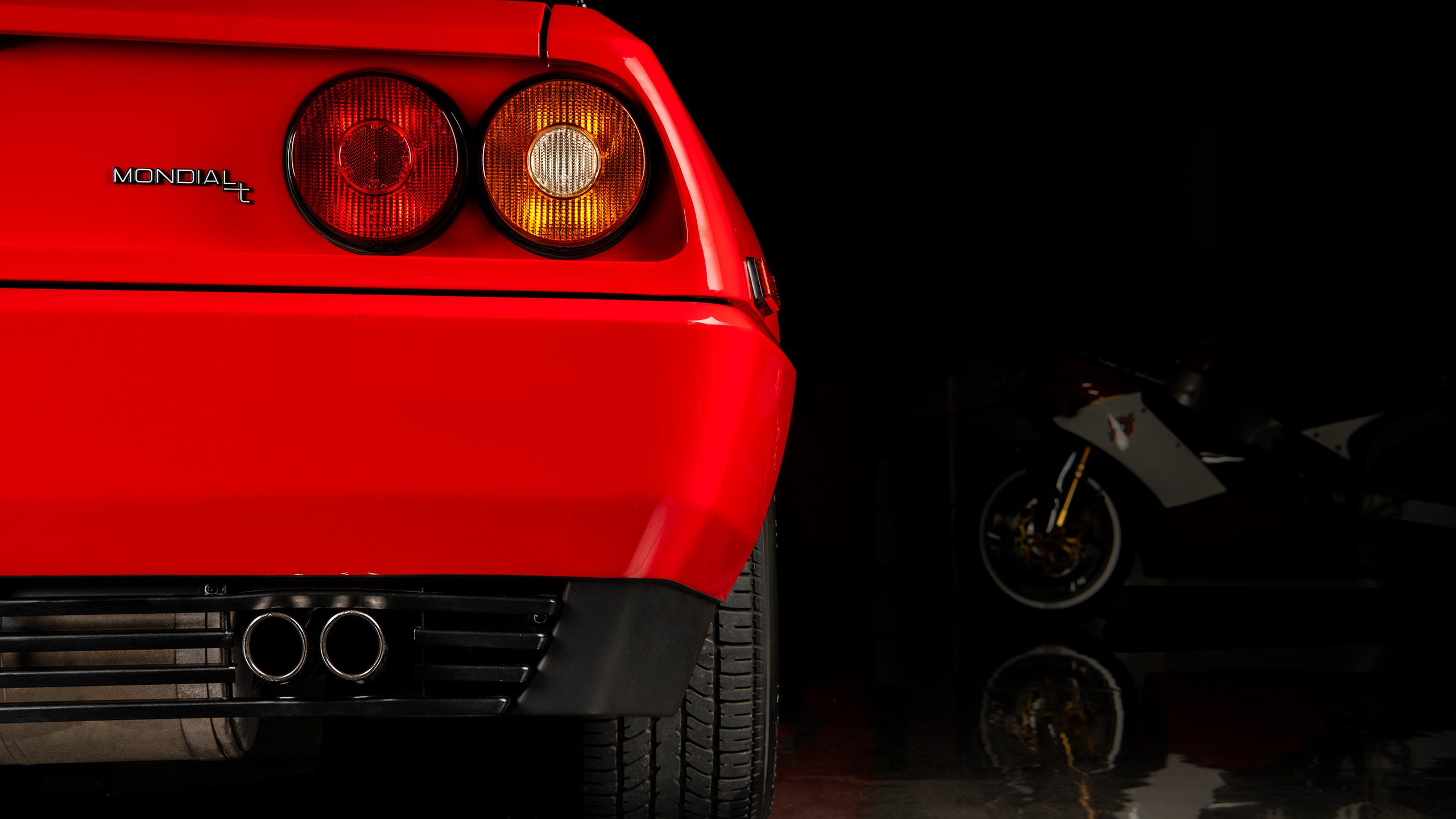 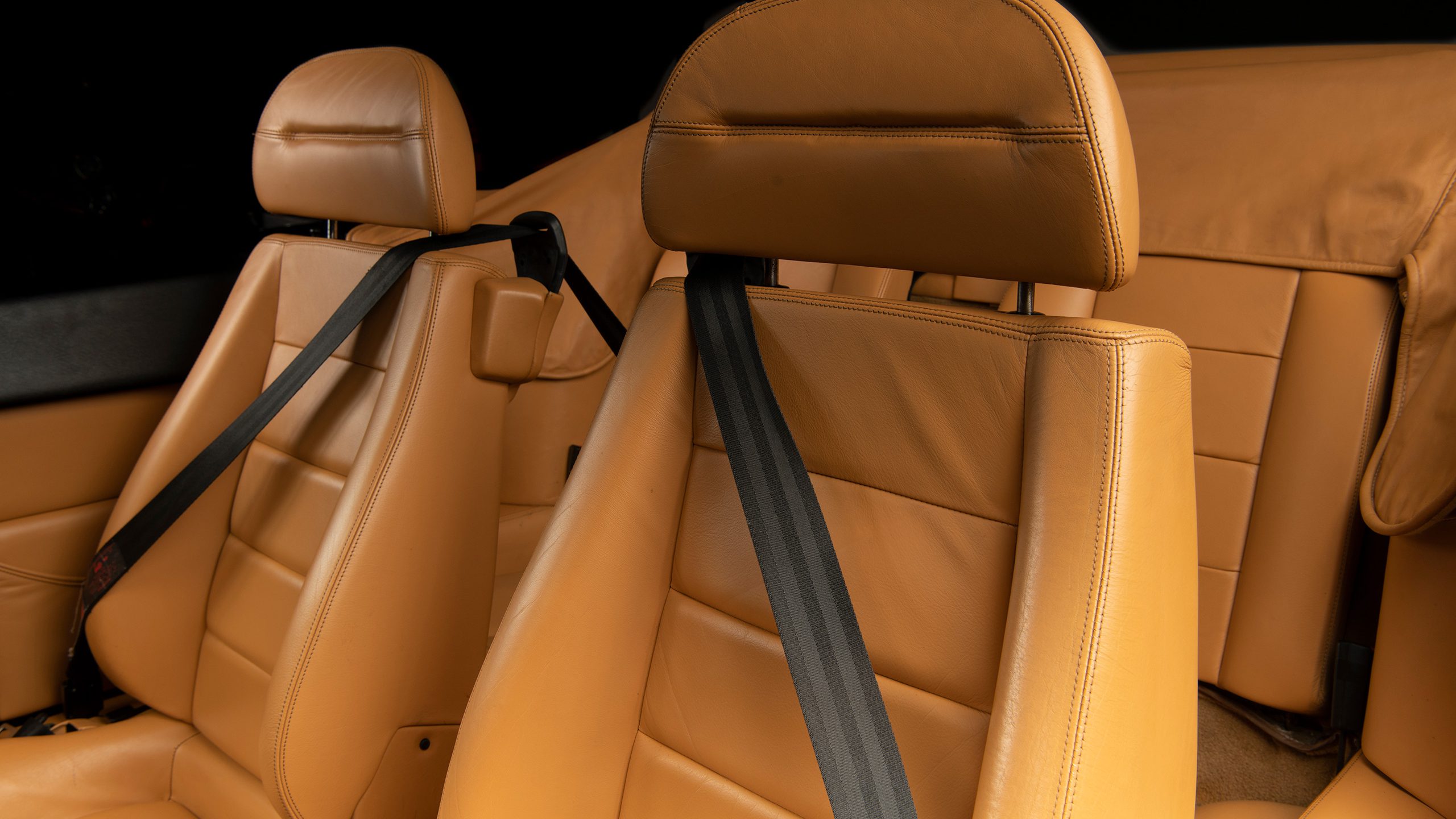 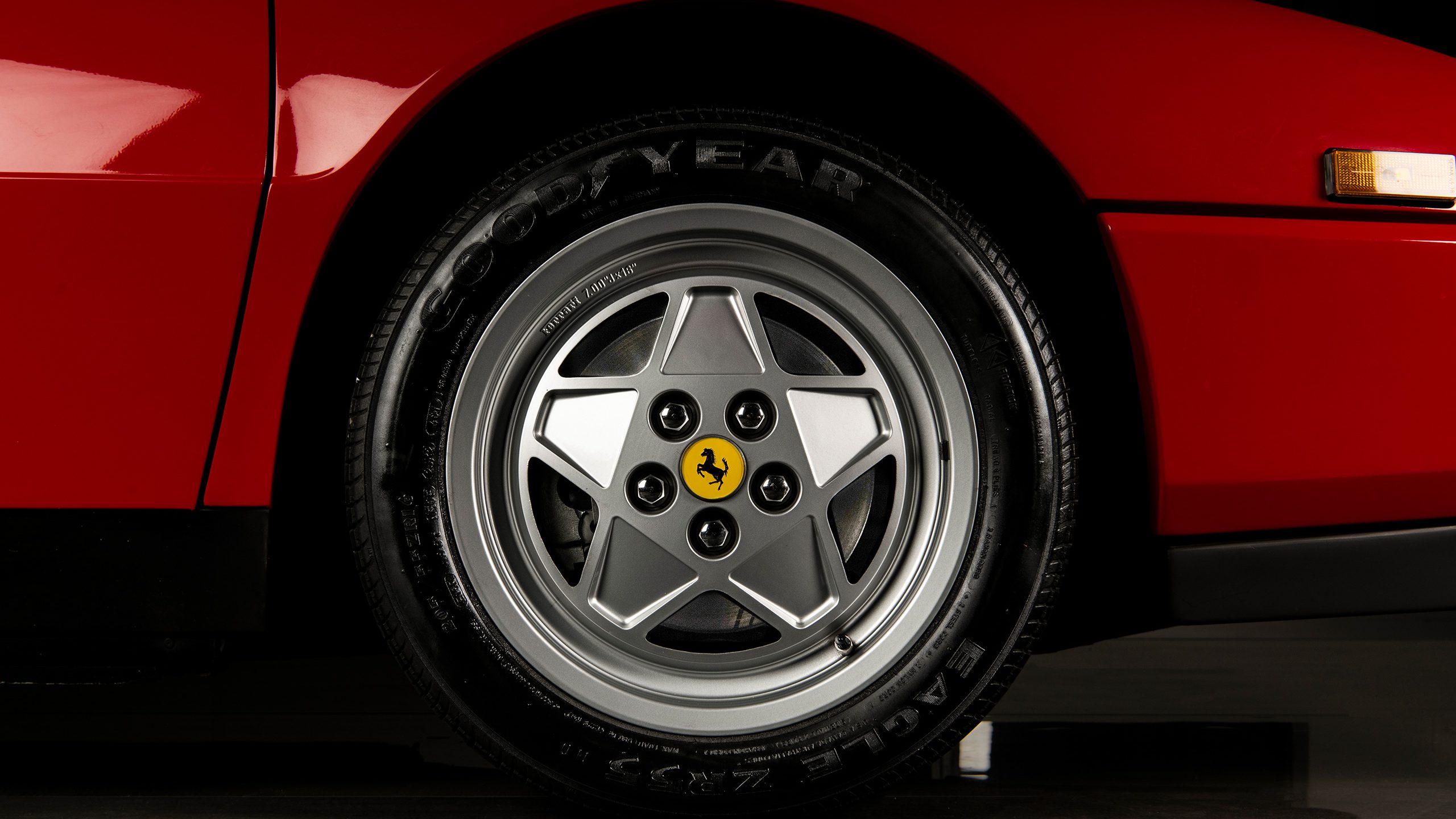 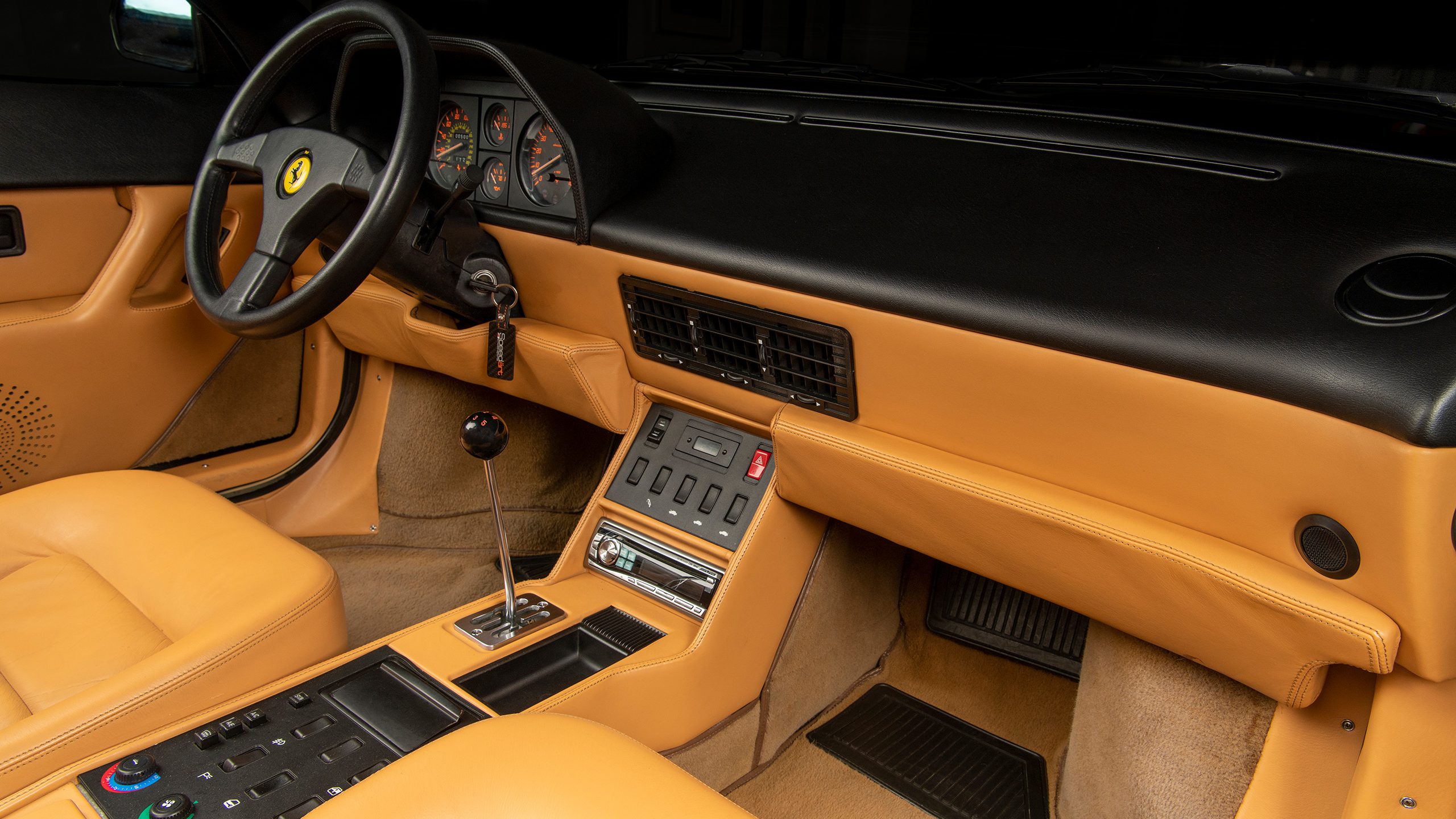 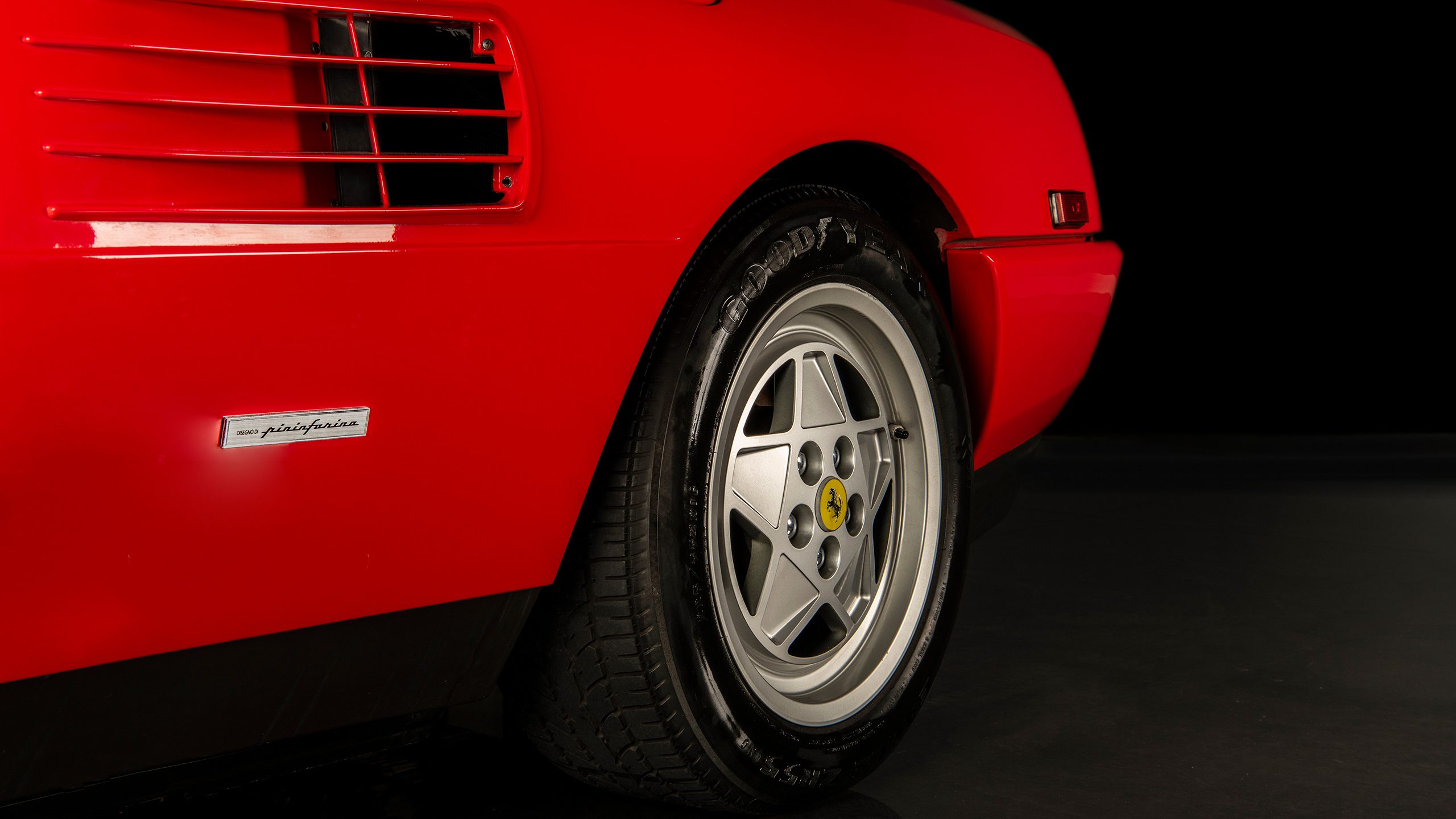 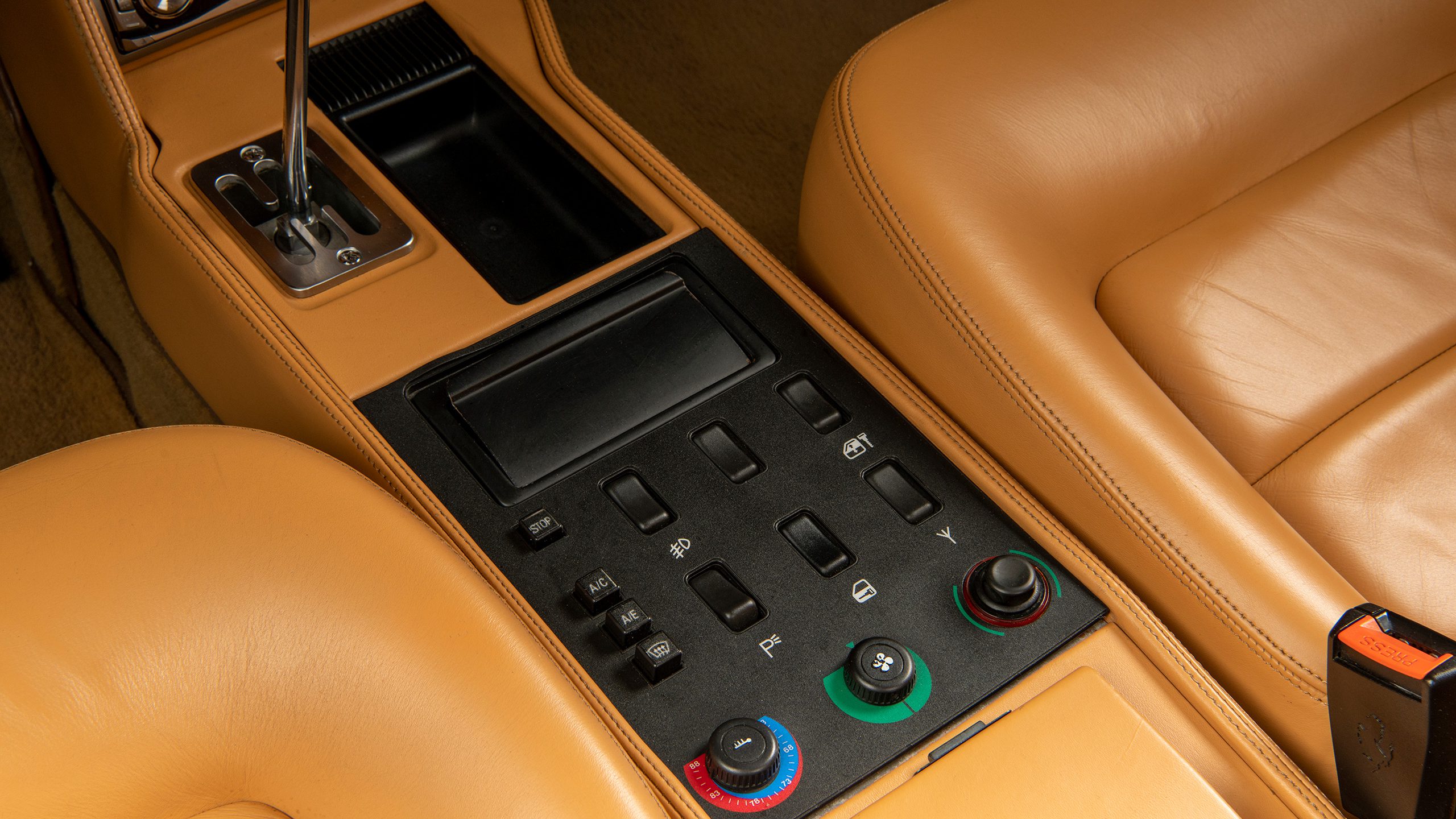 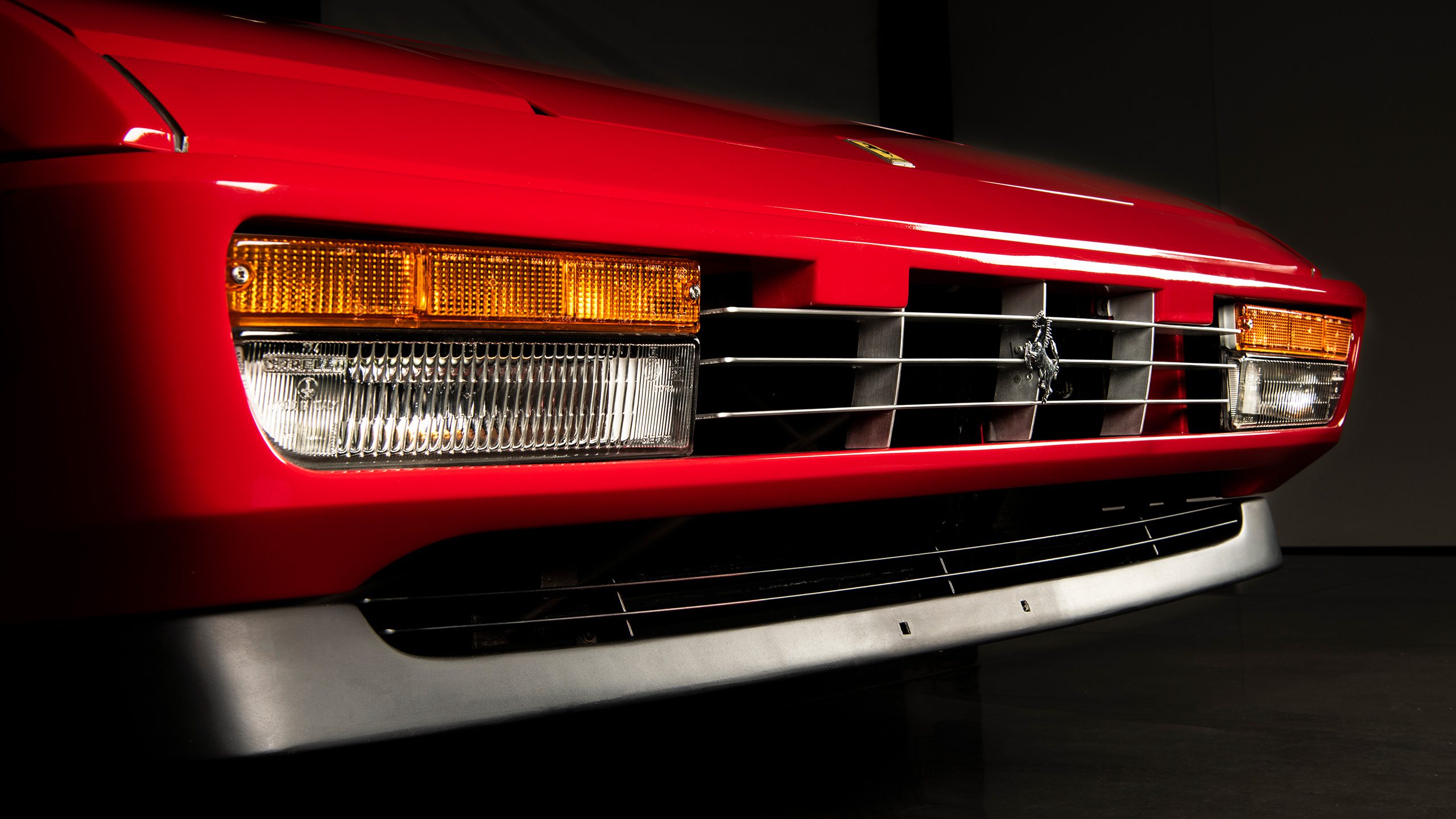 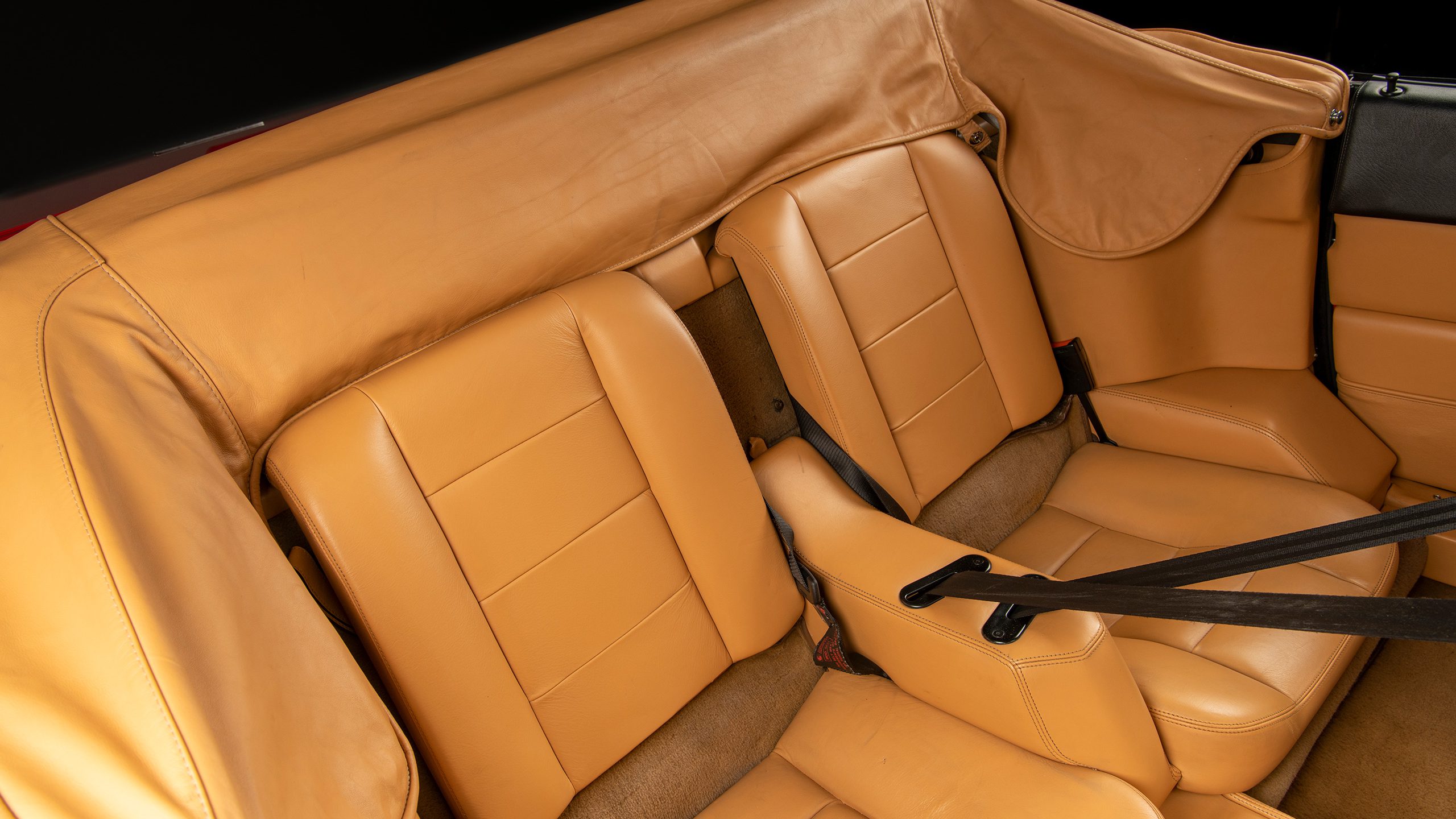 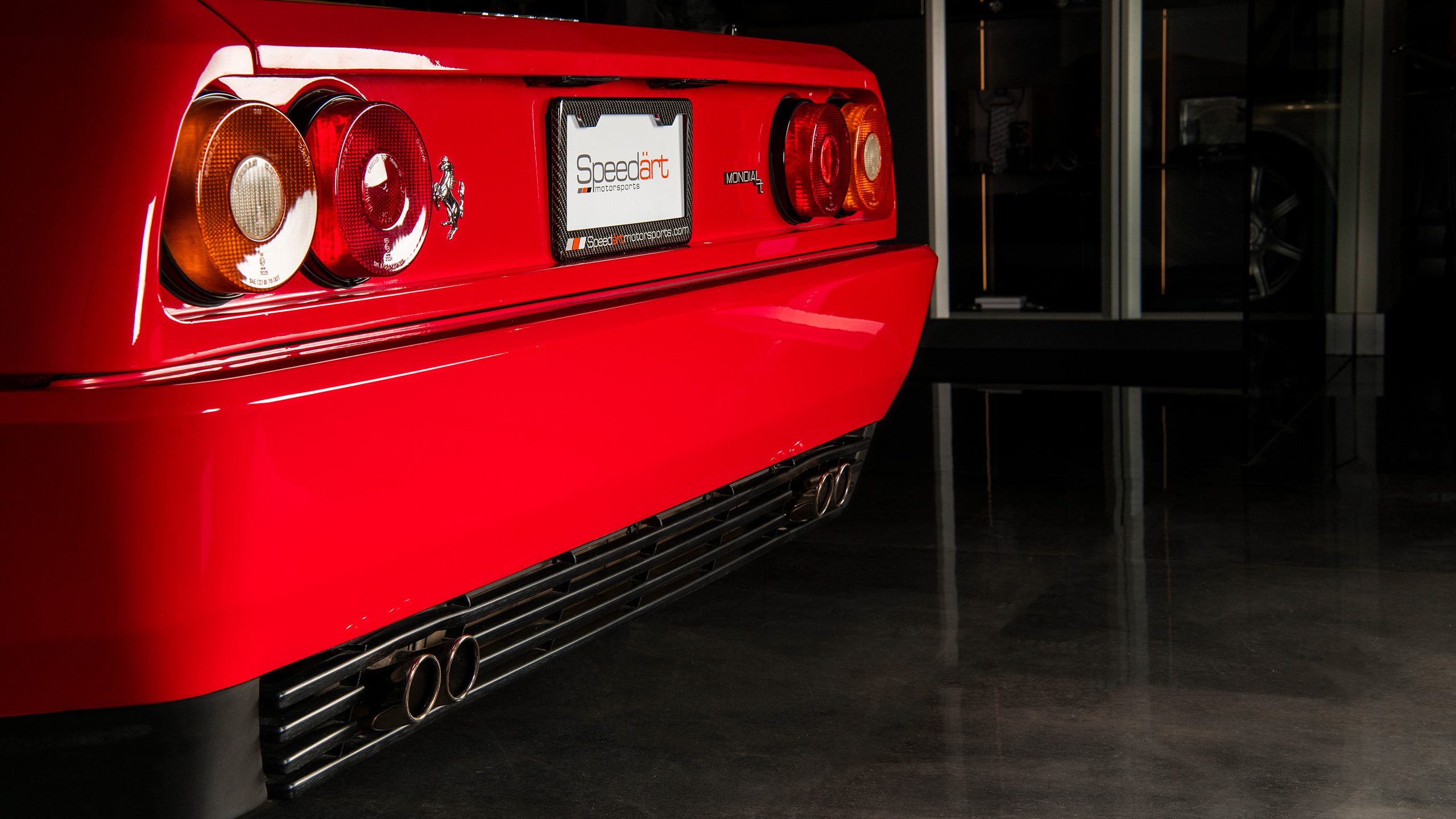 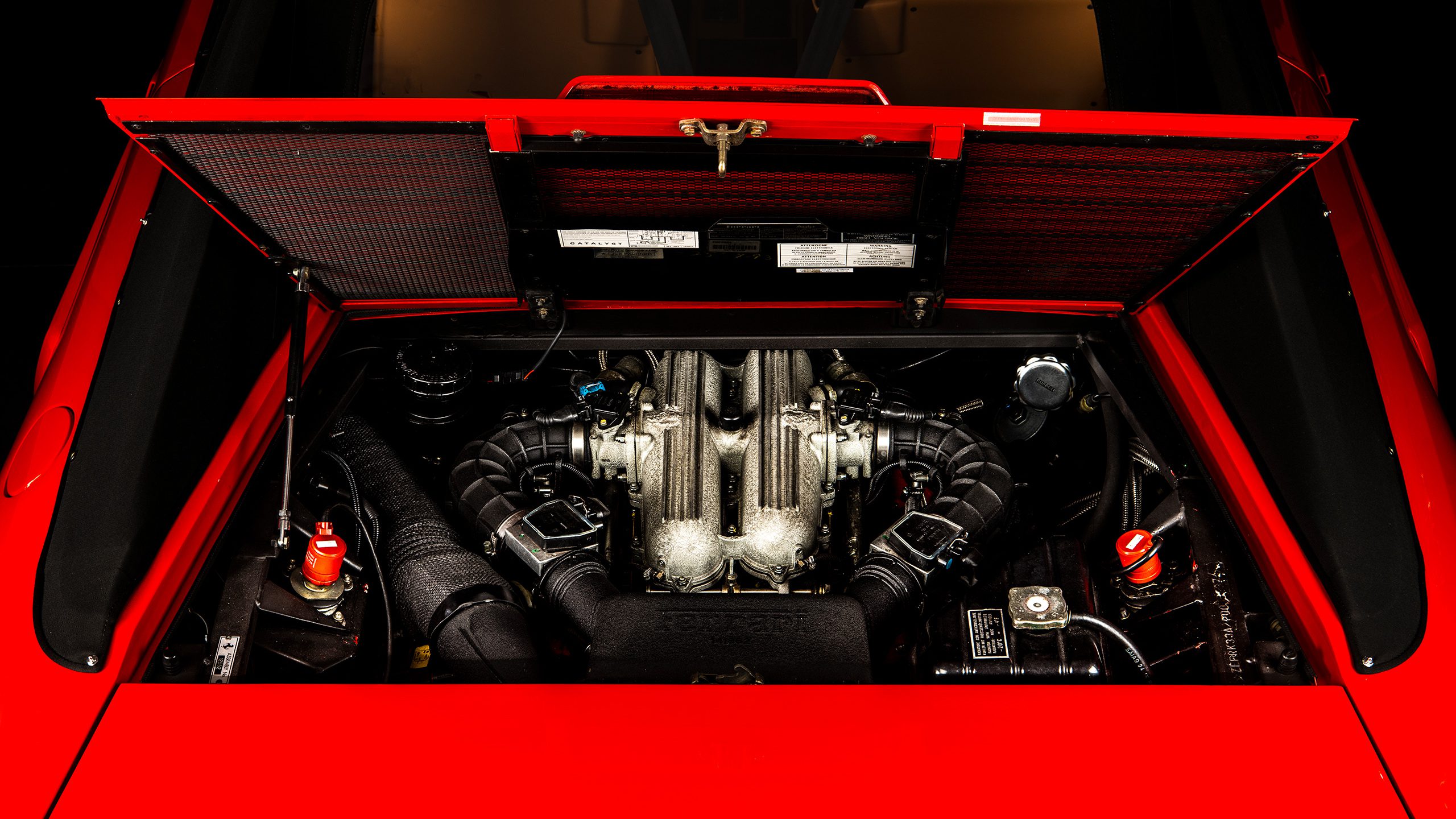 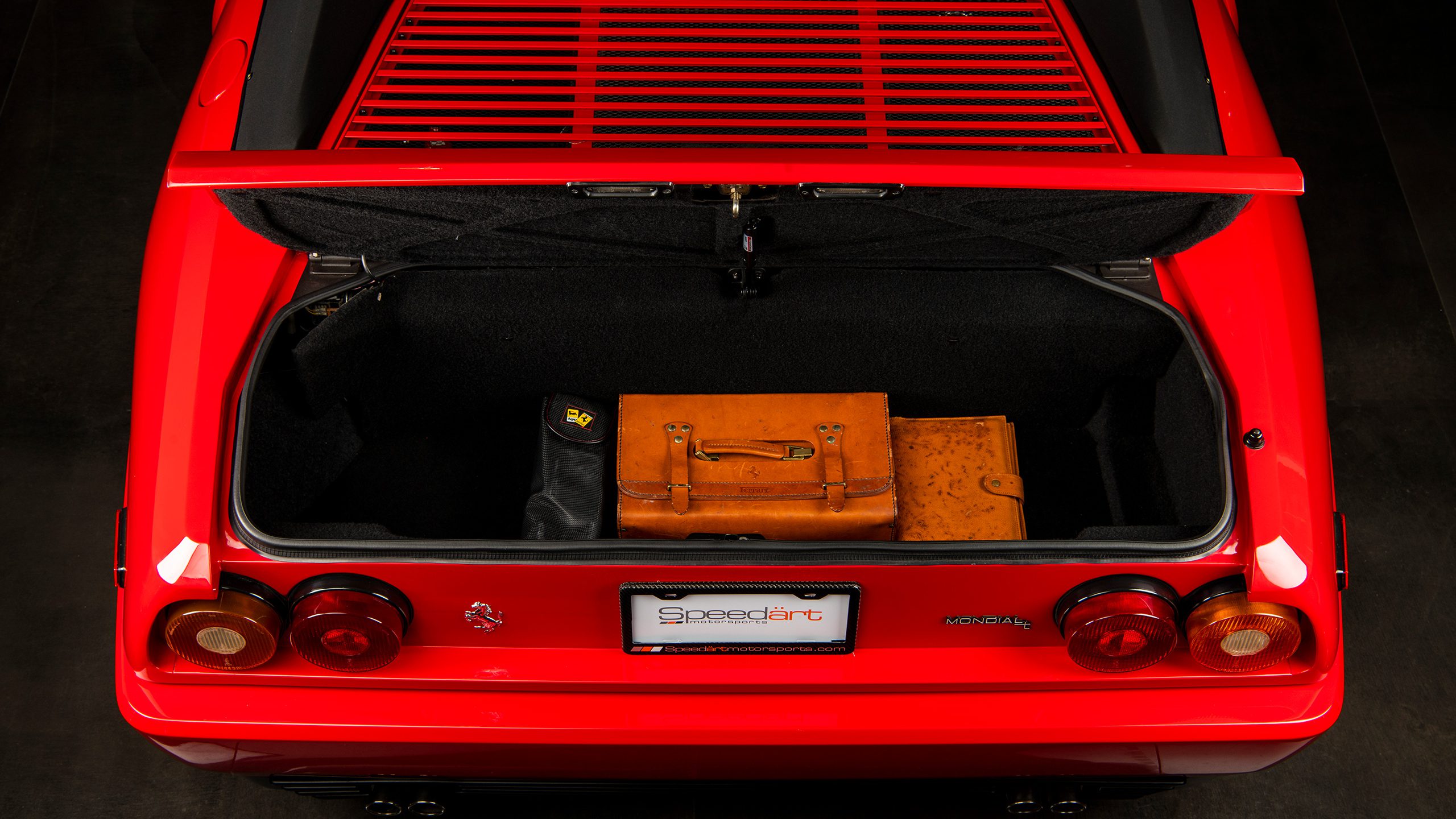 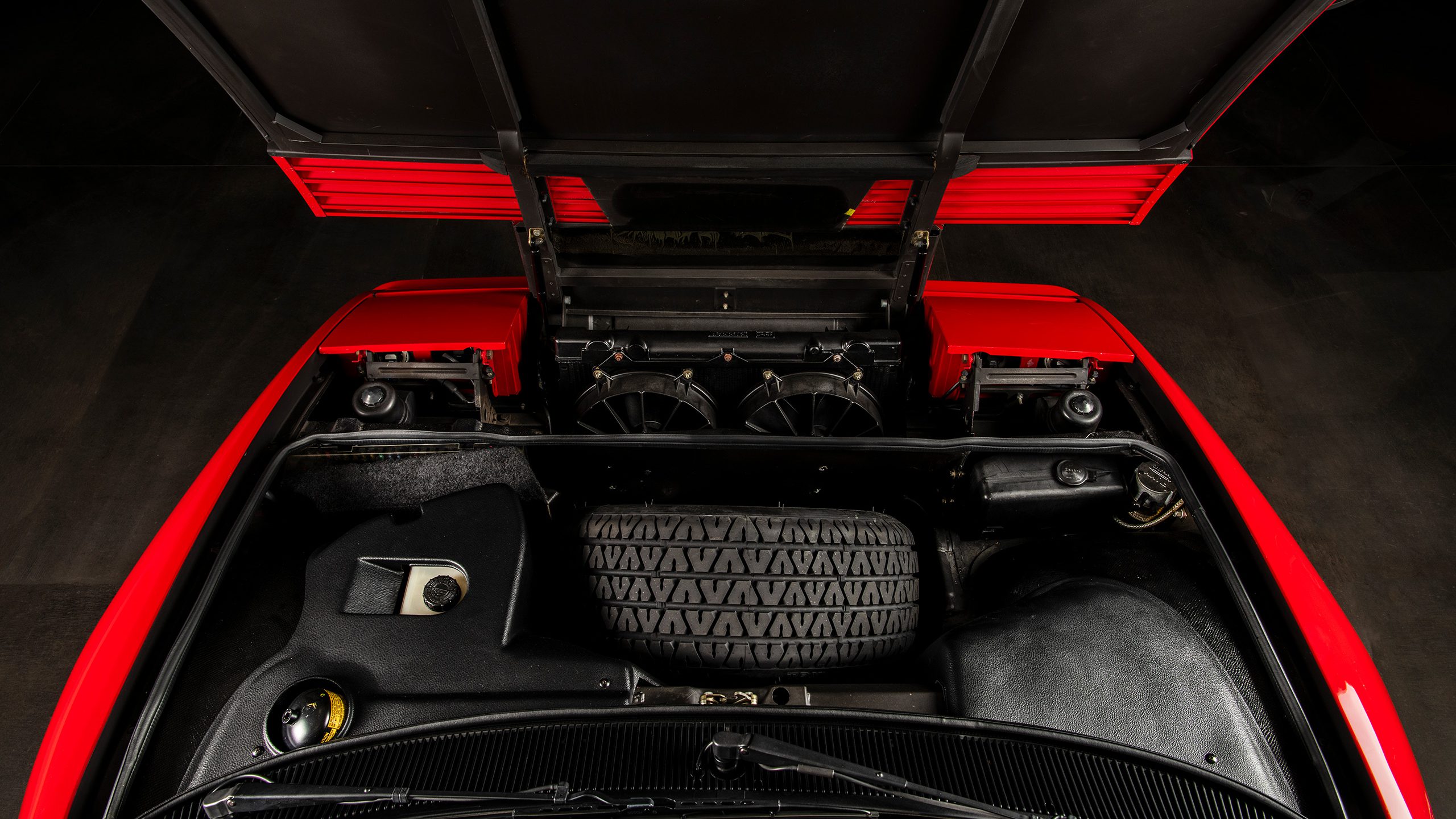 “For model year 1993, Ferrari produced a double handful of cars known as the ‘Valeo’ Mondials. Valeo is a French clutch manufacturer that produced a system with no clutch pedal but whose clutch was operated by an electro-mechanical actuator (ECM). This system could engage and disengage the clutch in 0.02 seconds! Originated for the Lancia rally team, this clutch allowed the drivers to use one foot on the brake and the other on the gas at all times, and it contributed greatly to Lancia’s back-to-back world rally championships.

The ECM operated like a manual transmission: Lift off the gas, move the gear shift lever by hand, get back down on the gas, and the clutching was handled without any footwork. If you look in the footwell and see no clutch pedal, this is a ‘Valeo’ car. The system is capable of picture-perfect burnout standing launches and even full-throttle shifts. But beware! The module that controls it has a memory, and when you take your worn out Valeo in for service, the mechanics can read the history of your driving style. According to insiders, the Valeo was extremely trouble-free. It was available in coupes as well as cabriolets in Europe, but as only the cabriolets were sold in the US, that is how you’ll find them here. With its reliability and its rarity, fewer than 30 were imported in 1992 and it is destined for desirability”  – Fourth Edition Illustrated Ferrari Buyer’s Guide of Dean Batchelor and Randy Leffingwell.

The final Mondial evolution was 1989’s Mondial t. It was a substantially changed model, “spearhead of a new generation of V8 Ferraris”, according to Road & Track magazine. It was visually different from preceding Mondial models, the most recognizable being the redesign of the air intakes to a smaller rectangular shape. Additionally, the door-handles were of a visually different design, as were the front and rear bumpers which became body-colored. New front and rear wings cover wider tracks and are re-profiled to a fuller shape compared to previous models, which feature a rolled lip.

The ‘t’ called attention to the car’s new engine/transmission layout: the previously transverse engine mounted longitudinally while the gearbox remained transverse, thus forming a ‘t’. The ‘t’ suffix was also homage to the first use of a transverse transmission by Ferrari in the highly successful Ferrari 312T, driven by F1 World Champion Niki Lauda. By adopting this layout, a longer engine could be mounted lower in the chassis, improving handling dramatically. The ‘t’ configuration was used by Ferrari’s Formula One cars of the 1980s, and would be the standard for the marque’s future mid-engined V8 cars, beginning with the 348, introduced later in the year. The transverse manual gearbox fitted with a Limited Slip Differential with a twin-plate clutch design with bevel gears driving the wheels. Later in production, an electromechanical-actuated clutchless manual transmission, termed Valeo, was available as an option; where the driver would change gear using a traditional H-pattern gearshift, but the clutch was automatically actuated through electronic equipment, eliminating the need for a manually-operated clutch pedal.

The new layout saw the engine and transmission mounted on a removable subframe; the assembly removed from the underside of the vehicle for maintenance. This process is necessary for timing belt replacement, making this a costly procedure for the owner who does not have a lift. On the other hand, the clutch was now located at the very rear of the drive train. This arrangement makes clutch replacement and service a simple, inexpensive, and readily owner-doable proposition.

The engine was up to 3.4 L (3405 cc) and 300 hp (224 kW). The engine controlled by Bosch Motronic DME 2.5 (later DME 2.7) electronic engine management that integrated EFI and ignition control into a single computer unit. Two of these used in the car: one for each bank of the engine. Engine lubrication upgraded to a dry-sump system.

The “t” was home to other Ferrari firsts: It used power-assisted steering for the first time and had a 3-position electronically controlled suspension for a variable tradeoff between ride quality and road holding. It also had a standard antilock braking system. The Mondial t represented the most substantial upgrade to the Mondial model line in performance and handling since its introduction in 1980. The “t” offered greater performance while retaining a mid-engined layout and a practical packaging layout, and was once again, favorably received.

The Mondial’s chassis would underpin a new generation of 2-seat Ferraris, right up to the Ferrari 360, but the 2+2 Mondial would end production just four and a half years later in 1993. However, the “t” layout of the engine and transaxle, adapted from Ferrari’s Formula One cars, continues to be used in mid-engined V8 model Ferraris to date, albeit with a more sophisticated chassis.

The company has not produced a mid-engined 2+2 car since then, leaving the 2+2 configuration to the more classic front-engined design starting with the 456 in 1992. As of 2018, the V12 GTC4Lusso and both the twin-turbocharged V8 GTC4 Lusso T and Portofino were the company’s only 4-seat vehicle offerings, and by 2020 the GTC4 Lusso line was dropped and the Roma introduced, but all of these are front-engined, leaving the Mondial t as the most modern 4-seat, mid-engined, Ferrari yet produced in 28 years.

At Speedart Motorsports we are delighted to present this unique opportunity, the final evolution of the Mondial series in décapotable livery and optioned with the ultra rare Valeo gearbox.

Chassis number 95437 was completed at the Modenese factory on September 1992, arriving and delivered to its first custodian in the following year. This ‘Valeo’ variant is one of less than 100 produced by Ferrari S.p.A. and one of only 25 examples imported into North America. The Convertible Mondial T stayed with its original owner for almost 27 years, driven sparingly and maintained to the highest standards as part of a significant car collection. With the exception of a compact disc face unit, the motorcar is of unquestionable originality and it is believed to be incident free.

The Convertible Mondial T is presented in spectacular condition both cosmetically and mechanically and is accompanied by books, keys, tool kit and boot cover as supplied by the manufacturer when new.

Speedart Motorsports invites all serious inquiries and interested parties to witness up-close and personal this classic grand tourer in our motoring gallery, located near the design district of Miami.