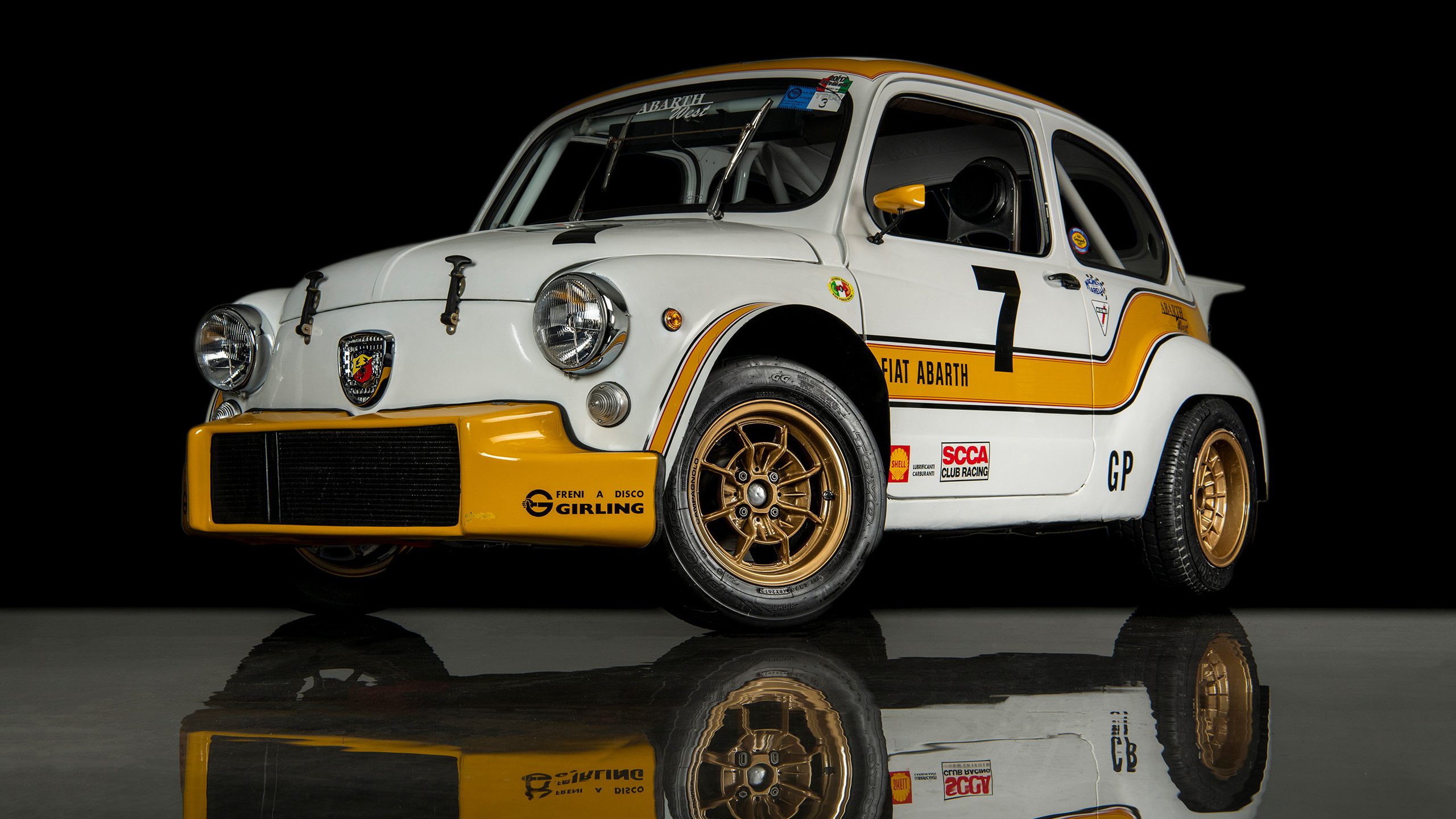 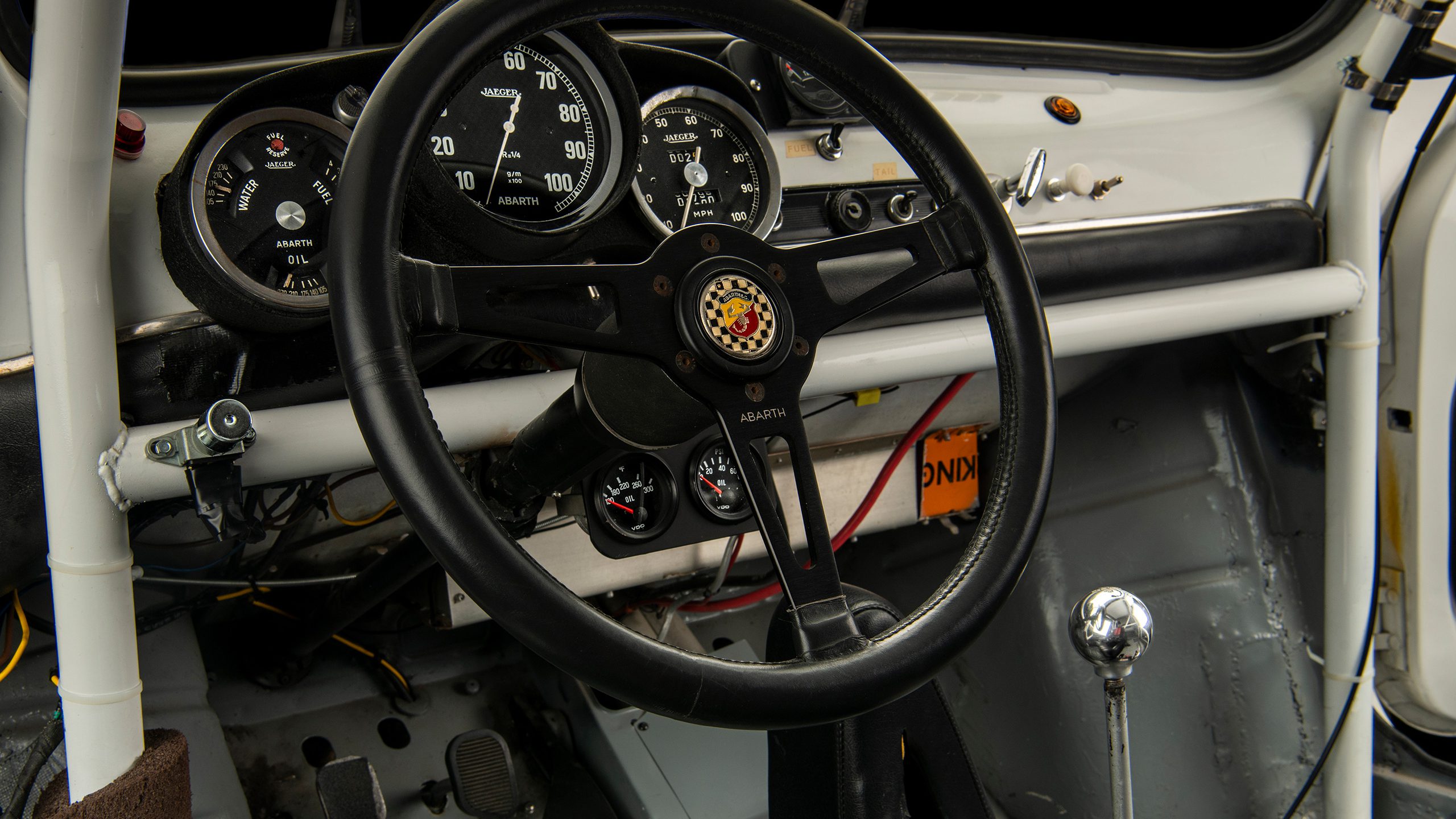 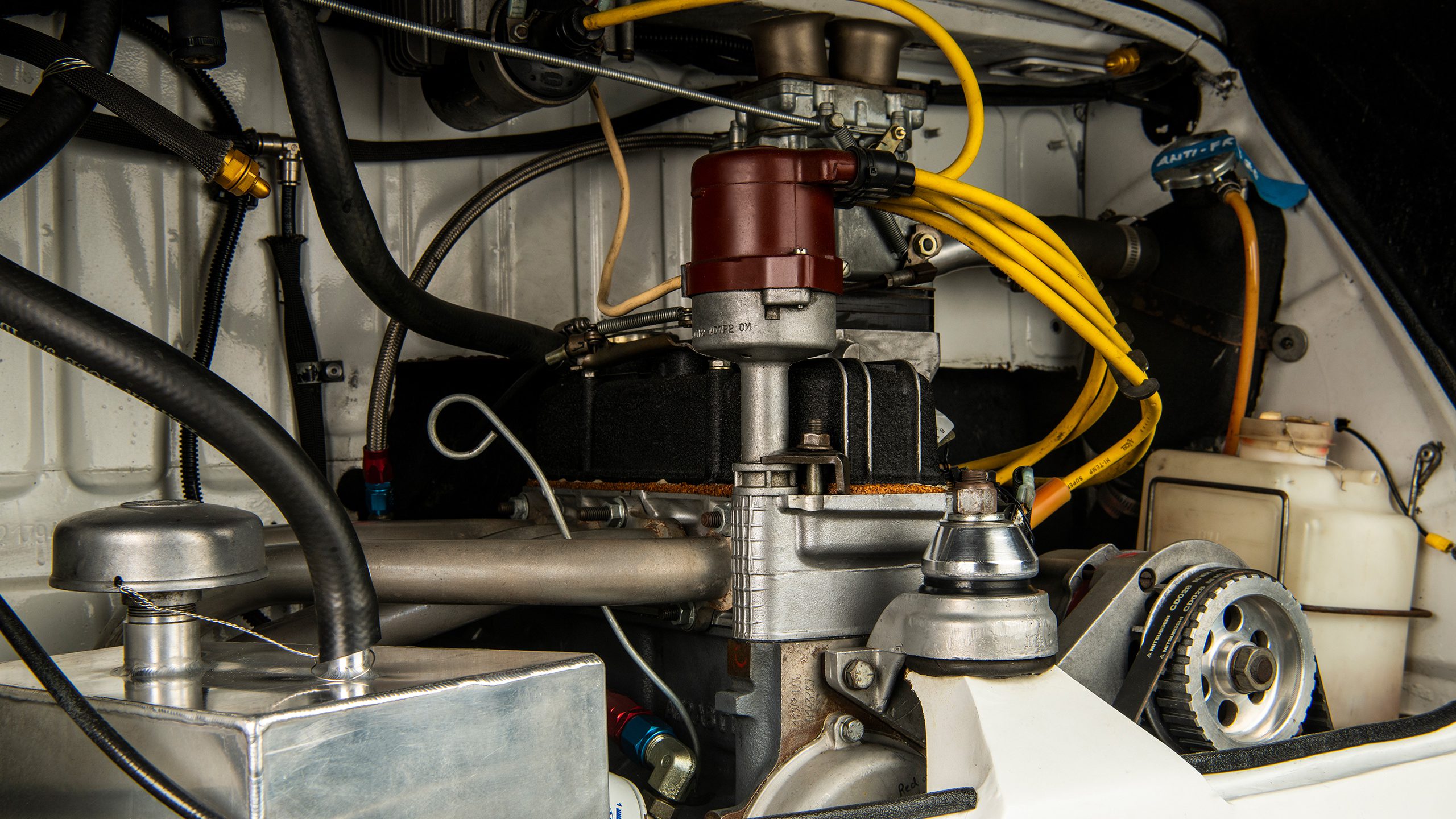 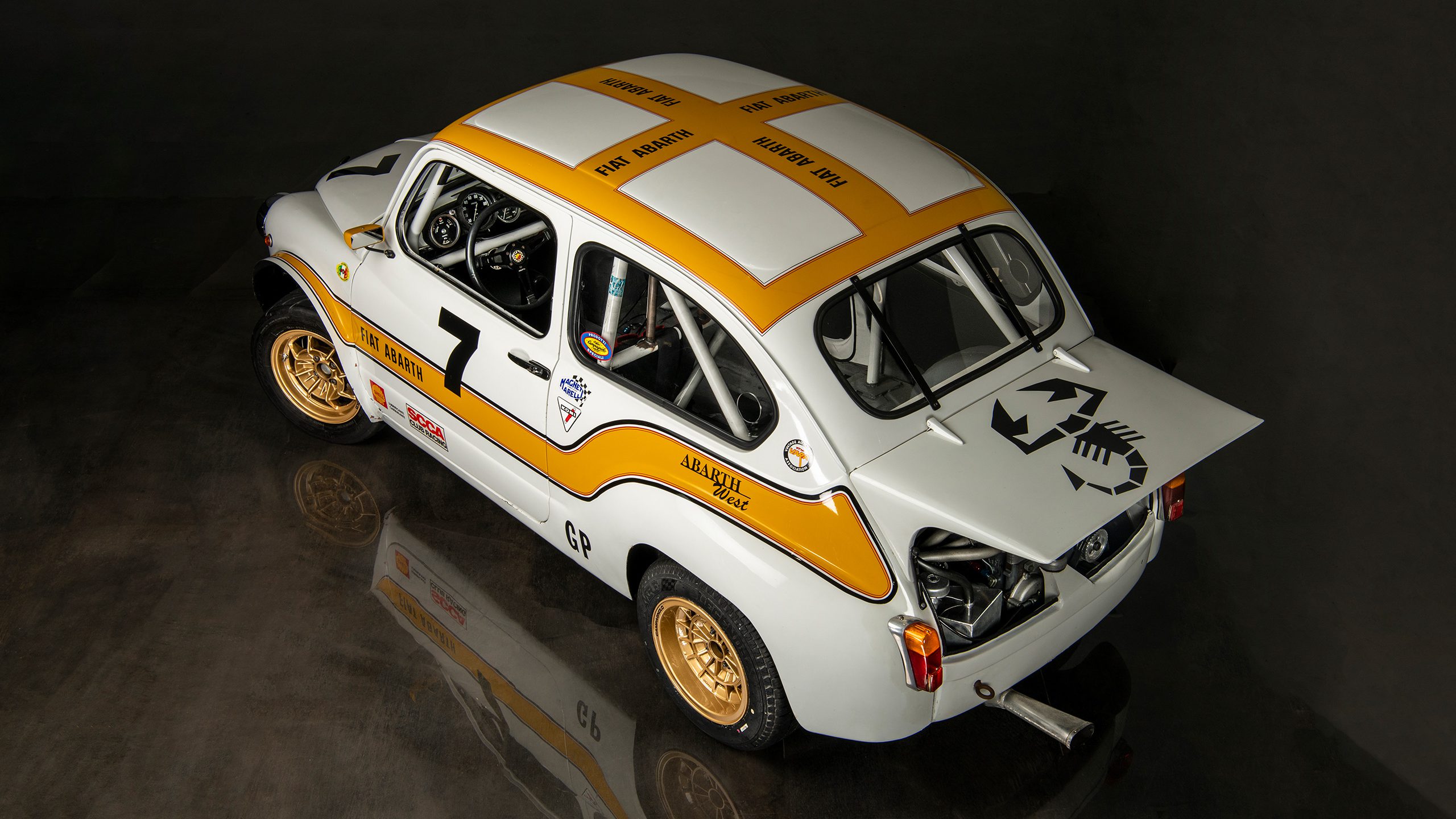 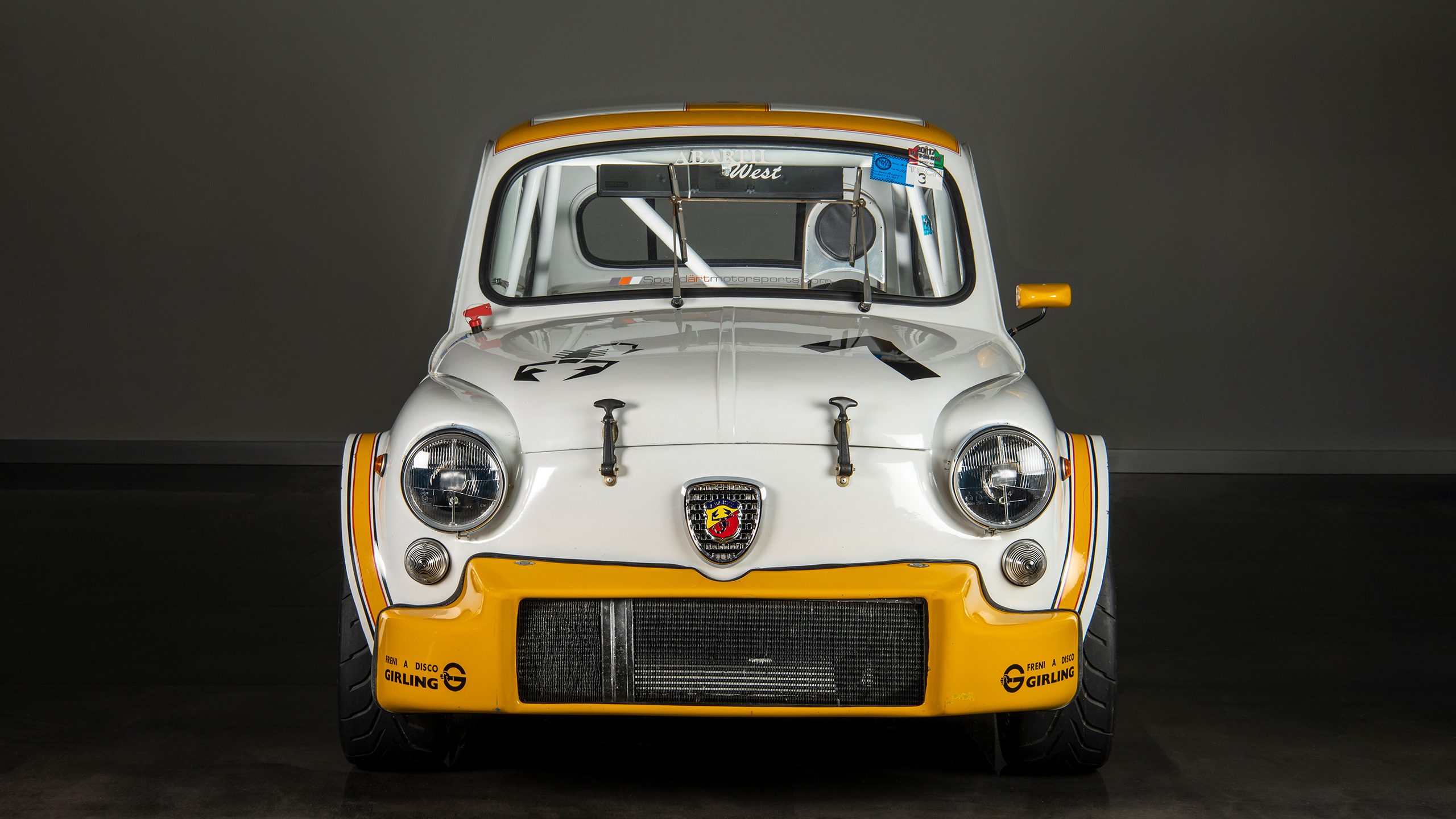 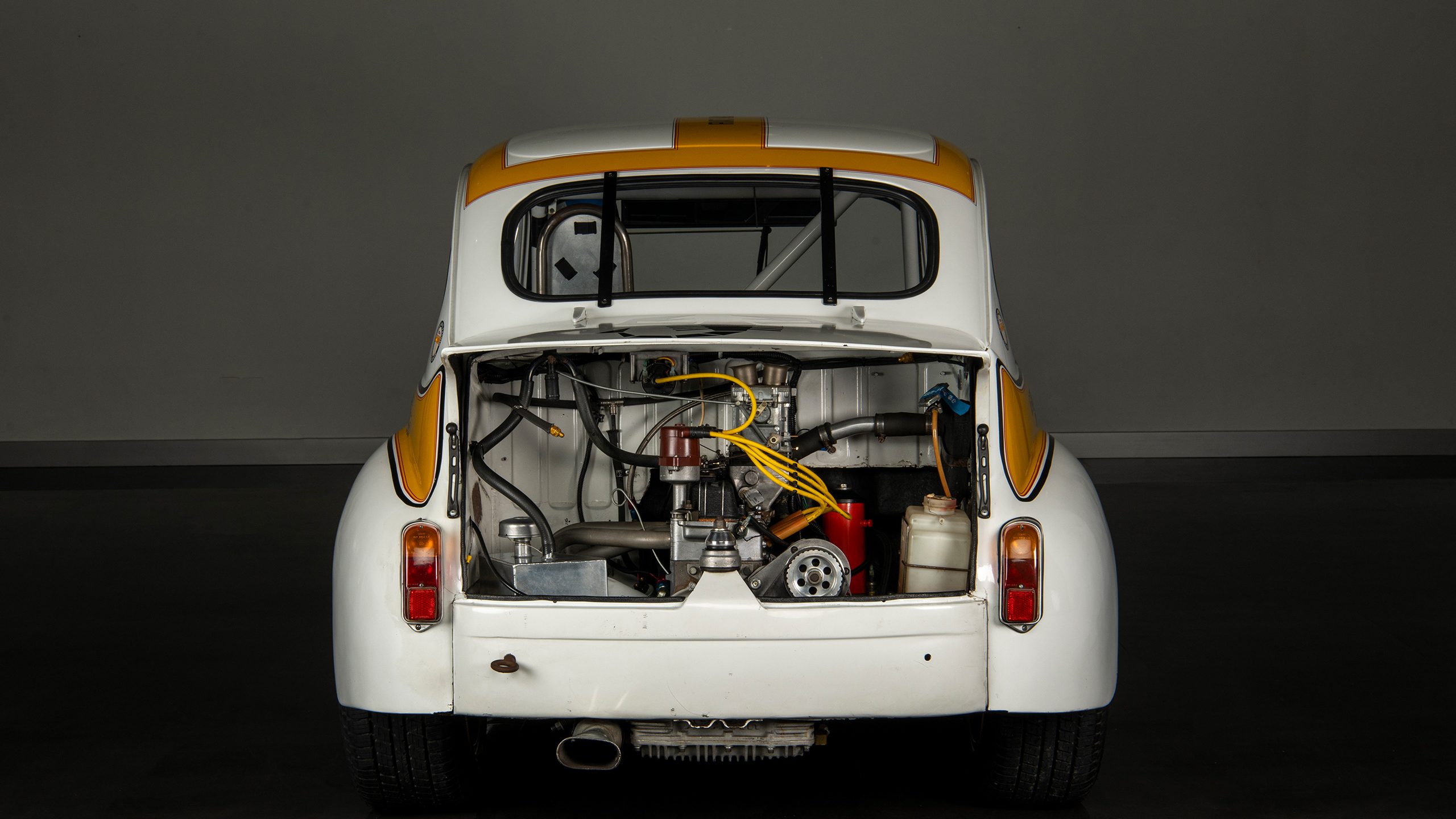 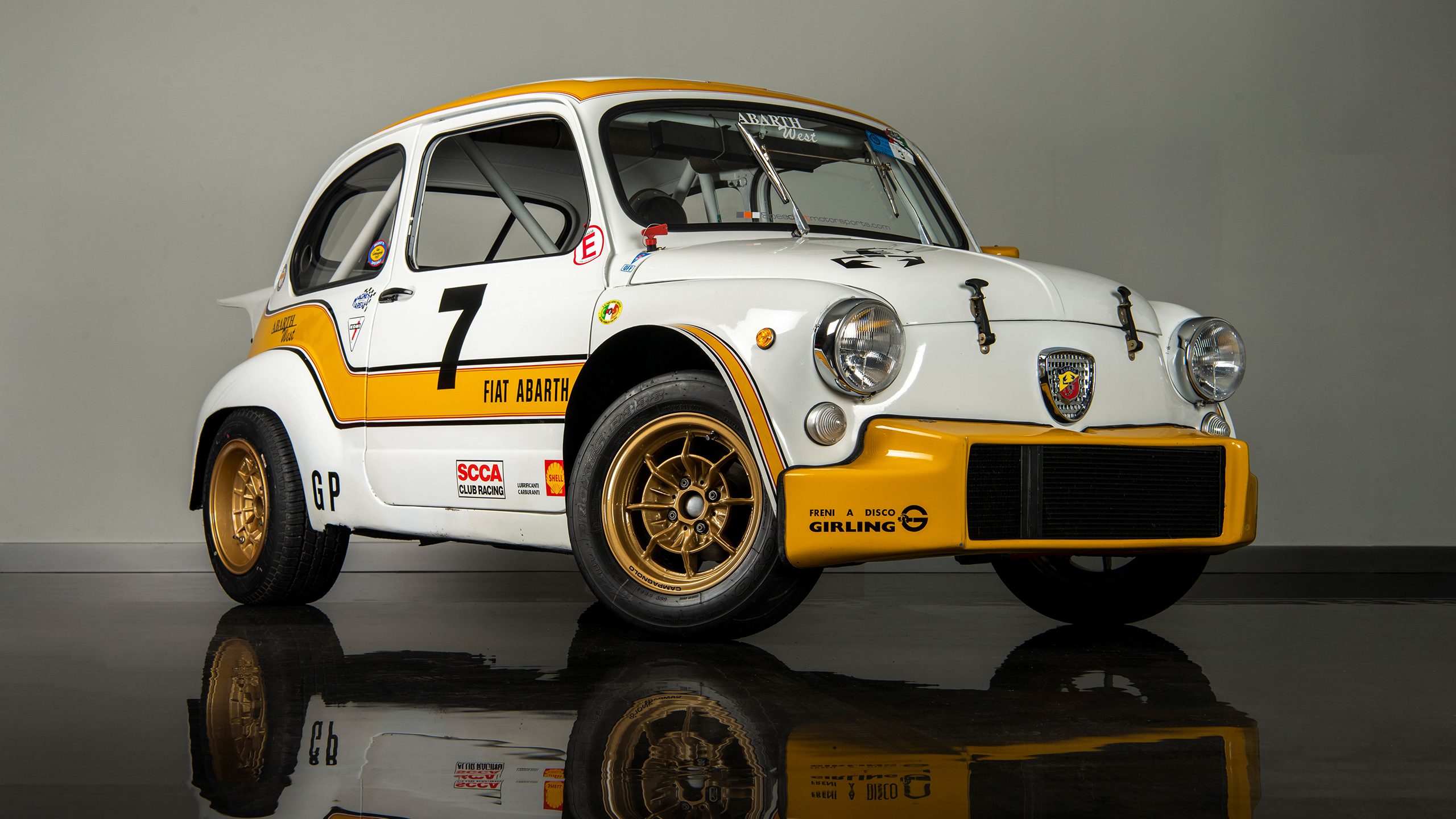 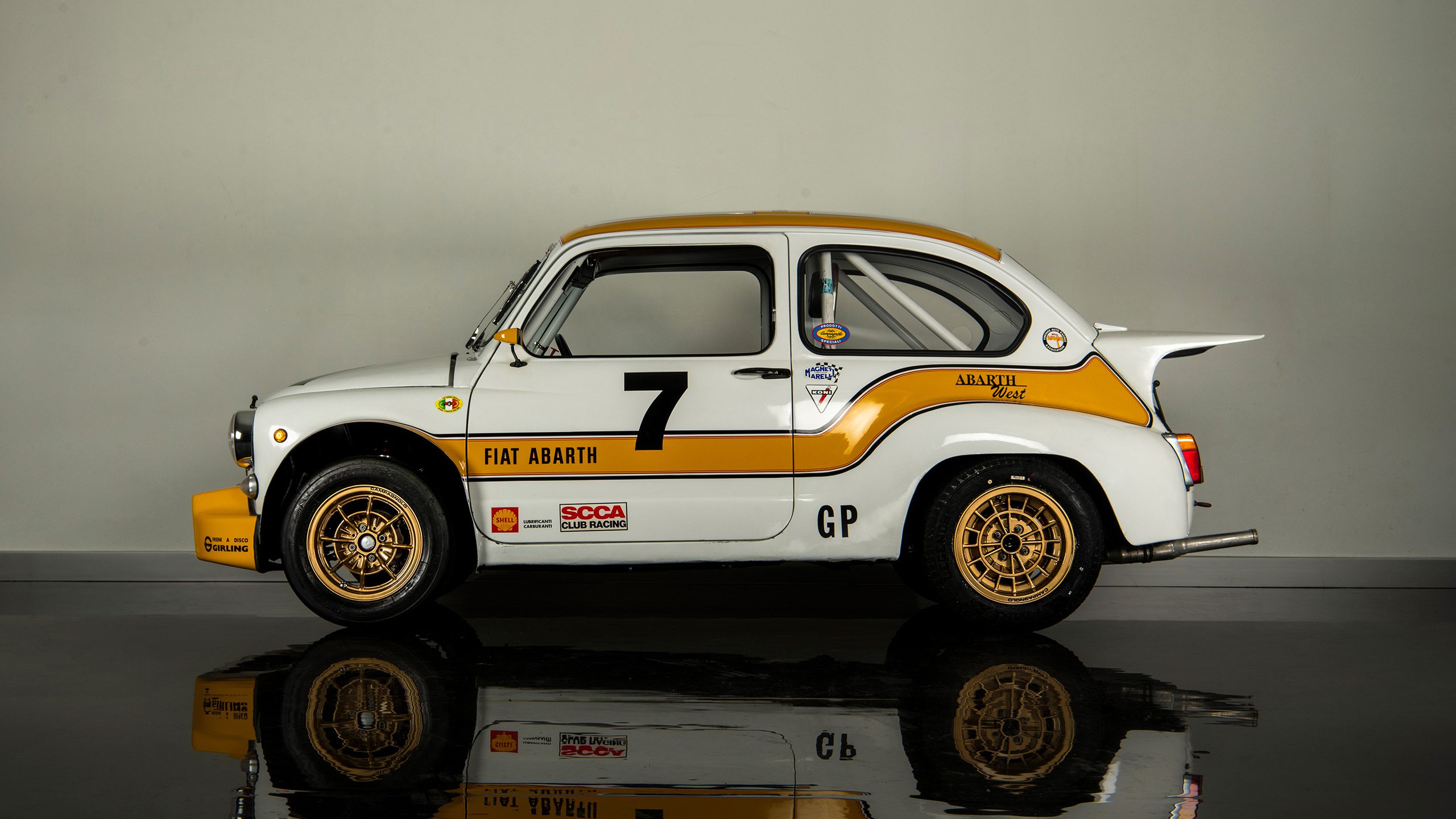 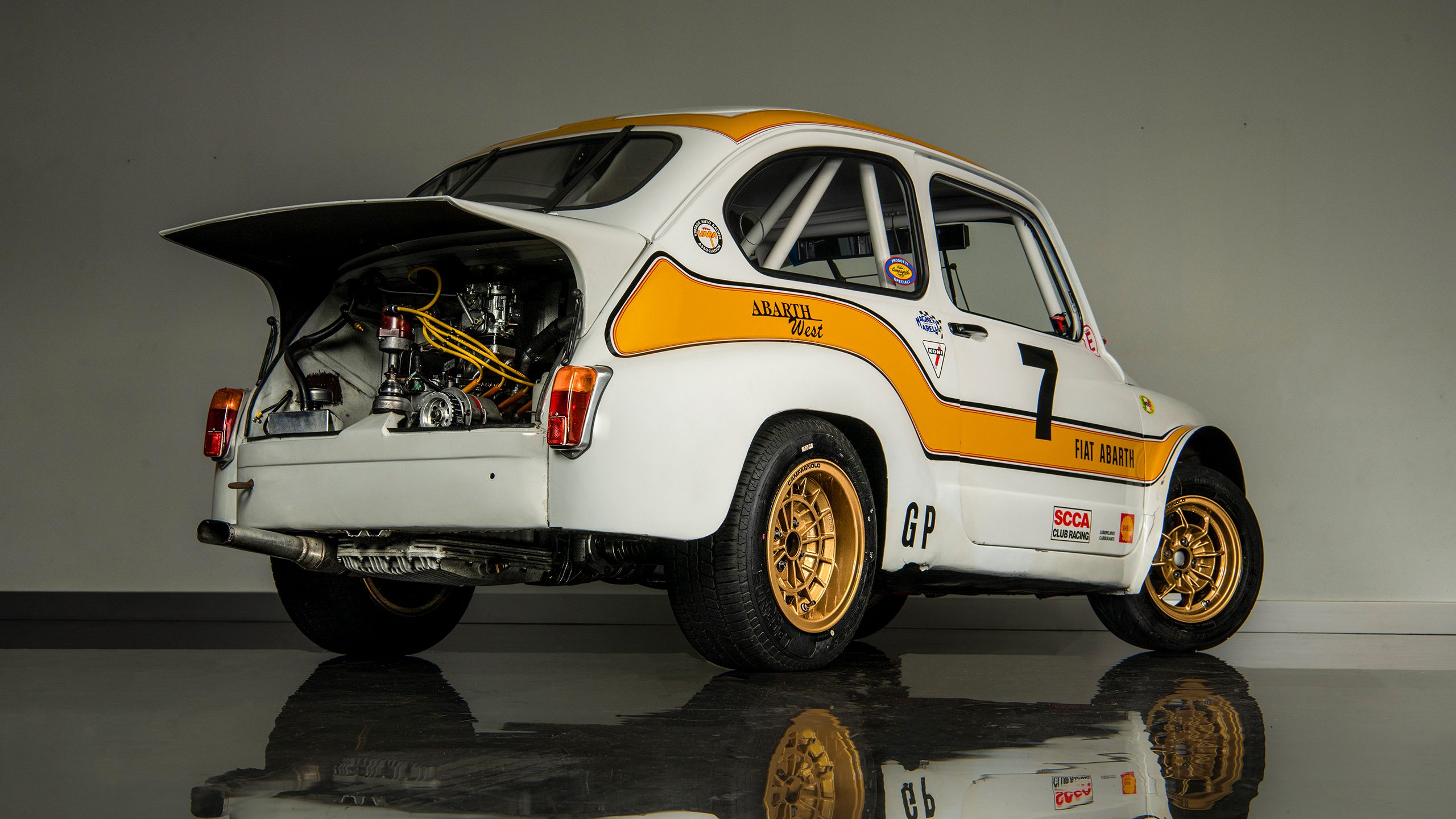 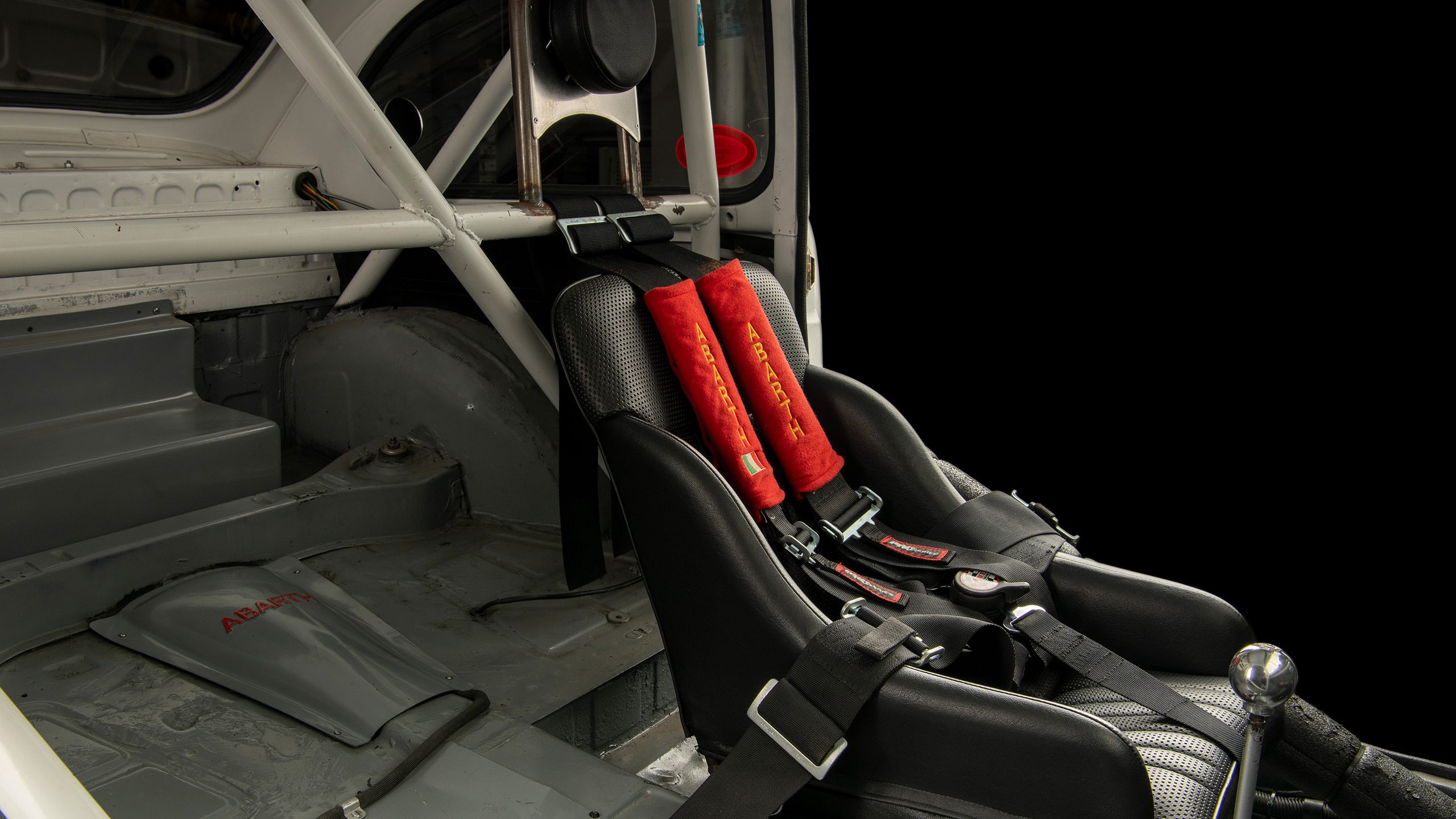 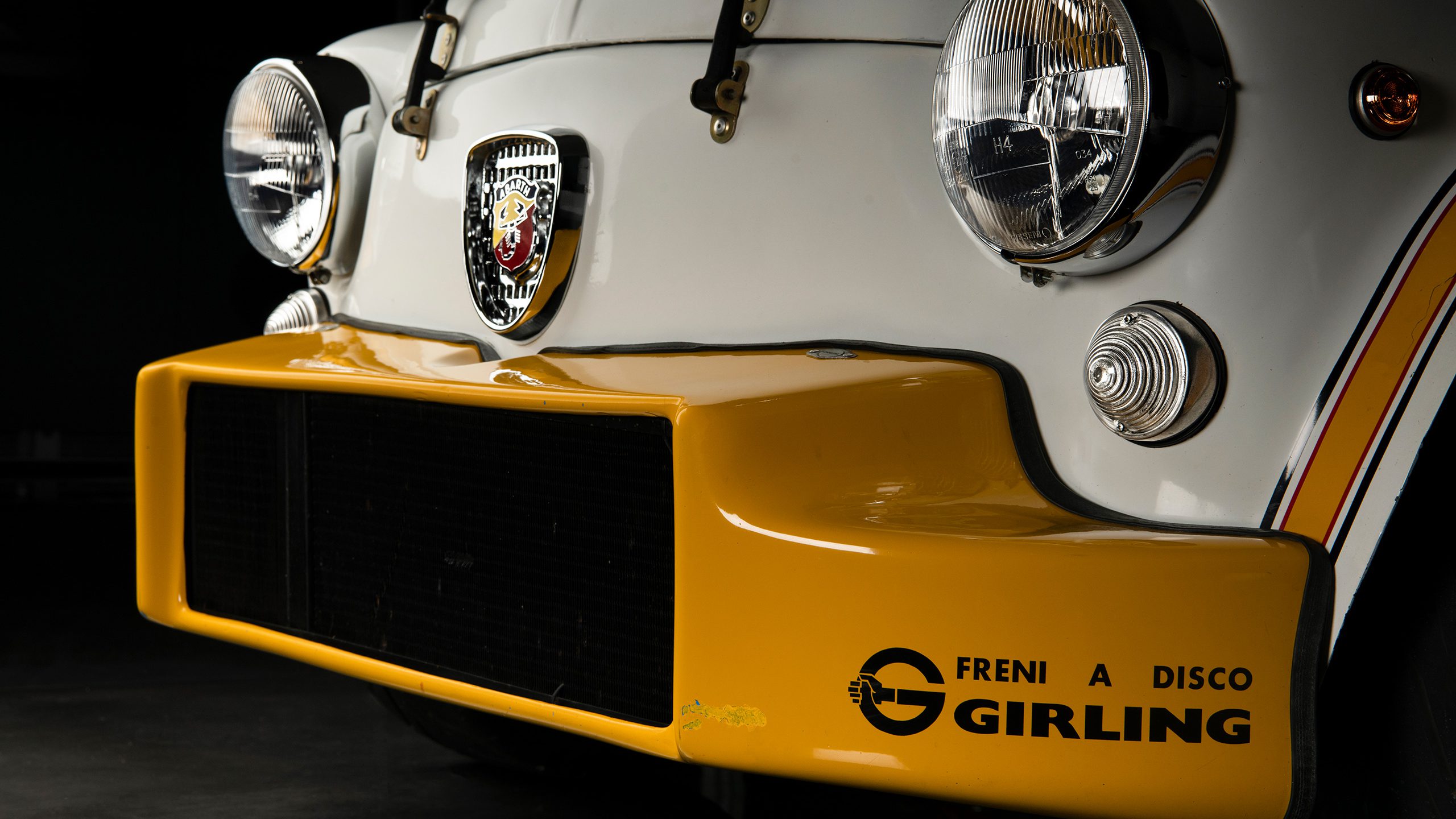 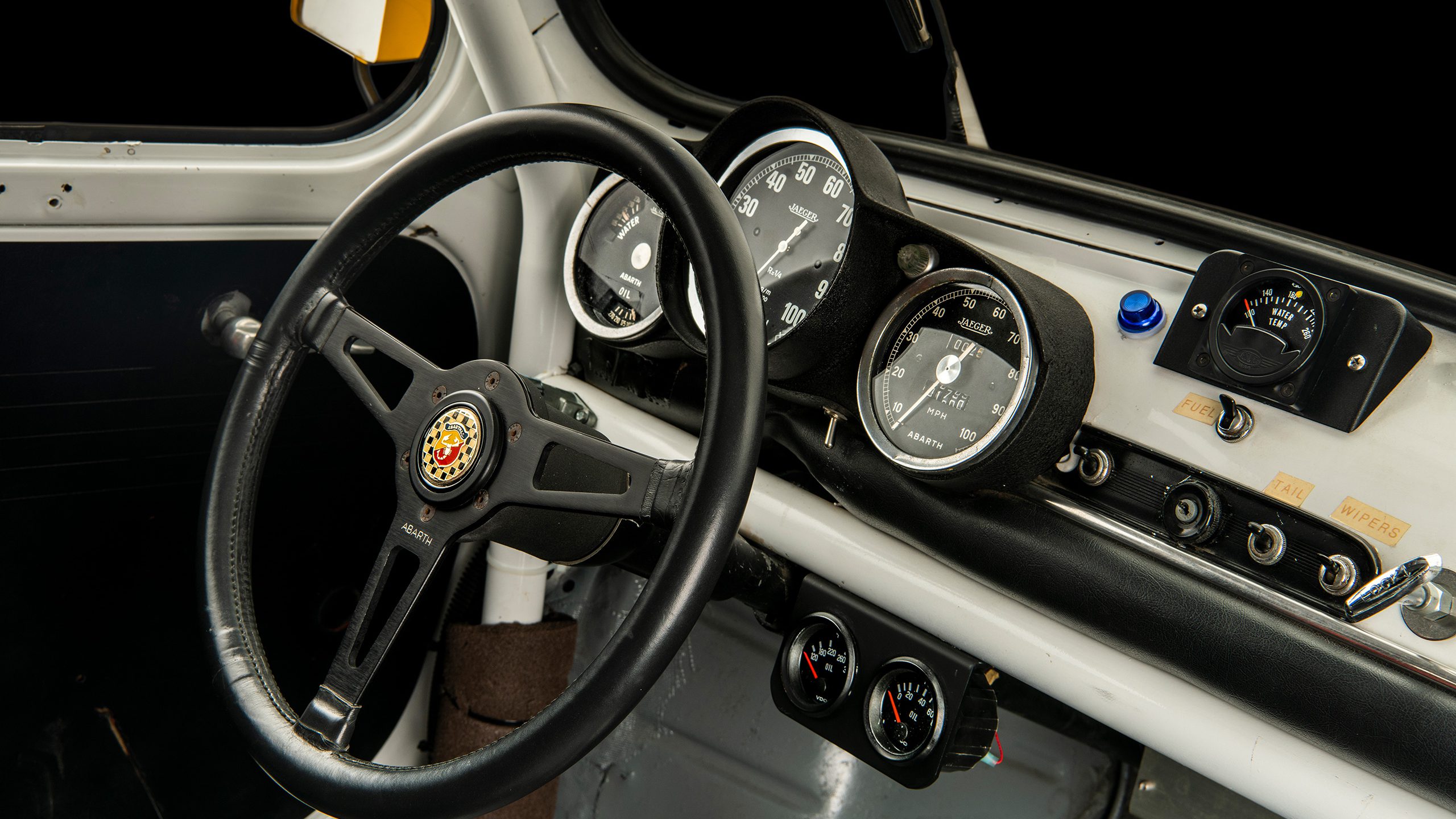 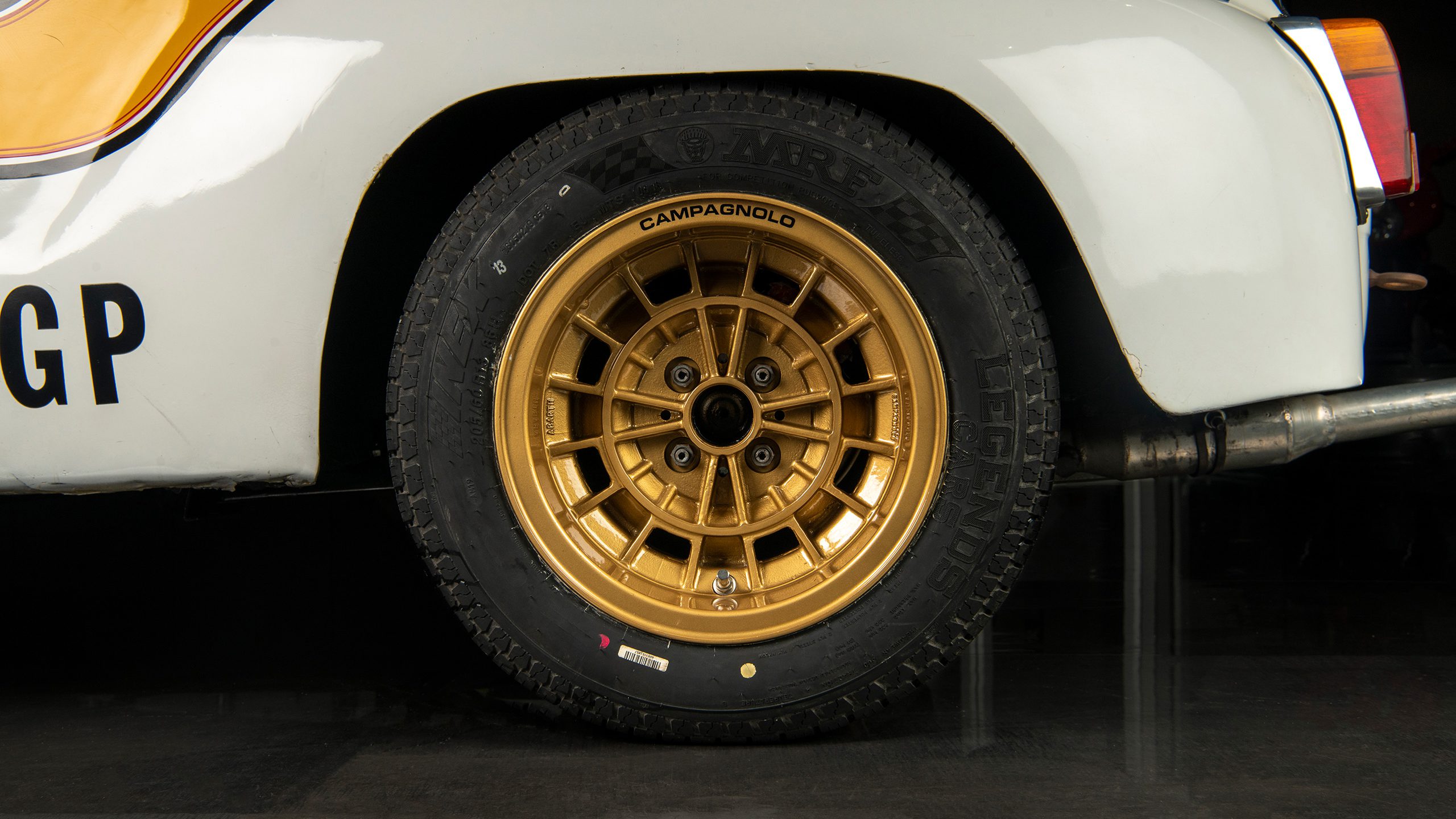 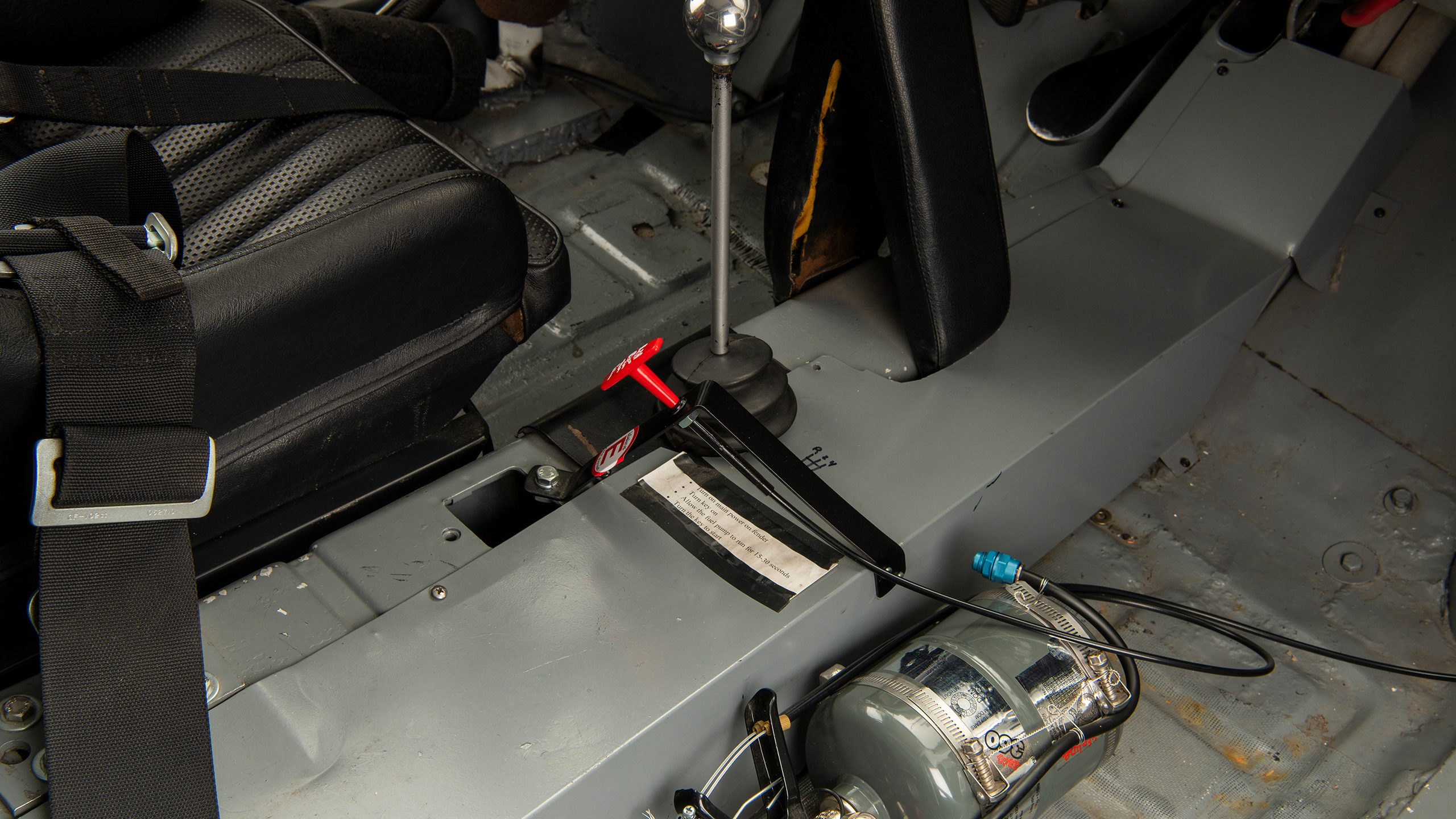 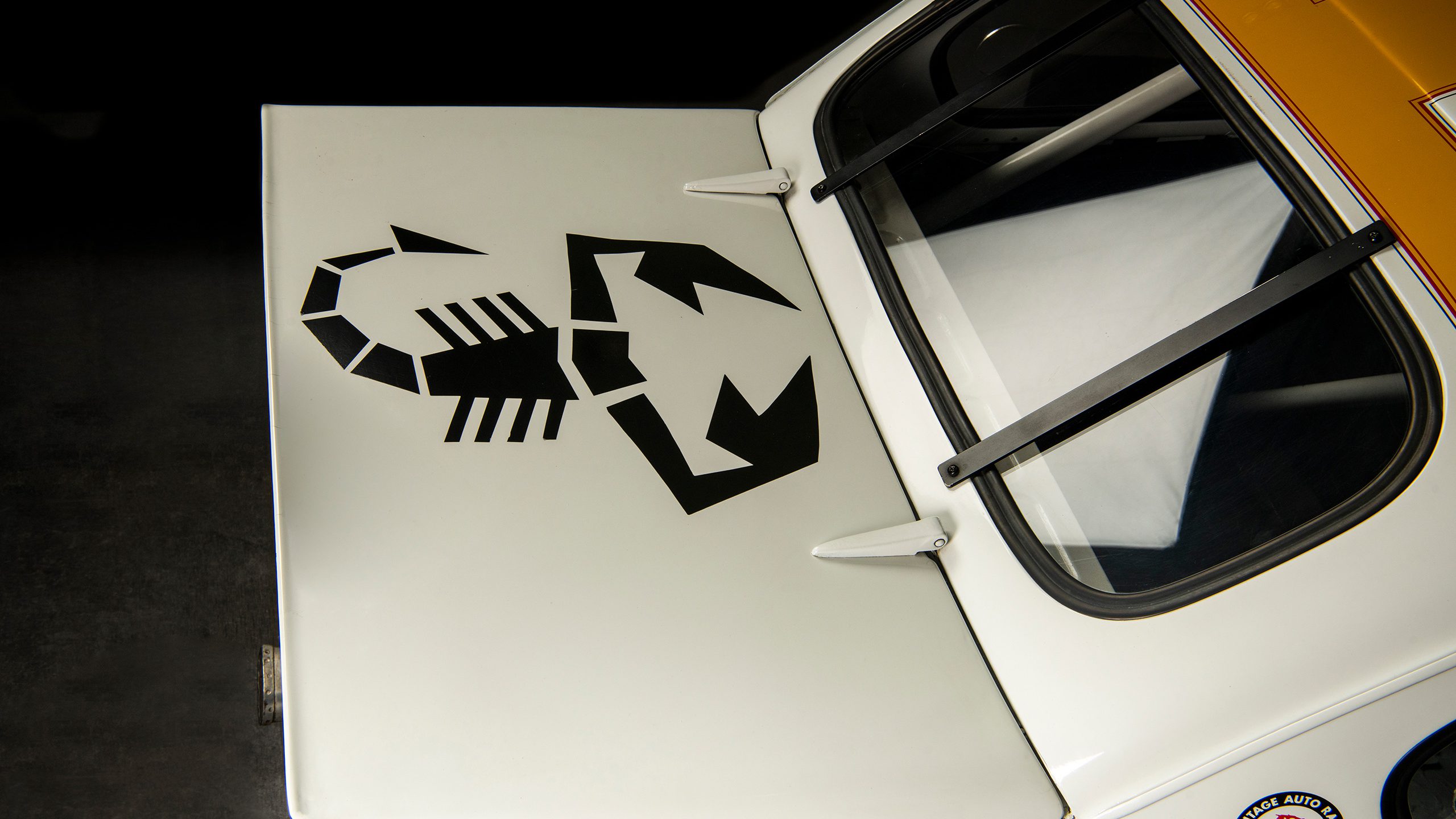 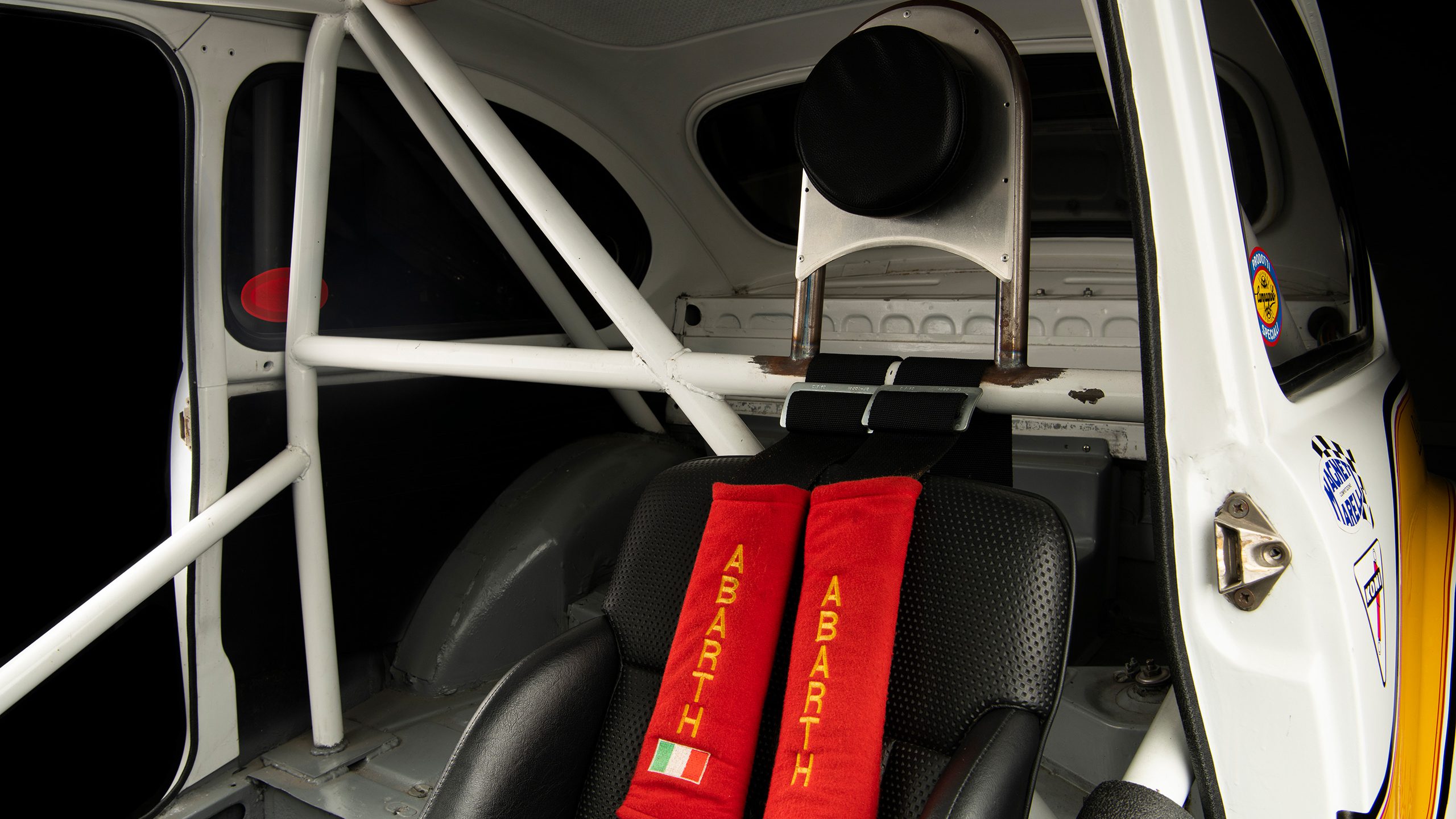 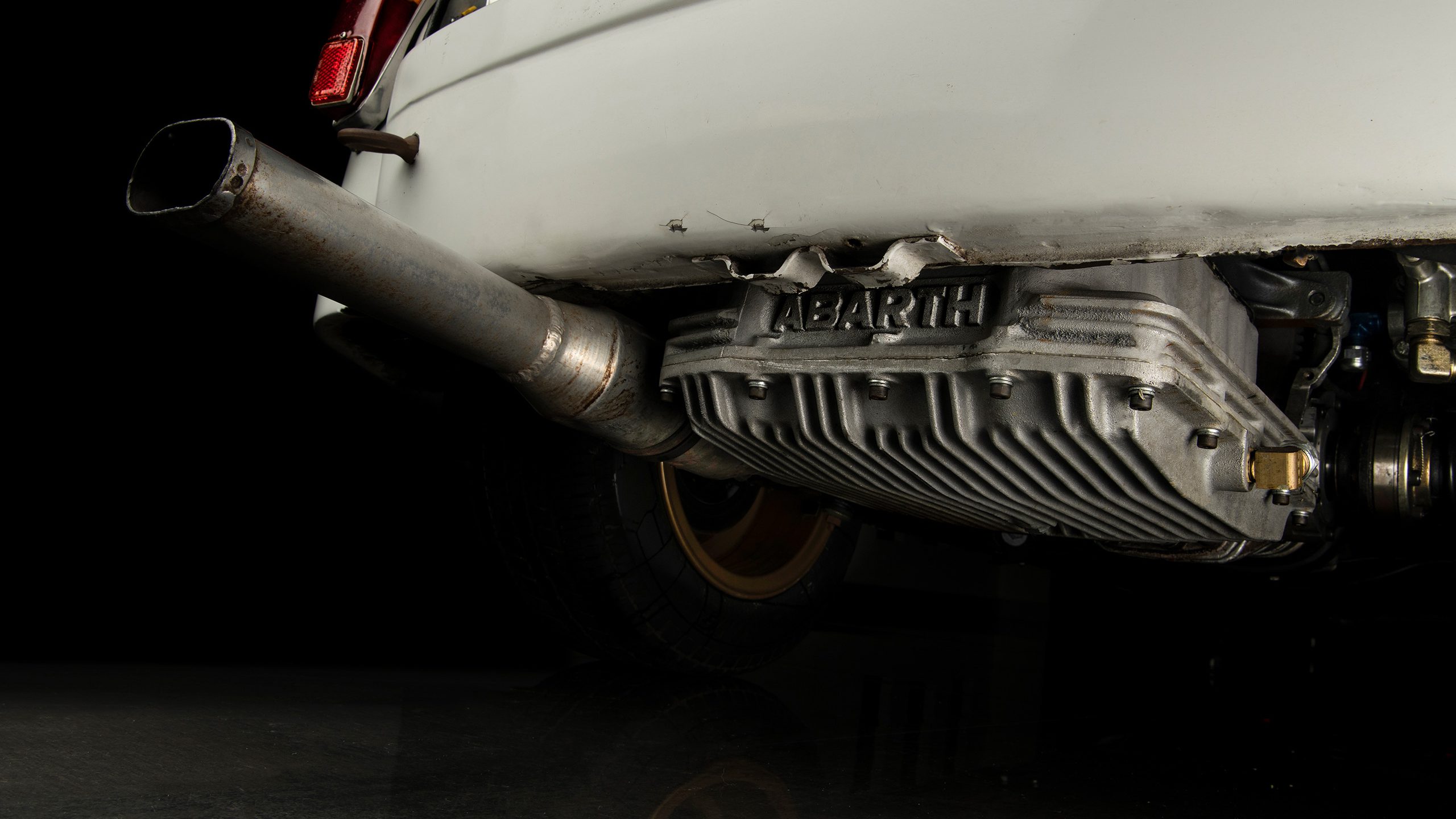 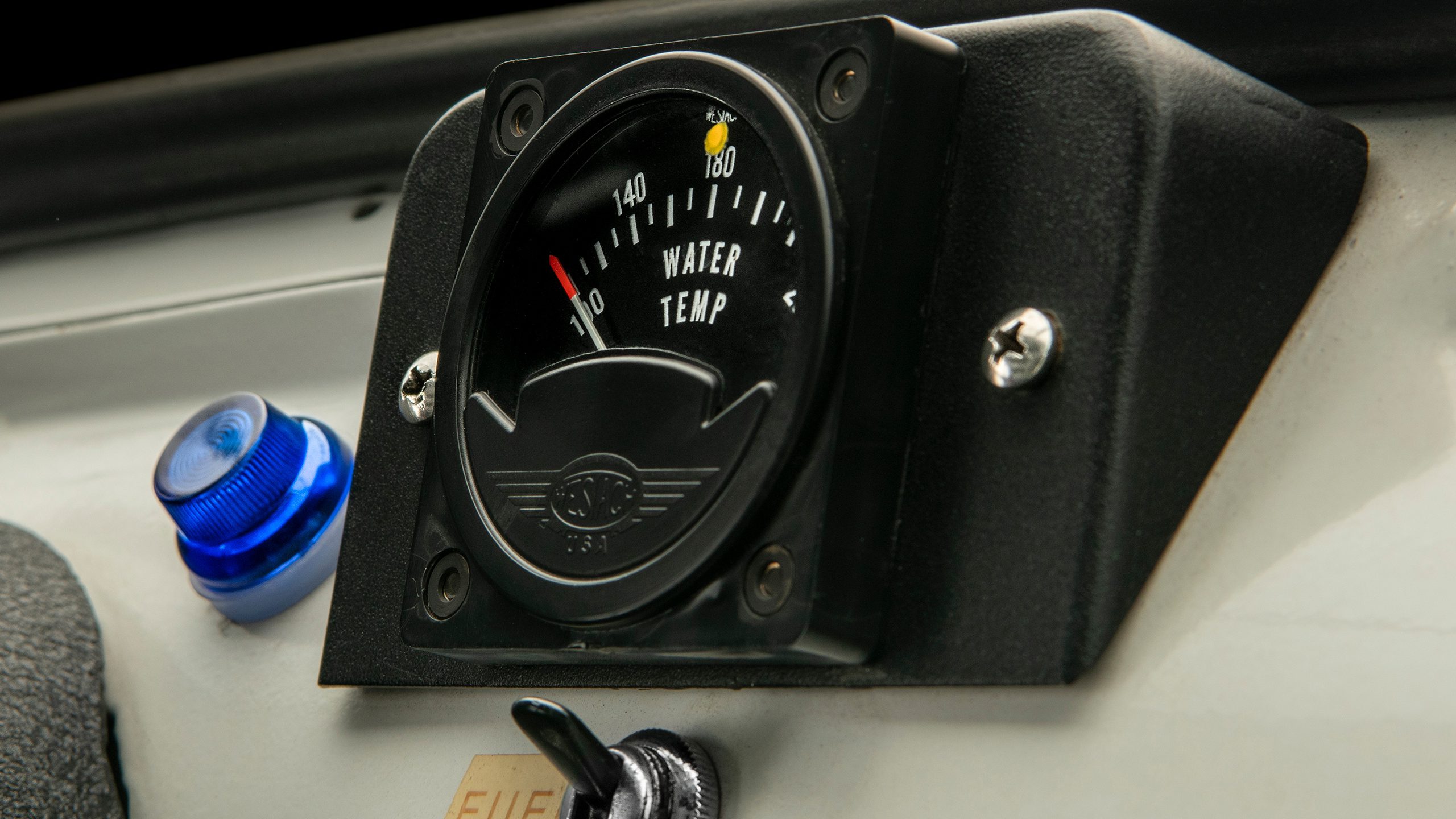 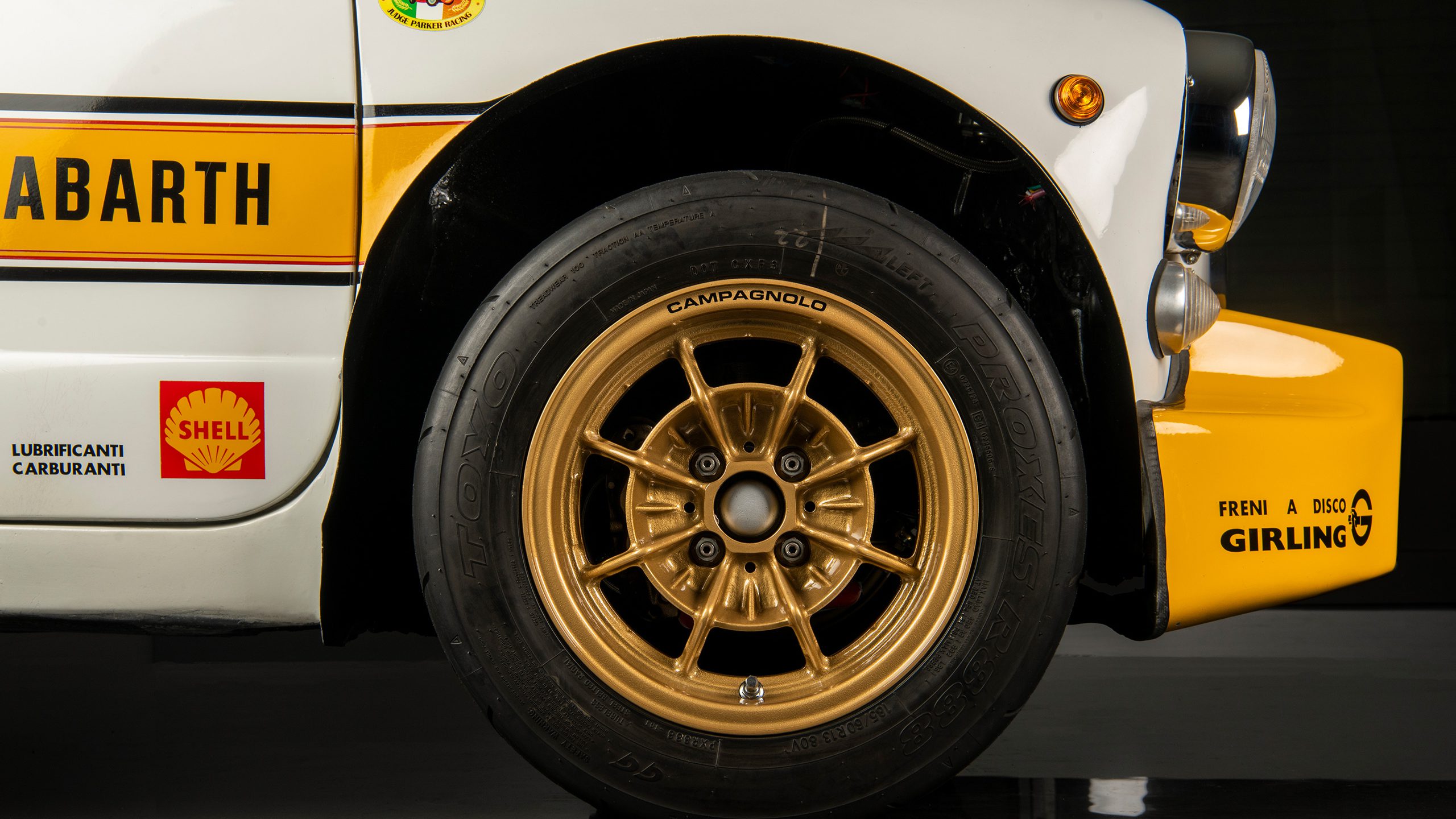 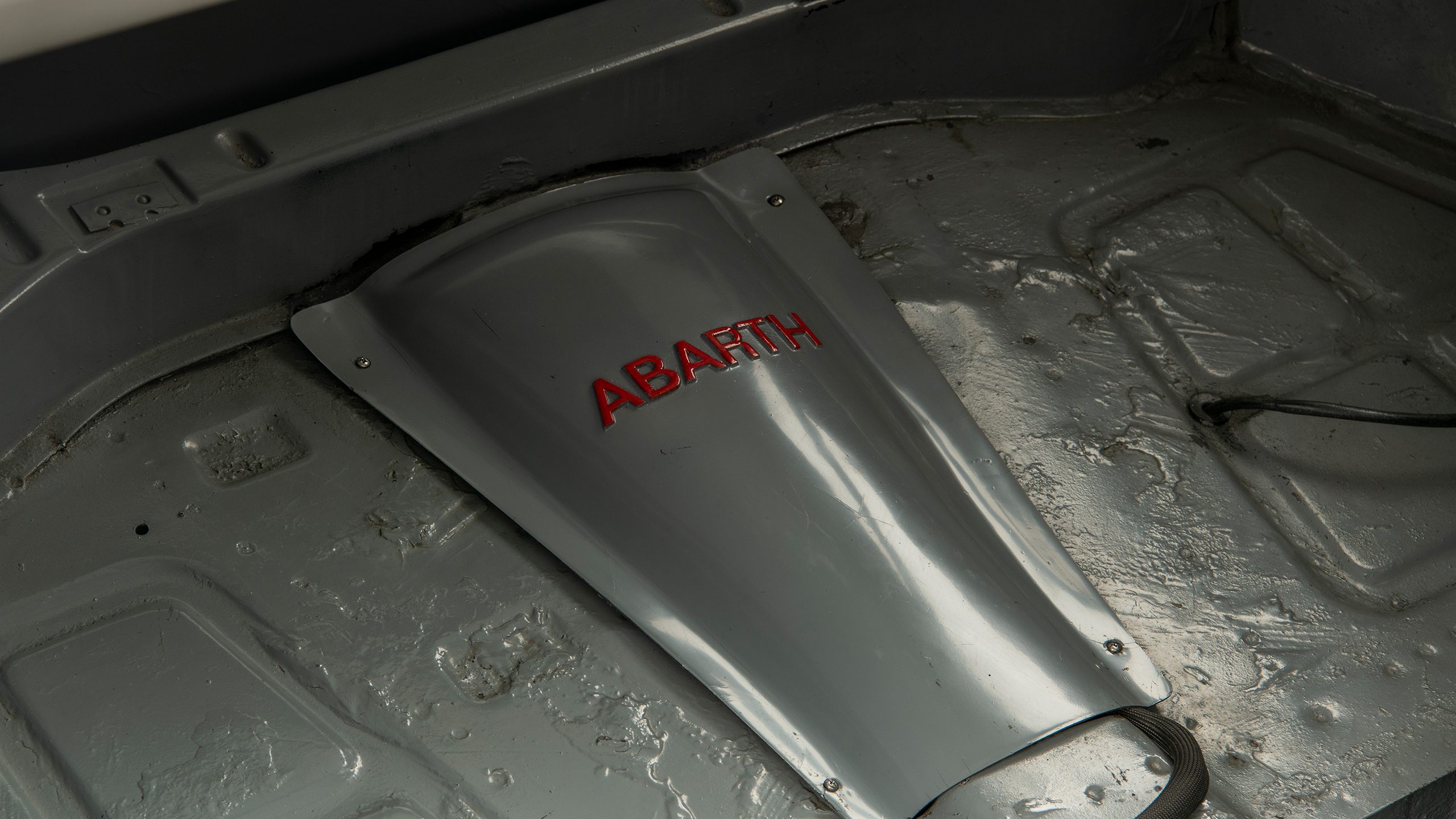 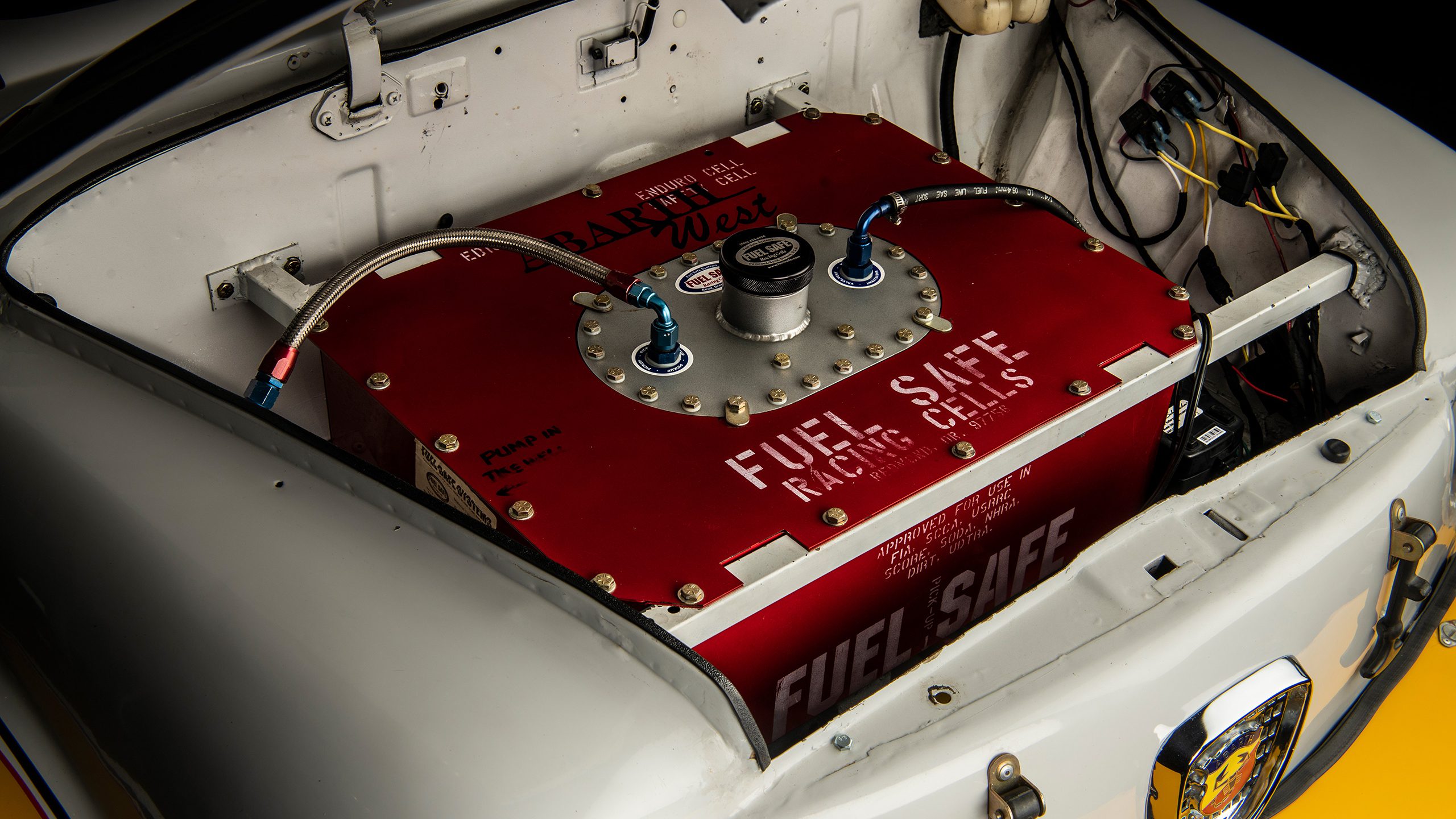 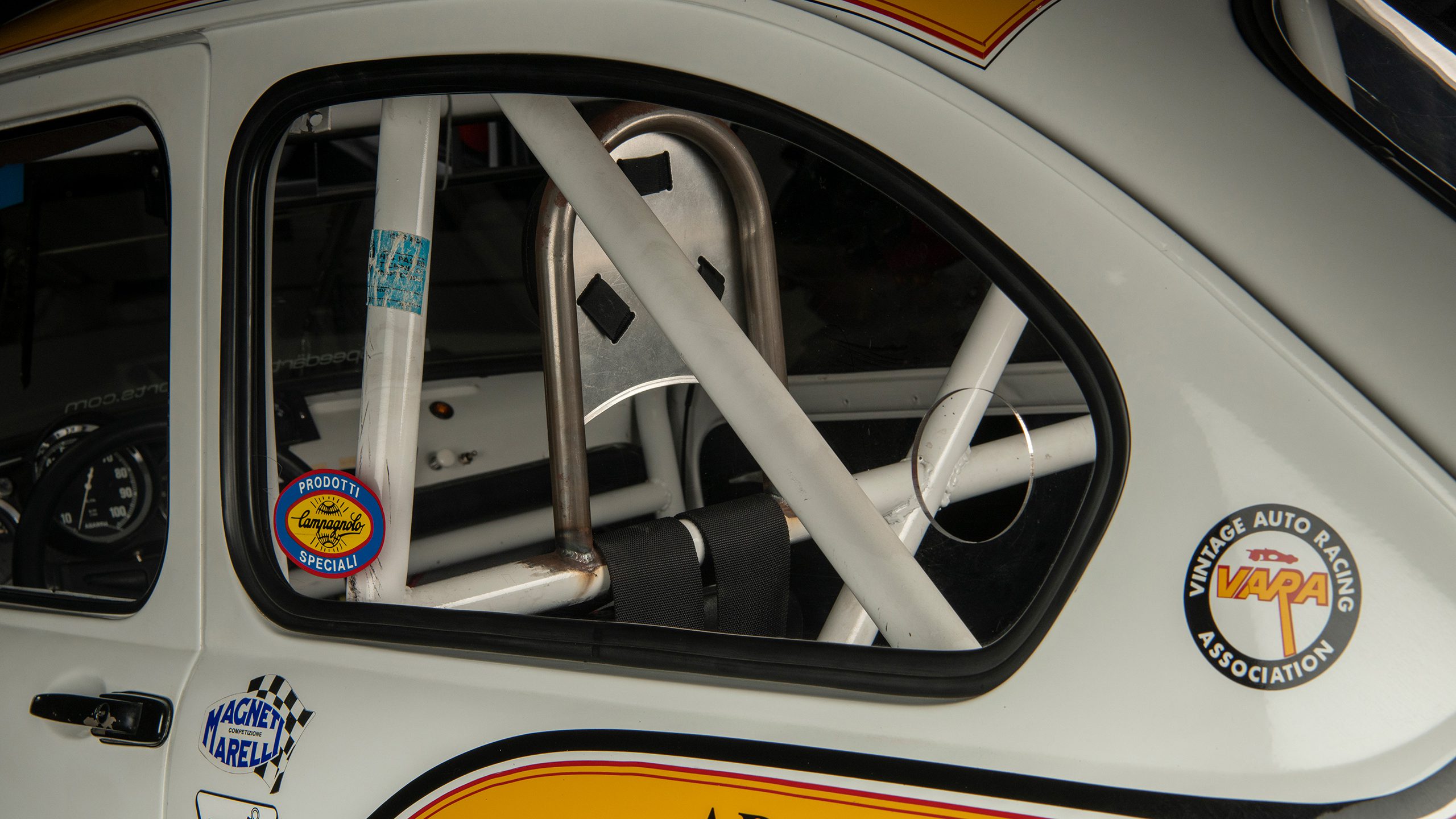 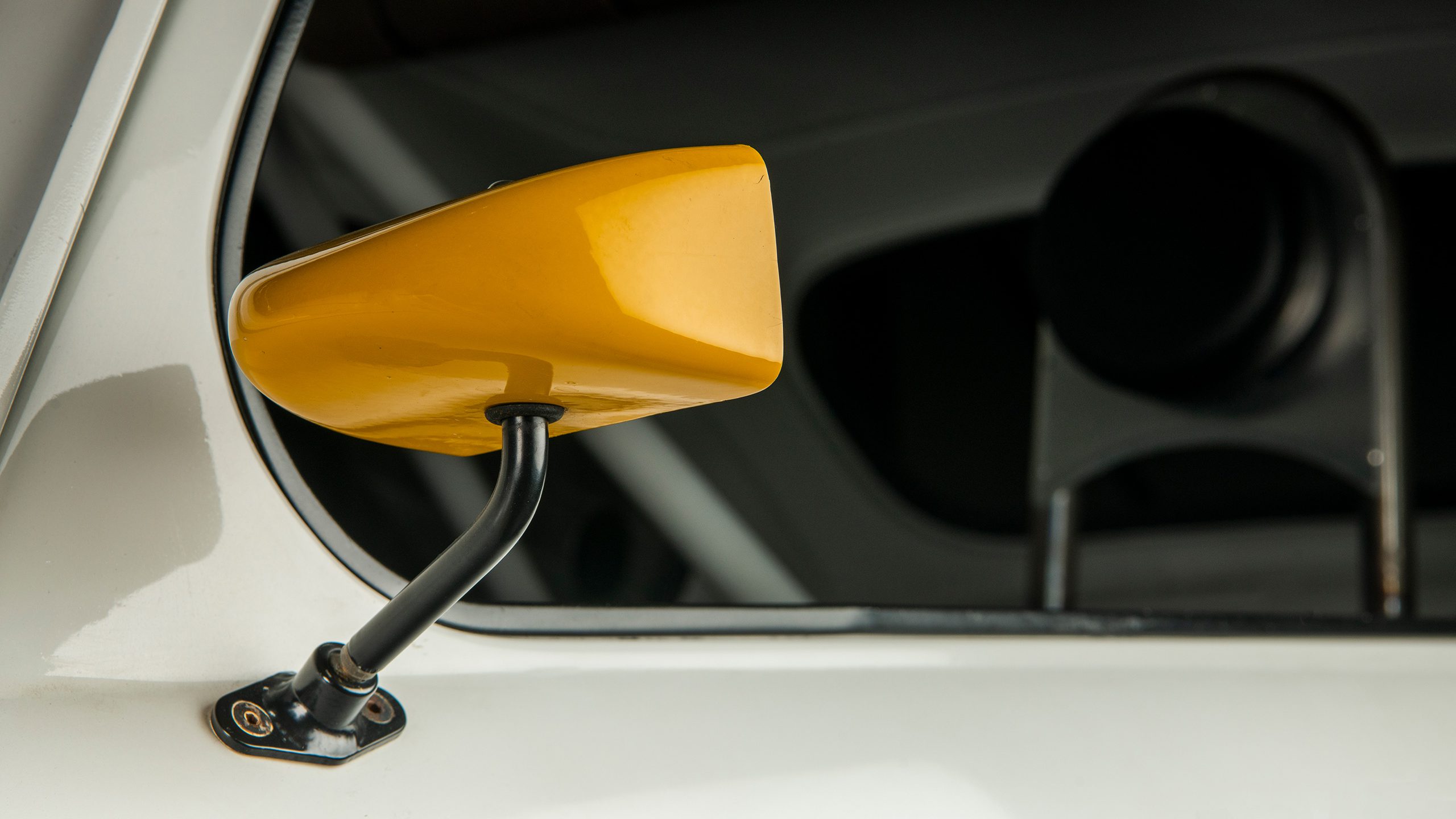 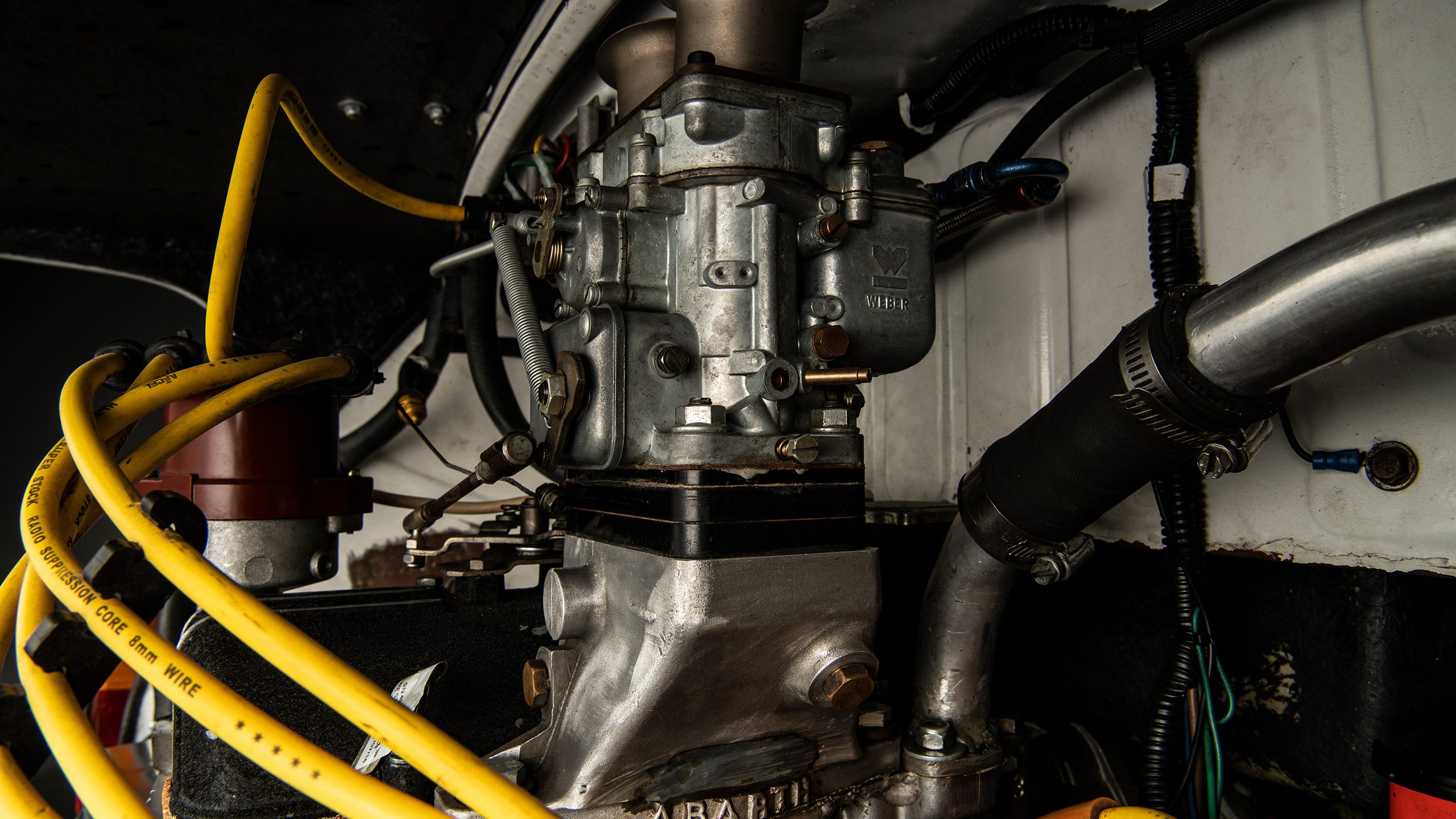 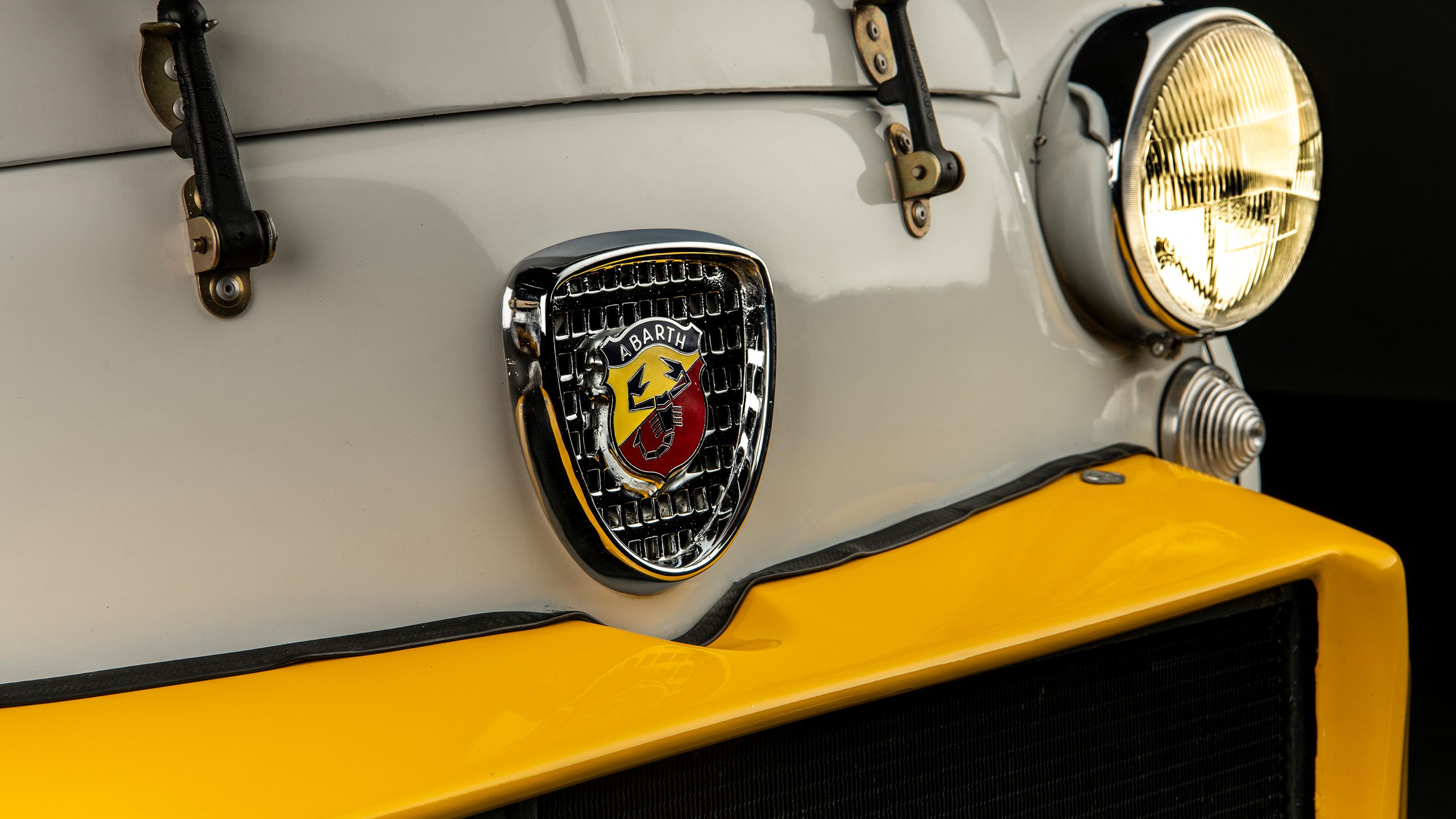 “The Abarth reputation as a ‘Giant Killer’ was cemented on the racetracks, rallies, and hill climbs of Europe and America. Solidified when the funny-looking, but potent, little FIAT sedans stormed to class wins and group championships in event after event. The 850TC, for ‘Turismo Competizione’, boasted an 847cc Abarth tuned engine. Then came the 850TC Nürburgring Corsa with additional power and the large front-mounted radiator. This, combined with the propped-open rear engine lid, gave this series of cars their very distinctive look. Next up was a further development of the block to 982cc, which gave birth to the 1000TC. Running against the Mini Coopers in the D Sedan class, they proved a formidable adversary. In fact, they ended up being banned from SCCA competition, such was their record! ” – SCM

When people think about Italian racing cars, they almost exclusively imagine Ferraris and Maseratis — even Alfa Romeos. In short, they picture relatively large, snarling examples of exotic engine technology powering svelte alloy bodies mounted on hand-built chassis and suspensions. This scenario is only partly right. The vast majority of Italian racing automobiles (by number, if not reputation) of the past 70 years have been tiny, obscure and weird.

From Cisitalia through Giannini and Moretti and on to Abarth, they have been mostly Fiat-based, limited-production, almost-specials — cars that are more cute than fearsome. They have embodied the post-war Italian reality and personality: limited by government, taxes and pocketbook — but still determined to charge flat out down the road with as much speed, style and verve as possible.

The humble Fiat 600D people’s car hardly seems like a racing machine, but in Italy, anything with an engine was a race car, and the light, tunable Fiat made a perfect platform for Abarth’s magic touch.

Abarth started building 600D-based performance cars in 1960 with the 850 Turismo Competizione, or TC. Its enlarged 847-cubic centimeter engine produced 52 horsepower and a 92 mph top speed, and it included a stiffened suspension, disc brakes, and other improvements. A successor, the 850TC Nürburgring Corsa, added more power, and it debuted a front-mounted radiator and raised rear decklid that came to be synonymous with Fiat-Abarths.

The Fiat-Abarth 850s were highly successful, from Monte Carlo to the SCCA. They were so successful that Abarth turned to the larger 903-cubic centimeter engine for the Fiat 850 and began building cars to compete with the ubiquitous Mini. These Fiat-Abarth 1000s came in a wide variety to suit different race requirements, and Abarth built multiple series with differing specifications between 1962 and 1970.

This Fiat, chassis 1667, was found in Paso Robles, California. In the recovery, many of the original parts remained intact, while others were sourced and acquired to complete the Abarth’s restoration. With the help of Abarth’s former East Coat distributor (and Abarth Guide author) Al Cosentino, who had been trained by Carlo Abarth himself, the car was treated to a sympathetic two-year restoration, and it soon became a fixture at historic races on the West Coast and Southwest, as well as a competitor in the SCCA Solo G-Prepared. This is a little ironic, as SCCA considered the 1000TC Berlina Corsa to be too dominant, and they kicked the model out of competition in 1971. In 2012, the car received a new 1,050-cubic centimeter Abarth engine that has not yet been on the race track, but it is said to deliver 110 horsepower at the 8,000 rpm redline, which is right at the limit for a naturally aspirated 1000. For racing enhancements, an Abarth five-speed with a limited slip, an oil cooler, Koni shocks, Girling disc brakes, and fitted Campagnolo Abarth wheels were added to complete the Abarth’s performance package. A detailed logbook that documents its race history accompanies the vehicle.

The original 1967 instruments can be seen in the factory binnacle, while a few additional modern gauges to monitor all engine systems have been sensitively mounted atop and below the dashboard. This Fiat Abarth remains a potent racing weapon, having recently been run in VARA events at Las Vegas and Buttonwillow as well as in HSR events at Las Vegas and Phoenix. It has been the winner of the Phoenix Historic Festival “Mini Cooper/Abarth/Lotus Challenge” three consecutive years, and the previous owner stated it to be “the fastest Berlina Corsa on the West Coast.”

Speedart Motorsports is pleased to offer for your consideration this weapons-grade Abarth racer, in its yellow and white livery, that will attract admirers in any context, be it race or show. But the most fun comes on the track, discovering how this car performs and showing why Fiat-Abarth 1000s have been such intense competitors for over 50 years.